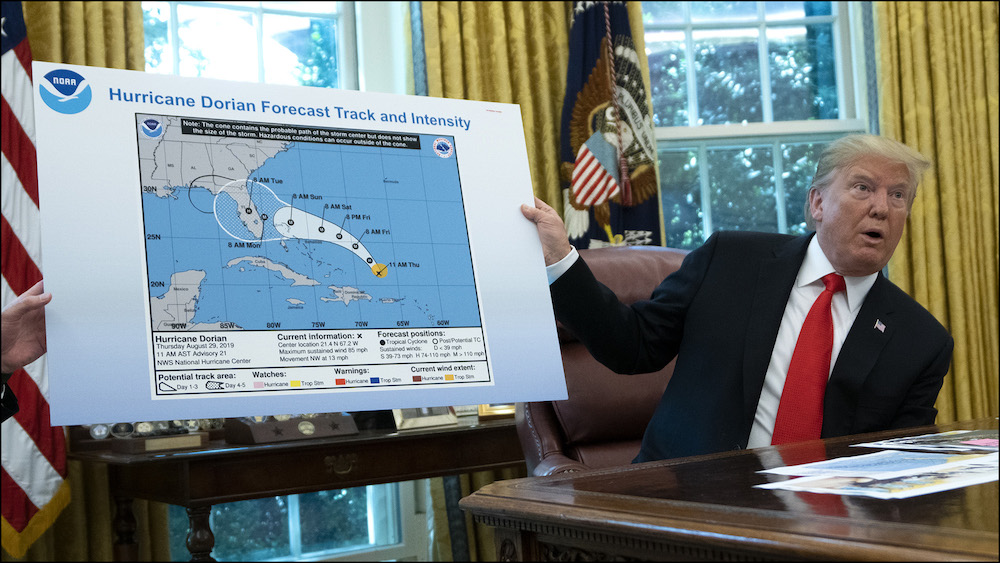 As Hurricane Dorian was churning towards the east coast of the United States, Trump did a very Trumpian thing- he made a mistake and then he pretended he did not make a mistake.  He had been golfing with his buddies in Virginia and maybe he wasn’t really paying attention to his briefings when aides told him what was going on with the storm (although he claimed he was foregoing a trip to Poland to closely monitor the storm).  For whatever reason, Trump did not know the up to date accurate information about the path of the storm.  He tweeted that it was heading for Alabama and the state could be hard hit when that state was, in fact, not in the path the storm.  At all. The projected path of the storm was tracking up the Florida coastline at this point in time and curving up the eastern seaboard.  Trump was fact checked almost immediately by the Alabama Weather Service tweeting on Sunday, September 1st, that Alabama was NOT in the path of the hurricane.

So, no harm no foul?  Not really.  Because what happened next tells you why Trump’s mistakes are so dangerous for all of us.  He doubled down on the misinformation.

People make mistakes all the time.  Even presidents make mistakes.  But Trump CAN NEVER EVER admit he made a mistake.  True to form, Trump doubled down on his assertion that Alabama was in the path of the storm.  And then he had a press conference on September 4th, four days after his “gaffe”, in which he produced an official NOAA weather service map showing the path of the storm but, guess what? someone had mysteriously added a black sharpie marker line extending the cone of the hurricane into the lower part of Alabama.  Now who could have drawn that on the weather map?  Well, let’s see… who uses big black sharpie pens to sign his executive orders?

Trump was immediately questioned by reporters in the room who could see how the black sharpie bubble line that extended into Alabama did not look like the white line designating the path of the cone of the hurricane on the widely available official weather map.  It was pretty darn obvious that that line had been added on.  And did Trump confess to his misdeed then?  Nope.  He claimed he did not know who drew the black line on the weather map.  He defended himself and said that there was a map that showed Alabama could be in the path. Then his team produced an outdated map from August 28th that the Florida Water District had put out days before the updated information about the storm’s path was available.  Bloomberg News blew Trump’s cover by reporting that Trump was in fact the one who drew the black sharpie bubble line on the NOAA map to make it look like Alabama was potentially in the path of the storm.

Look, it’s actually illegal to misrepresent information on a weather report.  It is a criminal offense.  You can be ordered to pay a fine and go to prison for 90 days.  And for good reason.  A lot of people rely on the accuracy of these reports to take shelter, protect their businesses and keep their families safe.  It is beyond sad that Trump cares more about saving face than about being truthful.  Trump creates his own self-serving reality and then insists that everyone else buy into the fantasy he puts out there as the truth.  He flagrantly disregards or assaults the truth by claiming the free press is fake news on a daily basis, when he is the one serving up his own version of reality that his followers seem to naively swallow hook line and sinker.  Many of them do not think he lies at all, even though he has lied about material things some 12,000 times since taking office.  Really, you guys?  Can’t you tell he is lying to all of us?

Why does this matter?

Because we need to be able to trust that our president is telling us the truth and Trump cannot be trusted to tell us the truth.  Full stop.

The whole world gets that about him now.  The global economy appears to be contracting in part because Trump cannot be trusted or relied on.  He says one thing and then contradicts himself over and over again.  When he was at the G-7, for example. he said trade talks were being discussed with China.  Then we learn from the Chinese and from Trump’s own aides that there was no such discussion at that time.  In that instance Trump lied to manipulate the markets to go up again.  He got the markets to go up, but what he did was illegal.  Can we trust Trump to tell us the truth?  The answer is no.  He will put himself and his own interests above those of the country every time.  He has absolutely no compunction about lying to us to save face or claim a reality he wishes were true that is not true.

And one more thing.  The fact that Trump had to double down and repeat that he was right, doctor the weather service map, and pretend he did not know who had drawn that suspiciously self-serving black sharpie bubble line extending the path of Dorian into Alabama, tells us there is no one left in the Oval Office with the guts or the courage to tell Trump he is being stupid and that he should just let it go.  The grown ups and the Trump minders are all gone.

I am not the only one who thinks Trump is going downhill mentally.  He obsessively clings to and returns to whatever is bugging him.  He is not able to let go of something that he thinks is demeaning or humiliating when he needs to move on.  If he wants the media to stop covering this story he needs to stop tweeting about it.  He could have prevented this story from getting any traction at all by simply saying he made a mistake.