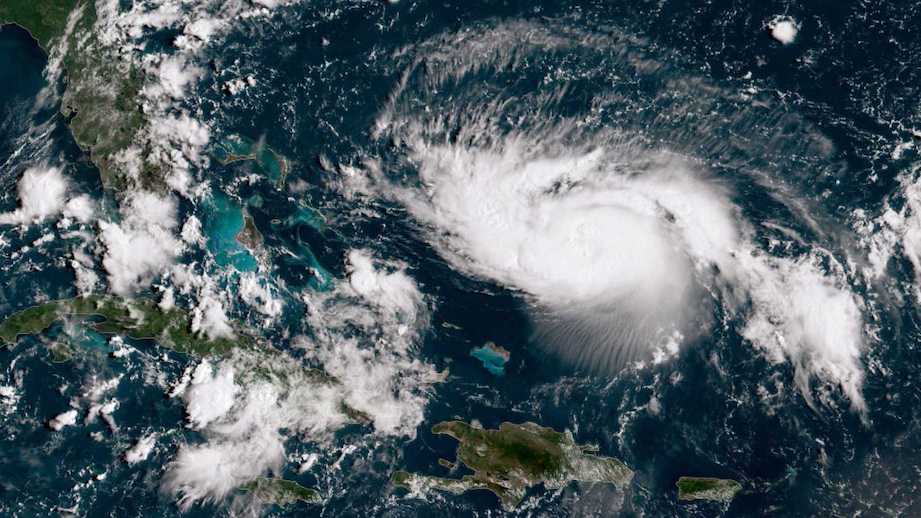 Natural disasters are more common now that climate change is ramping up the amount of humidity in the atmosphere, and there are higher levels of heat both across the land and in the oceans, glaciers are rapidly melting at the poles, in Greenland and Iceland, the Amazon is on fire and parts of the Arctic are also.  But Trump is a disbeliever.  He thinks climate change is a hoax.

Maybe Mother Nature is trying to tell him something.  Something really important that he is not listening to. Mar a Lago is currently close to the path of this hurricane barreling for the east coast.  Dorian has been upgraded to a category 4 storm with winds expected to be up around 140 mph.  This massive storm was the most likely reason Trump cancelled his trip to Poland, although it is common knowledge that he does not like to travel overseas anyhow.

Mar a Lago is closed for the season right now, but it is one of Trump’s homes.  As we know, Trump is feeling attacked in many ways right now as his poor decisions and bad judgment results in more and more problems at home and abroad.  The economy is becoming a big problem for him. Remember how sure he was that trade wars are easy to win?   They turn out to be not so easy.  Especially when the Chinese have no incentive to come to the table and, after being insulted and bullied by Trump, every reason to want to make Trump sweat.  Trump will need to beg on his hands and knees to get the Chinese to give him a deal before the election in 2020.  If Trump lies about getting a great deal with China, the way he lied about China coming to the table to get the stock market to rally last weekend, the farmers in our country know the truth because they have lost their relationships with buyers and many will lose their farms as bankruptcies skyrocket- they are already growing rapidly in the same parts of the country Trump needs to win again.  Even the money Trump promised to pay off farmers to ease their pain is not being dispensed effectively.  And Fox News is turning on him too.  Neil Cavuto of Fox News gave Trump a tongue lashing for saying Fox should only say things that he, Trump, wants them to say.  Cavuto reminded Trump that Fox News does not work for him.  And then Cavuto blasted Trump for multiple lies and misinformation that Cavuto set the record straight about. Watch the clip:  https://www.youtube.com/watch?v=Q644cFgoGV4

Trump is losing his bearings at times these days because he is under pressure.  He is saying one thing one day and something different and contradictory the next day.  As a bona fide malignant narcissist, he is becoming predictably more untethered to reality than before, and he was never that tethered to begin with.  Now this hurricane is heading towards his home in Florida.  Well, maybe the universe IS trying to get something through that thick noggin of his.

Even if the storm does not directly hit Trump’s property, it should serve as a warning to him that climate change is real, not fake news.  Who knows, maybe this is a message from the Almighty as well as Mother Nature.  You never really know how God will convey information to earthlings. God has allegedly tried to educate misguided human-kind in the past by coming up with plagues and turning some corrupt people into pillars of salt, according to biblical scholars.  God works in mysterious ways.

Whoever or whatever is sending this message to Trump, he should listen.  Because the message is clear.  Trump needs to stop loosening rules and regulations that limit methane gas emissions which are add to greenhouse gases that are heating up our planet, stop standing by as the Amazon rain forest burns uncontrollably, stop his plan of allowing logging in the Tongass Alaskan forest that protects our environment from high CO2 levels, and rejoin and participate in the Paris Climate Accord and global efforts to curb climate change impact.

Trump!  Are you listening?  Hurricane Dorian is your wake up call!!   Even if you only care about yourself and your money, your golf properties, your home in Florida, and your re-election bid, all of these things of yours are going to be affected.  Mother Nature is trying to tell you something important, Donald Trump.  Listen Up.