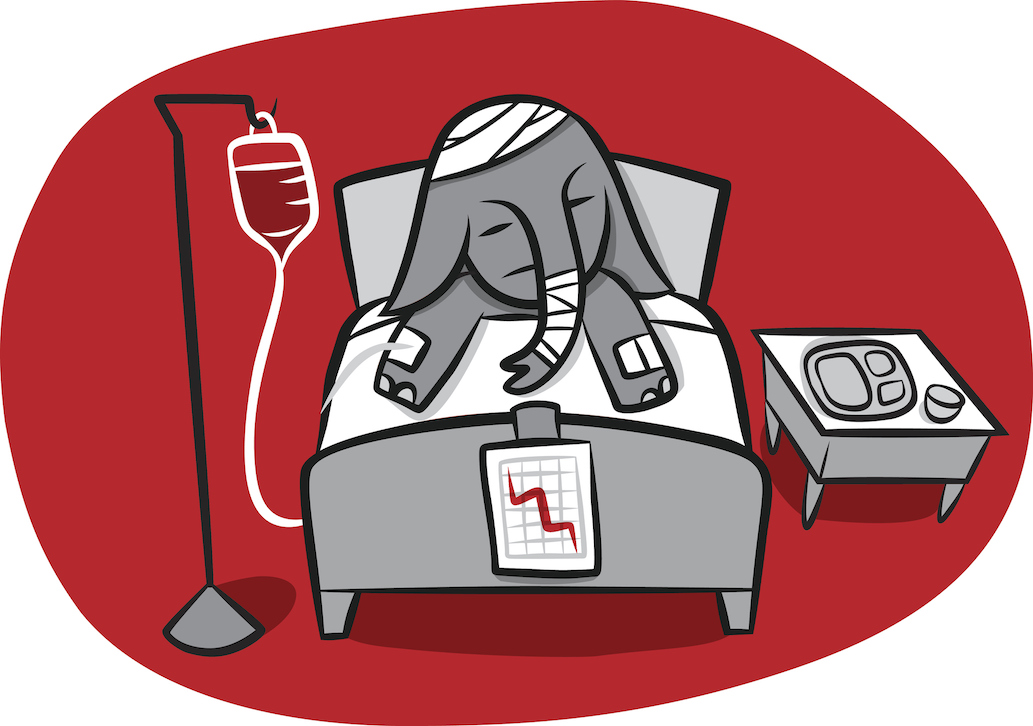 RIP GOP is the title of a new book by Stan Greenberg.  The Republican Party is a fully owned subsidiary of Trump at this point.  He has branded it and he owns it.  And, Greenberg says, that will eventually spell doom for the GOP.  This is the main message of Greenberg’s book.

How is Trump torching the GOP?  What is going on that will end up deeply damaging or killing off the Republican Party?

Here is the short answer: thanks to Trump’s polarizing and highly partisan approach to politics, the Republican Party is shrinking from a party that appealed to a broader group of people in the suburbs and in rural America to a party that is more and more rural and populated by low information white males who are more senior.

Many people seem to think there is a 50/50 split between parties- Democrat and Republican.  That is not the case.  31% of the electorate identifies as Democrat, 24% say they are Republican, and 42% are Independents (Gallup) who might lean towards one party or the other.  The number of people who say they are Independent voters is the largest group and this group is growing, mostly from the ranks of former Republicans as we approach 2020 but some Democrats are choosing to be Independents as well.  Most people think that Trump’s base represents about 50% of the electorate. It does not.  It is about 24% of the electorate.  That base is not enough for Trump to win re-election assuming the more diverse and far bigger anti-Trump portion of the electorate shows up to vote in comparable numbers in 2020 as happened in 2018 resulting in the huge House win for Democrats.

At this point in time 6 out of 10 Americans say they do not think Trump deserves to have a second term.  That’s 60% of Americans.  Trump’s approval ratings with Americans have taken a 6 point dive in recent polls and that may go lower now that he faces impeachment.  He was in the high 30’s to low 40s before the impeachment inquiry began.

The reason for the shrinking base of the GOP is obvious.  Trump has insulted, denigrated, tweeted at, attacked and demeaned numerous groups of Americans including blacks, Hispanics, other minorities, women, and LGBTQ people.  This is not the way to grow support and woo the much needed Independent voters in swing states you must have to win national elections.  His mean spirited approach to immigration and his vulgarity are a turn off to increasingly large numbers of women both in rural and suburban areas of the country.  Trump never pivoted to become the president of all Americans.  He continued to represent only the base that loves him and will already vote for him no matter what he does.

The Republican Party no longer even pretends to appeal to a broader demographic of the American electorate beyond Trump’s base, but that’s a huge problem.  Why?  Because a more diverse electorate is the new emerging America that will soon be the majority in this country and even now represents a larger slice of the electoral pie.  The GOP is losing college educated white male and female voters in the suburbs, voters of color in the cities, and most recently, white women without a college education in the more rural areas of the country.  Even after an assessment done by the GOP itself before Trump was elected that warned the party to expand its base to be more inclusive of groups that are the growing demographics in America, including Hispanics, blacks and other minorities, Trump has done nothing but double down to lock in his already fully attached base.  Trump’s base, while extremely loyal, is mainly composed of non college educated low information older male white voters, a group that is going to disappear in the coming years.  No one lives forever.

Many suburban conservative Republicans, both men and women, feel abandoned by Trump’s GOP which helps explain how Democrat Dan Mc Cready did so well in the recent North Carolina race in a suburban district.  He did not win, but the Charlotte suburbs used to be so red a Democrat had no business even thinking he could win.  There was a 10 point swing away from Republican to the Dems in the suburbs of Charlotte.

Many suburban Republicans no longer align with Trump’s GOP.  They are migrating silently away to Independent voter status and often voting Democratic when the choice has to be made.  Republicans who are still willing to call themselves Republican are getting winnowed down into a smaller and smaller demographic that is ever more aligned, and supportive of all things Trump.  No one should be surprised about Trump’s high approval ratings with Republicans.  All those people who are willing to say they are Republican anymore support Trump at higher and higher levels of approval.  Expect nearly 100% approval of Trump from remaining Republicans as the base shrinks. Those folks who love him the most will compose the hard baked remainder of the shrinking GOP.

Trump and the GOP are also in trouble because the economy is showing signs of slowing down, a potential recession is looming, the tax cut did not help the little guy, health care has not improved for too many people, the trade war is costing American families about $1000 more out of pocket this year alone as the cost of goods from China goes up, Moody’s has published it’s assessment that 300,000 American jobs were lost because of Trump’s trade war, Mitch McConnell, doing Trump’s bidding, is not acting to pass gun control legislation that a majority of Americans are demanding, Trump’s lies and tweets are a turn off for many Americans who started off willing to give Trump a chance but can now judge him based on his track record.  Even if this bad news for Trump and the GOP is somewhat offset by the number of jobs available to people with the right skills, those new jobs numbers are also going down.

Even more important is that Trump himself is acting ever more erratically, bizarrely and impulsively as he experiences rising pressures on him, and understands his dire situation when it comes to re-election and fall out from his now exposed attempts at mafia style extortion of the Ukrainian president using allocated congressional funds to force Zelensky to manufacture dirt on his political rival, Biden.

When history writes this chapter about America, Trump will be known as the chaotic, fake news spewing “reality TV” president who damaged relationships with our allies and failed to craft any meaningful agreements with our enemies or our friends, failed to act to protect Americans from climate change and gun violence and not only did not drain the swamp, but led the most corrupt administration in our nation’s history.  He is only the fourth president in our nation’s history to be the subject of an impeachment inquiry.  300 former intelligence officials joined to write and publish a letter in support of the impeachment of this president. because he poses a national security danger to our country.  These signers served in both Republican and Democratic administrations.

The big question for the GOP in hindsight after 2020 will be why they thought there would be enough Trump voters left to vote for Trump as compared with the growing number of disappointed former Republicans, agitated Democrats and turned off Independent voters, men and women who are repelled by him and his policies not to mention his offensive and exhausting tweeting and lying.  In the most recent polling 69% of voters do not like Trump as a person. That is almost 70%.  That’s a lot of people who do not like him.  This impeachment inquiry is gaining approval (approval of impeachment shifted 10 points in only three days in most recent polling), Trump is not growing the Republican Party.  He is only keeping it on life support.