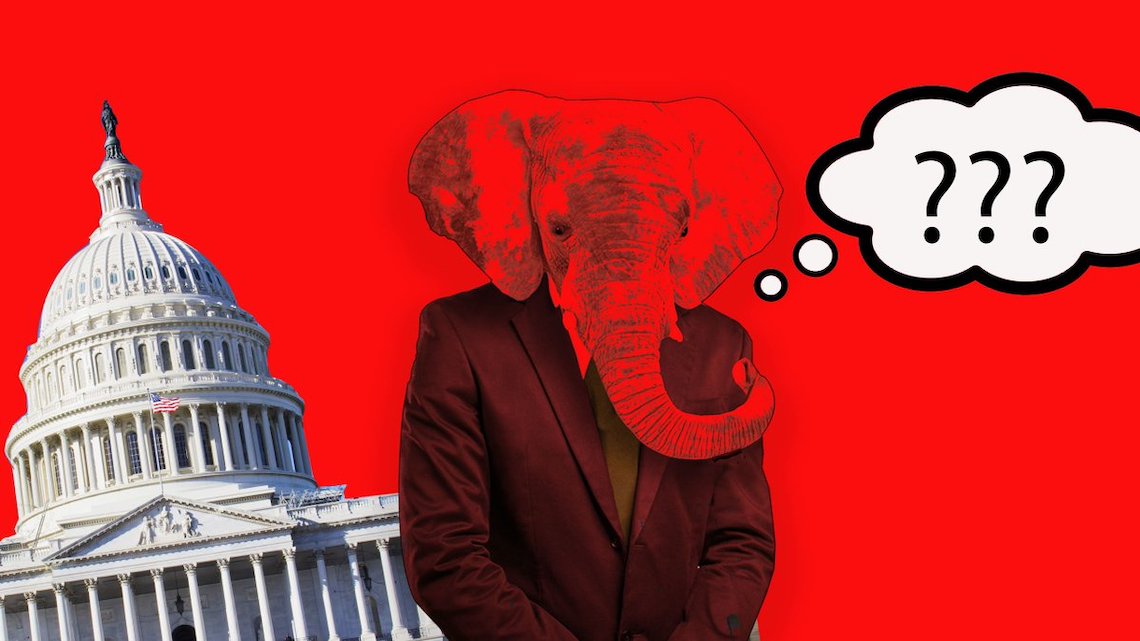 For months and months now commentators tell us it is extremely unlikely that Trump would ever be impeached by the House and expelled from office by the Senate because the Senate would not have the votes to expel.

Why?  Because, they say, the Senate must have 20 Republican votes to expel:  47 Dems and an Independent to convict have to be joined by 20 Republicans to make 67, and that will never happen.

But that’s not totally accurate.

Trump could be expelled from office without 67 votes.

Trump could be expelled from office without 20 Republican votes to expel.

Trump could  be expelled from office with NO Republicans in the Senate voting to convict him.

The Constitution and the Senate Rules of Procedure and Practice in the Senate When Sitting on Impeachment Trials give us guidance.  These rules governing impeachment trials were revised  pursuant to Senate Res 479,99-3, August 16, 1986 to provide more guidance about how an impeachment trial should proceed.   It says that removal from office by impeachment takes 2/3 of the Senators present for the proceeding.  The key word is “present”.  People have been assuming that the entire Senate must be present at the time of the vote to expel.  Not according to the Constitution and Senate Rules.

Many Republicans could be absent instead.

According to Laurence Tribe, professor of constitutional law at Harvard Law School, this scenario might come to pass.  At least 30 Republican Senators have already told Senator Flake that they wish they could get Trump out of office but don’t want to vote to convict Trump.  But what if they were absent instead?  Some might even claim the whole proceeding is bogus and a farce or they could say they are “boycotting” the proceeding or mysteriously fail to show up. The result would be the same.

If 2/3 of the Senators present voted to expel Trump from office, that would satisfy the Constitutional requirement to convict.  Let’s say 30 Senators are absent when the vote is taken, that would leave 70 Senators present.  2/3 of 70 is 47 which is exactly the number of seats Democrats and Independents currently hold in the Senate. There would need to be quorum.  At least 51 Senators need to be present to have a quorum.

This scenario might be more palatable to some Republicans who want Trump out but cannot bring themselves to vote him out.

The case against Trump is getting stronger and stronger and the need to remove him more pressing every day. From what I hear from lawmakers I have spoken with who are in the room where the depositions are being taken, Republicans are behaving in a thoughtful, solemn way and are listening carefully to the testimony.

Trump has increased the chances that he will be not only impeached but removed by creating situations that cause Republicans including big donors to consider the value proposition of dumping him.  Trump is a chaotic, nutty man who is going off the rails now that he has no one in the White House who can control or contain him.  Like a teenager acting out, defying the rules and norms and assuming he can get away with everything, Trump is disturbing Republican lawmakers and donors on two key fronts that may eventually tip the scale in favor of his removal.

Trump’s impulsive reaction after a phone call with Erdogan of Turkey to remove our troops from the border and green light the Turkish led massacre of our allies, the Kurds. These Kurdish fighters helped us beat back ISIS and now we have betrayed them and their families and are allowing them to be massacred by Turkey.  Republicans are very upset about this and for good reason.  It will be a stain on our country forever and make it much harder to create alliances in the future.

Republicans like Lindsay Graham thought Trump would listen to him after playing many rounds of golf with Trump and looking the other way when Trump allied with white supremacists.  They thought the deal they had with Trump was that they could get the foreign policy and right-wing judges they wanted in exchange for letting him have his way on most everything else.  Trump has thrown them under the bus with his fateful decision to move troops that protected the Kurds. For those who say Trump is trying to end our involvement in the Middle East, why then did Trump order those same troops to Iraq to help Saudi Arabia?  Those troops are not coming home.

The evidence is already overwhelming when it comes to Trump’s impeachable offense involving Ukraine.  Trump and his aides are also blowing up whatever defenses Republicans thought they could argue.  U.S. Envoy, William Taylor, testified and has now released a statement in which he says Trump was the direct connection to Ukrainian aid being held up unless Zelensky opened up an investigation into the Bidens.  Trump is at the center of this clear abuse of power, in other words.

The president broke the law based on his own read out of the call he had with Zelensky of Ukraine and this is the kind of activity the president can and should be impeached for since it involves soliciting foreign influence for personal political benefit which is an egregious abuse of power by a president.

The wall of silence Trump uses to protect himself from public scrutiny has been broken as more and more Trump administration witnesses testify in depositions before the House.  Next week will bring more of the same. The Republicans and the White House are out of defenses.

The defense that the whistle-blower had only second-hand information is being defeated by the first-hand accounts from witnesses in their depositions before the House.  The first whistle-blower has become irrelevant as a witness at this point.

The defense that there was no quid pro quo was defeated by Mick Mulvaney, White House Acting Chief of Staff, who let the cat out of the bag in a press conference last week.  He stridently admitted that the money for Ukraine’s military defense that had been allocated by Congress, was being held up specifically by the president to coerce an investigation into a debunked conspiracy theory about a nonexistent server to prove Russia was not to blame for interference in our 2016 election.  There WAS a quid pro quo, in other words.

Mulvaney also arrogantly told everyone to, “Get over it” and claimed that this sort of politicization in foreign policy happens all the time.  (Which is not true.) Furthermore, there is no need to have a quid pro quo because it is illegal for a president to solicit help from a foreign government to do a hit job on a political rival.  Full stop. That by itself is illegal.  But when there is a quid pro quo, that opens the door to criminal indictments for extortion and bribery in addition.

Republicans do not know how to defend the president against impeachment anymore.  Mulvaney snatched away their fig leaf and now they are running around naked and defenseless.

Mitch McConnell sees what is coming and McConnell’s shift may be an important weather vane indicator of a shift in the mood in Washington when it comes to expulsion.  McConnell told his Senate GOP caucus that the impeachment trial is coming.  He outlined how the trial will be conducted.  The chief judge of the Supreme Court, John Roberts, will preside over the trial in the Senate. The Senate will sit quietly (like jurors) and hear the evidence for as long as it takes going six days a week and starting the trial each day at 12:30 – 1 pm.  He expects the trial to take about 6 to 8 weeks.  The public will be watching.  Maybe McConnell said that to warn Trump to get a grip on himself and start behaving.  Who knows.  But the impeachment trial is coming.

If the evidence comes out in the trial as convincingly as we hear it is coming out in depositions in the House, there will be a clear case of abuse of power, violations of campaign finance and FEC rules, extortion and bribery and violations of due process of two American citizens- Joe and Hunter Biden. In addition, there may also be serious national security implications that endanger the country that we will learn about and some lawmakers have hinted that there is evidence of ongoing criminality.  If Americans are frightened by what comes out in the impeachment trial, more Americans will approve of impeaching and removing Trump which will put pressure on their lawmakers which will pressure Senators.  Public approval for the impeachment inquiry is up to 54% in recent polls.  50% of Americans are in favor of impeachment and expulsion and that is before they have heard the witnesses testify in the coming impeachment trial in the Senate.

Will Republican Senators vote to convict if the evidence is overwhelming?

There are cracks in the GOP firewall.  Francis Rooney, Florida Republican in the House is one. Senator Mitt Romney is another. Adam Kitzinger, Illinois lawmaker, is another. Will Hurd of Texas is another. John Kasich, Republican former governor of Ohio, favors impeachment.  McConnell just broke with Trump on Syria in an op-ed.  Admiral Mc Raven just wrote an op-ed in the NYT that Trump is attacking our Republic from within.  A group of conservative Republicans, Republicans for the Rule of Law, are running ads on Fox News and on digital platforms that condemn Trump’s lawlessness. Many reporters who speak with Republicans on a daily basis say that the mood in DC is shifting when it comes to Trump.  Many people see him as weakened and they are closely monitoring polling data for confirmation.

It takes 2/3 of the Senators PRESENT to vote to convict.  If Republicans don’t want to talk with reporters now, and are scurrying down the back stairs like rats from a sinking ship to avoid having to take a stand, I can imagine they might just decide not to show up for the final vote to convict this lawless president.  Thirty fearful Republican Senators might duck and cover instead of voting when it comes down to the final moments of Trump’s terrible horrible no good presidency.  If they do fail to show up for the vote to convict, that could be their uncourageous way of tacitly allowing 47 Democrats and one Independent to do the right thing.