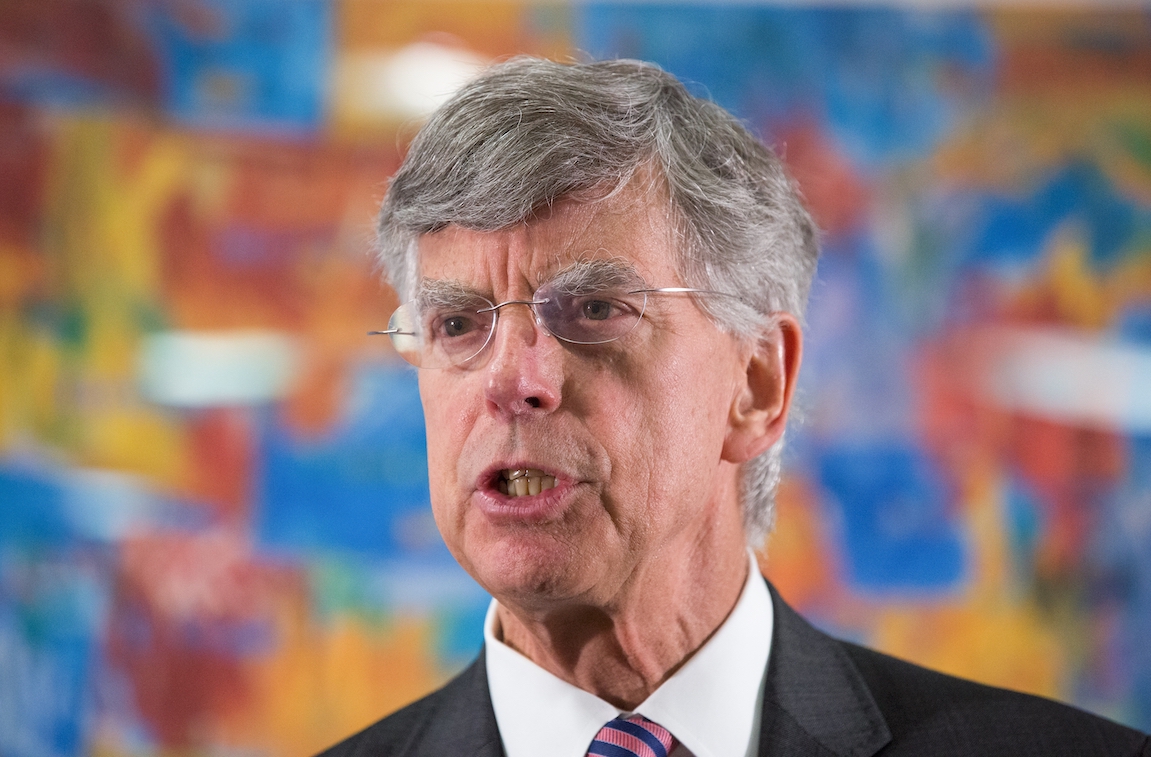 Trump has famously said that he could shoot someone on 5th Avenue and not lose any support.  In other words, Trump could commit a crime, even an obvious, well documented crime, such as a murder, in front of the world and he would not be held accountable.  That is going to be tested as the impeachment evidence comes out into the open.

William Taylor, West Point graduate, with 50 years of experience in foreign service and an impeccable reputation, testified for 10 hours before the House on Tuesday, October 22.  His page-turning opening statement exposes the Trump/Guiliani criminal enterprise that this president has been running out of the White House to try to get re-elected.  Taylor delivers the knock out blow to Trump’s no quid pro quo defense and establishes that Trump was engaged in the crime of bribery.  His meticulous notes and his clear unwavering testimony, once it is showcased in an open setting, which is coming, will, along with other testimony from extremely credible witnesses, be the turning point in Trump’s corrupt administration.

Even now Republicans are not able to defend Trump.  All they have left are process arguments – whining that they don’t think it’s fair to have closed door sessions.  A few dozen Republicans invaded a top secret SCIF on Wednesday, brought their cell phones into the space (which is illegal) and ordered pizza which they left strewn around the secured room- more like a bunch of frat boys than lawmakers.  Someone should remind those Republicans that closed door sessions are exactly what Trey Gowdy insisted on in the beginning of the Benghazi hearings, the Dems are following the rules set forth by Republicans and there are plenty of Republicans taking part in those closed door hearings- 47 of them.  It’s not like Republicans aren’t in the room, you guys.  What the Republicans did Thursday was childish and stupid as well as a violation of the rules protecting top secret security SCIFs. But what is really going on is that Bill Taylor’s testimony has shaken Trump to the core and he is rallying his GOP troops to go to war for him.  Taylor’s testimony ends the pretense that Trump is defensible.  Taylor establishes that there was a quid pro quo and that Trump directed a bribery scheme out of the Oval Office.

Multiple witnesses have been providing corroborating information in closed-door depositions in the House revealing that there was a two-pronged approach to our foreign policy with Ukraine. One prong followed protocol and normal diplomatic channels and was led by capable, straight arrow State Department foreign service professionals like Marie Yovanovitch and William Taylor. They were pursuing the Congressional mission of aiding Ukraine in its efforts to become a corruption-free liberal democracy and fight off Russian aggression.  But there was a “shadow” back channel enterprise run by Rudy Guiliani and directed by Trump (involving others including Mike Pompeo, Mike Pence, Mick Mulvaney, and EU Ambassador, Gordon Sondland) that had the mission of helping Trump out personally in his effort to create a false narrative about Joe Biden by coercing Ukraine to begin an unwarranted investigation into the Bidens and announce that publicly on CNN.

Trump is worried about Joe Biden. He sees Biden as the most dangerous general election Democratic challenger because he has the best chance to beat him.  Biden is popular in the key swing states Michigan, Wisconsin, and Pennsylvania that Trump won narrowly with only 77,000 votes and absolutely must win again if he is to be re-elected.  Currently Biden consistently beats Trump in these states in the polls.  Biden  has a reputation for being on the side of the blue collar worker, and is seen as a good and honest man, untainted by Washington corruption. Above all, Biden stands for a return to normalcy after a presidency that has damaged our alliances, our values as a nation, and whose administration is overrun by corruption.  Perhaps most of all, Trump has been exhausting everyone with his tweets, his erratic behavior and his inability to lead effectively.  Biden would offer relief from the constant chaos.  Trump is worried about Biden for good reason.

Which led Trump to try to figure out a way to sully Biden’s pristine reputation.  He wanted to be able to say that Joe Biden, Hunter Biden and Burisma (the Ukrainian gas company where Hunter was on the board) were under investigation by Ukraine.  That would give Trump a way to flip the script on Joe Biden’s otherwise impeccable record as a man who is not corrupt and never has been.  Trump could then throw shade on Biden over and over again in his rallies and have that allegation supported by the president of Ukraine.  But to get what he was obsessed about getting, he had to force President Zelensky of Ukraine to open an investigation without anything to warrant it.  Trump and Guiliani conspired to make this happen.  We have been learning how this was done through the testimony of many State Department witnesses.  Bill Taylor both corroborated these prior witnesses and added greater detail to our understanding.

The story told by Bill Taylor is compelling.  He started out reluctantly taking over for the ousted Ambassador to Ukraine, Marie Yovanovitch, who would not play along with the Trump/ Guiliani pressure campaign on Zelensky.  Taylor enters the scene after the demise of Yovanovitch when he is asked by Mike Pompeo to step in as acting Ambassador to Ukraine.  He has reservations because he saw what happened to Marie Yovanovitch.  But he cares deeply about Ukraine and wants to help the country to become a successful democracy.  So, Taylor comes out of retirement as the straight arrow State Department representative, but over time he also learns about and gets first hand exposure to some of the activities of the ongoing shadow enterprise.  Taylor turns into something of a secret agent at that point.  He takes detailed, meticulous notes about what he sees and hears.  Those are the notes that blow up Trump’s defenses.

The key take aways from Taylor’s statement are these:

Bill Taylor’s testimony reminds all of us that morality, ethics and values matter and all of that is at risk with this rogue president.  If you read Taylor’s 15-page opening statement, and I encourage you to do so, Taylor’s love for Ukraine and the people of that fledgling democracy comes through.  https://drive.google.com/file/d/1vUI__sxL_fgzy5JYqaxB9cysOHwwQSE4/view He writes about standing at a bridge at the edge of the war zone where Ukrainians are being killed as a direct result of money being withheld by the US.  This war zone is the crucial divide between Russia overwhelming Ukraine or being forced to retreat within its own borders.  The fate of the West may be teetering in the balance in Ukraine and Trump doesn’t care about that.  All he cares about is being re-elected and he will lie, cheat and break the law to get that to happen.

There is really nothing left for Republicans and the White House to argue on the merits when it comes to defending this rogue president against impeachment for bribery. Bribery is specifically identified in the Constitution as an impeachable offense:

The President, Vice President and all Civil Officers of the United States, shall be removed from Office on Impeachment for, and Conviction of, Treason, Bribery, or other high Crimes and Misdemeanors.

It will only get worse for Trump and the Republicans from here on out as more and more witnesses corroborate and bolster the testimony of prior witnesses.  John Bolton’s attorneys are communicating with House Democrats.  Bolton will be another bombshell witness.  After the closed door depositions are finished, that will end the investigation phase.  Then there will be open hearings where key witnesses will testify on TV and the American public will be watching.

We already know that Trump has done the equivalent of trying to shoot someone on 5th Avenue.  He tried to coerce a foreign country to help him kill off his political rival with a phony investigation and held up millions of dollars and a high level meeting to get what he wanted to personally benefit himself.  This is bribery.  This is a crime.  This is impeachable.  This is also abuse of power.  Also impeachable.

Today the polls indicate that 55% of Americans are in favor of the impeachment investigation.  48% favor impeachment AND REMOVAL.  Independents, the only group that really matters, now supports impeachment and removal by 53%.  That number will rise along with support to expel Trump from office as this evidence gets into the public space through televised hearings. Everything will then hinge on whether Americans care that their president has intentionally committed the crime of bribery and has abused his power.  And if they care will they pressure their elected officials to remove Trump?

In other words, can Trump break the law in plain view and get away with it?