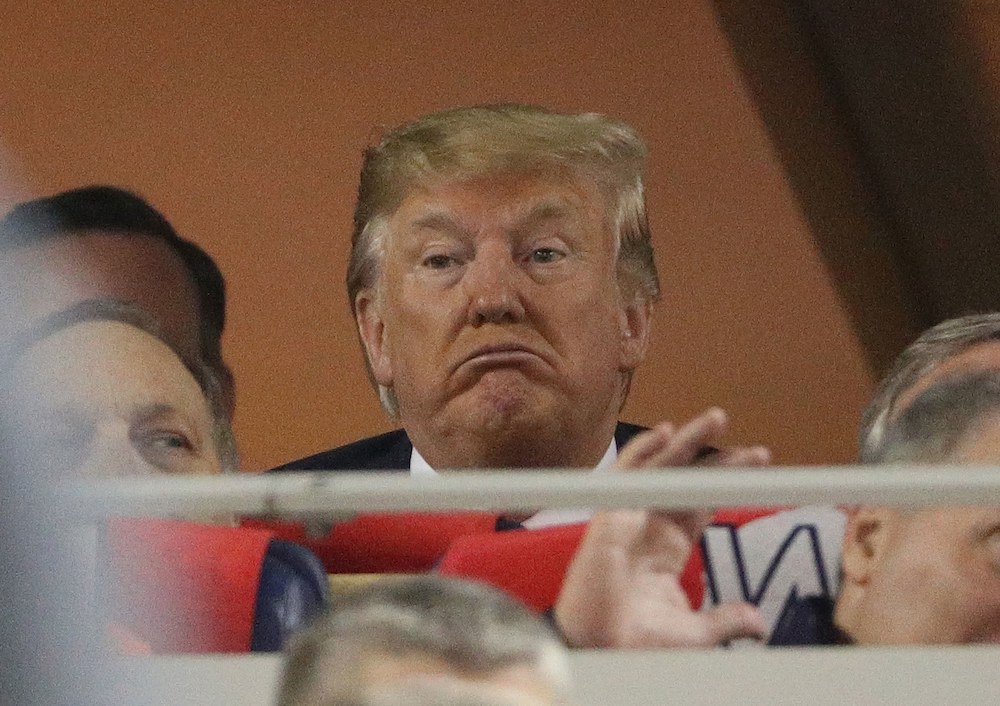 Does Donald Trump have any idea how much hate and anger he generates?  He creates a huge backlash to himself and his core group of followers and his administration every single time he opens his darn mouth.  Sure, he is beloved by his base, but his base is limited in size and is scattered across the country in mainly red districts representing a group of people who are fearful of the future.  They are estimated to make up about 25% of the electorate. His base got in a little shout out for him at the game, but what dominated and created the greatest stir on Sunday was that Trump was booed and a loud “lock him up” chant thundered across the stadium.  Baseball is a game that is an all-American sport full of heroes who are immigrants and people of color who love America and have adopted the country as their own.  After four years of bashing immigrants, Trump got what he deserved.

If Trump were a different man he would have been cheered by the crowd. Another president would have been basking in the afterglow of the death of a terrorist leader, Abu Bakr al-Baghdadi, but Trump deprived himself of that moment in the sun because of who he is.

Trump’s revolting 48-minute press conference in which he boasted and bragged and carried on about the death of Al-Baghdadi, left a bad taste in everybody’s mouth, except for himself and his followers.  That death of the ISIS leader was the result of our remarkably capable military and intelligence folks and courageous Kurdish fighters who carried it off successfully despite Trump’s nearly ruinous sudden knee jerk withdrawal of American troops that left the Kurds to fend for themselves. The New York Times documents that Trump’s abrupt pull out from Syria almost resulted in the failure of the entire mission.  The mission succeeded despite Trump.

Trump probably thought that he was entitled to a standing ovation there in the stadium for his role in the death of the ISIS leader.  Instead he got resoundingly booed and dissed by the crowd. Maybe that fed his insatiable need to see himself as the grievance president.  He is never being treated well enough.  More evidence.

Trump’s depiction of the last moments of Al-Baghdadi’s life will also inspire jihadists for decades to come.  Trump  insulted the man who he portrayed as dying in a “vicious and violent way, as a coward, running and crying”, “whimpering and crying like a dog.”  Others have commented that given the fact that the man detonated his suicide vest inside a dark tunnel, Trump’s colorful depiction was nothing more than his usual over the top fanstastical storytelling. Another possibility was that since we have learned that there was actually a dog in the escape tunnel with Al-Baghdadi and his three children as the blast went off, and the dog got slightly injured, maybe it was THE DOG “whimpering like a dog”!  Assuming Trump is not flat out lying about hearing any audio of the event.

Slandering a jihadist leader is one of the best ways to inspire enduring hate in his followers.  Trump would have done better to avoid the trash talk and keep his remarks simple and to the point to minimize the martyrdom factor that breathes more life into anti-American jihadi movements around the world.

But Trump would have to be a different person to have handled this big moment in a more mature way.  Another president could have used this moment to unify the country instead of insulting Obama by saying a certain other president should have gotten Al-Baghdadi sooner.  We have come to understand that Trump’s divisive, sniping, belittling rhetoric are baked in the cake.  He inflames passions on both sides of the American divide.  Part of his personal tragedy is that above everything else he yearns to be adored and loved but his legacy will be the lingering soot of hate that he has spread across our country.

You reap what you sow, Donald Trump.  You were booed for a reason when you went to the stadium Sunday night.  You are detested and reviled and you earned that because you are thin-skinned, self-centered, self-aggrandizing, constantly lying, corrupt and deceitful, and all sane Americans know you to be that now after 3 very long years.  When you said, “I alone can fix it” that was a clue about how isolated you would become because of your deep and abiding paranoia.  What you should have said is “I alone” and just stopped right there.

For the same reasons that Trump has isolated himself with only a few trusted people in the Oval Office and almost everyone around him walking on eggshells out of fear of being fired by him because he blames everyone but himself for his bad choices, Trump is ending up with no one who will tell him the truth.  John Kelly warned him if he replaced him with a “yes” man Chief of Staff he would be impeached.  Trump did not listen to that advice.  Instead he has nothing left but “yes” men around him.  He can tolerate nothing else.  His rallies are only stocked with “yes” men and women.  He lives in a bubble in which he is the best, the greatest, the most wonderful and glorious person EVER.  White House Communications director, Stephanie Grisham’s cringeworthy tweet says at all- she tweeted her retort to John Kelly by saying Kelly was “totally unequipped to handle the genius of our great president”.  Dear leader.  Know that we all love you.

By venturing out of his protective bubble where he lives and into the harsh reality of the real world where a majority of Americans disapprove of him (54% disapprove and 45% strongly disapprove), there at the World Series game, Trump came face to face with the animosity that he alone has created for himself as president.  Our country is better than Trump.  Better than the hate he spews and engenders.  Better than the miserable person he cannot help himself from being.

Trump is well on his way to being remembered as the most hated president in the history of our country.  And, unfortunately, we are stuck living through this tumultuous time as Trump’s coming impeachment looms and he decompensates more and more, fostering greater and greater disgust and, frankly, sheer exhaustion from the rest of us.