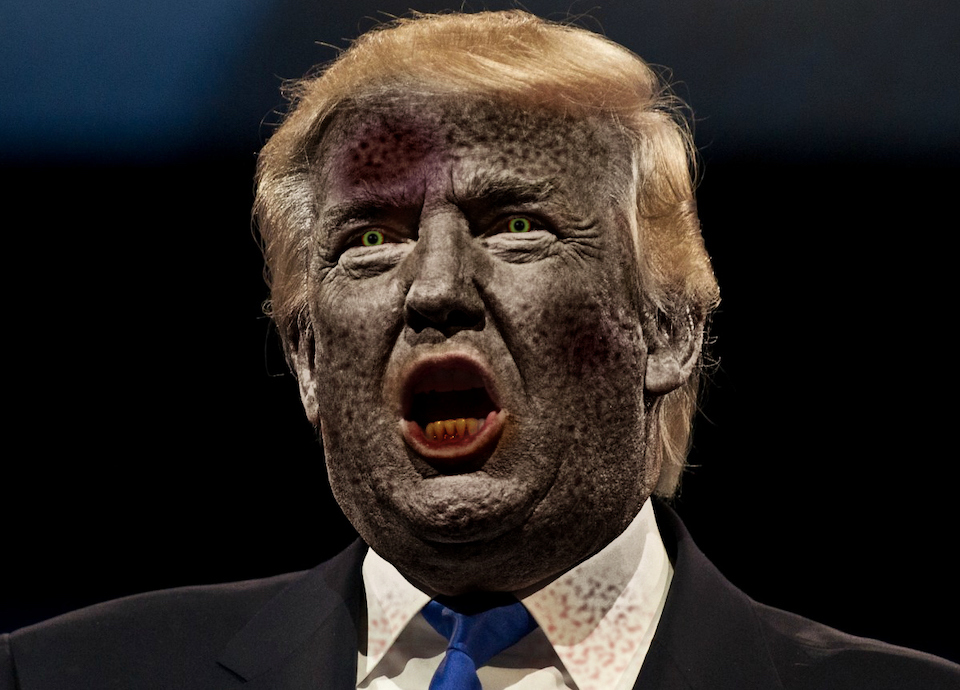 The House held their first floor vote on the impeachment of Donald Trump on Halloween.  How perfect.  It passed mostly along party lines with no Republicans breaking ranks.  Nonetheless Trump is the Republicans’ ultimate nightmare whether they admit it or not.

Reporters are camped out in the halls of Congress looking for Republicans as they run scared, trying to avoid microphones and reporters who will ask them how they are reacting to the news that the House means business about impeaching Donald Trump.  Republicans won’t say much if they are cornered, but some report that it feels to them as if they are living in a “horror movie”.  In your typical horror movie there is always some awful surprise right around the corner you didn’t expect and don’t know how to handle.  That’s how Republicans experience the rapid paced shocking news coming from the impeachment hearings being held by the Dems and also emanating from the White House.

The impeachment inquiry has moved forward in the House at breakneck speed, catching Trump and his depleted communications team off guard.  Witness after witness has come to the House Select Committee to testify, defying White House attempts to prevent their testimony from being heard.  These witnesses are honest, highly decorated, exemplary members of the military like Lt Colonel Vindman, and outstanding foreign service members with impeccable credentials like Bill Taylor, Fiona Hill and Tim Morrison.  They are telling truth to power and standing up for the values most Americans teach their children to live by and try live by themselves.  No, of course we shouldn’t hold back money that was already approved by Congress that will help our ally in need to fight a war that is part of our own protection against Russian aggression!  Of course we should not shakedown the leader of Ukraine and force him to manufacture dirt on a political rival or be threatened with a denial of those already allocated funds he desperately needs for personal benefit!  That’s corrupt.  That’s an abuse of power by any president.  But that is the story coming out and being corroborated over and over and over again.  That and more.

The pressure campaign on Ukraine was not just one phone call.  It was carried out over many months by Guiliani acting as an agent for Trump at Trump’s direction to try to get him re-elected in 2020 by using money that was not his to use to damage the good name of his most feared political rival.  The shakedown scheme probably would have worked but for the whistle-blower.  Because once that person came out with a report of multiple complaints from people inside the White House expressing shock at what the president and his allies were up to, the spell Trump has over a number of key people in his administration was broken.  Witnesses began to reach out to the House and come in to testify.  At first it was former Ambassador to Ukraine, Marie Yovanovich.  And then there were others.  Now they are coming out of the woodwork.  Just like in a horror movies, when the calls are coming from inside the house, these calls were coming from inside the White House itself, from inside the Trump administration.

Each new witness puts another nail in the coffin of the GOP because Republicans cling to Trump as if they are helpless to do otherwise, while Trump openly, brazenly, and loudly confesses to every misdeed, every crime and abuse of power that he has committed, then insists that Republicans defend him on the merits for committing those very crimes and abuses of power they know to be bad and wrong.  This is the ultimate coming nightmare for Republicans.  How can they defend a vote not to impeach a criminal president when they know better and their constituents know better?  Even now they cannot answer the simple question “Is it OK for a president to ask a foreign government to do a hit job on a political rival?”  They cannot answer that question because, unlike Donald Trump, most of these members DO understand that that constitutes a crime and an abuse of power.  They KNOW that what Trump did was not OK.  They know his motive was self-serving and his intent was bad.  But they also know that if they break with Trump in any way, they will suffer the consequences- they will be pariahs in their own party and be personally attacked by Trump.

I am frankly tired of hearing that the facts coming out of the investigation in the House “are bad for Republican Senators.”  I am tired of hearing apologists for these lawmakers bemoan how tough the Republicans have it with “these bad facts coming out”.  The facts are not bad.  What’s bad is this president.  That’s what’s bad.  The facts are simply the truth that he doesn’t want them to acknowledge.  Facts are only bad when you cannot accept them.  Will Republicans buy into Trump’s alternate, fact-free universe or will they acknowledge the truth? Republicans ought to accept reality and get on the right side of history.  This president is going to kill their party off.  As his ship goes down he will take them down with him unless they jump off.  Maybe a bunch of them should hold hands and jump together.  There’s safety in numbers.

Americans will soon watch televised hearings and get to see these witnesses for themselves and read the transcript of their testimony.  The House rules passed on Halloween call for longer periods of time for questioning by seasoned counsel.  The case will come out more like a trial with a prosecutor or series of prosecutors and a defense attorney appearing for the president who will have the same rights and powers to ask questions, call witnesses and obtain documents.  The very lame complaints about the process not being fair were blown out of the water by the passage of the House Rules for Impeachment.  Trump is getting enhanced due process rights compared to Nixon and Clinton.  Trump is entitled to have counsel not only present but empowered to get all the documents, request witnesses and evidence, attend every hearing, ask questions of all witnesses, raise objections, and have equal time to cross examine witnesses.

The American people will be the jury.  Even if Trump does not get “convicted” (evicted from office) by the Senate, after the American people have heard what he did, Trump will be damaged goods.  He will be wounded by the truth about him that will come out.

Ironically, the best case scenario for the Dems would be the opposite of what most people think.  It would help the Dems most if Trump is NOT expelled from office after a trial in the Senate.  That way the Democratic candidate, whoever it may be, will be running against a man who has been exposed as a criminal and allowed to stay in office by complicit Senate Republicans who are selling out our country to the rich and powerful, destroying our healthcare, our environment, failing to fix infrastructure, passing a tax bill that only helped the wealthy, damaging manufacturing and farming with an idiotic trade war, and coddling a criminal president.   I cannot think of anything that would ignite the passions of progressives more.  Thank you so much.

So bring it on.  It’s Nightmare on Elm Street for Republicans living in a horror movie of their own making  They created this monster and let him have full power over them.  Now they are going to have a very very scary time of it.  Unless some of them get together and agree to ghost Trump.  Don’t hold your breath over that.