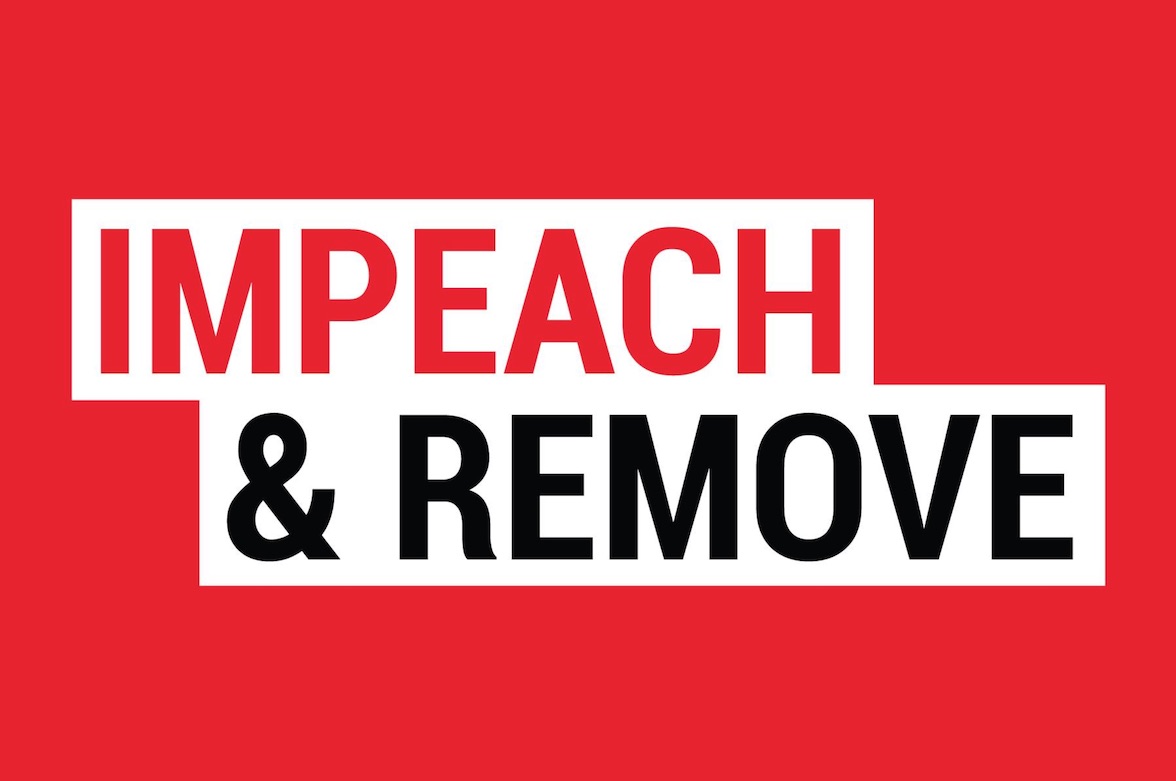 Today, Wednesday, December 18, 2019, the House will vote two Articles of Impeachment based on facts that are damning and uncontested.  Anyone who understands these facts knows that Trump committed bribery and wire fraud (bribery over the phone).  If Trump were a governor he would be indicted and he would go to jail based on these facts and the witness testimony.  But that is not going to happen to Trump.  Why? Because of a corrupt Republican Party, Fox News’ incessant propaganda in red districts and Trump’s base.  Working together they are sustaining millions of Americans in an alternate universe where they see no evil and hear no evil even though evil is right before their very eyes in plain sight.

After the House Judiciary committee’s impeachment vote strictly along party lines and McConnell’s decision to block a Senate trial with key first hand fact witnesses so that Americans could understand what Trump has done and is still in the process of doing that imperils our democracy, Michelle Goldberg wrote an op-ed in the New York Times.  She wrote about people feeling depressed as they see what Trump is doing to our country, our discourse and our climate future. People feel helpless to prevent the damage.  It IS depressing, frustrating and annoying to watch the Republicans in the House make a mockery of impeachment in the most cynical way, by twisting reality to fit their conspiracy mongering politicized version of the truth – ignoring facts and evidence.

Republicans claim there is insufficient evidence to impeach.  Is that right?  Then subpoena Bolton, Mulvaney, Robert Blair and Michael Duffey to testify in the Senate trial as Chuck Schumer has requested!  These four witnesses have direct knowledge and they refused to come to the House to testify.  Do you want the truth? Then they should be sworn in and required to tell all of us what they witnessed Trump and Guiliani doing.  You can’t argue the record is incomplete, then turn around and claim blanket immunity for the most important first-hand witnesses.  But that is exactly what the Republicans are doing.  If these 4 witnesses do not testify it should be obvious to everyone that the president and Republicans are afraid of the truth getting out to the American public.  Unlike Watergate where the question was, “what does the president know and when did he know it?”, with Trump we all know the president knew and directed this scheme so the only question is “what is the president hiding?”

Lindsay Graham and Mitch McConnell are ready to ignore all the evidence and vindicate Trump immediately. They are not even trying to have an impeachment trial in the Senate that is fair and helps all Americans understand what Trump did and is still doing that is a threat to our national security and to the continuation of our democracy.   Graham, who runs the Senate Judiciary committee, has already said, openly, that he has made up his mind that the trial will be a win for Trump without regard for the evidence.

It is also clear that millions of Americans who attend Trump’s rallies and are his followers have no interest in the evidence or the truth either, only his vindication.  The rabid base is the reason Republicans lawmakers must be all in on Trump or face losing their jobs.  These base voters are not put off by Trump’s lawlessness.  They support Trump BECAUSE he is a corrupt, lawless man, willing to defy the Constitution, pack the courts with judges that do not represent the majority and deconstruct our democracy.  They even get a kick out of it when he bullies Greta Thunberg, who is trying to save the world from climate disaster, while Trump ignores that five alarm fire.  Trump appeals to his base because he expresses the pent up rebel in these, mostly older, angry men, who have to follow the law themselves but derive vicarious pleasure when Trump breaks the law.  Trump people love that about him.  He is THEIR bully.  He is THEIR protector. Or so they think.

That these people can be so fully deluded to believe this man cares about them when in fact he only cares about manipulating them for his own aggrandizement and re-election, reflects the enormous power of propaganda (Fox News/ Sinclair) and fear mongering.  I am reading a book that sheds light on the Trump base:  Mindf*k by Christopher Wiley, the whistle-blower who worked at Cambridge Analytica and helped to bring that company down.  In his book, which I recommend to you, he talks about how CA sent people, including him, to “study” Americans for purposes of influencing them in the presidential election of 2016.  Wiley talks about sitting in bars in places like Virginia and watching these blue collar guys yelling at the TVs in the bars while they watched Fox News.  Wiley realized that these guys were using shows like Sean Hannity’s, Tucker Carlson’s and Laura Ingraham’s as a kind of poor man’s therapy. Makes sense.  Fear mongering.  Cheap therapy for angry old men.  No wonder Fox is so popular.  Finding someone to blame can feel real good.  Someone to ridicule and mock.  It feels good in the moment but doesn’t solve the underlying problem. What is the real problem? The world is changing too fast and it is too threatening for these people and Trump captured their clinging adoration by being a fear-mongerer.

In short, Fox News hosts and Trump rallies provide ugly therapy for the angry and fearful who cannot accept a world that scares them because it is becoming multicultural and very different from the one they grew up in. In this new world women and minorities can get ahead, for example, based on merit instead of people getting ahead based on the color of their skin.  Fox stokes the underlying culture war that juices Trump’s power.  Trump essentially promised to pump the brake on change so that fearful people could feel safer.  Trump serves a purpose for these people as they do for him.  Trump and his base are codependent. And the GOP is complicit.

This is our playing field.  So what do we do?  How to respond to this?

We can either curl up in a ball and get depressed about it or rise up and work for change.  The grief is real but the reaction we have to it is a choice each of us can make.  We can either give in to a sense of paralysis and be overwhelmed by hopelessness or we can channel our energy into action.  If the protesters in Hong Kong can keep up their crusade for liberty for 6 months, surely we can keep working to save our democracy.

How can we get active?  Here’s how.

Fight back against the voter purges that are starting.  There was one in Wisconsin, a key swing state that will likely be one of the Rust Belt states that will decide the outcome in 2020.  Over 230,000 voters were purged from the voter rolls in Wisconsin last week following a request by a right-wing group.  55% of those purged voters lived in districts Hillary won in 2016 and most of them are from college towns – Milwaukee and Madison.  If the GOP can get away with it, they will try to keep minorities and younger people from voting in 2020 because that group of voters is more likely to vote Democrat.   You can help. Here is a link so you can donate to help or get involved on the ground in voter registration in Wisconsin. WisDems.org/StopThePurge

Get involved in being the solution.  Join Indivisible,  Get active with the Dem Party.  Join MoveOn.org.  All you need to do is google these groups and find one near you.  Then get active by registering voters especially in key swing states.

It is energizing to DO something productive and to connect with groups that are rising up all across this country to push back.  You will immediately feel better because you will have a group of like-minded people you can engage with and work with who also want to replace this administration with one that tells us the truth, unites us and brings us together, heals our country and realigns it with our allies abroad, really truly cares about the American worker, affordable health care and education, and rebuilding a middle class.  Action is the cure to depression!  I have gotten politically active in this way and the people I have met are wonderful, energizing new friends.  Do this to feel better.

There are many other ways to be involved.  Be sure to support our elected representatives in the House who are working to expose and expel this administration. Send them a thank you email or make a call to their offices to thank them.  They are trying to do the right thing and need to know we recognize that and want them to continue.  They are just people like you and me.  They get depressed and demoralized too with all the dirty tricks the GOP is engaged in to win without being the majority.

We are the majority.  But there is no way to change this equation unless we get back the power to lead the country and stop the deceptive lies and propaganda that are the daily fare of everyone in flyover country thanks to Fox News.

This coming election in 2020 is the moment of truth that Ben Franklin warned us we could face some day. We have a Republic… but only if we can keep it.  We CAN keep it if we work to keep it.  Be part of the next blue wave!