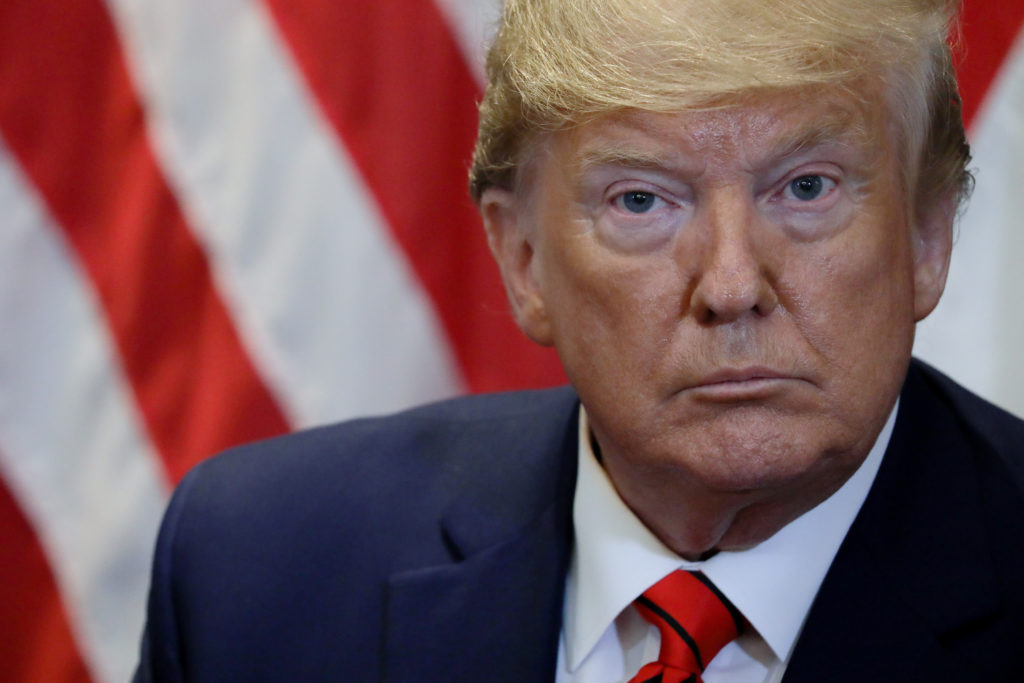 Trump was impeached by the House for Abuse of Power (230 to 197) and Obstruction of Congress (229 to 198) on his 1,063rd day as president.  All day long on December 18th, 2019, for 12 hours straight, each of the House members who wanted to make a statement for the record had the opportunity to do that.  The comments coming from Dems and the GOP could not have been more starkly different: our country is divided into Democrats who understand the evidence and the danger of this president and Republicans who also understand the evidence but have chosen to be part of the obstruction and cover up for Trump.

Not one Republican challenged the underlying facts.

Not one Republican vouched for the character of this president.

Not one Republican said Trump did not do what the Democrats are impeaching him for doing.

Instead, Republicans shouted about the unfairness of it all and expressed anger about the process.  This was the best they could do for Trump who did, in fact, commit impeachable offenses that were exactly the kind that the Founders worried about- a president who would be king- out for himself and using the vast power of the country as his own to leverage personal gain, cheating to be re-elected and refusing even one stitch of evidence to go to the House.  The Founders understood this potential peril.  They had bad kings in mind when they drafted the Constitution.

As for the Democrats, there were some very compelling speeches by Adam Schiff, Steny Hoyer, Nancy Pelosi, and many others, explaining what Trump had done very clearly and why what he did was impeachable.  Anyone who has been living under a rock could listen to those speeches and understand what Trump did and why it was so bad and so wrong.  But when it came time to vote, Republicans voted strictly along the party line as expected.  On the Dem side, there were a few defections and one oddball, Tulsi Gabbard, who is running for president, who voted “present” for reasons no one could figure out and no one cared about anyhow.

There was a lot of whining by Republicans about the unfairness of it all despite the fact that Trump brought this impeachment on himself- was warned about not soliciting the help of a foreign country to win an election by Mueller’s voluminous Report and by multiple people in his administration. But he did it anyways and, as we all know, he even made the offending call to Zelensky the very day after Mueller testified.  In fact Trump is continuing his crime wave with the help of Guiliani even now.  He has every intention of inviting in more foreign influence for 2020 and trying to get some country or other to cook up a way to damage his more feared Democratic rival with a trumped up need for an investigation in to the Bidens the way he used the endless email issue to damage Hillary.

There was so much whining by Republicans before the impeachment vote was taken that I thought the Dems should have brought in some cheese and served it up to the Republicans to make a point about what their party has become: have some cheese with your whine.  The Republican Party is no longer the Grand Old Party, it has become the party of endless grievance.

The impeachment vote division on party lines did not surprise anyone.  It was anticipated.  What was possibly more important and not anticipated was what Nancy Pelosi said after the impeachment when asked by reporters about when she planned to send the Articles over to the Senate for the trial.  She said she wanted to be sure the trial would be fair.  “We need to see the process on the Senate side.  I haven’t seen anything that seems fair to us.”

Mitch McConnell has said in no uncertain terms that he will NOT be impartial.  Even though the Senators all have to take an oath to be impartial.  Both he and Lindsay Graham have made it perfectly clear that they do not intend to abide by the oaths they will be taking.  At all.  And McConnell is working hand in hand with White House counsel.  That’s not supposed to happen- that’s like the foreman of a jury working with defense counsel.  The Senate leader is supposed to be working with the ranking member, Chuck Schumer, to come up with rules for the trial that are fair.  Chuck Schumer has asked that documents be introduced in evidence and live witnesses testify.  Specifically Bolton and Mulvaney and two others.  These are four people who were in the room with Trump as he was cooking up the Ukraine scheme and getting Guiliani and others to implement it or they have first hand knowledge about how the military aid was held up.  The scheme Trump directed with Guiliani included removing Ukrainian Ambassador, Marie Yavonovitch, a known corruption fighter, and getting her out of the way so that Guiliani could get the president’s corrupt scheme implemented.  I think Americans would like to hear about all of that, don’t you?

71% of Americans say Trump should allow his top aides to testify in the expected Senate trial. 64% of Republicans say so, as do 72% of independents and 79% of Democrats. Mc Connell is trying to prevent that from happening.  Republicans are claiming insufficient evidence but they have conveniently forgotten that Trump barred and obstructed all the key first hand witnesses from testifying and all documents from being turned over in the House.  Obviously Trump has a lot to hide, otherwise these witnesses would have been beating down the doors of the House to tell their stories.

Now that the Articles have been passed by the House there is no reason to be in a big hurry about getting them to the Senate.  Articles of Impeachment don’t expire.  And even though Trump is a clear and present danger, it is also abundantly clear that McConnell is going to try to have a kangaroo court instead of a real trial that could inform Americans.   So getting articles over to the Senate in haste when there won’t be a real trial won’t help with the problem that Trump is a crime wave and he keeps on “criming”.  Articles of Impeachment could be held in abeyance until Mitch McConnell sees the light and permits live testimony.  They could be held in abeyance until we have the 2020 election, for that matter.

Nancy Pelosi knows how to play her cards.   She is up to something by holding onto the Articles.  She has consulted with Laurence Tribe, Harvard law professor, who has been suggesting a strategy to hold up the Articles from being sent over to the Senate while focusing on the FAIRNESS ISSUE.  Everyone should want to have a real trial that is fair and impartial.  The American people will watch that TV show.  The House wants a real trial.  Chuck Schumer wants a real trial with witnesses and documents.   And I think Pelosi and Schumer are using Trump himself as a wedge to force McConnell’s hand because Trump really really wants a trial too. Trump wants that because he thinks it will be like a reality TV show that will exonerate him.  So there is mounting pressure on McConnell NOT to have a sham trial.  And Pelosi and Schumer are mobilizing Trump as their weapon to exert force on Mitch McConnell.  Keeping Trump in a kind of agonized suspension over how soon he will get the trial he wants will cause him to push McConnell to get what Chuck and Nancy want.

And there is another way that Schumer can get the witnesses the Dems want by mobilizing the needs of purple state Senators. McConnell says he doesn’t care about pressure.  But there are some key purple state Senators who will need to show their constituents that the trial will be conducted fairly- with witnesses and evidence- or risk losing their election and that means Mitch would lose his role as leader of the Senate if that happened.  The way the Senate trial works, the minority leader, Chuck Schumer, can ask at any time during the trial to have a witness called in to testify whether Mitch wants it to happen or not.  If  there are 51 votes to get what Schumer asks for, then the Senators who voted in that bloc get what they want and the Chief Judge is supposed to support that and make it happen. So even if 4 Senators break with McConnell and go with Schumer, Mitch could be in trouble.  Those at risk Senators could move the needle in other words.  Of course that will happen only IF the voters in their states are insisting on fairness.  This is why Pelosi is letting impeachment sit out there while raising the need for a FAIR TRIAL.

I think Pelosi’s strategy to hold up the Articles of impeachment reflects 3 key potential developments coming in the next few weeks.

1) The big reason: Public opinion could grow to force Mitch to have a FAIR trial that would educate the public.  The pressure on Mitch would come from these at risk Senators: Cory Gardner of Colorado, Jody Ernst of Iowa, Lisa Murkowski of Alaska, Martha McSally of Arizona, Susan Collins of Maine, and North Carolina and Kansas also have been named as states with possibly at risk Senators because those states are shifting from red to blue and Mitt Romney of Utah, who is not at risk but has some moral core left despite being a Republican.   If voters in these states insist that there be a real trial instead of a phony baloney one, we might get that or something closer to that, and if not, those Senators might lose their seats in 2020.

2) Next possibility: There may be more important negative information about Trump and his taxes and love affair with Putin on the verge of coming out given that Lev Parnas wants to talk with the House about what he knows about what Rudy Guiliani was up to in Ukraine and Rudy himself might be indicted pretty soon as well.  The good news there would be that once Guiliani is indicted his lawyer will shut him up and stop him from going on these nutty conspiracy inspired fishing expeditions in Ukraine and we the people will finally get some peace and quiet because we won’t have to listen to that lunatic on TV.

3) Next possibility: There are pending court decisions that are expected very soon that could force John Bolton and Mick Mulvaney to testify before the House. If so, they might be required to come in to testify in the Senate trial.

Congress is on break now until January 6th (House) and the Senate is up in the air about when they will return.  In the meanwhile, contact your Senator and insist on a FAIR TRIAL.  Especially if you are in Maine, Colorado, Arizona, Alaska, Kansas, North Caroline or Iowa.  You are incredibly important!!! and you could influence the outcome of the Senate trial of this president.  Get active if you care about fairness.  Contact your Senators and make noise!!!  IF you do not live in one of these states, call your friends and family who do and get them to contact their Senators!