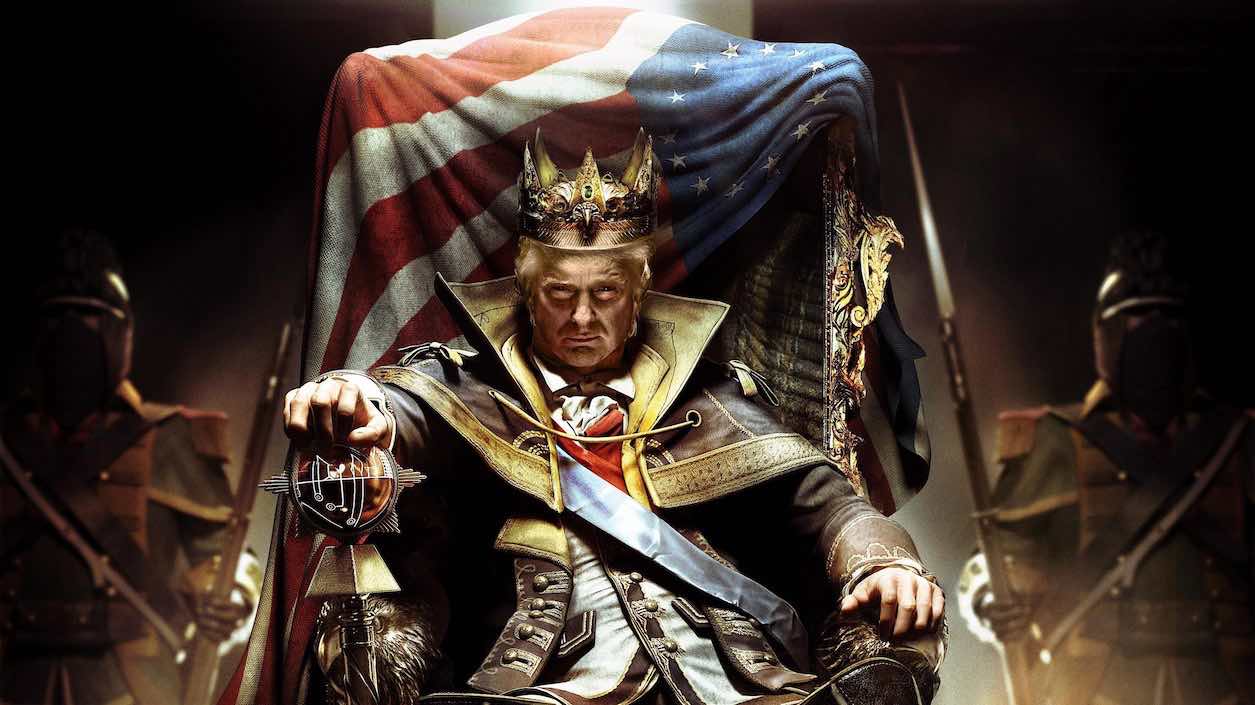 A president cannot abuse his power because he has sooooo much power that it cannot be abused.  In other words Trump as president is above the law.

Given this defense Trump really could shoot someone on 5th Avenue and not suffer the consequences as long as he is president.  Dershowitz also made a second claim, namely that Trump was not charged in the Articles with breaking any specific laws therefore he is not subject to impeachment.  These are both specious arguments.

If Dershowitz made these arguments in my first year law school Constitutional Law class final he would have flunked.  How he can be a Constitutional law professor emeritus at Harvard is beyond me.

1. The First Argument that the President Cannot Abuse His Power

The VERY FIRST article of the Constitution is about the power granted to the legislative branch and one of the most consequential powers given is oversight of the executive branch (president).  Why did the founders make that the very first article of the Constitution?  Because it was incredibly important to them to have checks and balances!! They did not want a king to rule over them.  They wanted a president who would answer to the will of the people.  They had had it up to here with monarchs telling them what to do, ordering them around and telling them to shut up about it.  The president was supposed to answer to the people.  That’s why the House, the People’s House, as it is called, specifically has that oversight power, oversight over the president.  We know that because the Constitution gives Congress the power to investigate and subpoena witnesses and if people lie to Congress that’s a violation of the law.  You could end up in jail for lying to Congress.  That alone tells you the president is not supposed to be able to go rogue and do whatever the heck he pleases as Trump did throwing Congress under the bus by taking taxpayer money appropriated by Congress to help an ally (Ukraine) fight a hot war against our enemy (Russia), and using it instead to extort Ukraine to satisfy his corrupt personal obsession (smearing Joe Biden).

What is the meaning of checks and balances if the president is beyond the scope of any check or balance?

Why would the Constitution give the legislative branch these oversight powers if they are irrelevant and can be ignored?

The Article II of the Constitution has to do with the power of the executive branch.   Trump has famously said that Article II lets him do anything he wants. He must have been talking with Alan Dershowitz to come to that conclusion.  But that is just plain wrong.  If the president can do anything he damn well pleases, then it would make no sense at all to have the Article I powers of Congress enunciated in the Constitution.  On its face, Dershowitz’s Constitutional argument is a misinterpretation of our founding documents.

Let’s play this out further.  If what Dershowitz claims is true then we have all been interpreting the Constitution wrong since the beginning of our country.  All those former presidents who had to follow the rules were chumps and dopes.  They didn’t need to follow the law.  Everyone who said that in our country no one is above the law, not even a president, misunderstood the intent of the Founders.  And those Abuse of Power Articles of Impeachment brought against Clinton and Nixon were baseless and unenforceable on their face since a president can do whatever he wants to do.

Notice, however, that the Republicans were the first to complain loudly and bitterly when Barack Obama stepped over the legal boundary line and determined on his own say so that the Dreamers could stay in the the United States and there could be a process established for them to achieve citizenship.  Republicans screamed bloody murder about that abuse of power.  If Dershowitz is right, Obama was well within his rights as president to assert his power in that way.  Republicans seem to forget that if they clear the way for Trump to have limitless power, our next president might be Bernie Sanders or Elizabeth Warren who have very different visions for the country.  Do they want Sanders or Warren to have all that unfettered power?  The reason the president is expected to follow the law is because the laws enacted by the House are supposed to reflect the greater will of our very diverse nation.

The defense that is emerging: “I am your king.  Get over it”, is the same defense that is being argued in multiple court battles that Trump is waging in federal courts with his army of lawyers at taxpayer expense to keep everything covered up.  The executive branch has not responded to one House subpoena for witnesses or documents in its investigation leading up to the Articles of Impeachment and the president is ordering everyone in his inner circle not to respond to subpoenas from the House.  That is the basis for the second article of impeachment- the contempt of Congress.  Not one witness or document.  Failure to comply is being argued using the same rationale.  The president need not comply if he doesn’t want to. End of story.  (And yet they argue that the House should have called first-hand witnesses.  How do you do that when the executive branch totally blocks these witnesses and you say that’s ok?  That’s a yellow flag on the field, you guys.)

Other presidents who did not want to comply with subpoena requests at least gave some documents over and raised legal arguments including the issue of executive privilege where it is supported by precedent in the law.  Nixon followed the law when faced with his own impeachment and told to turn over those incriminating tapes that led to his resignation.  But Trump is a different species.  The law is meaningless to him and probably doesn’t even know why he is being impeached.  He lives in a bubble in which he is already king. He demands that everyone to follow his orders like lemmings following their leader, marching into the sea to their doom.  He KNOWS he is right and they are wrong.  In other federal cases, these same “I am king. No rules, I’m right. L’Etat C’est Moi” arguments are being made and some judges, like Judge Jackson, are making it clear that this interpretation of the law is wrong.  Judge Jackson’s opinion in the Mc Ghan case makes it crystal clear that presidents are not above the law.  She WRITES that in her opinion.

When it comes to the Senate impeachment trial, if the Republican Senators listen to the evidence already heard in the House, even without the Lev Parnas’ bombshell documents and his statements made in a breathtaking interview with Rachel Maddow (which has been made part of the impeachment materials), and do not vote to convict Trump, they will be acting against their interest by bombing out and destroying their own Article I powers and turning themselves into human pretzels to defend the indefensible.  Every reporter should ask every one of these Republican Senators if they think the president is above the law.  I want to hear those answers.  It is ironic that Dershowitz, who is supposedly a Constitutional law professor, would be making an argument that deconstructs our Constitution.   I thought Constitutional law professors believed in the Constitution.  Of course, what Dershowitz will be doing is giving the Republican Senators an off ramp, a way to defend Trump’s actions in Ukrainegate to the American people who want to vote to keep Trump in power in those red states where rabid political tribalism has become the norm.  Shame on you, Alan Dershowitz.  And shame on all those GOP senators who are putting their own re-election above the good of the country.

2. The Second Argument There Was No Specific Charge of a Law That Was Broken

Next, Dershowitz says Trump was not charged with a violation of law.  He does not say Trump did not break the law because he knows better.  Trump broke the law.

Dershowitz is saying that the House specifically failed to charge the crime of bribery or the crime of extortion as an article of the impeachment but Dershowitz as a criminal defense lawyer has to know that these crimes were committed and that Trump fulfilled the elements of these crimes.  The argument he makes is about form not substance.  If the House wanted to call his bluff they could probably amend the Articles of Impeachment to include the specific crime of bribery, but there is no need to do that.

Ask yourself this- do you want a country where the president is above the law?  Do you want a country where we have a king not a president?  Do you want to do away with checks and balances?  Because if you answered NO to those questions, you need to call your Senators especially if you live in those in those states trending blue (swing states/purple states) and give them a piece of your mind: that’s Wisconsin, Michigan, Pennsylvania, Ohio, Arizona, Florida, Maine, Colorado, and Georgia.  You need to write a letter to your local newspaper.  You!  Yes, YOU! have power right now to make a difference in the outcome of this impeachment.  Your call, your letter, your email right now at this moment in time to your Senator could be the difference between witnesses or not, documents or not in the impeachment trial.

The Dems need 4 willing Republicans to join them to request evidence be heard in the impeachment trail.  Even if Trump is not expelled from office, the more information that comes out in the trial the more likely it is the American people can figure out if they want to continue on with this president.  Act now to have a voice.  Your Senator is tallying up the yeas and the nays.  Call them.  Write them.  Do it on Tuesday when they are back at work. Get your friends and family to do this too.  These Senators are supposed to be working for you and me and for the American people, not for Donald Trump.