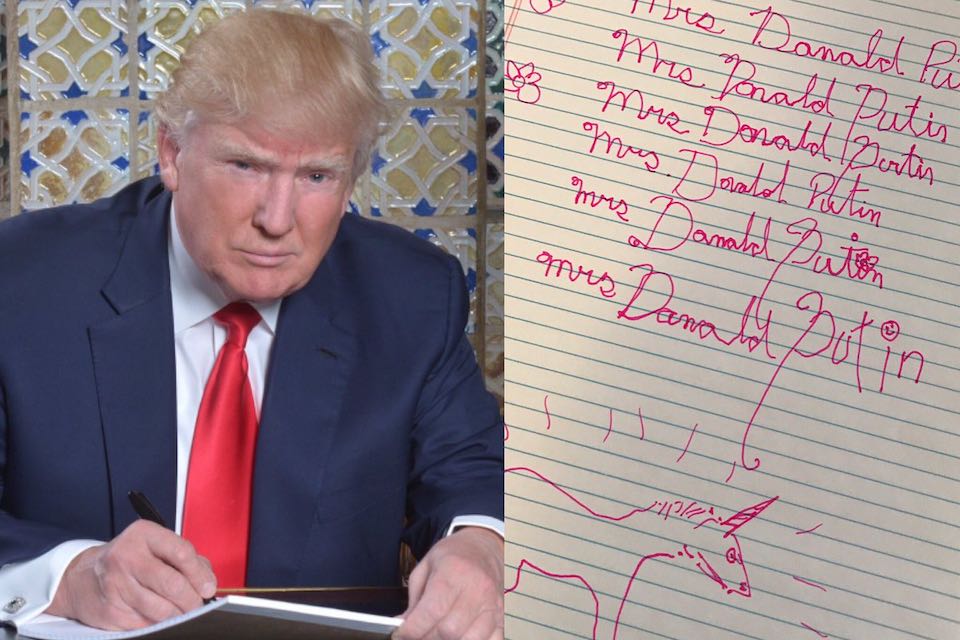 As someone who analyzes handwriting for personality traits as a hobby. I have been looking at some samples of Trump’s unusual handwriting. Handwriting analysis is a combination of empirical evidence and interpretation by someone with a good understanding of human nature.  It is both an art and a science. I have done handwriting analysis as a hobby since I was about 12 years old. Most of the time my assessments are pretty accurate- people tell me. Probably in the range of about 80% to 90% accurate I am told.  Not perfect, but good enough to be useful.

Handwriting analysis is not palm reading or astrology and does not predict the future except that it can predict likely behavior because behavior is on a continuum. It can tell you things you mostly already know about yourself. As a former prosecutor I used to look over at the handwriting of opposing counsel at the bar of the court to get an idea about what kind of defense I would be hearing from counsel.  Based on details and facts or made up?  Well-organized or fly by the seat of opposing counsel’s pants?  Handwriting analysis comes in handy in a lot of settings: dating, finding reliable babysitters, checking out potential jurors, and knowing yourself… just to name a few.

I have looked at samples of Trump’s handwriting to get a better understanding of what it is like to be Trump.  I think I have learned some interesting things about this guy from an analysis of his handwriting that I am going to share with you in this post.  Some of the information helps me understand his often seemingly incomprehensible and contradictory behavior.  I hope it helps you too.

Based on his handwriting Trump is by nature intense, enthusiastic, energetic, optimistic, obsessive, certain of himself and unshakeable in his thinking. He makes an impression wherever he goes and likes being the center of attention. He has the ungrounded, unfounded optimism of Pollyanna and Little Orphan Annie rolled into one.  That aspect of his nature is reflected in the handwriting lifting off the baseline at a sheer 45-degree angle like an airplane taking off. The 45-degree slant upwards cutting across the page, tells us that his enthusiasm, positivity, obsessive energy, and optimism, are central to and core drivers of his personality. HIS writing blots out the printed page below. He forces himself onto the page and dominates it.

This helps us understand how he got elected and how he seems to be made of Teflon in the face of threats that would damage or destroy any other president. He can look on the bright side when faced with a bad situation and believe he can will it to improve. He will figure out how to make that bad situation work in his favor. He will always fall back on his “positive thinking” approach to problems to deal with difficulty. He dominates the space he inhabits wherever he may be.  It also helps us explain why so many women have reported being sexually assaulted by him. He is capable of that. He is into domination.

Trump is, however, missing something really important, especially for a president.  He lacks the ability to focus on and process facts and details and therefore he has a lot of trouble learning new things and changing his thinking based on evidence or facts and he is not interested in doing that anyhow.  Because of this combination of traits, he is both obtuse and oppositional- and he will dig in like a stubborn donkey- especially when he feels crossed or attacked.

It is telling that an ability to take in and process detail is so absent.  Based on the writing I have seen, he lacks the capacity to learn. What does that mean? He cannot sit still and study anything. His mind fights it, blocks it out, skids away, skips away. His attention has moved on. I can only imagine the difficulty his briefers face trying to get him to listen. He is as certain as he can be, but he relies on his own previously formed opinions that are in his brain, blotting out everything else he was just told or he relies on people he trusts to tell him what to believe- people like Sean Hannity. He is untethered to facts and details, uninterested in accuracy, and unlike most people, contrary factual data rarely alters his certainty.

I think this is why he is susceptible to conspiracy theories and half-baked ideas.  He does not differentiate between researched fact and garbage thinking fiction.  He is not able to tell accurate information from baseless information. He is not even aware that his lack of ability to focus on detail or absorb factual information is a problem. His optimism takes over.  He thinks his opinions, untethered as they are to fact, are a great strength of his- and in some ways, it is.  He is right about that because he is a cult leader and his base thoroughly believes what he says whether or not it is realistic or fact based.  I think his followers are believers, in part, because of Trump’s grand positivity and the willingness of people in his base to deal with things they fear by relying on conspiracies to comfort them.

Trump’s signature is a fortress and it is unintelligible. It is like a barbed wire barrier and a temper tantrum all at once. Nothing gets in or out of this fortress. No information comes in if he is uninterested. He has no self-awareness, no insight, and none is possible here. It is all self-protective and very paranoid (defensive). Everyone is out to get him in his mind with the exception of a few trusted allies and family members.  Trust is something that does not come easily to him and is easy to lose in part because of his incessant paranoia. This helps to account for the huge number of people he has fired and removed and replaced with “loyalists”. This also helps us understand his need to hear people praise him to earn his trust. People around him do this because they have learned that when they praise him, he will listen to them and trust them more.

He also loses his temper and has rage attacks, bursts of anger. He believes there is danger to himself everywhere, which can help us understand why he is so defended, so thin-skinned (fearful), so prone to blow up (he is scared but hides it) and why he blames everyone else but himself for whatever is going badly (part of his defense system).  He is convinced he is being constantly assaulted. Trump inevitably sees himself as the victim, the subject of attack and that is the reason that he attacks others.

Trump goes on the attack in part as a way to cope with his internal sense of ever-present danger because that is what he experiences in his daily life almost all the time by reason of his deep seated paranoia.  I believe he must have been raised by an emotionally abusive parent, since he is always on the lookout for the next incoming blow to his self-esteem.  For Trump, the remedy for fear is to attack, attack, attack.  Like a fighter in the ring, he needs to be on the offensive, punching out the perceived foe so he won’t get hit by the knock-out punch first. Trump lashes out first and hits hard.  We see this every day in his vicious, obsessive tweeting. He is trying to protect himself, his fragile self, by engaging in these assaults.  That is no excuse for his baseless and hurtful attacks on other people, by the way.

This reflex can help us understand his seemingly strange response when he was asked by Peter Alexander about what he would say to worried Americans about coronavirus. He took what any other president would have seen as an opportunity to comfort Americans and instead lashed out at the reporter asking the question, calling him a terrible person. Whenever you see Trump lash out, look for the deep-seated fear that prompted it.  The fear that Trump was responding to, was that Peter Alexander was being critical of him, snarky, unmasking him as the incompetent he fears he is in his handling of the pandemic.

There is much more in Trump’s handwriting that I could comment on but the post would be way too long.  I hope these observations and insights are food for thought.  I hope they help you understand more about Donald Trump.