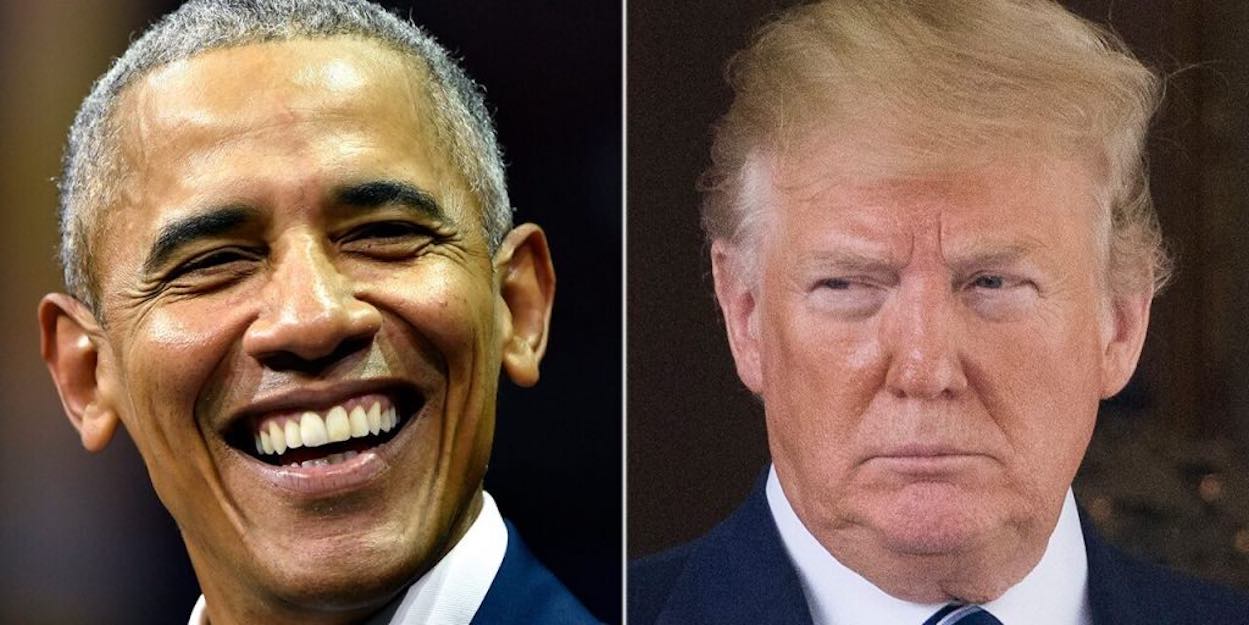 For forty years there has been a tradition that former presidents commission an artist to do a portrait of them to hang in the White House. The former president and first lady are hosted in the East Room by the current president and first lady.  Politics are put aside. It is a lighthearted get together.  But after 40 years of this tradition, this is one more norm that is getting thrown away by Trump. Neither Obama or Trump want to go through with this tradition.

Barack Obama was and still is a beloved, acclaimed president with an approval rating of 55%, which means Independents like him as well as Democrats. He ran our government extremely well and did so without corruption.  He was capable and competent. These are all traits that Trump lacks.  Trump knows that.  In Trump’s mind, Obama stands as a constant rebuke to him.  Trump wants to be the best, the most beloved, the most acclaimed president ever.  But he is mucking up almost everything compared to Obama: unprepared for the pandemic Trump tried to use the power of positive thinking to pretend it away. His delayed response caused the unnecessary deaths of over 36,000 Americans.  Trump believed nonfactual sources of information, was unable to get up to speed on testing and tracing, is afraid to lead a federal response, so he has turned the response over to the state governors, many who are showing him up.  Trump faces a seriously broken economy that was partly the result of his botched response to the pandemic.  I could go on.  His response to the pandemic has been nothing short of a huge, chaotic disaster.

For a man who wants to be successful, loved and adored above all, it must gall him that he cannot get those approval ratings he wants in the high 50s and 60s achieved by other “wartime” presidents and the governors across the country who are working to get PPE, ventilators, masks, tests and trying to keep people from dying in their states.

To Trump’s mind, it is impossible to understand why he is not beloved (because he has no insight) and he thinks it is totally unfair to him.  Trump is the grievance president because of that sense of constant unfairness born of his own inadequacies.  Why is this unfair thing happening to him, he thinks?  Then his paranoia kicks in and provides the answer: this could only be happening to him because he is being undercut by the “deep state”, the enemies, the left, the Dems, the press, those black and brown people etc. And because he thinks he is being attacked most of the time, he attacks back first to protect himself.

And in point of fact, Obama has been slowly emerging from silence and has started to critique Trump. He commented in a closed door phone call of supporters and former staffers that Trump’s response to the pandemic was a “chaotic disaster”. That information was leaked to the press. Then Obama made another critical and pointed remark in a recently televised commencement speech for 2020 graduates:

Doing what feels good, what’s convenient, what’s easy, that’s how little kids think, Obama told a multi-network and multi-digital platform audience of millions of high school seniors who won’t have an in-person graduation this year due to the COVID-19 pandemic. “Unfortunately, a lot of so-called grownups with fancy titles and important jobs still think that way,”

“That’s why things are so screwed up,” Obama said, noting the flailing response and financial free fall to the fatal virus “pulled back the curtain” and has “laid bare a lot of our country’s deep-seated problems. In another comment that sounded like a jab at the notoriously self-absorbed Trump, Obama went on to point out that in his view “our society and our democracy only work when we think not just about ourselves, but about each other.”

Obama took another swing at the unmentioned Trump for not only not having “all the answers” but “not even asking the right questions.”

Barack Obama checks a lot of boxes for Trump in terms of being the villain Trump wants to attack and get even with.  Obama is smart. Black. Self-confident. He did a great job as president- the country recovered from economic disaster under his watch. He was a strategic thinker. He was and is beloved. Obama is like a favorite sibling who is loved the best by Mom and Dad (the country).  Consequently Trump is horribly jealous of him.  What Trump does when he is faced with bad or uncomfortable internal thoughts and feelings that bubble up inside of him is to create a magical solution and explanation in which he himself is blameless and the object of his anger is to blame. Trump projects his own bad feelings onto the other person.  In this case he has dreamed up a vast conspiracy against himself which he is calling Obamagate.

What is Obamagate? Trump is not telling us.  There are no specifics for this hideous crime. And no wonder since they don’t exist in reality or fact.  But Trump tells us it is the biggest most horrible thing ever.  In fact what is the biggest and most horrible thing ever is Trump’s desperate psychological thirst for revenge against (to his mind) the unfairly beloved Obama.

Obamagate is also one of Trump’s opening forays against Joe Biden in Trump’s re-election effort. He thinks that if he can successfully throw shade on Obama and damage his image, he can also damage Joe Biden in the minds of potential voters.

Trump is also trying to clear Michael Flynn’s name. So one of Trump’s accusations is that part of the Obamagate conspiracy was that the Obama administration falsely accused Flynn of lying to the FBI to damage him, Trump, as he was transitioning into the presidency.  The fever dreams of the right-wing are that Obama did something underhanded to Flynn to undermine Trump. So these conspiracy hatchers and Trump have insisted on unmasking Flynn’s name in the underlying documents in which Flynn communicated with the Russian ambassador . The idea was that Flynn was being set up by the Obama administration in some way.  However, Trump hit a brick wall today with that accusation.  Turns out Flynn’s name was never masked in the first place. There was nothing to unmask.

What we can expect as the campaign continues is that the more frightened Trump gets that the Senate could flip and that he could lose the election, the more fearful and scared he is, the more he will fall back on the primitive part of his brain. Fight or flight in reaction to danger? Trump will always choose to fight. And if there is a conspiracy theory he can latch onto to make himself feel better and to inject toxicity into the minds of Americans who like Barack Obama or Joe Biden, then he will push that conspiracy theory as far as he can go with it without any regard whatsoever for truth or accuracy.

Are Americans going to respond the way Trump expects them to?  Will Trump’s Obamagate or other conspiracy theories about Obama actually work to dirty up Obama? or Joe Biden? Will Trump be able to damage Biden using the tactics he used to damage Hillary Clinton? Have Americans learned anything from 2016?

What do you think?