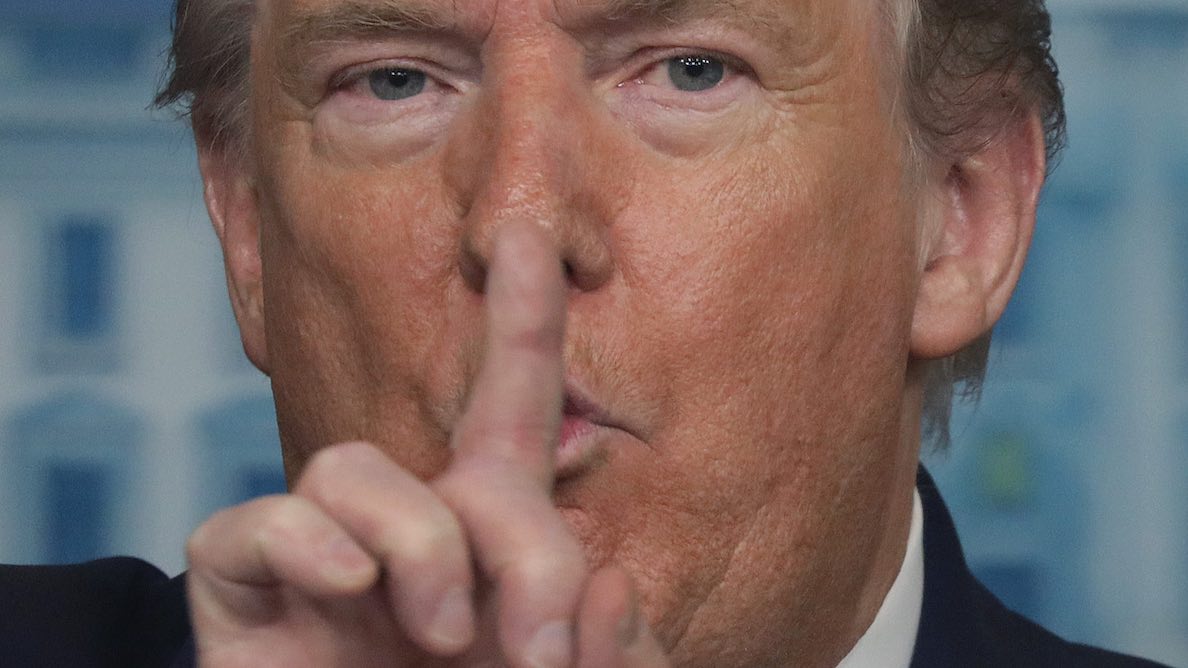 On Monday, May 19, Trump told reporters that he is taking hydroxychloroquine and another supplement to ward off the coronavirus. That caused a media ruckus because this flies in the face of current science and medical advice and, given that Trump has a heart condition, it might actually kill him. According to sources in the White House, and Trump’s own statement, he started taking these pills every day after being exposed to Covid-19 by one of his military valets, a man who interacted with him daily and served him his food.

Trump claims he had a conversation with the White House doctor about taking this drug as a preventative measure.  The White House doctor verified they had a conversation but not whether he prescribed it for Trump.  You might remember that Trump raised something similar before with Dr. Birx, asking her whether it could be a good idea to ingest Chlorox or use some form of internal radiation to eradicate the virus.  Dr. Birx looked pained at the time.  She knows that ingesting Chlorox could kill you, but Trump really seems dense about this and apparently he does not understand how a cleaning agent that works to eradicate a virus on your hands or on a metal surface could kill a human being who is dumb enough to ingest it.

Trump’s announcement that he himself has been taking the drug has caused a flurry of responses.

Joe Scarborough (Morning Joe) does not believe Trump is really taking hydroxychloroquine. He thinks Trump is using this bombshell as a distraction.  Chris Cuomo (CNN) agrees with Morning Joe, but these are two men who are logical and do not think like Trump when it comes to fact based evidence.

Neil Cavuto of Fox News was very upset by Trump’s claim and warned viewers NOT to take this medication.  “It will kill you.  I cannot stress this enough”.  Based on a number of studies including one at the VA Hospital, in which numerous patients took the drug and died, hydroxychloroquine might in fact kill you because it increases the risk of heart attack in people with pre-existing conditions.

The medication can have other serious side effects. Hydroxychloroquine may cause neuropsychiatric symptoms, “including agitation, insomnia, confusion, mania, hallucinations, paranoia, depression, catatonia, psychosis, and suicidal ideation.” If Trump is in fact taking this drug, has his internist checked Trump out for his potential to get dangerous side effects?

Nancy Pelosi’s reaction to Trump’s announcement that he has been taking this drug was priceless: “I would rather not be taking something that has not been approved by the scientists especially in his age group, and in his, shall we say weight group ‘morbidly obese’ they say.” Nice shade, Nancy.

Joe Biden’s reaction was an eruption of  horrified exclamations: “What is he doing? What in God’s name is he doing?” “This is absolutely irresponsible.” “It’s like saying maybe if you inject Clorox into your blood it may cure you. C’mon, man!” “The words of a president matter.”

Lawrence O’Donnell says he thinks that Trump was just trying to swipe at Dr. Rick Bright. Bright testified before a Senate committee that he was ousted from BARDA as the leading scientist working to develop a vaccine because he refused to green light and fast track hydrocholoquine for extensive use without adequate testing. Well established scientific protocol requires extensive double blind testing to be sure the drug does more good than harm to people with Covid-19. A study in a Veteran’s Hospital ended after a number of Covid patients died of heart attacks after taking hydroxychloroquine.  Trump has brushed that off saying it was a study done by people who did not like him.  What else is new- that idea about things being false because people are out to get him comes right out of Trump’s usual  paranoid playbook.

Still other commentators wonder if Trump is promoting this drug to help friends who have a stake in companies that sell hydroxychloroquine.  Fox News host Laura Ingraham as well as other Fox News personalities Carlson and Hannity. were pushing this drug big time on Fox News for awhile, but abruptly stopped a few weeks ago after it was shown to be linked to heart attacks and death in some Covid patients.  You have to wonder if they had a stake in companies selling the drug.

And how about Trump’s own family? Do they stand to make money from the sale of this drug? Trump has a long and storied track record of promoting himself and looking for the quick fix  to make a buck.  Trump steaks. Trump hotels. Trump golf courses. Trump University. It would be consistent with his usual approach to life to want to make money off of a fast cure for Covid-19. He says he has no stake in the drug.  But do we believe him? Trump has been caught making over 17,000 false and misleading statements.  Hmm. Not a good track record.

Because Trump is such a liar, we may never know for sure if he is or is not taking hyroxycholoquine.  He might be saying this to get the libs upset. Trolling the libs seems to be one of his main goals in life. But if that is his motivation he has sorely misread the libs. If and when Trump keels over dead from a heart attack because he took hydroxycholoquine, the libs will be dancing in the streets. Ding Dong the Witch is Dead.

And speaking of death, Trump is losing the support of older American voters over 65, a crucial part of his voting base, who are afraid this virus could kill them and that Trump is not protecting them.  Trump’s losses with this demographic correlate to his coronavirus briefings. Those briefings showcased Trump’s divisiveness, misinformation and lack of leadership.

Everyone wants the economy re-opened, but other countries are doing a better job of it with massive testing, tracing and isolating to identify the sick and keep the sick away from the well.  Without testing and tracing, the well have to isolate themselves from the rest of the world to stay safe.  That includes older Americans at risk by reason of their age.  Our government is also screwing up by re-opening without regard for the data and numbers that should be the drivers and indicators of which regions are ready to re-open and which are not.  This is not sitting well with seniors who vote.

Mr. Trump’s advantage with older voters has been essential to his political success; in 2016, he won voters over the age of 65 by seven percentage points, according to national exit poll data.

A recent Morning Consult poll found that Mr. Trump’s approval rating on the handling of the coronavirus was lower with seniors than with any other group other than young voters. And Vice President Joseph R. Biden Jr., the presumptive Democratic nominee, in recent polls held a 10-point advantage over Mr. Trump among voters who are 65 and older. A poll commissioned by the campaign showed a similar double-digit gap.

The falloff in support comes as Mr. Trump has grown increasingly anxious about his re-election prospects, with a series of national surveys, as well as internal polling, showing him trailing in key states. (NYT)
Whether Trump himself is really taking hydroxychloroquine or only pretending to, simply by claiming that he takes it, he is encouraging his loyal base to protect themselves against Covid-19 by taking this stuff. Trump has also ordered his campaign to re-start the mega rallies he loves so much, which would pack in his followers together in large numbers, exposing them to the virus which is transmitted mainly by aerosols produced when people breathe. You know, Trump is getting mighty close to channeling cult leader, Jim Jones, who got his cult followers in Jonesville to “drink the Kool Aide”, which was laced with cyanide, and, as we all know, those cult followers are now dead.  You have to wonder if Trump doesn’t care if some of his cult base have heart attacks and die from using hydroxycholoquine and others contract Covid-19 from attending his rallies. Could it be he is so desperate to win he would sacrifice any number of his followers? Is he capable of that level of betrayal? What do you think?