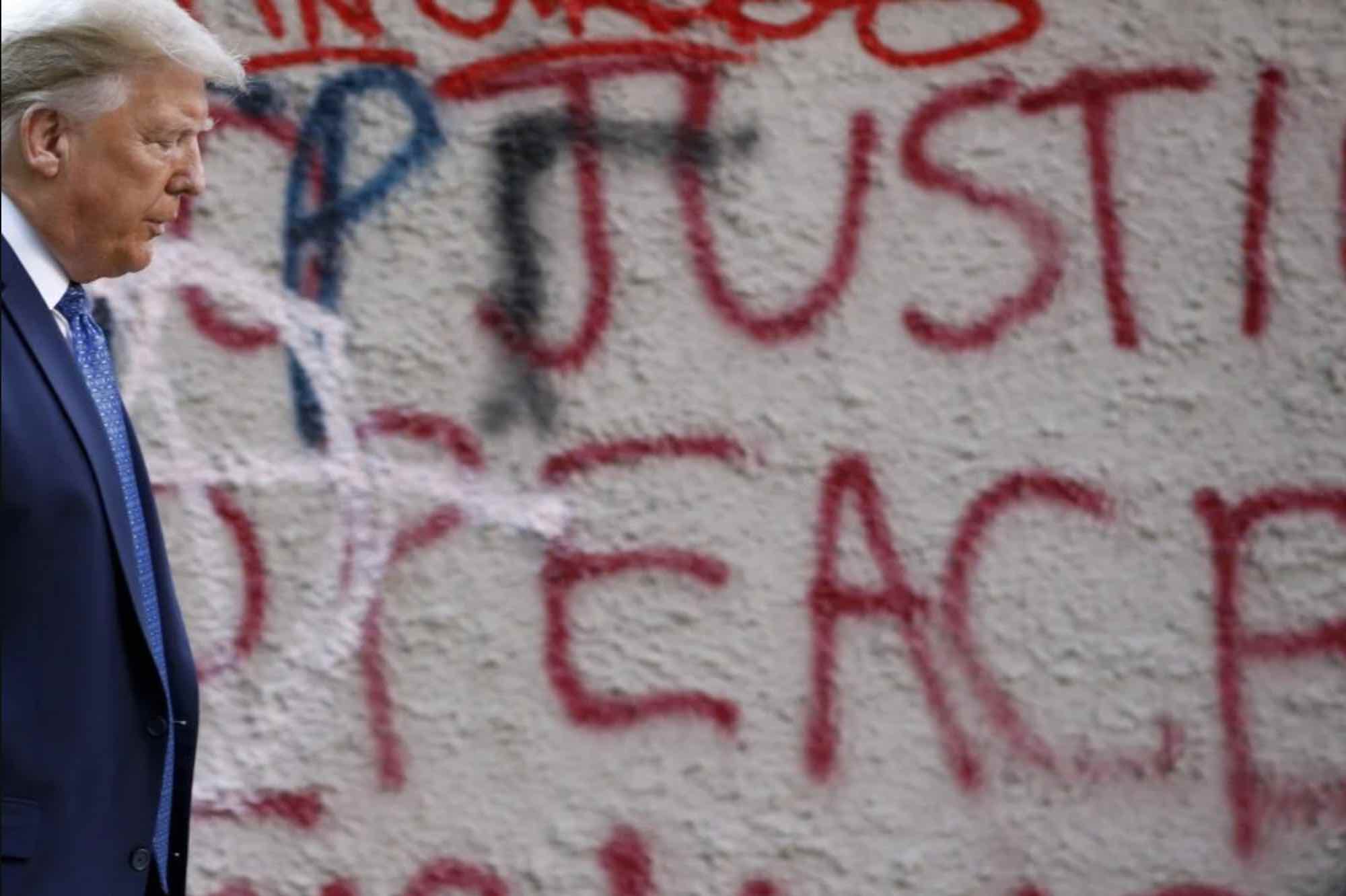 America is reeling from multiple crises. The murder of George Floyd by a white policeman, with three other cops who were accessories to the crime, was the last straw for many Americans.  Floyd’s death unleashed pent up frustration and anger especially in many younger Americans of all racial backgrounds. Many of them face futures that are perilous because of the pandemic and Trump’s mishandling of that crisis resulting in massive unemployment and economic insecurity. Anger and frustration has been growing over the past few months during the pandemic shut down.  It is bubbling over now.

There have been protests in every state across the country this past week.  The protests have mainly been peaceful expressions of First Amendment rights. But there are also some bad actors that have infiltrated these peaceful protesters and have engaged in criminal acts: looting, burning cars and buildings, and attacking the police. Some are taking advantage of this moment because they are anarchists. Some are white supremacists pretending to be Antifa members and seem to have fooled the president into thinking that they are left wing groups.   Twitter reported this development and took down this account. dition.cnn.com/2020/06/02/tech/antifa-fake-twitter-account/index.html?ncid=newsltushpmgnews

AG Barr erroneously claimed the damage was the result of left wing ANTIFA groups, failing to mention the right wing groups including a gun toting group with the unlikely name of Bugaloo Boys. That false information was echoed by Trump’s communications mouthpiece, Kayleigh McEnany. Yes, there were outside agitators involved in the protests, but they were from BOTH the radical left and right. White supremacists and left wing groups were both trying to hijack what were mainly peaceful marches for their own radical goals and purposes.

These instigators need to be arrested and punished. But they should not be confused with the peaceful protesters exercising their First Amendment rights who want social justice.

We know that Trump will never condemn the acts of a white policemen because he has to rely on the votes of white supremacists to get reelected.  At this point Trump has abandoned all pretense of being the president of all Americans.  As the streets near the White House were boiling over with protesters and police clashing with each other, the White House lights were turned off.  The White House went dark. What a perfect image for the absence of moral leadership in America.

In the beginning of this crisis Trump tweeted out incendiary messages “when the looting starts the shooting starts” (a famous quote from a racist in the 1960’s) that Twitter rightly labeled as “glorifying violence”.  He tried to change the subject, cutting off funding for the World Health Organization and heating up the battle with China so that he can tell his base he is tough on China.

On Friday night numerous fires and street battles between police and protesters in Washington DC were close enough to the White House to cause Trump to have to retreat to a basement bunker for about an hour. This was a huge embarrassment for Trump, who wants his image to be that of Macho Man, the song he plays at his rallies and appearances.

Then Trump had a phone call in which he berated the governors for not being tough enough on violent protesters. He told them to “dominate” the protesters and said if they did not, he would call in the military.

Monday in the Rose Garden Trump finally addressed the nation not to calm the storm as our country reels from multiple crises: pandemic, economic collapse, protest in the streets, but to issue a threat that he would use the military against American citizens who are protesting. Trump says he supports peaceful protesters but if that’s so, then why did he have the police violently clear away peaceful protesters as well as Christian faith leaders who were passing out water and snacks to protesters in front of St. John’s Church in Lafayette Square? US Secret Service, Park Police and National Guardsmen used tear gas, flash bangs, and violent physical force on the protesters; they tear gassed the Reverend Gini Gerbasi and seminarian Julia Domenick, driving them off the church property violating their religious freedom. This was done on the orders of AG Barr without any advance notice or warning.  It was done so that Trump could walk over to St. John’s Church where he posed with a Bible for a photo op for the benefit of his reelection campaign.  As Biden said on Tuesday, Trump should open the Bible some day and read from it instead of using it as a public relations prop.

For Trump it is always Us v Them. He not only likes the fight, he needs the fight for his own political ends. Trump is ginning up fear to get re-elected.

Remember the caravans of 2018? He needs fear of the rise of black and brown people to frighten white people into voting for him, the strong man who will save them.  Trump also threatened to invoke the Insurrection Act of 1809, which he claims allows him to send the military into our cities to attack American citizens. Governors are pushing back on this idea, saying that they have things under control and are not inviting the military into their cities.

Trump has done much to undermine positive change when it comes to policing in the past 3 years of his administration.  Just as with Obama era protections Trump eliminated that would have helped to protect us from the pandemic, Trump and his DOJ also eliminated the Obama era programs created to alter the “pattern and practice” of systemic racism in our justice system.

American carnage. That’s what Trump claimed the United States had descended into before he won the presidency.  Before he took office our nation was a democracy that wasn’t perfect but it wasn’t carnage. What Trump is doing now by claiming himself to be the law and order president and threatening the use of military armed forces if governors do not “dominate” the protesters, is bringing us closer to the brink of actual carnage.

We urgently need societal change that radically overhauls our broken justice system.  There is only one way to get that done.  The see no evil, hear no evil Republican enablers of Trump are totally incapable of working towards the change we need.  If the Democrats led in the Senate this would not be happening. Mitch McConnell is the reason Trump is unchecked. To get the change we need, we need Democrats elected across the board in federal, state and local government.  A Biden presidency would empower that change we need.

What did Joe Biden say and do?

Joe Biden went to the site of weekend protests in Delaware to listen to and talk with local leaders about reform. He released a video and written statement  demanding justice for Floyd. He did a series of interviews with CNN, MSNBC, and PBS condemning racial injustice and explaining his vision for response that includes bringing our country together.

Below is Biden’s response to the death of George Floyd.  I hope you will read it to understand how he would provide moral leadership for our country unlike Trump who needs to agitate fear to be reelected. Also listen to Biden’s inspirational speech delivered Tuesday morning.

Once again — the words “I can’t breathe.”

An act of brutality so elemental, it did more than deny one more black man in America his civil rights and his human rights. It denied his very humanity. It denied him of his life.

Depriving George Floyd – as it deprived Eric Garner – of the one thing every human being must be able to do: Breathe.

So simple. So basic. So brutal.

We’ve spoken their names aloud. Cried them out in pain and horror. Chiseled them into long suffering hearts.

They are the latest additions to an endless list of lives stolen–potential wiped out unnecessarily.

The original sin of this country still stains our nation today.

Sometimes we manage to overlook it, and just push forward with the thousand other tasks of daily life. But it’s always there.

We are a country with an open wound.

None of us can turn away.

None of us can be silent.

None of us any longer can hear those words — “I can’t breathe” — and do nothing.

We cannot fall victim to what Martin Luther King called the “appalling silence of the good people.”

Every day, African Americans go about their lives with constant anxiety and trauma, wondering — who will be next?

Imagine if every time your husband or son, wife or daughter, left the house, you feared for their safety from bad actors and bad police.

Imagine if you had to have that talk with your child about not asserting their rights — and taking the abuse handed out to them — just so they could make it home.

Imagine having the police called on you – for just sitting in Starbucks or renting an Airbnb or watching birds.

That is the norm for black people in this nation — they don’t have to imagine it.

The anger and the frustration and the exhaustion — it’s undeniable.

But that is not the promise of America.

And it is long past time we made the promise of this nation real for all people.

This is a national crisis, and we need real leadership right now.

Leadership that will bring everyone to the table so we can take measures to root out systemic racism.

It’s time for us to take a hard look at uncomfortable truths.

It’s time for us to face the deep, open wound we have in this nation.

We need justice for George Floyd.

We need real police reform that holds all cops up to the high standards that so many of them actually meet — that holds bad cops accountable, and that repairs the relationship between law enforcement and the community they are sworn to protect.

And we need to stand up as a nation — with the black community, and with all minority communities — and come together as one America.

That’s the challenge we face.

And it will require those of us who sit in positions of influence to finally deal with the abuse of power.

The pain is too immense for one community to bear alone.

With our complacency, our silence — we are complicit in perpetuating these cycles of violence.

Nothing about this will be easy or comfortable. But if we simply allow this wound to scab over once more, without treating the underlying injury — we will never truly heal.

The very soul of America is at stake.

We must commit, as a nation, to pursue justice with every ounce of our being. We have to pursue it with real urgency. We have to make real the American promise, which we have never fully grasped: That all men and women are not only equal at creation, but throughout their lives.

There is a reason Biden is 10 points up over Trump in the latest national polls  53% to 43%.  Americans are paying attention to politics and power in this country in a way that they did not before these crises affected them personally. The Trump administration is a disaster.  America needs a real leader.  Get out the vote for Biden. 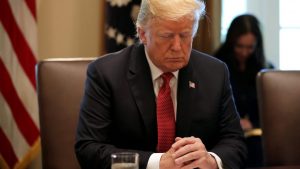 Previous post What’s Up With Trump’s Sudden Love of Religion? 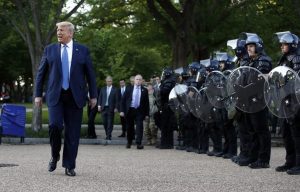