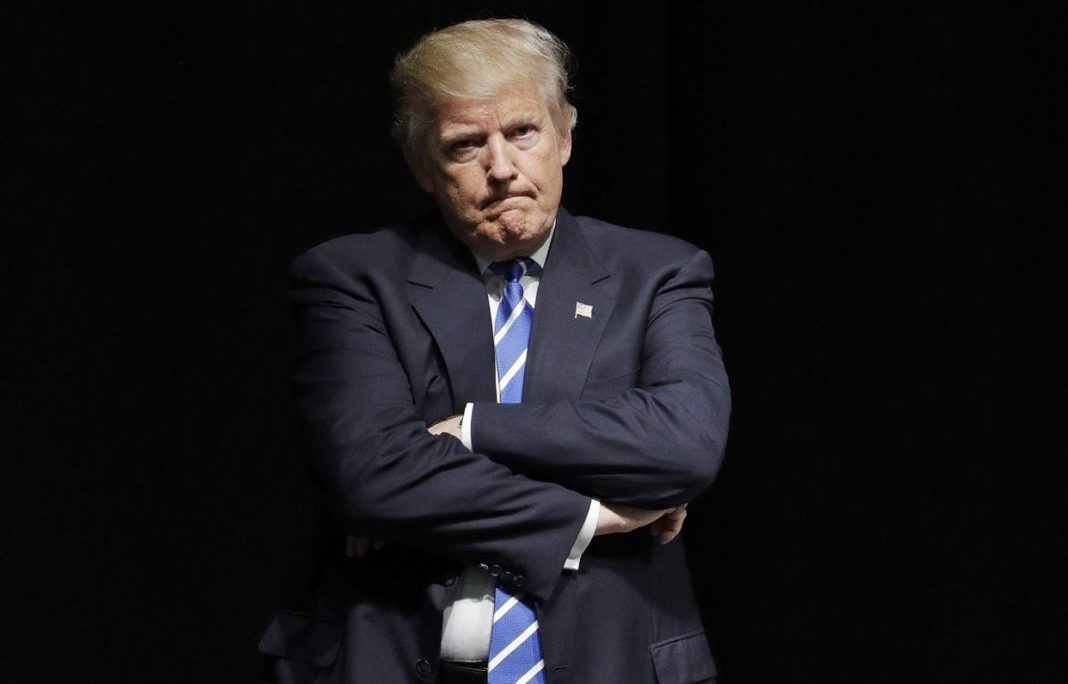 Trump, our grumpy, whiny president, who has been cooped up in the White House because of a pandemic he falsely claims is fading away, was itching to appear before an adoring crowd to feed his insatiable need for attention.  So he told his re-election campaign to put together a massive “I’m Back and Better Than Ever MAGA” rally in Tulsa, Oklahoma.  Tulsa, Oklahoma is the site of a horrific massacre of some 300 black people.  White supremacists torched 40 square blocks of Greenwood, a black district called Black Wall Street.  It was Trump’s rally at that location that gave rise to a lot of negative feelings as you could imagine. As the event neared, the day was changed at the last minute. It had originally been scheduled for Friday, June 19th, “Juneteenth”, a day that is also special for black Americans.  Trump’s rally was moved to Saturday, one day later, knowing the Juneteenth protesters would still be in Tulsa.

Unless you are living in a cave, you know that Black Lives Matters activists have been organizing and leading massive peaceful street marches across the country for close to a month now to force federal and local lawmakers to change policing in our country. These marches are supported by a majority of Americans who want to re-think and re-imagine policing in the wake of a series of gut wrenching murders of black men and women by white police officers.  Juneteenth in Tulsa is a day that has powerful meaning for black people in this country.  Many believe Juneteenth should become a nationally recognized day to commemorate the end of slavery in our country.

It seems likely that Trump’s re-election team was aware of this and understood the potential for violent clashes in the streets of Tulsa between Trump supporters and BLM activists.  Trump has been egging on his supporters and ginning up violence.  He seems to be aching for a fight to erupt. He wants this violence so that he can say the radical left is dangerous and Americans should vote for him, Donald Trump, to save them from anarchists and antifa.  This is part of every tyrant’s playbook.  Fear. Vote for me out of fear.

So Trump’s re-election team got to work setting up a rally in Tulsa. Thousands of people were signing up to get tickets to come to the rally at the new BOK Center, and signing a waiver that they wouldn’t sue Trump if they got Covid. As the numbers went up and up, Trump was on cloud 9. He crowed that the rally would overflow the 19,000 seats of the BOK Center. They expected 40,000 then 300,000 and then they expected maybe a million!

On the day of the rally, Trump was looking forward to a huge successful event to reinvigorate his re-election campaign with so many followers and supporters that a second outdoor rally was planned for an overflow space outside of the arena after the indoor rally inside the BOK Center.  And maybe there would even be a big brawl between his supporters and the protesters!  It looked like Trump and white supremacy was about to make a big big come back.

And then Trump’s very bad week got even worse.

On Friday night, the edifice of Trump’s anticipated success began to crumble when the Attorney General, Bill Barr, summarily fired the US Attorney of the Southern District of NY, Geoffrey Berman. Berman had replaced Preet Bahrara as US Attorney of SDNY, an office famous for its independence from the Justice Department, an office that would pursue crime without fear or favor.  This was the office that prosecuted Michael Cohen, Trump’s former fixer lawyer, and had been investigating Rudy Guiliani ever since Ukrainegate happened.

So on Friday night, as so often has happened with this administration in an attempt to avoid prime time news coverage, AG Barr, Trump’s current fixer lawyer, summarily fired Berman without giving a reason for doing so. But then Berman shot back, saying that Barr could not fire him and that he would be staying on until the Senate appointed a new US Attorney. Then Barr fired back again announcing that TRUMP fired Berman, so he better clear out. When reporters asked about his involvement in all of this Trump claimed innocence as every mob boss knows how to do. He said he knew nothing about it. What followed next was some kind of negotiation in which Berman got a concession out of Barr. Instead of replacing him with the head of the SEC, a Trump loyalist with absolutely NO experience whatsoever as a prosecutor, Berman’s second in command would take over to lead SDNY and Berman would leave his post after all.

So, hey! what’s going on here? The best bet is that SDNY is about to indict someone close to Trump, like Rudy Guiliani (they have been investigating Guiliani since Ukrainegate) and Barr got wind of it probably because SDNY is required to inform the head of the Justice Dept (AG Barr) prior to an indictment. That triggered Barr, no doubt, to scramble into action with a cover up. As usual. Barr and Trump are trying to keep some kind of damning information from coming out as we enter campaign season. And Barr is once again trying to protect his mob Boss.

Trump has been on a big losing streak this week. He lost in the Supreme Court with DACA and LGBTQ protections. John Bolton’s book came out and Barr sued to keep it from being published. But a federal judge did not allow the Trump administration (AG Barr again) to prevent its publication.  It was too late anyhow. The cat was out of the bag since the book had already been widely distributed to journalists across the country and its contents were already being spilled all over cable news.

We learned that Trump sold out American workers to the Chinese by agreeing to tariffs that helped China but not Americans and Trump did this so that Xi would help him get re-elected. Essentially the same playbook as Ukrainegate. We learned once again that Trump is a dummy- didn’t know England was a nuclear power and he told Xi he was A-Ok with concentration camps for Uighurs, a group of Muslims in China that China has been persecuting. And there were many more damning revelations in the book.

John Bolton’s book proves Bolton was a traitor because he failed to testify in the impeachment hearing when he should have revealed all of this evidence under oath for the good of his country.  Bolton stands to get millions from the book, but he might face punitive consequences if a court finds that some of the information in his bombshell book should not have been revealed to the public.  The book is a huge headache for Trump because Bolton is respected by conservatives. Even if they like Trump’s judicial appointments and tax cuts for the rich, they are going to have to factor in the truth about Trump from John Bolton who was in the room where it happened and took copious notes.

As if that was not bad enough, Trump’s triumphant return to the campaign trail turned out to be a bust too. That huge anticipated crowd never materialized. Fewer than 6,200 people showed up to see Trump. Not a million. Not 300,000. Not 40,000. Not even close. There is extensive, embarrassing footage taken by every news outlet of empty seats in the stadium; empty BLUE seats, no less, symbolizing the blue wave we could see in November. The outdoor overflow space was cancelled for lack of enthusiasm. The stage was quickly removed. There were no brawls in the streets.

Trump gave his speech to a crowd of mostly maskless supporters who were not all that enthused. He rambled on for about 2 hours. His speech was widely panned as a boring rehash of personal grievances and disinformation. One of the few important things Trump said was that he had told “my people to slow the testing down” because he thinks that doing testing means there will be a higher Covid case count which makes him look bad. For Trump appearances are everything. If there are fewer tests he thinks he can con people into believing our country is doing better than it is at controlling the pandemic. Trump is all about crafting reality not confronting reality and working on real solutions.

So here is an interesting question: why DID so few people show up for Trump’s big comeback rally?  Trump blamed protesters and the media. Of course. The usual suspects. He also blamed “thugs”.  But the truth is more interesting. Turns out a lot of people signed up to come and didn’t come.

Some people might have been worried that 6 people on Trump’s advance team had tested positive for coronavirus and that information was exposed by the press Friday night. But more interesting yet, a number of people had taken to TikTok to spread the idea of getting tickets to the Trump rally (they are free) and not showing up as a way to troll Trump. We don’t know yet how many people trolled Trump this way, but it was probably a pretty large group of young people. They too have been cooped up because of the pandemic and looking for a way to get some kicks.  This next generation knows how to troll on social media. What better way to spoil Trump’s racist party in Tulsa, Oklahoma? Oh, and save a few thousand people from getting coronavirus after the maskless pandemic-denying Trump rally goers return to their homes carrying Covid-19 with them? What could be better than trolling the guy who invited Russian social media interference and fake news to get unsuspecting Americans to elect him in 2016? https://www.nytimes.com/2020/06/21/style/tiktok-trump-rally-tulsa.html

And maybe, just maybe people are also tired of Trump and ready to change the channel. Maybe that’s one big reason he didn’t get his million person MAGA rally.

Trump could lose the popular vote by 5 million but still win the presidency because of the Electoral College if these states pick him over Biden: Michigan, Wisconsin, PA, Arizona, North Carolina, Georgia, Florida, Iowa. These swing states are the key to the presidency.

Want to help kick Trump out?  Support Joe Biden’s campaign at any level you can.  Here is the link to the Biden campaign: https://mail.google.com/mail/u/0/#inbox/FMfcgxwJWXQbppLfWjfdLQFrGVwGGdvg

Or maybe get some tickets to Trump’s next rally and just don’t show up.