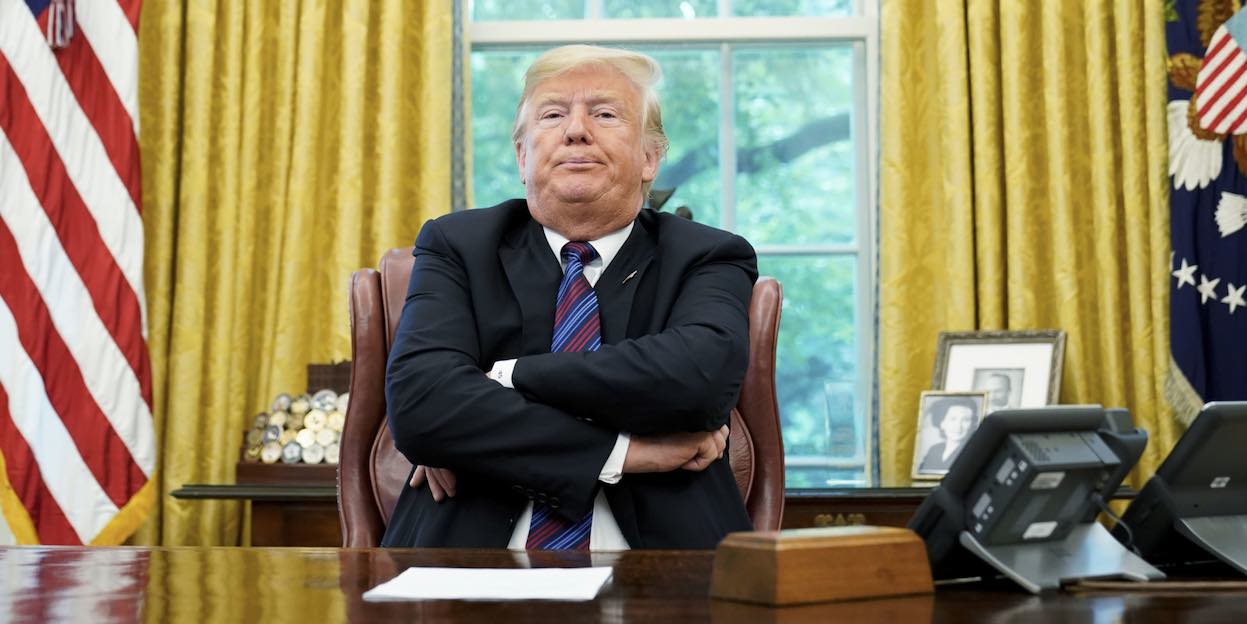 In Chris Wallace’s interview with Donald Trump, Wallace asked Trump if he would accept the result it if he lost the election.  Trump said “Look…I have to see…I’m not going to just say yes. I’m not going to say no.”

After that interview there was much hand wringing about whether Trump would actually pack up and leave the White House if he lost. It is looking more likely every day since Trump is down double digits to Joe Biden including key swing states, is unable to muster a credible response when asked soft ball questions from Fox News host Sean Hannity about his plans for his next term, cannot have rallies because of the pandemic, and cannot effectively launch a campaign to win re-election as long as there is a disasterous epidemic sweeping this country that he has mismanaged for 6 months.

Unless Trump changes his tune radically and consistently, he will not win in November.  Republicans have been screaming at Trump about his falling poll numbers, which is why he decided to have more coronavirus briefings.  Wow. What a great idea.  That went so well last time.  Trump stopped the briefings after he suggested that people ingest disinfectant, which caused Americans to wake up and realize Trump was an idiot and a nut case.  Why they had not realized that before is beyond me. So what could go wrong with a bunch of new coronavirus briefings?

But even if he seems to be changing his tune, will Americans believe he is the guy they want to protect them from a raging pandemic? He would need to admit he was wrong about the pandemic being a few people and going magically away, tell Americans the truth, stop waffling on mask wearing, really wear a mask, increase not limit testing (so the numbers won’t look bad for him), support the CDC and WHO instead of attacking them, allow the CDC to publicize the real case numbers, and let the experts speak directly to the American people.  Think he can carry that off?

He tried to pull it off on Tuesday by holding his first pandemic briefing in three months. The good news? Reading from a prompter Trump admitted it will get worse before it gets better. (Ok, that’s a start. Except he sort of took that back in his second briefing.) And he said it’s patriotic to wear a mask.

1) Neither he or Pence actually wore a mask when they went to an event later that day.

2) He said: “we are in the process of getting a plan” (we are 6 months into this disaster with 143,073 dead Americans who didn’t need to die with a case count of close to 4 million- although it could be 10 times higher than that) – where’s the friggin plan already!!???

3) He still claimed the virus would disappear magically.

4) He did not have any doctors in the room with him informing the public. Dr. Fauci was not invited. Dr. Birx was in the hallway when he did the briefing.

5) He did not announce anything to surge the testing we desperately need.

6) He still called it the “China” virus. He cannot help himself from being divisive.

7) When asked by reporters about Ghislaine Maxwell (Jeffrey Epstein’s co-conspirator in a ring to supply young girls for sex trafficking) Trump said “I just wish her well.” For crying out loud. Sounds like she’s gonna get a pardon like all of Trump’s other criminal friends.

The pandemic is getting worse in our country

Our country is crashing and burning right now because Trump fails to lead 6 months into this pandemic disaster.  The pandemic is taking more lives in red states as well as blue states. 120,000 new Covid cases this weekend. Deaths from Covid in our country is the 3rd highest in deaths per capita.

People listen to this president.  They shouldn’t but they do. Some Trump supporters believed what he said about the virus being something 99% of people get over no sweat because it is just a little sniffles and then poof! you’re all better!  Some of these deluded people have been engaging in risky activities like going to bars and scoffing at wearing masks. Some of them have gotten sick and some have died from the virus. Their family members are telling their stories. This ought to serve as a cautionary tale to people who are Covid deniers. If you have faith in Trump, De Santis, Kemp, Abbott and other Trump mini mes, you do so at your own peril.

Remember that old fart in the golf cart at the Florida Villages complex who raised his fist at a Black Lives Matters protester?  Trump tweeted that out. Ron De Santis bragged that Florida was doing great back in April and the example he gave was the Villages.  Now it’s July and the Villages have been stricken with the virus and the rate of infection has shot up dramatically. There’s extensive community spread. So much for your victory lap, Ron DeathSantis.

While the pandemic rages on in our country it has been almost fully contained in other advanced countries including Europe, Asia, Australia, and New Zealand.  Sweden, which chose NOT to shut down, is currently a poster child for what NOT to do in a pandemic.  They did not avoid economic pain and their per capita death rate is higher than neighboring countries that did shut down.

How Republicans are reacting

Republicans running for Senate in battleground states are running scared. The GOP can see the handwriting on the wall.  It seems to be quietly acknowledging that Trump is flaming out. GOP donors are scurrying to fund Senate GOP races, fearful that there will be a clean sweep by Dems in November- House, Senate, White House.  They are pivoting away from Trump very cautiously, by all accounts, so as not to raise his ire and risk a tweet storm in their direction. Even Laura Ingraham has been predicting Trump is toast. But she did so quietly in a get together of Fox supporters.

The truth is that many Republican Senators would welcome the end of Trump. They have had to pretend to support a man they know is a phony, unfit, inept, a bully and a corrupt would-be tyrant. They would like to be out from under him but they only say that behind closed doors. A Trump loss would free up what’s left of a decimated Republican Party outside of the Trump cult base to speak out and stop living life in fear of Trump. What should terrify the GOP most of all is the long term damage Trump is inflicting on their party. Younger voters despise Trump and what he stands for. Gallup polls also show rank and file long term Republicans ducking out the back door. There has been an 11 point shift from Republican to Democrat affiliation and identification since January.

If Trump would just lose the election in a massive rout, the spell he has cast over our country would be essentially broken.

Why Mitch is the key

If Trump is clearly going down and that becomes inevitable by Labor Day, my prediction is that Mitch McConnell will break with Trump, finally, to try to save the Senate majority. That’s all Mitch really cares about.  HIS power. We are already seeing some cracks in the wall: McConnell wears a mask, disagrees with Trump about cutting funding for testing. More will come. And not just from McConnell.  Other at risk Republicans running for the Senate do not want Trump to come to their state and they do not mention him in their ads.

Biden is playing his cards well

Behind the scenes, Biden is reaching out to moderate Republicans. Looks like he will invite John Kasich to give a speech at the Democratic Convention. This is a really good idea whether you like John Kasich or not. If Kasich voters in Ohio vote for Biden, Trump is toast.

Biden has unwaveringly stood for unity and an end to the bickering and dysfunction in DC, which is what Americans want. They want a functioning country that works for them.  If Biden can move the needle back to normal, avoid the pendulum swinging too far left and work to include everyone he can under a very large tent, Biden could win big in November.

He is building a strong case that he is the president who will rebuild our country back better- with a New Deal approach to help Americans. The thing is this is really truly who he is and what he believes in. If Biden wins big, then Trump will leave more quickly, pouting and tweeting about the unfairness of it all and the deep state yada yada yada.

The bigger the win for Biden in the Electoral College, the better. Republicans will realize that the power of the presidency resides with Biden and they will have to work with him and get along with him. The bigger the loss for Trump the better.  Because if he loses big he will lose his power over the Republicans.

The power shift is the secret to getting Trump out of the White House.

Nancy Pelosi foreshadowed what she will do when Trump loses:

“Whether he knows it yet or not, he will be leaving. Just because he might not want to move out of the White House doesn’t mean we won’t have an inauguration ceremony to inaugurate a duly-elected president of the United States. There is a process. It has nothing to do with a certain occupant of the White House who doesn’t feel like moving and has to be fumigated out of there. Because the presidency is the presidency…so so much for him. I wouldn’t spend so much time on it.”

Biden has faith in the military to do their job when Trump loses and refuses to leave:

Biden is “absolutely convinced” the military would escort Trump from the White House if he loses the election but refuses to leave office.

The Constitution is clear.  Here is what it tells us:

The American Constitution spells out how the transfer of power works. Article II provides that the president “shall hold his office for the term of four years.” The 20th Amendment says that the president’s and vice president’s terms “shall end at noon on the 20th day of January … and the terms of their successors shall then begin.”

If Donald Trump is defeated in November 2020, his presidency will end on January 20, 2021 at noon. Trump would cease to be president immediately upon the expiration of his term.

If Trump refuses to leave, there would be immediate repercussions. The reason is that the president immediately and automatically loses his constitutional authority upon expiration of his term.  He would instantly lack the power to direct the U.S. Secret Service or other federal agents to protect him. He would instantly lose his power, as the commander in chief of the armed forces, to order a military response to defend him. The new president would instantly have those presidential powers. Joe Biden could direct federal agents to forcibly remove Trump from the White House. Trump would be a private citizen. He would not be immune from criminal prosecution.  Biden would have him arrested and charged with trespassing in the White House. It’s true that former presidents enjoy Secret Service protection, but those agents would not follow an illegal order to protect Trump from unlawfully refusing to leave the White House.