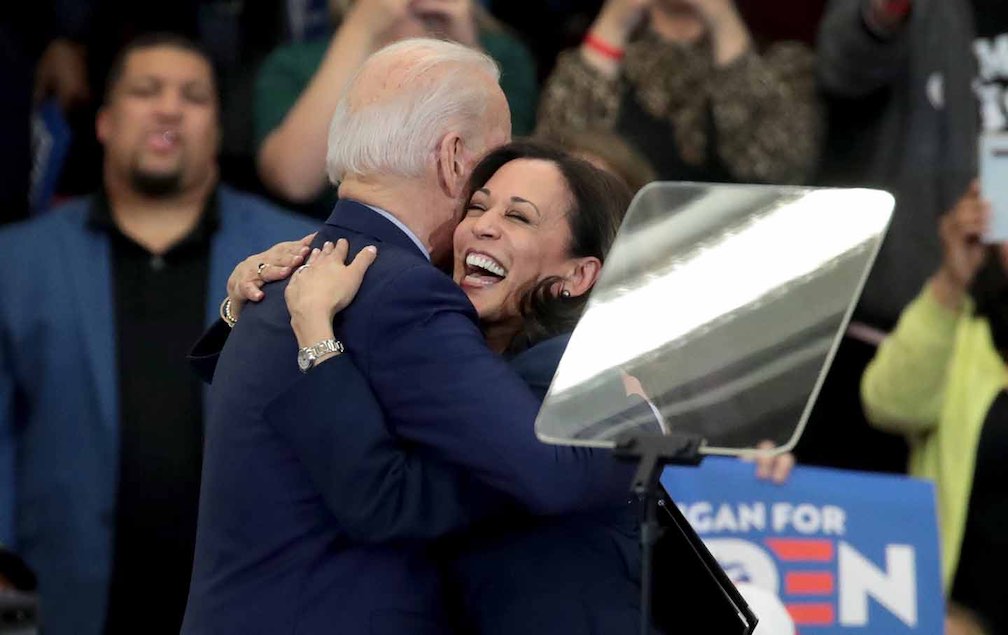 On Tuesday, August 11th, Joe Biden announced Kamala Harris as his running mate.  It was a great choice. It was the right choice. I have met Kamala Harris and heard her talk as well as spoken with her one on one.

Here’s why she is such a great choice.

Harris has experience both as an executive and lawmaker.  Her experience is wide ranging: as a prosecutor, as California’s Attorney General, and as a Senator.  She also has the right personality and disposition.

As a prosecutor, Harris developed the craft of cross examination and it was on display when she sliced and diced AG Barr when he testified before the Senate Judiciary committee in the impeachment hearing and tried to evade the truth. She has the ability to bring a knife to a knife fight.  This campaign will be a knife fight. She will be fun to watch and cheer on. I can’t wait for her to take on VP Pence in the coming debate.

As the Attorney General of California she ran a large office. She was an administrator and by all accounts I have read she did well in that role. The VP needs to be an administrator and also runs a large team. The Attorney General is the official who protects the rights of consumers and she stood up for the rights of consumers in California when she had that job.  Like Elizabeth Warren, Harris has the background and understanding of consumer needs and she has shown herself to be a courageous fighter on their behalf.  In California she took on big oil, for example.  She has been a fearless champion of consumer rights.

As a Senator, she understands the workings of the Hill and knows how to get things done there.  That is crucial knowledge.

Harris brings excitement and glamour to the campaign. She is a standard bearer not only for black women but also Asian women, educated women and people who come from tough backgrounds and by working hard, rise in the world.  She was raised by a single mom. Her Dad was Jamaican American and her Mom was Indian (from India) American. She also stands for an embrace of globalism and a repudiation of Trump’s rejection of immigrants.   In person, she is charismatic. She lights up a room. I like Joe Biden, but he is definitely more charismatic with Harris by his side as a team mate! She ups his game.

Having met her I can say with certainty that she has the following personality traits: she is compassionate, authentic, vivacious, smart, capable, confident, articulate, an excellent advocate and fighter, and she has a fun side, even a sort of sassy, slyly sarcastic side that was captured really well and portrayed on Saturday Night Live when Maya Rudolph played her as in those skits.  She can deliver her barbs with a smile, which is very disarming. I think we are going to see a lot more of Maya Rudolph on SNL now.

Harris was vetted by the presidential process she went through and the early roll out of her  campaign was impressive.  I think she did not gain traction with black voters because voters correctly realized that a black woman running to be president would not have the advantage that an older white man would have with our very mysogynistic electorate. If the key to beating Trump was and still is the Rust Belt, (which I think it is) then no one is better than Joe Biden to take Trump on in those battleground states.  He was a known quantity. Trump cannot effectively portray Biden as a lefty flame thrower because people know Joe. That has robbed Trump of one of his central attacks on the Dems.

Trump will try to portray Harris as a  radical left wing socialist, of course. That was the playbook his campaign was hoping to trot out when they thought Sanders or Warren would win the nomination.  But it is an impossible stretch to say on the one hand that Harris as a prosecutor was too tough on black people and also an Antifa lefty flame thrower.  When it comes to law and order, Harris neutralizes Trump’s claim that he is the law and order guy.  The truth is that Harris understands the criminal justice system because she was inside that flawed system and she knows a lot about how to fix it to be fairer to people of color.  She is the perfect person to take on that initiative and help our country navigate the post George Floyd era with new approaches to policing.

Trump will now try to label her with his usual sexist branding.  He is already at it.  He has called her “nasty”, “phony”, “mean”, “disrespectful”, and a “liar.” And I am sure that is just the warm up to a far more vicious attack on her.  Frankly, I think that any woman Trump calls “nasty” or demeans with his branding should consider that a badge of honor and call it what it is- Trump is afraid. He is afraid of her power, her voice, her strength and her ability to fight back. Trump is a ninny and a whining baby.  He and his surrogates are going to see what it’s like to have a real contender responding to his attacks on the Dems.  I have been waiting for this.

I know that Michelle Obama said when they go low we go high, but that was before Trump broke all the china in the china shop. I want a fighter to speak out about how bad Trump and the GOP really are.  I don’t want anyone to be nice to Trump or the GOP any more.  I think Harris is the perfect person for that job.

Biden also deserves credit for being strong enough to choose a woman who was not afraid to speak out during the debates. She expressed her disappointment in Biden’s past actions that did not support busing and his alliances with known racists. (No, Trump, she did not call him a racist. She specifically said that she knows he is NOT a racist). That Biden could listen to her pain and respond by asking her to join his team, is just what the doctor ordered for our country.  This is an example of the way Biden would handle his role as president.  He would welcome and listen to criticism, learn from it, respond to it and incorporate it in his policies after thinking about it if he agreed with it.

I have also met Joe Biden in person and his wife, Jill.  I think he is what our country needs more than ever in this time of crisis.  He is compassionate and pragmatic, open minded, and has a maturity Trump does not even start to understand.  Biden is not afraid of powerful women.  He likes them. His own wife is a strong woman in her own right with opinions of her own that he listens to.  Biden is a wonderful role model for the next generation of men who are trying to find their way in a changing world where women will be more powerful but do not have to terrify men because they have a voice.

I think Joe Biden absolutely chose the right running mate.  The Biden/Harris team is a continuation of the Obama legacy. In fact Barack Obama recognized Kamala Harris as a rising star when she was the AG in California. Biden’s son, Beau, who was also an AG, met Kamala Harris and thought very highly of her.  They became good friends. Beau would have been delighted with this pick by his Dad if he were alive today. And in everything  Joe Biden does, there is a kind of influence from his son that is almost like a guiding hand. I think Joe Biden decided to run for president because his son really wanted him to.

If Biden is elected- and I think he will be (and I hope we get a clear and convincing landslide so that Trump and the GOP will be expelled with less strife than a narrow victory which they will try to fight in the courts) our country will finally have a team of people in the cabinet governing our country who are truly representative of the multicultural, multiracial country we have become. This would be incredibly exciting and would act as a rebuke to the GOP which has become the Party of the past, a Party of hate and divisiveness not to mention weird conspiracy thinking and bizarre alternate reality thinking.

It was a breath of fresh air to hear Biden and Harris yesterday in their first joint event. They are realists, pragmatists, and they believe in the promise of America. I could not be more thrilled that Kamala Harris is on the ticket.  She should surge the black vote and the youth vote as well. As people get to know her better, I think she will be seen a feistier version of Michelle Obama.