The NYT has published more than two decades of Trump’s taxes. The timing of the reveal, right before the debate, gave Americans important information at a time when they are more likely to be tuned into politics. We are already engaged in early voting (about a million of us have already voted) and we should welcome any facts that could help us decide the future of this country. What are the important take-aways from Trump’s tax returns?

2.Trump is a tax evader and possibly also a cheat. Unlike what he claimed to be, a success in business, Trump was and is now deeply in debt. He did not pay any taxes 10 out of the past 15 years. When he did cough up some money after his election, he paid $750.00 in 2016 and another $750.00 in 2017. That is far less than the average American worker pays in taxes. He also listed dubious gimmicky deductions such as $70,000 for hairstyling and clothing. He paid his daughter, Ivanka, as a consultant in addition to being employed. Trump suckered the IRS into giving him a gigantic refund of $72.9 million. When the IRS realized they had been conned, they sued to get him to return the money. That has resulted in his taxes being “under audit” for years.

From 2005 to 2007, this latest Times scoop reveals, he did finally pay about seventy million dollars to the Internal Revenue Service. But then, in 2010, he demanded a full refund for those tax payments. And the I.R.S. acceded to his request: it paid him $72.9 million, including interest. This 2010 refund seems to be at the center of an auditing dispute between Trump and the tax authorities that has dragged on for almost a decade. It also appears to be the money that Michael Cohen, Trump’s former personal lawyer, was referring to in his 2019 testimony to Congress, when he recalled Trump showing him a huge check from the U.S. Treasury and remarked that Trump “could not believe how stupid the government was for giving someone like him that much money back.” (John Cassidy)

When Trump says he is under audit, he is actually telling the truth. Even so, he could make his taxes public; the audit would not prevent that. But Trump did not want this embarrassing information to get out because it would blow a hole in his phony branding as a successful guy.

3. Above all, Trump is a huge national security risk, which is why we should be worried. Trump owes a massive debt of $421 million to some unknown entity or entities. (That’s $421,000,000 .00!!) The repayment of this debt is coming due in the next four years during his second term if he is reelected. That makes Trump a “mark”. Knowing this, we can understand why Trump has cozied up to dictators like Erdogan of Turkey. He desperately needs the influx of money from these and other foreign entities to his personal coffers. We know Erdogan was considering a Trump Tower in Turkey.

Trump always puts himself first, above the interests of our country. A self-dealing president doing exactly what Trump is doing was one of the nightmares feared by the founding fathers. They wrote the Emoluments Clause into the Constitution to require the president to divest himself and not take gifts of any kind. They wanted to be certain that the president would put the country first over his own self-interest.

But here we are 3 plus years into a presidency where the president has proven himself to be the very nightmare the founding fathers worried about. And we can see pretty clearly in the rear view mirror of history how self-dealing has corrupted Trump’s decisions. Trump’s self-dealing with Turkey most certainly accounts for his foreign policy decision to abandon the Kurds and let Erdogan have his way. Trump has not called Putin out for putting bounties on the heads of our American soldiers. There are bound to be many more foreign policy and political decisions Trump has made to help himself amass the money he desperately needs. Imagine what would happen if a foreign leader decided to buy up Trump’s debt and gain power over him that way? When Trump acts in his own self interest, he is not acting like our president.

Given Trump’s exposure, his vulnerability to corrupt influences, Trump would never have passed an FBI clearance even to work as an aide or in the cafeteria in the White House. Trump has a “for sale” sign on his back. He is a huge national security risk. Foreign powers, it seems. have already been secretly taking advantage of that to get what they want from America.

Nancy Pelosi has noted that “All roads lead to Putin.” It is evident that Russia must have some sort of monetary relationship with Trump that allows Putin to pull the strings with this president. We can finally understand why Trump always puts out for Putin and never disses him. Trump needs the money and Putin is his pimp.

How Trump’s Fake Image Won Him the Presidency

Trump got millions of Americans to think he was a businessman who would make America as successful as he claimed he was. That appealed to voters who were seeing the end of their American dream as mills and coal mines and manufacturing went belly up because of global trade deals that forced Americans to compete with much cheaper labor in the world. These Americans really wanted to believe in Trump. And many still do and will vote for him.

But Most American Women Will Not Let Themselves be Fooled Again

But at this point we know the truth about Trump. Trump is not a business success, not a talented real estate deal maker. And unlike 2016, he has a track record now as president. He has monumentally failed to manage the pandemic.  There are now over 206,000 dead Americans and over 7  million infected Americans. It is estimated that 50 % or more of those deaths were preventable if Trump had done what other industrialized countries did to control the spread of the virus: rapid testing, tracing, PPE, and masks. Our economy cannot recover until and unless we manage the pandemic. We are all paying the price for Trump’s incompetence and self-serving choices when it comes to containing this virus, and will continue to pay until he is out of power. As Americans we ignore the ramifications of Trump’s taxes and what they tell us about the man and his weaknesses at our peril.

Trump won in 2016 on the strength of the low education white blue collar voter. But he is losing the trust and faith of that demographic now. Particularly women in that demographic are turning their backs on him. I think they would say they are sick and tired of the “tweeting” but what that really means is they are tired of all the lying, the drama, the chaos, the lack of empathy, the inability to manage well and the fighting. https://www.washingtonpost.com/politics/2020/09/16/power-up-non-college-educated-women-are-fleeing-trump-minnesota-wisconsin-according-new-post-abc-poll/

Just like Donald’s mother, Mary Trump, these women would probably like to send Trump to military school to learn some self-restraint and manners as well as leadership skills. He is lacking in all of that and more.

But Trump is not capable of a makeover. He is who he is. And who he is a threat to our country. Whatever else you believe about the man, he is a set up for foreign influence. That is the most important takeaway from Trump’s tax returns.  It is a bad idea to vote for a man who is a national security threat to our nation. 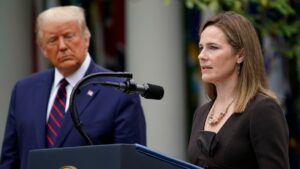 Previous post Appointing Barrett Will Not Help Trump or GOP 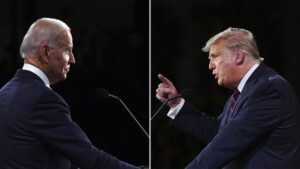