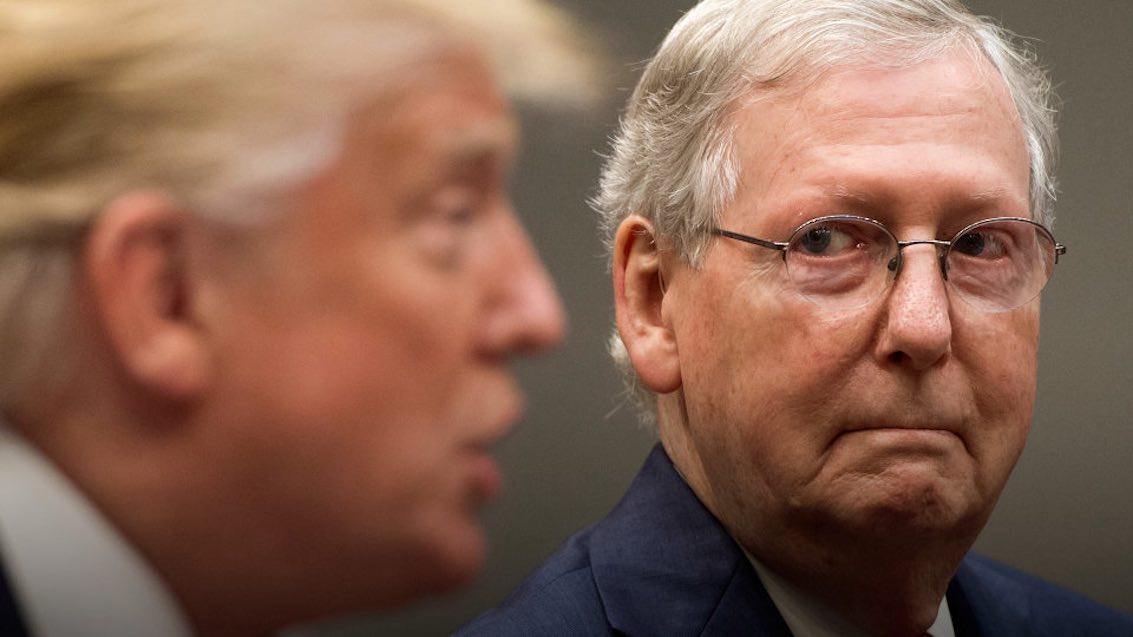 After Donald Trump was acquitted in his second impeachment trial, Mitch McConnell took to the podium in the Senate chamber and delivered what could have been the closing argument for the House Managers. Here is a portion of his scathing remarks:

“There is no question that President Trump is practically and morally responsible for provoking the events of the day,”

“The people who stormed this building believed they were acting on the wishes and instructions of their president,”

“These criminals were carrying his banners, hanging his flags and screaming their loyalty to him. … He did not do his job. … He watched television happily — happily — as the chaos unfolded,”

McConnell said Trump had orchestrated “an intensifying crescendo of conspiracy theories” and described the former president as “determined to either overturn the voters’ decision or else torch our institutions on the way out.”

McConnell suggested that Trump could still face criminal prosecution for his acts.

“President Trump is still liable for everything he did while he was in office as an ordinary citizen,” McConnell said. “He didn’t get away with anything. Yet.” (Thomson Reuters US News)

There Are Now Two GOPs: the Sane and the Insane

January 6th, like 9/11, will be a day that will live in infamy in American history. Trump has left the Republican Party not only battered but fractured. It currently has two factions with different goals and missions.

McConnell wants everyone to know he represents the “sane”, conscientious side of conservative leadership. What he stands for is opposition to everything Biden is trying to do but at least he believes in democracy.

Unfortunately, the insane branch of the GOP is estimated to represent about 75% of the Republican party currently. It has many more millions of fervent voters in red districts across the country that have elected Trump-loving state and local legislators that are busy censuring Republican legislators who voted to impeach Trump. Some of these state legislators were even part of the incitement of insurrection at the Ellipse rally.

57 STATE AND LOCAL OFFICIALS WERE AT THE CAPITOL RIOT At least 57 state and local Republican officials attended the Jan. 6 rally in Washington that turned into a deadly insurrection, according to an updated HuffPost tally. Almost all of them are resisting calls to resign. A couple of officials even gave speeches, warming up the crowd for Trump.

The Trump wing of the Republican Party is driven by fear of the browning of America. It is fine with violence to get their way and could care less about the Founding Fathers. Their one goal is to do anything and everything to keep Trump and Trump supporters in power.  The way they have decided to accomplish that goal is by further suppressing the vote of black and brown people.

In states with Republican legislatures where the people living in metropolitan and suburban areas gave Biden his win (Georgia, Arizona, Pennsylvania, Michigan and Wisconsin) Trump loving Republican legislatures are racing to pass laws to further suppress the vote of black and brown people who are most likely to vote for Democrats.

Brennan Center for Justice found that 106 bills have been filed by Republican lawmakers in 28 states that would restrict voting (the group also found 406 bills in 35 states that would expand voting access). Many of the bills would limit voting by mail, add new voter ID requirements, make it more difficult to register voters and give states greater leeway to purge voter files if voters don’t consistently cast ballots in every election.

Where Was the GOP Fault-line?

For decades the Republican Party has tried to be a political party of unlikely bedfellows: the elite 1% with corporate and ultra-conservative libertarian-tending ideas that were espoused to keep themselves in power and wealthy, and the white, low information blue collar guys in America who have been brainwashed to believe that the Dems are scary socialist Antifa PC police to keep them from voting their own self-interest. At this point, white supremacy and conspiracy theories have become the motivating forces powering the Trump-branded GOP.  The elites are more motivated by power and greed but they have been willing to tolerate Trump and his crazies because they got power with Trump as president. This unstable alliance of elites and Trump cult members in the GOP is collapsing and turning into a civil war of sorts.

Many “conscientious” conservatives no longer feel at home in the GOP.

January 6th was the last straw.

What Trump got his base to do on January 6th was a bridge too far for every sane American including Independents and many conscientious conservative Republicans. It wasn’t just violent rhetoric on January 6th, it was actual violence. Although Trump may try to distance himself from the violent insurrectionists, we already know that Roger Stone has a team of white supremacists (Oath Keepers) who guard him and who were leading a coordinated effort using walkie-talkies and pre-arranged signals in the attack on the Capitol on January 6th. They are being charged with conspiracy. Trump may be another Individual One here as in the Stormy Daniels case, another instance of “collusion” with Trump encouraging people to act on his behalf the way mob bosses do it, or perhaps something even more direct.

People died that day. The Capitol Police were attacked and 140 sustained injuries fighting the mob to protect lawmakers. The Capitol was ransacked. It was an insurrection against the legislative branch, an attempted coup against democracy. And equally bad, from McConnell’s point of view, what Trump did on the 6th made it unlikely for Republicans to win back the suburban voter it must have to prevail in national elections. McConnell knows that. He is both worried and angry at Trump. That’s why he condemned Trump after the acquittal.

McConnell was attempting to separate the “real” GOP from the Trump infested Republican Party. He was trying to rehabilitate it from the smoking ruins of a mob attack on the Capitol incited by a domestic terrorist president and carried out by his rabid, brainwashed supporters and white supremacist extremists.

McConnell could be hoping that Trump’s power will diminish as multiple law suits finally expose Trump for who he really is now that the shield of his presidency is gone. Over time, Mitch would like to think it’s possible to cleanse away the Trump stench from the GOP. But the GOP base is not about to leave Trump any time soon. It is still Trump’s party right now even though it is a toxic brand for more and more Americans, especially those living in the suburbs (the group Republicans cannot afford to lose.) You are too late, Mitch. You should have acted much earlier to stop Trump from destroying your party. You are stuck with “the former guy” as the leader of the GOP.

So What is the Silver Lining?

2. Mitch might want to cleanse the GOP of Trump but he will not be able to do that because Trump is too popular with his base.

The poll of 1,984 registered voters found that 54% of Republican respondents said they would vote for Trump in a hypothetical GOP primary in a survey taken February 14 to February 15, just after the end of his second impeachment trial, a return to the share reported to support the president just before the Capitol riot. (Forbes)

3. The GOP will, therefore, continue to be toxic for suburban America.

4. The civil war going on in the Republican Party will get worse as Trump heats up the fight by going on a revenge tour across the country. He started it already by attacking Mitch McConnell back as an “unsmiling” “hack”.

He will have rallies in which he rages and whines about how unfair everyone is to him and how he is the real president. About 25% of the country will support his revenge tour and believe they were cheated.  This will not make himself or the Trump-branded GOP more palatable to suburban voters.

5. Criminal indictments and civil lawsuits are coming for Trump. He will become even more of a pariah to the portion of America that isn’t brainwashed by conservative media.

6. Republican moderates and conservatives who reject Trump (probably 25% of the current GOP), will need to find a new home separate from Trump’s Republican Party. That may already be in the works.

According to Reuters, more than 120 powerful former Republicans gathered together on a Zoom call last Friday to plot to form a new anti-Trump breakaway party. The report states there were former elected Republicans on the call, as well as ex-officials from the Republican administrations of the past four decades. The as-yet-unnamed party would reportedly run on a platform of “principled conservatism,” and would field its own candidates in some races and endorse center-right Republicans or Democrats in others.

This group might create a “Lincoln Caucus” inside the Democratic Party since they are not a big enough force on their own to be a stand alone third party. Or they might opt to run as Independents.

These tectonic shifts in the GOP do not mean the Trump Republican Party will not win back the House in 2022. Odds are that it will regain control of the House! The Republicans only need to win 6 or 7 seats to take control.

In the last century, there have been 25 midterm elections. The president’s party lost House seats in 22 of them. (NY Mag)

But Biden Could Make All the Difference

Biden is scoring big with Americans. He is working hard to give people what they want and need from government.

A Morning Consult poll shows a Biden approval rating of 62% with registered voters. Just 23% of registered voters think the Republican Party is going in the right direction, while 63% say the party is on the wrong track.

These numbers tell us that Biden is currently winning over Republican leaning Independents as well as some of the sane conservative Republicans with his actions.

If Biden can keep meeting the needs of Americans and show that government works, it is possible that the House will not fall back into the leadership of the insane, Trump infested branch of the GOP in 2022.

In short, the silver lining of Trump’s second impeachment is that it broke the GOP and if Biden can keep giving Americans what they want and need, our democracy can survive the Trump era and emerge stronger.