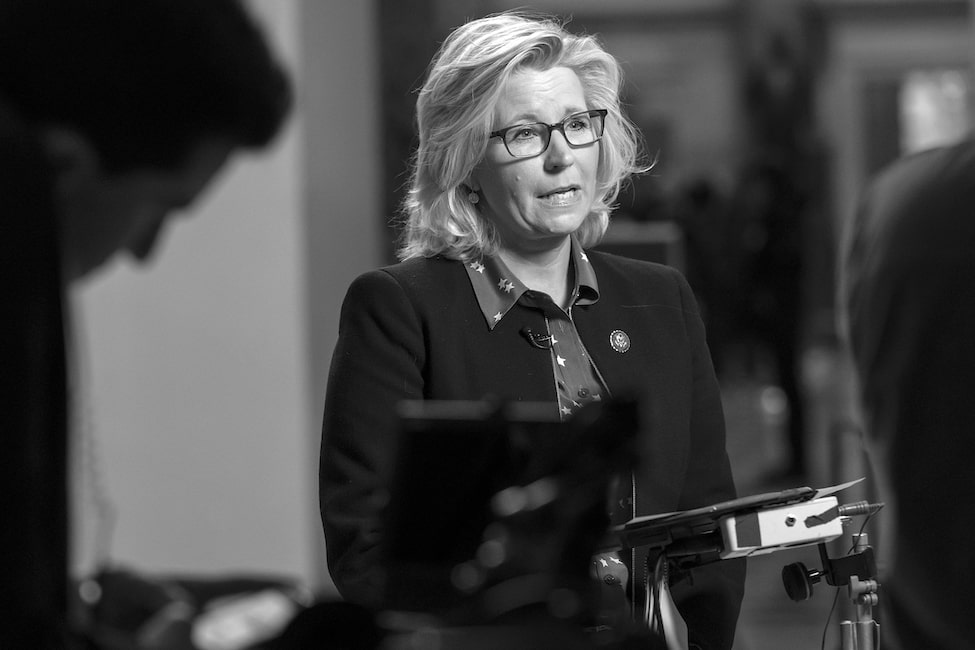 Liz Cheney broke with Trump after January 6th and the Big Lie, and from January until March she has had to pay for additional security for her own safety to the tune of $58K. That’s what happens when you reject Trump and Trumpism. You get death threats because you support the truth.

One of the reasons Trump maintains his stranglehold on Republicans is that Fox “news” hosts like Hannity and Carlson amplify his lies and conspiracy theories but another is that Trump supporters act like Hitlerian brown shirts, threatening people with death if they break with Herr Trump.

Awhile ago Liz Cheney called out Fox News for their disinformation about Trump’s Big Lie on Fox News.

“We all have an obligation, and I would say Fox News especially, especially Fox News, has a particular obligation to make sure people know the election wasn’t stolen,” [Liz] Cheney said in an interview with Fox News anchor Bret Baier.

Brett Baier tried to shut her down but she interrupted him, reclaimed her time and restated her point. Fox News and Republicans have a responsibility to tell everyone the truth and stop coddling people who want to believe the Big Lie.

Thank you very much. This message needs to be replicated by every Republican across the country.

How many times has anyone called out Fox News ON Fox News for being a fountain of disinformation? Let’s just say that is not a common occurrence. Even MSNBC and CNN talking heads don’t usually call out Fox News by name when they talk about dis and misinformation on “some other platform”.

I don’t know why Fox gets a free pass for being a fountain of mis and disinformation but it is friggin annoying because one of the biggest reasons our country may lose our democracy in 2022 is that Fox News is a cesspool of garbage information conveying a warped reality to millions of Americans who support Trump and Trumpism.

Face it. Millions of Americans are brainwashed. That’s even the defense we are hearing from the Trump MAGA mob supporters who stormed the Capitol. Some of them are finally getting it that they were lied to by conservative media and begging for a lesser sentence because the former president misinformed them. At least Dominion and Smartmatic, the voting machine companies, are suing over the disinformation about voting machines and Rudy Guiliani lost his license to practice law in New York over the lies HE told. I guess there is some comfort in these two developments.

We Could See the End of Democracy

Because of this toxic spread of disinformation we are getting more deplorable, delusional, dangerous Representatives like Marjorie Taylor Greene, Paul Gosar, Lauren Boebert, Jim Jordan, Elise Stefanik , Kevin McCarthy and others infesting our government. They are people who, above all else, care about making sure Trumpism (authoritarianism) succeeds in 2022 and beyond. In general, they are for white supremacy (keeping intact the American culture that fosters white privilege) and owning the “libs”. They don’t care about being a Constitutional democracy based on fairness, ethics or morality. This is why the so called wedge issues are the ones that Trump supporters get excited about. They are terrified about the loss of the culture where America First really means White America First.

Fox entertainment network is all about keeping their viewers happy and coming back for more so the ratings stay up. But to do that they have to appease the needs of the older white base who want to maintain an unrealistic, warped view of reality.  70% of Republicans still believe the falsehood that the 2020 election was rigged and fraudulent. It was not. Americans who watch Fox News are intentionally misled and therefore confused about what is real and what is true.

There is a real reality, people. There are facts. There is information that is accurate and reliable. But to be a fully initiated MAGA cult member apparently you have to live inside the Fox/Trump/conservative media ecosystem which is full of hair on fire lies.

It’s not like the conservative media actually cares about the MAGA mob either. If they did they would not have pushed the misinformation that masks and vaccines take away your first amendment rights in a pandemic. That would have preserved some MAGA mob lives. At this point the southern states and Wyoming that are full of Trump lovers are the ones failing to get everyone vaccinated. At this point the people dying of Covid are the people who did not get vaccinated. The party line is that these things take away your freedoms. Meanwhile, I am certain that all the Fox hosts got their vaccines early. Even Trump got a vaccine after getting Covid and almost dying himself. THEY don’t believe the dreck they peddle.

The Republicans have a woman problem. They don’t have a lot of women in power positions. But they really want suburban women to vote for them. When wimpy Kevin McCarthy, bowing to pressure from Trump, decided to kick Liz Cheney out of her leadership role in the House (purge her from the cult) they needed a replacement woman. Liz was replaced by Elise Stefanik , a woman who has learned she can succeed if she obeys– so she obeys.  In Stephanik’s thank you speech she name checked Trump over and over. Clearly Cheney was canceled for telling the truth and because she just wouldn’t shut up and still won’t. (Cancel culture doesn’t only happen on the left). Stefanik took Cheney’s place as the token woman in leadership.

Cheney Picks up the Mantle of Truth

Cheney may be out of power in the House, but she is not about to shut up. Quite the opposite. She is loud and proud about telling the truth: Trump lost. The election was fair. Biden is president. Trump is a danger to the Republican Party and the country. Americans need to go to boot camp to learn what a democracy is and get a lesson in civics. The election integrity argument being used to generate voter suppression legislation across the country is a sham. It’s a way for Republicans to stay in power as a minority party, a cult of personality, not a political party with real policy ideas or concern for the country. Thank you, Liz Cheney. I don’t agree with your politics, but at least you insist on maintaining the moral high ground.

The mission of the ultra rich ultraconservatives like the Koch brothers and Mercers who are powering this movement towards authoritarianism is to elect Trump or some other Trumpian authoritarian type (Ted Cruz, Ron DeSantis and Josh Hawley are auditioning for the part) in 2024, and they will use the voting laws just getting passed now to allow Republican state legislatures and other partisan Republican officials to overturn elections if people they want to win don’t win, disregarding the popular vote. These laws have been passed in Georgia already. The Department of Justice has just announced it will challenge those laws in Georgia.  Unfortunately lawsuits take time… but this is a step in the right direction.

Cheney Sees What is Coming

Liz Cheney may not like the Big Lie but she and her Dad were part of the reason we now have an undemocratic Republican Party. They helped to set the stage for a Trumpian-style dictator to arise. Maybe this is why she can see what’s coming for our country if our democracy is not supported. She is speaking out. She wants to be on the right side of history.

One thing is certain, we have not heard the last from Liz Cheney.  Here are some of her prescient words of warning to America:

“Today, we face a threat America has never seen before. A former president who provoked a violent attack on this Capitol, in an effort to steal the election, has resumed his aggressive effort to convince Americans that the election was stolen from him. He risks inciting further violence.”

In The Atlantic Peter Wehner writes about the demise of the Republican Party and I agree with him–those tribal MAGA mob Republicans who are staying with the party even though it has lost its way and Trump’s approval rating is in the dumper at 32%, are being lied to over and over and over again by a right wing media that sells this unreal world to the misled masses for the sake of maintaining their own power.

[Most MAGA supporters] would argue to their dying breath that they’re defending the truth. The problem is that the information sources on which they’re relying, and that they seek out, are built on falsehoods and lies. Many Trump supporters aren’t aware of this, and for complicated reasons many of them are, for now at least, content to live in a world detached from objective facts, from reality, from the way things really and truly are. And without agreement on what constitutes reality, we’re lost.

After Trump’s defeat in November, and especially after his effort to overturn the election results and the role he played in provoking an unprecedented attack on the citadel of American democracy, Republican leaders could have moved away from the indecency and corruption that defined the Trump era. In their different ways, Representatives Liz Cheney, Adam Kinzinger, and Jaime Herrera Beutler and Senators Mitt Romney, Ben Sasse, and Mitch McConnell have done so. “We really can’t become the party of a cult of personality,” Cheney recently warned. “It’s a really scary phenomenon we haven’t seen in this country before.” But even so, most others in the GOP chose to double down.

What is scary is that even as Trump’s approvals fall generally, his power over what remains of the Republican Party persists.

Cheney’s superpower is that she is telling the truth. I am thankful that she is speaking out now. We need more Republicans like her to speak out. Republicans could have dumped Trump after the election was over but they failed to unite in opposition to Trump. They were cowardly little rabbits, unable to take a stand against the Big Liar peddling the Big Lie(s). But if Trump fades more Republicans might join Liz Cheney.
Maybe. But there is a big impediment to that outcome.
Having alienated college-educated suburban voters, many consequential Republicans decided their best bet is to keep their contracting coalition in a state of constant agitation and fear, combatants in a never-ending culture war, “embattled warriors making a last stand against the demise of everything,” as a friend of mine describes it. And that, in turn, requires them to feed the base even greater falsehoods.
We are in a knock down drag out fight about the truth, reality, facts, and science. Republicans in our country are in denial about all of these. The future of our democracy will be decided by how many Republicans finally turn against Trump and what he stands for.
Liz Cheney is my new favorite action figure not because of her policy ideas but because she is one of the only Republicans with the guts to stand up to the Republican assault on truth, reality, science and facts.