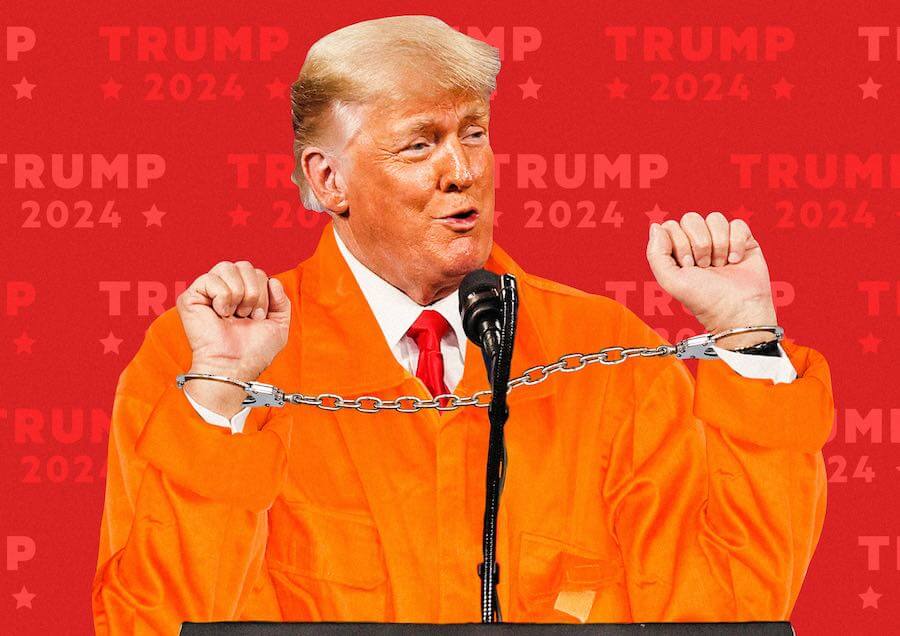 At the end of Trump’s chaotic presidency, he was desperate to stay in power. He knew how bad it could be for him if he was a “loser” not only because he would have to manage his own sense of overwhelming personal degradation, but because he had broken so many laws and rules, he must have known he might actually end up in jail for the remaining years of his life. For that reason, after the election, up until the January 6th attack on the Capitol, Trump obsessively resorted to doing what he does best: namely, bully everyone he could to try to stay in power as president. He tried to influence, force, coerce and threaten people to say he had won the election instead of accepting the truth–that he had lost to Joe Biden. By doing that so blatantly and leaving such a clear trail of evidence including recordings and  statements that expose his intent and will be testified to under oath by people who were trying to prevent him from a self-coup, Trump could end up in jail and face a significant fine as well, especially for what he did in Georgia.

We are still living with the aftermath of Trump’s inability to give up on this overwhelmingly infantile need of his to say he won when he lost. As we all know by now, “Big Lie” has been taken up by Trumpian sycophants in red states to rig state election laws for Trump’s big steal that is coming to mess with our elections in the future unless someone or something stops that. The takeaway from 2020 for Republicans is if you can’t win by appealing to more voters, then just cheat and say you won.  Republican state legislatures are making sure Trump wins in 2024 by changing the rules so that Trump can win by alleging fraud, whether or not there was any fraud, and sending a Trump loyal slate of electors to the Electoral College in 2024.

Trump is notorious for cheating. Cheating is part of his DNA. If you doubt that Trump is fine with cheating to “win”, read Commander in Cheat by Rick Reilly.

Based on Reilly’s own experiences with Trump as well as interviews with over 100 golf pros, amateurs, developers, and caddies, Commander in Cheat is a startling and at times hilarious indictment of Trump and his golf game. You’ll learn how Trump cheats (sometimes with the help of his caddies and Secret Service agents), lies about his scores (the “Trump Bump”), tells whoppers about the rank of his courses and their worth (declaring that every one of them is worth $50 million), and tramples the etiquette of the game (driving on greens doesn’t help).
For Trump, it’s always about winning.

Trump started out the presidency with guardrails, people who were telling him he could not cheat and making sure he listened and followed the rules.  But over time Trump realized he could replace these guardians with people who would say “yes” to him and no harm would come to him.  By the end of his presidency he had gotten rid of people in leadership who would tell him what he should and should not do. He was left without people who acted as guardrails. That probably accounts for the trouble he got himself into in Georgia.

Will Trump Ever Be Indicted?- Georgia Probably Has the Greatest Potential for Holding Trump Accountable

The case in Georgia being heard now by a grand jury in Fulton County has great potential to land Trump in jail. To understand more I recommend reading the Brookings Report on the Fulton County Trump Investigation.

In this report, the facts are recounted, every possible violation of Georgia law is identified, and Trump’s defenses are assessed. Here are some of the key conclusions from that report.

President Trump lost the 2020 election in Georgia by a margin of nearly 12,000 votes,
and that outcome was confirmed and certified by the duly designated election officials in the
state, with Republican Secretary of State Raffensperger and Republican Governor Kemp at the
top of the process. Those officials formally certified the result 17 days after the election
following a hand recount of all ballots cast, which altered the original count by only a few
hundred votes. That result was recertified by Raffensperger on December 7.

Notwithstanding the absence of any facts suggesting irregularity or any reason to
question the result thus certified, the Georgia electoral process and vote count was subjected to
sustained assault by the ex-president and his supporters. Trump led that effort as part of his
repeated insistence that the conclusion of an overall Biden victory was “a fraud on the American
public.” This drumbeat of lies about the electoral outcome began on election day —indeed it
preceded it, as Trump hinted starting in the summer of 2020 that he could only lose if the
election were fraudulent and withheld any commitment to recognize any electoral result that
went against him. While his claims of fraud applied to the nation as a whole and were quite
specific in the context of several other states that Trump had also hoped to carry, his efforts to
change the certified result in Georgia were unusually intense and recurring, and involved Trump
personally in acts that have been documented to a substantial extent.

Trump’s attack specifically directed at the Georgia outcome was multi-faceted and began
even as the vote count was still underway. It was echoed by several U.S. Senators, and by his
lead lawyer, Rudy Giuliani. It also became the grist for a barrage of lawsuits brought by
Trump lawyers or by allies, which over time trafficked in bizarre conspiracy theories which were
discredited by the courts in which they were filed. At the center of this effort were Trump’s
personal attempts to overturn the Georgia result by altering the conduct of state officials charged
with the ultimate responsibility to honestly oversee the administration and certification of the
election.

[The] evidence indicates that the actions that he took
personally included various telephone and in-person conversations, all after the results had
already been certified, in which he:
• On December 5, urged Governor Kemp to help change the outcome through several
actions and attacked Kemp that same day at a rally for his failure to act;
• Urged Georgia’s Republican Attorney General Chris Carr not to oppose a lawsuit filed
December 7 by the State of Texas in the U.S. Supreme Court, seeking to change the
electoral outcome in certain states;
• On December 23, urged the chief investigator in Raffensperger’s office, Frances Watson,
to find dishonesty in connection with electoral complaints her office was then
investigating;
• Engaged in various communications with officials of the U.S. Department of Justice in an
unsuccessful effort to induce the Department to intervene to influence a change in the
result as certified in Georgia;
• On January 2, during an hour-long call with Secretary of State Raffensperger, urged him
to “find 11,780 votes which is one more than we have because we won the state,” and
observed that it was “a big risk to you” and “very dangerous” to insist that there was “no
criminality” in the administration of the Georgia election.

It is an extraordinary tribute to the integrity of the Georgia state officials, whom Trump
forcefully implored to abandon their public trust, that none of them—not a single one—
succumbed to Trump’s efforts to change the outcome of the election. But that fact—which was
critical in achieving the ultimate certification of the election by the Senate on January 6—does
not alter the nature of the conduct that Trump personally engaged in. Nor does it alter the nature
or importance of Georgia’s interest in policing and punishing conduct such as his.

The Georgia District Attorney, Fani Willis, is the One Who Would Indict Trump for Election Violations-She Will Not be Compromised or Bought Off

In our federal system of government which the Founders put in place, the states are
assigned a singular role in the conduct of elections, including those for senators,
congresspersons, and the president. While the federal government has an after-the-fact role in
policing violations of fair and honest voting procedures, it has long been clear that the actual
administration and counting of votes, for federal as well as state offices, is the responsibility of
the states. Thus, the state interest in conducting a fair election, and in making sure that the votes
are tallied fairly in accord with established rules, is the preeminent interest at stake, even where
an election of the president is concerned.

It is therefore not at all surprising or odd that, in the face of conduct like that addressed in
this report, the primary investigative and enforcement effort presently underway is being pursued
at the state level—here by the District Attorney of Fulton County, the locale whose vote tally
would have been most substantially corrupted by the actions that Trump and his allies forcefully
urged. Given the primacy of state responsibility, it is also not surprising that the State of Georgia
has an array of statutes that seem well-tailored to address the conduct at issue.

Here Are All the Georgia State Crimes Trump Could be Charged With- There Are a LOT!

As discussed in Section III, the statutes that can be brought to bear (depending, of course,
on the evidence) include several specifically focused on efforts to disrupt the state’s performance
of its responsibilities to conduct elections. They are: solicitation of conduct by officials that
would amount to election fraud; intentional interference with an election official’s performance
of election-related duties; and conspiracy, meaning an agreement among multiple people, to
engage in electoral fraud. Other possible statutory violations include an array of general
prohibitions not limited to conduct impacting on elections, but rather focused on more broadly
applicable duties encompassing election misconduct of the kind here alleged, such as false
statements in connections with official matters, attempts to influence government officials in
improper ways, solicitation of action violative of public officer oaths, and several other
provisions.

Finally, it is possible, as mentioned in a public statement by the Fulton County
District Attorney, that consideration might be given to action under the Georgia Racketeer
Influenced and Corrupt Organizations (RICO) Act, since violation of a number of the statutes
referenced above constitute predicate acts that are the essential building blocks in developing a
prosecution under that statute.

As a former Assistant States Attorney and Assistant US Attorney, based on my reading of the facts, the evidence, and the law as detailed in the Brennan Report, Trump will not be able to evade prosecution in Fulton County. The question of whether he ends up in jail for what he did will turn on the composition of the jury and the competence of the trial lawyers, because the Fani Willis, the District Attorney, will have a strong case against Donald Trump for misdemeanor and felony election law violations.