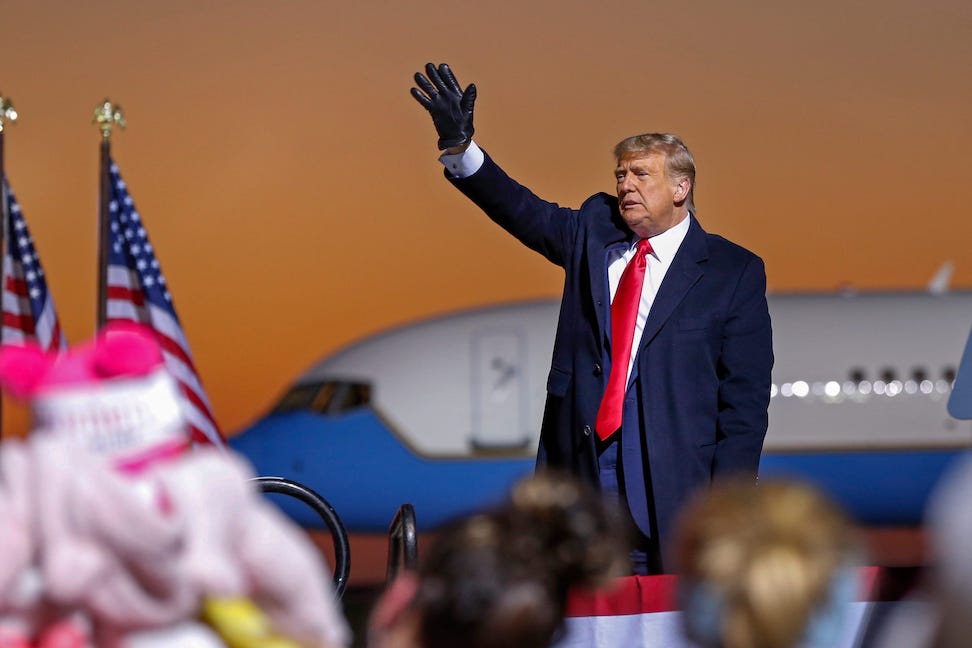 The Republican Party on Friday officially declared the Jan. 6, 2021, attack on the Capitol and events that led to it “legitimate political discourse,” and rebuked two lawmakers in the party who have been most outspoken in condemning the deadly riot and the role of Donald J. Trump in spreading the election lies that fueled it.

The Republican National Committee’s voice vote to censure Representatives Liz Cheney of Wyoming and Adam Kinzinger of Illinois at its winter meeting in Salt Lake City culminated more than a year of vacillation, which started with party leaders condemning the Capitol attack and Mr. Trump’s conduct, then shifted to downplaying and denying it.

On Friday, the party went further in a resolution slamming Ms. Cheney and Mr. Kinzinger for taking part in the House investigation of the assault, saying they were participating in “persecution of ordinary citizens engaged in legitimate political discourse.” (NYT)

If there was any doubt about what the core Republican Party has become the question was settled Friday, February 4th, 2022. The core of the GOP has lost its claim to being centrist and morphed into an America version of Germany’s Nazi Party.

“Legitimate public discourse?” Are you friggin kidding me!?

January 6th was a violent insurrection on our Capitol where capitol and metropolitan police were viciously attacked and forced to engage in hand to hand combat to prevent Trump’s inflamed mob from getting its hands on lawmakers inside the Capitol who were carrying out their constitutional job to certify the 2020 election. This mob was out for blood, shouting “Hang Mike Pence”. Many brought weapons and had a plan they intended to execute that was nothing remotely close to discourse. These people were on mission to hunt down Nancy Pelosi and other lawmakers with zip ties and weapons with the clear intent to capture and possibly kill them. People died in the attack and some later took their own lives as a result of the trauma. We now know for a fact that Trump and his gang that couldn’t shoot straight, led by Rudy Guiliani, worked every angle possible to overturn the results of a free and fair election. There is no doubt anymore.

The former Republican Party has split into two distinct factions: the extremist wing and the tattered remains of the more moderate  former GOP. But the Nazi Party of Trump is in control of the GOP. It is without policies or ethics. Its only goal is to pander to Trump and take over our government.

The more moderate wing of the GOP was not happy with the gaslighting from Ronna Mc Daniels and saw it for what it was- an attempt to normalize an attack on our democracy.

Many Republicans privately grumbled their own disapproval — and some took their protests public.

CNBC’s Brian Schwartz tweeted out a statement from GOP financer ERIC LEVIN rebuking RNC Chair RONNA MCDANIEL by name and accusing her of setting back efforts to retake the House. Levin said he’s raised more than $1 million for GOP candidates, but that McDaniel’s actions make it harder for him to pump his network for cash. “Not only was the storming of the Capitol on January 6 NOT A LEGITIMATE FORM OF PROTEST, it was criminal behavior warranting prosecution,” he said.

He’s far from the only one. Our David Siders and Natalie Allison have a story up this morning reflecting on the internal frustration with how the RNC is dealing with Trump, whose appetite for revenge, they write, has emerged as “one of the biggest threats to the GOP’s otherwise bright prospects in November.” Members in Salt Lake City this week griped privately about the censure and the RNC’s recent decision to pay Trump’s legal bills related to lawsuits pertaining to his private business dealings, they report. (Politico Playbook)

Others in the moderate wing of the GOP pushed back as well:

It’s a sad day for my party—and the country—when you’re punished just for expressing your beliefs, standing on principle, and refusing to tell blatant lies. (Larry Hogan- Republican Governor)

Shame falls on a party that would censure persons of conscience, who seek truth in the face of vitriol. Honor attaches to Liz Cheney and Adam Kinzinger for seeking truth even when doing so comes at great personal cost. (Mitt Romney)

Representative Tom Rice, another House Republican who voted to impeach Trump last year, tweeted “Someone should definitely be held accountable for Jan. 6. The RNC chose Cheney and Kinzinger?” He then sarcastically finished the tweet with “That makes perfect sense.”

The conservative National Review weighed in too.

Republican National Committee has voted to formally censure Liz Cheney and Adam Kinzinger for “actions in their positions as members of the January 6th Select Committee not befitting Republican members of Congress.” This is both morally repellent and politically self-destructive.

The action of the mob on January 6 was an indefensible disgrace. It is deserving of both political accountability and criminal prosecution. Aspects of it are also fit subjects for a properly conducted congressional inquiry. It is wrong to minimize or excuse what happened that day.

Republicans are being forced to choose which faction to join.

Ben Sasse, for example, said, “January 6th was not ‘legitimate political discourse’ and I’ll say it again: It was shameful mob violence to disrupt a constitutionally-mandated meeting of Congress to affirm the peaceful transfer of power.”

Two Factions of the GOP

The Republican Party core is a white supremacist and militant group responding to the shifting demographics as America moves ever closer to the tipping point when brown and black Americans outnumber white Americans. Moderate Republicans like Adam Kinzinger who accept that everyone in our country are Americans no matter what skin color they are, is being expelled along with Liz Cheney, a far more hard core Republican who will not bend to Trump either.

We can predict what will happen to our country if the extremist version of the GOP regains the House and Senate. It will waste everyone’s time attacking Joe Biden and Kamala Harris instead of helping the American people to have better lives, working to combat climate change or ending the pandemic by convincing disinformed Trumpian Republicans to get vaccinated. Kevin McCarthy and the House Republicans will try to impeach Biden, undermine the DOJ and every other investigation into Trump, and it will do everything it can to pave the way for Trump to return to power in 2024.

Efforts to serve Trump’s wounded ego by attacking his enemies will preoccupy Kevin McCarthy and the House Republicans. If this version of the GOP wins the control of the legislative and executive branch we could not only lose our democracy but our country would also risk losing our economic dominance in the world. Canada and Mexico would see a large influx of immigrants from the U.S. Maybe some currently silent Republicans should think about the potential ruin of more than our democracy should Trump and Trumpism prevail in 2022 and 2024.

Push Back Against Trump, Trumpism

Mike Pence spoke at a meeting of the Federalist Society, pushing back against the chest pounding orange gorilla.

After that, Trump attacked Pence for contradicting him. (What else is new?)

Perhaps more importantly, the January 6th Committee struck back against the RNC by releasing video content directly contradicting the notion that the insurrection was “legitimate political discourse”. It showcased one of the crazed insurrectionists in the middle of the brawl calling for lawmakers to be attacked and dragged out, assaulted, and killed. This man has already pleaded guilty. Many of the insurrectionists who have pleaded guilty understand that when Trump says he will pardon them he is not to be believed. Many of them are said to have turned on Trump because they now believe he used and abused them. They finally get what millions of us knew long ago- Trump is not only out for himself, he is the ultimate con man.

What Will Happen Next?

The January 6th Committee is being led by a number of top notch former Assistant US Attorneys. They are putting together a tight case which they will first present to the American people and then send to the DOJ wrapped up with a bow on top. Their goal is to inform the public by telling the full story of Trump’s sedition along with his team of nutballs before 2022 so that we can vote with knowledge about who we are electing. After that it will be up to the DOJ to have the courage to do the right thing and indict Trump and his co-conspirators who have not cooperated or told the truth to us.

How the Dems Could Win In 2022 and Beyond

In the next elections the American people will have the choice of voting for the extremist Party of Trump or rejecting it if crazy Trump people win primaries.

Predictions are that the Dems will lose the House and possibly the Senate in 2022.

Maybe. But there could be a very different scenario thanks, in part, to Trump. If the pandemic recedes (which it is on track to do), the supply crisis ebbs (which is tied to the pandemic receding), the economy continues to boom (it’s going amazingly well), and inflation eases, the Dems can talk about kitchen table issues and tout their successes while Trump continues to obsess about the 2020 election ad nauseum (which he is doing- thank you so much!), the January 6th Committee can engage the attention of Americans (they are preparing the movie right now- stay tuned), and Americans get it that Trump would be our version of Hitler, the Dems could pull a magic win out of the hat.

This is especially true if Trump endorsed extremists win Republican primaries and the Dems offer more centrist candidates in the general election. The American majority is not crazy. It doesn’t like what happened on January 6th. It will reject extremism and seek the middle.