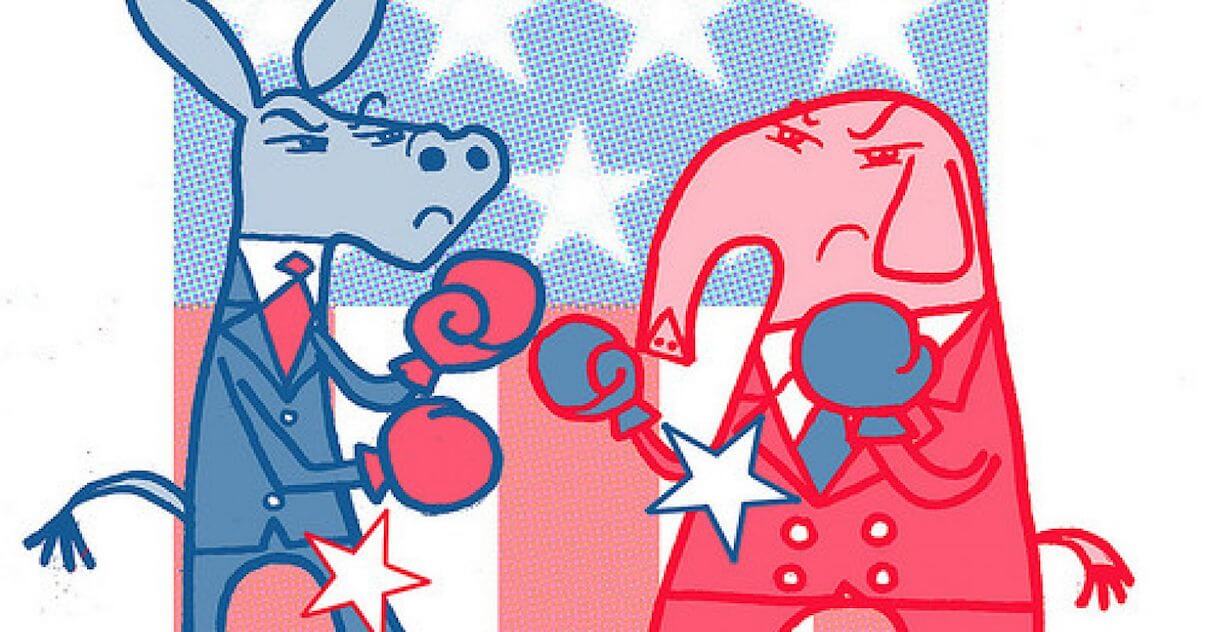 The MAGA Playbook: Cling to The Big Lie, Cheat to Win

The GOP has been invaded and taken over by extremists: the MAGA crowd. Some of them are just plain batshit crazy folk, conspiracy believers, QAnon supporters, adherents to the Big Lie and bullies. Others are too scared to speak up so they go along with the extremists to stay in power. This unhinged view of reality comes from living in a hermetically sealed conservative news bubble that pushes fearmongering to gain votes for Republicans. Because of the MAGA take over, the GOP approach to governing and to campaigning has turned ugly, partisan and mean because Republicans believe they have to prove up their bona fides with a highly motivated, angry, fearful, weaponized base.

Jim Jordan, Ron Johnson, Marjorie Taylor Greene, Lauren Boebert, Louie Gohmert, Paul Gosar, Elise Stephanik, and Trump himself know how to play this game. Ron DeSantis does too. He is polling well with the MAGAs in Florida, even beating Trump for the second year in straw polls taken at the two most recent conservative conventions ( 71 to 67 percent in the Western Convention), because he gives the base what it wants: culture war squabbles. De Santis called out Disney for its opposition to his Don’t Say Gay law and punished the Tampa Bay Rays at least in part for tweeting out their support for gun control laws. Refusal to play by the MAGA Playbook gets you death threats from the GOP base, Trump himself and others in this cult. You get hounded out of the GOP.

Adam Kinzinger and Liz Cheney have experienced this treatment- they have become pariahs in their own party.

Here’s Kinzinger’s take on his party:

“Madison Cawthorn can invoke coming bloodshed, and Paul Gosar can flirt with white nationalism,” he said, naming two of his more extremist colleagues, “and they’re signing a letter asking to have me kicked out of the caucus. This is how far the Republican Party has fallen. They call me a RINO”—a Republican in Name Only—“but I haven’t changed. The Republican Party has changed into an authoritarian Trump organization. They’re the RINOs. Trump is a RINO.” (Adam Kinzinger in the Atlantic)

To be a card carrying member of the MAGA GOP cult you should show you can and will fight dirty and cheat if that’s what you need to do to win. Dr. Oz, Trump’s pick to win the Republican primary in Pennsylvania, was running against David McCormick (R). The two of them were so close in the primary that a recount was in the offing. Trump told Oz to just say he won even though he hadn’t won. Just cheat, in other words. Trump was openly instructing Oz to play dirty. To his credit, Oz didn’t do that. Not yet. But if he wins he will be forced to play the game according to the MAGA GOP.

The GOP Culture of Cheating

The culture of cheating in this versions of the GOP comes straight from the top. Everyone knows that Trump cheats at golf, for example. He always has. He was notorious for that before becoming president. In 2019 Rick Reilly published the book, Commander in Cheat, which documents the lying, cheating ways of the Donald on the golf course.

“Trump doesn’t just cheat at golf,” Reilly notes. “He cheats like a three-card Monte dealer. He throws it, boots it, and moves it. He lies about his lies. He fudges and foozles and fluffs.”

“Donald Trump is the worst cheat ever and he doesn’t care who knows,” Rick Reilly says (in an interview) as he describes a man he has known for 30 years. “I always say golf is like bicycle shorts. It reveals a lot about a man. And golf reveals a lot of ugliness in this president.”

The GOP has taken on this characteristic of its nominal leader- not only a willingness to lie and cheat, but also to bully and there is no attempt to hide it or feel guilty about it.

The January 6th Committee is telling us in no uncertain terms that the The Big Lie is a massive con job, a flat out bold faced lie that has taken possession of the GOP. January 6th was Trump’s last stand to cheat to stay in power. With Trump as their leader, the GOP has become a cesspool of Trump mini-mes who revel in being mean and nasty and they wear it like a badge of honor. This has become a party that stands for nothing. No principles. No policies other than winning at any cost. It’s the party of NO and NOTHING.

Stuart Stevens, a Republican strategist, speaks and writes about what has happened to the GOP.

In his new book, It Was All a Lie: How the Republican Party Became Donald Trump, Stevens argues that the party’s support for Trump isn’t just a pragmatic choice. Instead, he says, it reflects the party’s complete abandonment of principles it long claimed to embrace, such as fiscal restraint, personal responsibility and family values.

So When the GOP Goes Low, Should the Dems Go High?

As Michelle Obama famously said, “When they go low, we go high”. That was a nice sentiment for a different era. At this point it sounds quaint. With the GOP definitely going low and lower how do you fight back? Do you really want to go high when your competitor in what’s supposed to be a fair race would do what he can to slit your throat, leave you bleeding in a ditch by the side of the road, and pretend to have won fairly, crossing the finish line to victory while you bleed out? Dirty players say politics is always a dirty game. But with stakes as high as they are today, Democrats need to be tougher competitors in this dirty game.

Dems don’t need to play dirty. But they need to think outside the old box.

The balance in the House and Senate is going to be crucial not only for Biden and the Dems, but also for our country’s future.

Much will depend on whether the Dems can keep a majority in the House and gain more members in the Senate in 2022.

These three concerns promise to agitate suburban women and drive Americans who want sane government, reproductive autonomy, and greater gun control to vote for Democrats. But the GOP has a lot of wind at their back. They will focus on immigrants invading at the border to replace the White Christian culture, fetal personhood at the moment of conception, expansion of gun rights for personal protection, inflation, and baby formula. MAGA Republicans are primed to fight dirty and might not concede if the vote is close enough to get away with saying they won whether or not they did in fact win.

With issues and enemies like this, Democrats better get better at being political combatants in a political world that is more like a civil war than a rules based playing field where either side offers good options. No. Most Republicans do not offer good options. They have become too extreme and they demand lockstep conformity from other Republicans.

What Does a Democrat Need to Do to Be a Good Political Combatant?

Americans are hungry for authentic, truth telling, say-it-like-it-is politicians who are strong, fearless, and determined as well as outraged about unfairness and empathic with all Americans. If central casting could pick out the best messenger to lead our party into the 21st century Volodymyr Zelenskyy would land the starring role. Given the utter ruthlessness of today’s GOP here are others who could be good messengers for a feistier Democratic Party: Jason Crow, Tim Ryan, Eric Swalwell, Stacey Abrams, Raphael Warnock, John Ossoff, Katie Porter, David Hogg and John Fetterman. These are the kinds of personalities we need to carry the Democratic message to America: strong, smart “prosecutors” and “fighters” who also have empathy, a sense of humor and are sane, moderate, capable problem solvers.

The Power of Laughter

Better political fighting includes using humor, which is one of the best weapons we have to fight disinformation, lying and cheating.  Call it out by making fun of it. Here is a recent appeal for money from John Fetterman:

In case you missed it: Dr. Oz is the official nominee of the Republican Party for U.S. Senate in his home state of  Pennsylvania!?

Accordingly, we created a little something inspired by classic 90s campaign bumper stickers to welcome Dr. Oz to the General Election.

Wouldn’t it be just simply delightful if we started seeing these plastered all over PA (and maybe even NJ)?

Here’s the deal, . Send John Fetterman a contribution of *any* amount right now, and we’ll send you back one of these stickers in the mail. Most folks are chipping in $6.

This gets the message across that Mehmet Oz has been a long term resident of New Jersey not Pennsylvania. If you want a Senator who understands the needs of Pennsylvania you will vote for John Fetterman. And send him money.

If the shoe were on the other foot and the Republicans were trying to diss Dr. Oz, they would have printed a bumper sticker questioning whether Oz was loyal to the United States because he has a foreign name and voted in the Turkish election last year. (Yes, he really did).

What Else Do the Dems Need to Do?

STOP BEING SO NICE. Call out Fox by NAME and the MAGA crowd BY NAME. Stop saying “that other channel” or “certain Republicans”. Get to the point and be frank and clear in their messaging. The GOP is the party of NO NOTHING, crazy extremists who assault the Capitol and want to hang the vice president. The GOP is the party of dictator wannabees, kooks, and nutballs. Say it!! Don’t sugar coat it. Then back up what you say with evidence.

And while we are at it, the Dems need their very own partisan giant entertainment news megaphone to counter Fox and conservative media. Relying on mainstream media or MSNBC to sell their message is a bad plan because MSM is always about the fight and what’s wrong instead of pushing out a positive message about what Biden and the Dems are doing right.

The World Has Changed

The Dems need to change with the changing times. We don’t need to be as craven and corrupt as the Republicans. There is no need to lie and cheat. We are the majority viewpoint! We just need to get out every voter possible everywhere possible.

What creates a Blue Wave? Strong messengers. Clear and convincing messages. Laughing at the opposition while calling them out. And grassroots relationship building to empower voters so that every voter understands his or her vote could in fact make the difference in 2022 and beyond.