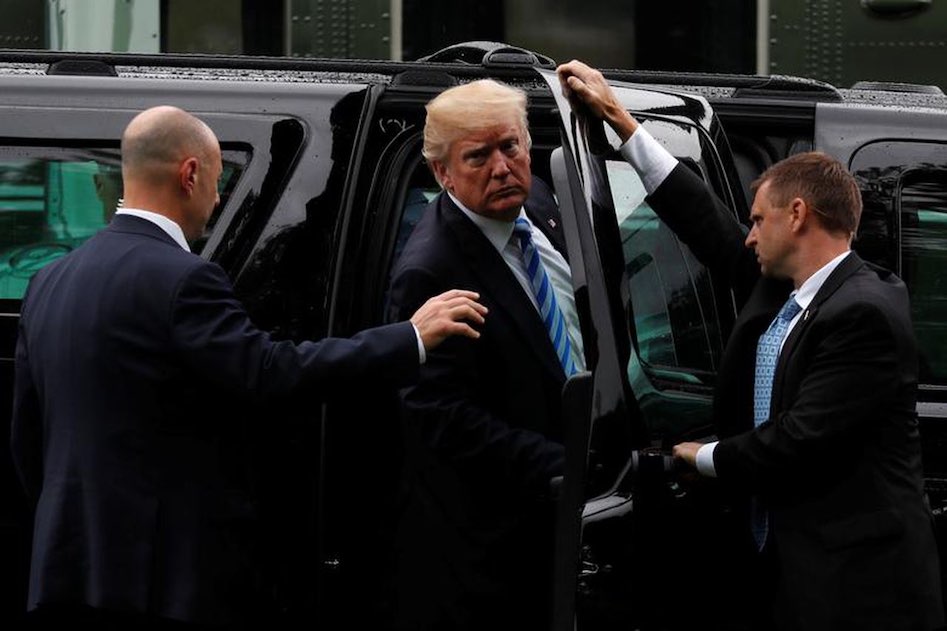 See Update below -Testimony from Cassidy Hutchinson on June 28, 2022.

The House select committee investigating the Jan. 6 Capitol riot held its fifth hearing Thursday where top Department of Justice officials testified about how they pushed back on former President Donald Trump’s efforts to overturn the 2020 election.

At the end of his time in office Donald Trump was on a desperate quest to stay in power. If that meant he subverted democracy so be it. Democracy was irrelevant to him as were laws and norms. He applied pressure at every level of government to overturn the results of a free and fair election that Biden won, but Trump claimed to have won.

The January 6th Committee has been effectively documenting and now exposing the massive number of ways Trump tried to do that: falsely declaring victory, never conceding, false ads on TV and social media, letters to state legislators, pressure campaigns on state legislatures and state legislators, secretaries of state, 61 baseless court cases, pressure on Republicans in the House and Senate, the RNC, constant claims of grievance and appeals for money from his supporters, intense pressure on Mike Pence to falsely claim slates of electors invalid and accept phony slates of loyalists from battleground states on January 6th and more.

As January 6th neared (Trump’s D Day–the last day possible to try to seize the election away before Biden was officially declared the winner), he tried to get the DOJ to help him sow doubt about the election. Trump had reportedly become more and more agitated. He wanted the DOJ to put it’s thumb on the scale despite the fact that the leadership at DOJ: Jeff Rosen, Rich Donoghue, and Steve Engel, the three DOJ witnesses at the fifth hearing, were telling Trump over and over again that he was wrong about the crazy ideas he had: there was no basis to believe that an Italian contractor was using a satellite to switch votes from Trump to Biden; he was wrong about DOJ having a basis to seize voting machines; wrong to say there was evidence of fraud when there wasn’t and on and on. Rosen called it “pure insanity”.

To appease Trump, DOJ did, however, chase down every single assertion. They found every one of them to be without merit. As soon as the lawyers pushed back on Trump against one conspiracy theory, another would pop up based on what Trump read on the dark alleys of the Internet and was being promoted by Team Crazy. Eventually Trump exposed his true state of mind to these officials:

Trump told DOJ officials ‘just say it was corrupt, and leave the rest up to me and the GOP congressmen’

This is important evidence of Trump’s state of mind. His intent is clear. Truth didn’t matter to Trump. Appearances mattered to him because he was trying to convince his supporters they should help him overturn the election despite a lack of supportive evidence of fraud.  Trump needed DOJ to say something to cast doubt on the election so he could continue to tout his false reality that the election was stolen. Trump and his supporters have been living in an alternate universe, a fact-free bubble perpetuated by Fox “news” and conservative media for years. As January 6th approached, Trump needed his supporters to be riled up for the final effort, the attack on the Capitol. Alternate reality is also what Putin subjects Russians to and other authoritarians use to stay in power. They lie to look good when they are corrupt and create protective media around the lies.

When Trump came up against the DOJ leadership, his false world ran smack dab up against the real world just as Rudy’s crazy lawsuits ran into the buzz saw of reality in American courts of law. When so called alternate facts come up against real facts and evidence the unreality bubble bursts.

Trump Wanted Everyone to Help Him Break the Law

What Trump was doing to try to overturn the election was both illegal and unconstitutional. Any lawyer practicing criminal law as a defense attorney or prosecutor would know that.

For Rosen, Engel and Donoghue to do Trump’s bidding would have brought them into the conspiracy in the role of co-conspirators and allies. People at DOJ make their living out of fighting corruption and prosecuting people who defy the law. They undoubtedly understood that they were being urged, pushed and cajoled to join the conspiracy to overthrow the election by their crooked boss, Donald Trump. Jeff Clark was willing to do Trump’s bidding. He was an environmental attorney, not a criminal lawyer. He had no business even thinking he was qualified to serve in the role of AG. As Donoghue said to Clark: “You’re an environmental lawyer. How about you go back to your office, and we’ll call you when there’s an oil spill.”

As a former Assistant US Attorney I am both proud that these guys stood firm, but not surprised that they did. I am certain that Trump gave up on his plan to replace Jeff Rosen with Jeff Clark as AG not because he was chastened, but because hundreds of additional attorneys would have resigned in DOJ leadership and in offices across the country in protest. The headline would have been that Trump was trying to coerce his Department of Justice to lie for him and they stood up to him. The cat would have been out of the bag. And these lawyers at DOJ made that clear to Trump.

The way this went down instead, Trump did try to coerce his Department of Justice and they stood up to him, but secretly. I fault not only these guys but almost all the other Republicans who are testifying now under oath to the Jan 6 Committee for failing to rise up together after Trump lost to tell the American people the truth about the election. They should have banded together and spoken out. Our country needed them to tell us all the truth: the election was fair, not stolen; Trump is lying to you. Yes, it is nice that they are doing it now under oath before the Committee, but where were they in Trump’s second impeachment trial in the House?

Republicans Knew They Were Breaking the Law

Trump might not care whether he was breaking the law, but those Republican allies of his in Congress understood it.

After the fact, many Republicans in the House asked for blanket pardons from Trump, hoping to get them before he left office.

Multiple Republican members of the House of Representatives sought preemptive pardons from Trump on the heels of the Jan. 6 Capitol riot, among them Reps. Matt Gaetz, Mo Brooks and Marjorie Taylor Greene, witnesses testified.

Alabama Rep. Brooks sent the White House an email on Jan. 11, 2021, seeking pardons for himself, Gaetz, and “every Congressman and Senator who voted to reject the electoral college submission of Arizona and Pennsylvania” five days earlier, according to excerpts of the message displayed during the hearing. (CNBC)

Other Republicans in the House who may have asked for pardons via Mark Meadows or White House counsel were: Scott Perry, Jim Jordan, and Andy Biggs, and Louis Gohmert.

As Adam Kinzinger pointed out during the fifth hearing, “The only reason I know to ask for a pardon is because you think you’ve committed a crime”.

Jeff Clark Is Going Down

As the committee was presenting its findings to the American people in the televised fifth hearing, news broke that Jeff Clark was outside  his home in his pajamas. He had been escorted from his house by FBI agents at the crack of dawn as the FBI likes to do when searching for evidence it thinks a suspect might try to destroy. There’s a reason Jeff Clark took the fifth 100 times before House investigators as part of the probe of the January 6th Committee.

Thursday’s January 6 committee hearing is focused on Clark’s plan that would see him installed as the nation’s top law enforcement official. Once in power, Clark, as acting attorney general, would then write letters to Georgia and other state officials telling them that the department had found evidence to support Trump’s baseless claims of voter fraud.

Clark was warned by my favorite lawyer in this whole sordid caper, Eric Hershmann, who was one of  Trump’s White House counsel. Here is Hershmann’s response when he heard about this plan from Clark:

“And when he finished discussing what he planned on doing, I said, ‘good, fucking, excuse me, f-ing, a-hole, congratulations you just admitted that your first step or act you would take as attorney general would be committing a felony and violating rule 6c,” Herschmann told the panel, per an excerpt of his previously private deposition that was released on Thursday.

“[Eastman] started to ask me about something dealing with Georgia and preserving something potentially for appeal, and I said to him ‘are you out of your f–king mind?,’ ” Herschmann told the panel.

“Eventually he said ‘orderly transition.’ I said ‘good John. Now I’m going to give you the best free legal advice you’re ever getting in your life: get a great f–king criminal defense lawyer, you’re going to need it.’ And then I hung up on him.”

The Department of Justice is going after many of these people we have learned about who were willing participants in Trump’s plot to overturn the 2020 election and subvert our democracy. There will be more public hearings in July because more evidence is coming out now that Republicans who knew and saw Trump’s illegal, unconstitutional efforts are emboldened to speak up. People are getting the message. They can either cooperate with the Committee or end up like Jeff Clark on the street in their pajamas at the crack of dawn as their homes are being searched. I can’t wait to see Jim Jordan, Mo Brooks, Louis Gohmert, Marjorie Taylor Greene, Scott Perry, Matt Goetz and Andy Biggs out on the street in their pajamas when the FBI conducts those searches!

Here is a brief summary:

What Cassidy Hutchinson just testified to exposes not only Trump but many of his deputies to criminal liability because they were accessories to what can only be described as a president trying to overthrow the government to stay in power, which is called a “self-coup”. The testimony also shows how crazy and unhinged Trump was. This testimony today exposes everyone around Trump who lacked the courage to tell the Committee the truth about what happened. These macho guys left it to a 25 year old woman to tell the truth about what really happened with Trump in the White House in the last days of his time in office. She did that despite threats.