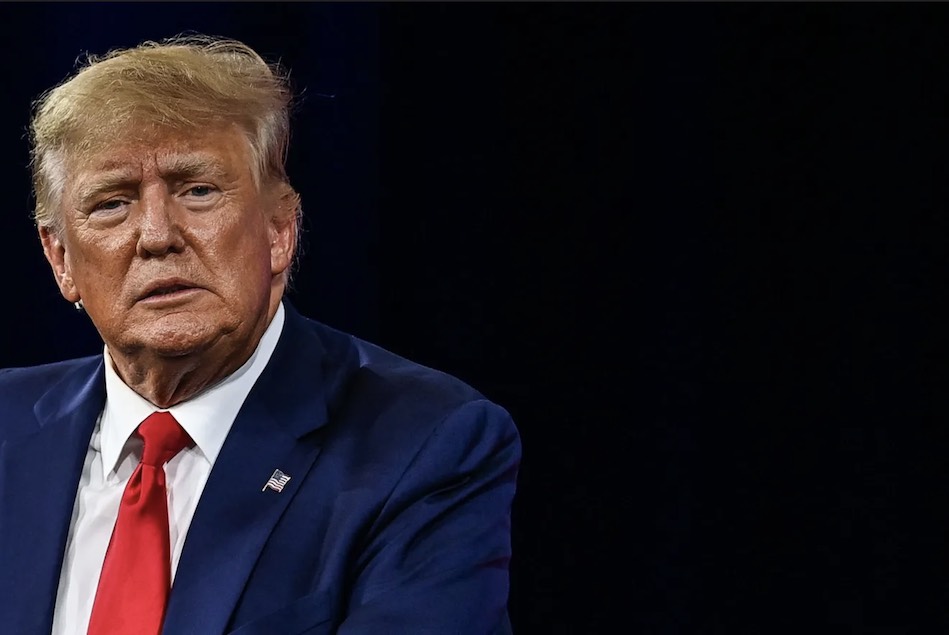 Trump is not the president anymore. Nonetheless, he dominates the news cycle with fall out from his current and past outspoken, defiant and crazy behaviors: hiding documents at Mar-a-Lago to prevent the National Archives from getting ahold of them; trying to wrangle more votes than he legitimately got out of Georgia in a desperate attempt to stay in power after losing the 2020 election; misrepresenting the value of his real estate assets which will eventually unravel Trump Org.

Trump may not be on the ballot in the midterms but his presence or taint (depending on your politics) is everywhere.

And that is good for the Democrats.

The reason it is good for Democrats is because even people like Karl Rove and Ben Shapiro, super conservative Republicans, are getting tired of Trump– his endless grievances, his predictable problems with the law, and his inability to accept reality. He is like Dennis the Menace- always getting into messes. Trump is synonymous with trouble.

Karl Rove: ‘Beyond me’ why Trump held on to docs ‘when he had no legal authority’

What Karl Rove said on Fox News is that Trump broke the law by holding onto all these documents. Plain and simple. “No legal authority” means he broke the law.  Rove is expressing what many other Republican lawmakers and other GOP leaders have been whispering behind closed doors- Trump is more trouble than he is worth. It would be better to find another presidential hopeful to push a right wing agenda.

That doesn’t mean Trump supporters are ready to part ways with him.

Before the Mar-a-Lago search, Republicans were looking for other mean spirited, divisive people, like Ron DeSantis, to step in and lead the GOP to victory in 2024. Trump’s power seemed to be fading.  In June, straw polls at Republican CPAC conventions had DeSantis beating Trump.

Denver poll indicates Trump is losing grip on Republican party as DeSantis wins 71% of the vote to Trump’s 67%. [The Guardian]

But then came the Mar-a-Lago so-called “raid”. Trump was able to pump his deluded, perpetually outraged supporters for more donations once again and enlist his followers in his own outrage at being investigated…again. Straw polls taken at the August Texas CPAC convention now show Trump far in the lead again .

Among the attendees who voted, 69% said they preferred Trump, with 24% saying they would prefer Florida Republican Gov. Ron DeSantis. [CNN]

HOW THE MAR-A-LAGO SEARCH WILL PLAY OUT

On Friday, August 26th, a heavily redacted affadavit in support of the search warrant permitting a search of Mar-a-Lago by the FBI was made public by Judge Reinhart. Despite the extensive redactions, the information that was revealed greatly increased our knowledge of Trump’s situation. It added valuable insights that help us understand how serious this matter is and how likely it is that Trump will be indicted because of his actions and his obstruction of a criminal investigation.

SI -This stands for “signals intelligence”. SIGINT is intelligence derived from electronic signals and systems used by foreign targets, such as communications systems, radars, and weapons systems that provides a vital window for our nation into foreign adversaries’ capabilities, actions, and intentions.

HCS- Stands for Human Intelligence Control System and refers to confidential informants (spies working for our country) whose lives could be at risk if this information gets into the wrong hands. These people help our country get inside information that keeps us and our allies safe. They risk death or imprisonment if they are found out.

ORCON- Originator Control. ORCON-USGOV – The ORCON-USGOV marking is placed on classified national security information to indicate that it may be disseminated to other Federal agencies but may not be disseminated outside of the executive branch without the prior approval of the originating agency.

NOFORN- Not for Release to Foreign Nationals.

Trump’s defenders have been whining that the search warrant issued by Judge Reinhart was much ado about nothing. But that’s not what we have here. The affadavit even in its highly redacted form exposes a far more dangerous story because it tells us that there were the highest of the high top secret documents at Mar-a-Lago that had no business being there and the National Archives really tried to get them back over and over–nicely at first, then using a subpoena and finally having to resort to a search warrant.

We also learned from the affadavit that many documents retrieved earlier by the National Archives, were in disarray- had been rifled through and taken out of their folders, mixed in with other sundry documents including some that had Trump’s distinctive writing on them. Some were found in his closet. Some he took with him on trips to foreign countries giving rise to more speculation that he may have been dirty dealing with our top secrets. Trump’s refusal to return documents and the fact that his attorney claimed all the top secret documents had been turned over when they had not, as well as video evidence that boxes had been moved in and out of a storage area at Mar-a-Lago, add to the mounting evidence of potential obstruction.

All of this has raised a red flag with our counterintelligence community including some Republicans. Some are deeply concerned that Trump really might have been selling our secrets to foreign adversaries although few will say that outright just yet. Lawmakers have asked the DNI for an assessment of the damage which means they are trying to find out the fall out from Trump’s mishandling of these documents. If we learn that our intelligence capabilities have been compromised by Trump’s actions or people have died because of him or Ukraine was compromised because Trump gave secrets to Putin or some other big consequence of Trump’s “mishandling” of documents, then I am certain Trump will be indicted. Merrick Garland will have no choice because failure to do so would mean anyone could defy these important laws that protect our country and face no consequences. Trump could face a 20 year sentence or more for these violations.

This is also a relatively straightforward case. It is understandable to the public unlike the two impeachment trials. Even Trump loving, Trump defending lawyer and Harvard professor Alan Dershowitz knows the peril Trump is in. He says the DOJ has sufficient evidence to indict Trump right now. Yep. They do. https://www.newsweek.com/affidavit-gives-doj-enough-indict-donald-trump-alan-dershowitz-says-1737467

The mystery of the day is why Trump did this. I think we know this man by now- how he rolls. I am willing to make some educated guesses about why he did this.

So, here are my theories about why Trump is hoarding the documents.

First, I think Trump was pawing through the top secret documents to try to find evidence to prove his pet conspiracy theories: Obama had been listening in on him; Hillary’s emails were retrieved and hidden from him; there really is a deep state out to get him. He wanted to find the origins of the Russia investigation into him that led to his first impeachment. He was probably looking for the mole he could attack for squealing on him.

Second, I think Trump wanted to hide his own clandestine, illegal activities while he was president. He wanted to find any evidence of his own wrongdoing in the files and flush it down the toilet. Literally. He knows what he did and most likely tried to hide it at the time he did it, but he fears he might have missed some evidence that didn’t get flushed down the toilet. It could come back to damage his image and his chance to be president again if it gets into the hands of the National Archives. In other words, he is trying to cover up the truth about who he is and what he did during his time as president.

Third, I think Trump could be making deals with spies and agents from other countries on behalf of autocrats and dictators who want our top secret information and will pay a lot to get it. Trump could be monetizing our intelligence information for his own enrichment.  He would do that and not think twice about it.

Which brings me back to Trump Fatigue Syndrome.  The man is a mess. He’s a disaster. He is exhausting. Everywhere he goes and everything he does creates wreckage.

He is like Pigpen from the Peanuts comic strip. Remember Pigpen? “Pigpen is a human soil bank who raises a cloud of dust on a perfectly clean street and passes out gum drops that are invariably black.”

The DNI has launched a damage assessment investigation to learn what the fall out was from Trump’s mishandling of our most sensitive national intelligence information. We are going to hear about that.

The January 6 Committee is interviewing cabinet members from his administration about how they considered using the 25th Amendment to remove him after the attack on the capitol because Trump was (and still is) crazy and dangerous. We are going to hear about that in the next public hearings in September.

The Georgia investigation is heating up and getting closer to indictments. We are going to hear about that.

The NY civil case is heating up, Alan Weisselburg will be testifying and even if he wants to protect Trump he will end up implicating him. We are going to hear about that.

The app hasn’t yet attracted any paying advertisers, the filing with the Securities and Exchange Commission shows. And its parent, Trump Media & Technology Group, is losing money and “expects to incur significant losses into the foreseeable future,” the filing said.

EFFECT ON THE MIDTERM ELECTION

Yes, Trump is exhausting. But he is also one of the biggest motivators both for voters who love him and those who hate him. Democrats are praying that Trump stays in the news as we get closer to the mid-terms. The biggest gift of all would be if Trump declared he is running for president again.

Trump and the loss of Roe are gigantic voter energizers. They remind voters about what they stand to lose with MAGA Republicans. Both Trump and Dobbs ignite outrage and fear in Democrats, Independents and sane Republicans. There is nothing as motivating as fear to get people to the polls to vote for Democrats. For Democrats, turn out is everything. The majority of general election voters do not want what the MAGA Republicans stand for. If turnout is high enough, the Dems might keep the House and add to the Senate.  Currently, primary races across the country are showing a 5 point swing in favor of Democrats. In battleground districts and states, that edge might help the Dems defy the odds.