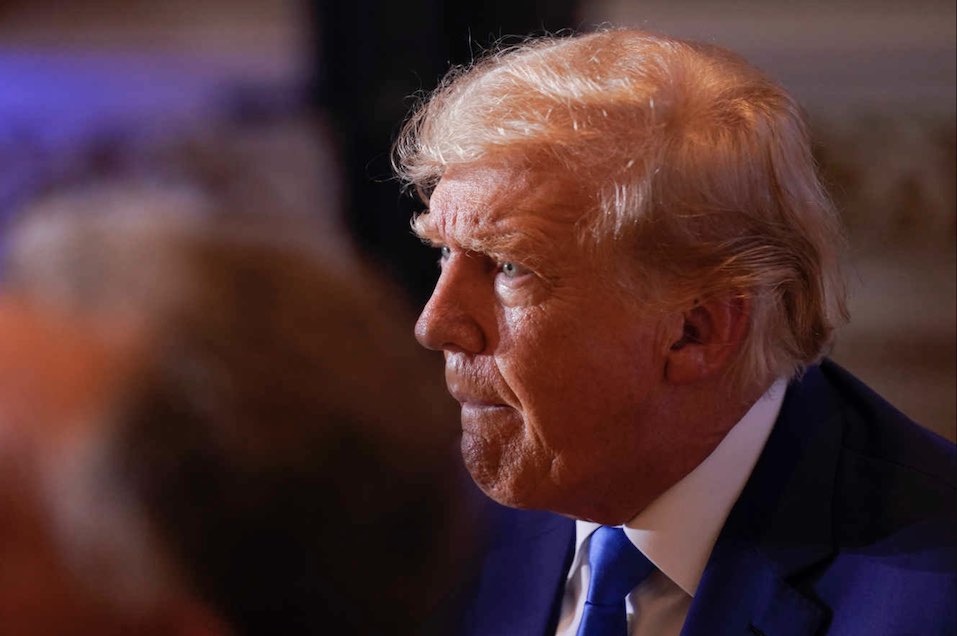 On Tuesday, November 15th 2022, an aggrieved and vengeful Donald Trump announced his third run for president. He spoke at Mar-a-Lago in front of a crowd of supporters and club members taking pictures of him on their cell phones.

But this time it is different.

This run for the presidency comes after a disastrous midterm election for Republicans where they expected a big red wave that didn’t happen thanks to Trump whether or not he accepts the blame. All of Trump’s election denialist picks running for governor and secretary of state lost their elections. The Republicans narrowly clawed their way to power in the House. But because there are too many powerful and self-aggrandizing extremists in the House “Freedom Caucus” such as Marjorie Taylor Greene, Jim Jordan, Louie Gohmert, Paul Gosar, and others, whoever is chosen as Speaker of the House will not have the ability to rein this faction in.

The result will be that for the next two years the House will likely be chaos and outrage will be the name of the game. We will have a continuation of rabid culture wars amplified by Trump. There will be attempts to impeach Biden and attacks on Dr. Fauci, investigations into Hunter Biden, possible attempts to limit funding for Ukraine, pass a national abortion ban, and make social security and Medicare renewable instead of a right for older Americans; which could result in the loss of the social safety net for the older white low-information people who form the core of the Republican voting bloc. We are in for a crazy and very ugly 3 ring circus in the House for the next two years.

The American majority is not going to like this. Republicans in the House could ruin what is left of the Republican brand that used to win general elections. But who has the guts to tamp this down?

THE GOP IS DAMAGING ITSELF BY STAYING WITH TRUMP

The take home lesson from the midterms that too few in the GOP seem to understand, is that the American people who vote in general elections and are the final say when it comes to electing Senators and Presidents are centrists and moderates who now reject Trump. Even if the base is still all in on Trump, he has become unelectable in a general election. His base is too small to elect him president anymore.

This midterm election reminded us that most Americans generally oppose extremist views, care about our democracy, want abortion rights as a personal freedom and gun control. They fear climate change more than a rising multicultural majority. They don’t like culture war divisiveness or the meanness of today’s Republican Party.

MAGA cult members who are all in on Trump no matter what, will vote in primaries for extremists but that sets up the Republican Party up for general election losses over and over again. This is especially true when it comes to the rising Gen Z generation. Republicans may already have lost Gen Z voters for decades to come. The Republican Party really needs to regroup and find more moderate Republicans to lead their party if they hope to appeal to a majority of Americans.

Trumpty Dumpty is in the process of a painful fall. He has lost Fox News and the New York Post. The Murdochs have turned on him. The New York Post buries the announcement of Trump’s third run at the bottom of the front page “Florida Man Makes Announcement, page 26.” It’s true that Fox and the Murdochs have been disenchanted with Trump before and then come around, but this time feels different.

Many conservatives who formerly backed him called his presidential announcement speech “low energy” and a number of people in the audience tried to leave the room as Trump rambled on and on with his boring old greatest hits but were prevented from leaving the room by security guards to avoid embarrassing Trump. Club for Growth has decided not to support Trump which is a huge loss for him. Prominent GOP donors have decided to move on. Stephen Schwarzman, Ken Griffin and others will be backing other candidates. The National Review‘s headline was a blunt “No,” Many Republicans who want to run for president themselves are saying it is time to move on because the GOP can’t win with Trump. What they SHOULD be saying is that Trump not only cannot win, he is a wannabe authoritarian who will destroy our democracy, ruin our standing around the world, and let Russia take over Ukraine.

The American people are on record rejecting Trumpian candidates across the country. They voted for sanity. They voted for an end to divisiveness. And they voted to preserve our democracy. A majority of Americans do not want Trump to be president again right now and it is about to get worse.

Trump’s return also comes at a time when three key criminal investigations are ripening. Trump has three targets on his back: the January 6th Insurrection, the Mar-a-Lago Top Secret documents case and the Election influence case in Georgia where the grand jury is interviewing some of the last witnesses it needs to hear from before issuing indictments. There is general speculation that Trump announced his run for president now because he knows these indictments are coming for him. His goal is to claim he is being persecuted by the Democrats and the libs because he is running for president. That is a PR strategy but it will not stop the indictments on three strong cases that could land Trump in prison.

Merrick Garland announced the appointment of a special counsel to make the decision about indicting Trump on two matters: the Mar-a-Lago top secret documents case and the January 6th insurrection case. Some people who remember what happened with Mueller are disappointed. But Garland did the right thing. Once Trump announced his run for the presidency Garland, who was appointed by Biden, was immediately in a conflicted situation. He needed to find an independent prosecutor to move the cases forward and either indict or not based on the evidence. By now the investigation teams know if there is enough to not only prosecute but likely have sufficient evidence beyond a reasonable doubt.

Given the swiftness of the appointment of Jack Smith, Garland must have already anticipated the need to appoint a special counsel and already done his search for the right person. The appointment of a special counsel will not cause much delay in a determination to indict or not because the two teams that are working the cases will fill Smith in on their findings so far and continue to do the last of their investigative work. Smith will have a lot of reading and talking to do to catch up but there will be little delay. The delay will come from the defense trying to keep Trump out of prison hoping he will regain the presidency and the OLC get out of jail free card once again. The DOJ is well aware that it is working against the clock because of this. An indictment would need to come relatively quickly to avoid a trial too close to the presidential election.

Even if Trump runs and wins re-election (which could happen even if Trump is unelectable because the Supreme Court is likely in Harper v Moore to grant state houses the vast power to make up their own rules about the slate of electors a state sends to the Electoral College – essentially institutionalizing the John Eastman election subversion plot that would let red states submit a slate of electors that represents the will of the state legislature and ignores the will of the voters). Trump might end up the winner in the Electoral College in that way. But Trump could nonetheless be disqualified from taking office.

Citizens for Responsibility and Ethics in Washington has vowed to pursue disqualification for Trump to hold office under the Fourteenth Amendment for his part in the January 6th insurrection.

In a letter sent to the former president, CREW President Noah Bookbinder outlined how Section 3 of the Fourteenth Amendment bars anyone who engaged in insurrection against the Constitution they swore to defend from holding office, and let Trump know that CREW is prepared to take action. Nearly four years to the day after swearing an oath to the Constitution, Trump incited an insurrection that culminated in a violent attack on Congress.

“The evidence that Trump engaged in insurrection is overwhelming,” Bookbinder said. “We are ready, willing and able to take action to make sure the Constitution is upheld and Trump is prevented from holding office.”

In September, a New Mexico judge ordered Otero County Commissioner Couy Griffin be removed from office, following a lawsuit brought by CREW and others, ruling that the attack on the Capitol was an insurrection and that Griffin’s participation in it disqualified him under Section 3 of the 14th Amendment. That decision marked the first time since 1869 that a court has disqualified a public official under Section 3, and the first time that any court has ruled the events of January 6, 2021 an insurrection.

Here are excerpts from the CREW letter to Trump:

Section 3 of the Fourteenth Amendment provides that no individual who engages in insurrection or rebellion against the Constitution—after having previously taken an oath to support it—shall hold any federal or state office (unless Congress, by a vote of two-thirds in each house, removes such disability). Per Article VI, Clause 2, these and other provisions of the Constitution are “the supreme Law of the Land;” all federal and state officials are bound by them.

CREW believes you are barred from holding office under Section 3 of the Fourteenth
Amendment because you engaged in insurrection against the Constitution you swore to
defend. On January 20, 2017, you stood on the West Front of the United States Capitol, placed your left hand on the Bible, and swore a sacred oath to “preserve, protect and defend the Constitution of the United States.” On January 6, 2021, an insurrection that you incited culminated in a violent attack on the same hallowed grounds, where Congress was meeting to certify the Electoral College results of the 2020 presidential election pursuant to the Twelfth Amendment and the Electoral Count Act, 3 U.S.C. § 15.

By summoning a violent mob to disrupt the transition of presidential power mandated by the Constitution after having sworn to defend the same, you made yourself ineligible to hold public office again. The evidence that you engaged in insurrection as contemplated by the Fourteenth Amendment–including by mobilizing, inciting, and aiding those who attacked the Capitol–is overwhelming.

THE RISK TO TRUMP AND THE REPUBLICAN PARTY