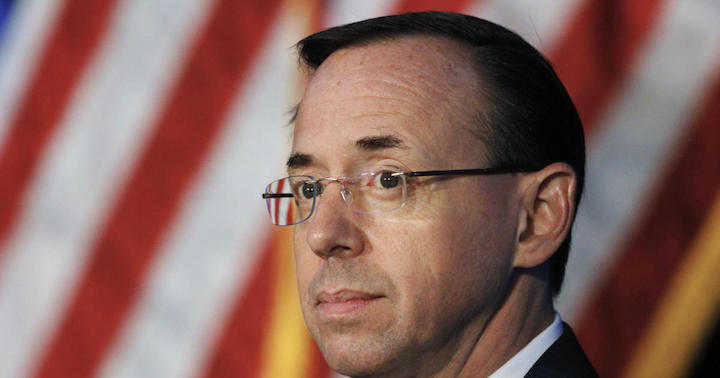 When the history books are written about what happened in this country during Trump’s corrupt presidency, Rod Rosenstein will be hailed as one of the heros. It started out looking like he might bend to Trump’s will when he wrote the underlying memo that was used as the pretense for firing Comey. But after that he grew a spine and has handled himself admirably as Asst Attorney General overseeing the Mueller investigation, re-approving the FISA warrant, approving the referral of matters outside the scope of the Mueller investigation to the US Attorney in the Southern District of NY.

Trump, the RNC, and many Republicans are ginning up false reasons to fire Rosenstein in the near future. As Norm Eisen and Richard Painter point out in their op-ed in USA Today, all of the reasons being floated are flat out lies or misapplication of existing law (as with the law governing recusal as it applies to Rosenstein).

There is only one reason Trump wants Rosenstein gone and it is obvious to everyone: he is desperately trying to stop the Mueller investigation. This is obstruction of justice. Plain and simple. There is no basis for what Trump appears to be about to do.

If Trump pulls the brake on this train, get ready to jump into action. We the People need to stand up to Trump and his coven of bad actors. We have to support all of the Democrats and, yes, a few Republican lawmakers, who are trying for a Hail Mary pass, namely, legislation to protect the Mueller probe. They are trying to tee that up next week. We need to make calls to support them and put pressure on lawmakers who are not supporting that crucial legislation.

Rosenstein is telling his close friends he is ready to be fired and can live with himself because he has done what is right ethically. Rosenstein has upheld the law. What makes our country a true Democracy is that no man is above the law. That includes you, Donald Trump.