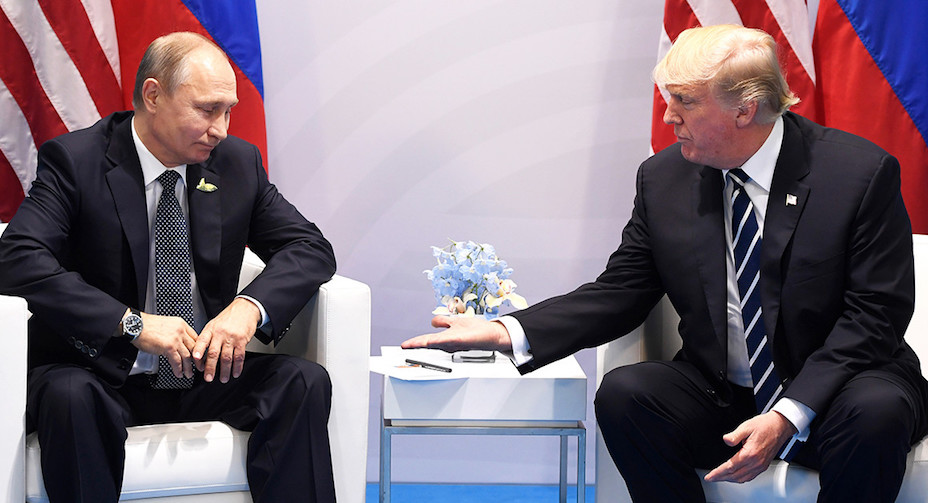 Trump stripped John Brennan of his security clearance for reasons that have nothing to do with protecting the security of our country and now he says he is going to use his unilateral presidential power to yank the security clearances of more people on his enemies list.  All of the people he is threatening either played or are playing some role in the Russia investigation.  Off with their heads.

Trump is taking on the intelligence community and seems to think he will win this game of chicken.  He says Bruce Ohr will be his next victim.  Who is Bruce Ohr?  He is the guy whose sin was that he knew Christopher Steele personally, the former British intelligence agent, who was paid to investigate Trump and his connections with the Russians. Ohr was the person relaying information to our intelligence community about the dossier.  Trump and his Republican allies are up in arms about this dossier.  They are so upset about that dossier it makes you even more convinced the dossier will be found to be truthful in every assertion  in there including the pee pee tape part.  Trump is convinced that the Steele dossier was the inception of the Russia investigation even though it wasn’t (it was George Papadopoulos’ conversation with an Australian that was reported to the FBI).  Trump thinks the dossier led to Mueller and that it is therefore to blame for all of his unhappiness in life.  Hence, his rage at Bruce Ohr.

Defrocking Bruce Ohr, if he gets away with it, is more dangerous than you might think.  First, Ohr could lose his job.  He currently works at a government job that requires that he be able to view secret documents that require security clearance.  In addition, this may be Trump’s trial balloon to see if he can get away with doing this to Ohr.  If he can, his next move might be to remove the clearances for Mueller and his team.

What is absolutely clear is that Trump is yanking security clearances for the feel-good moment of sweet revenge against his so-called enemies.  This is about Trump’s need to lash out and has nothing whatsoever to do with protecting our country.   What he is doing is making our country more vulnerable to attack by foreign enemies and less secure.  Why? Because if we lose the collective knowledge of these intelligence officers, we are losing important information and relationships that keep us safer as a nation.  Trump is not on the side of America.  Trump is only out for himself.  That oath of office he took to protect the American people was never something he ever took seriously.  Trump, very simply, is a traitor to our country. As John Brennan said about Trump in Helsinki, his behavior is nothing short of treasonous.

Former CIA directors and deputies have put together a letter calling out Trump for his actions.   There are currently 60 former intelligence officers who have signed this letter and there may be more signatures coming.  Their key point is this:

“[It], is our firm belief that the country will be weakened if there is a political litmus test applied before seasoned experts are allowed to share their views.”

They are right.  He is stifling free speech.  But Trump’s actions go beyond stifling free speech.  He is breaking the law.  He is once again committing obstruction of justice in plain view just as he did with Lester Holt in that famously naïve or thoughtlessly frank interview he did with Holt, saying that the motive behind firing Comey was to get the monkey off his back, “Russia” was on his mind.

He showed his hand this time with his statements to the Wall Street Journal saying that the reason he is yanking these security clearances is because of the Russia probe.  Just as with the Lester Holt interview, Trump is committing a crime in public and with total impunity.

He is also tampering with witnesses and trying to influence people who might become witnesses.  He is trying to silence them and threaten them to keep them from coming forward.

Just because Trump commits obstruction of justice and witness tampering in public and in plain view, rather than in secret or behind closed doors, does not mean he is not committing these crimes.

Unlike some other criminals, Trump does not worry about breaking the law.  He is used to breaking the law and  breaking norms without fear of paying the price because in the past, he has never had to pay for his actions in any significant way.  He has learned that if he makes a statement that is outrageous, and contrary to the norms or to the law, he can win the day simply by asserting his position over and over again, loud and proud, and never giving an inch.  Trump has learned that he can count on a lot of other people in public life to play by the rules while he does not but pretends he does.

There is more than one way to stop Trump, but guess who knows one of the ways?  Omarosa.  That’s who.

I believe Trump is in panic mode right now not only because of the Mueller investigation but also because of Omarosa and her 200 or more damaging tapes of real conversations in the White House that expose what is going on in that den of corruption and paranoia.  We can tell Trump is panicking because of the number of tweets he blurts out about Omarosa and the Mueller investigation.  Both Muller and Omarosa terrorize Trump because both are going to reveal the factual truth to the American people in their own way.  When it comes to Omarosa, she not only “gets” him and his evil game, she knows how to get TO him and play that game better than he does.  Omarosa is showing us one way to take Trump down.  She is driving him crazy on purpose.  She is playing with his thin-skinned self.  She is torturing him.

What beats Trump is the truth.  Even if we do not believe a word Omarosa says because she is a proven liar, we can trust her taped conversations, her video content, and her e-mails.  Stay tuned.  She is going to twist the knife of Truth into Trump.

Facts destroy fantasy.  That’s why we are all waiting and wishing and hoping for the Mueller trials to get us what we are dying to know- what did Trump know and when did he know it?  We need the Truth.

Truth is like Round Up Weed-killer with this president- spray it on lies and lies die.

More people need to stand up to Trump and speak truth to power- spray on some more Round Up.  It isn’t enough that Michael Avenatti, Omarosa and 60 former intel chiefs are taking on this grifter.  Where are the rest of our political leaders?  Especially Republicans who have the power to do something meaningful to push back against Trump?  Why have they gone underground?  What are they doing hiding out like guys who need witness protection instead of protecting us?

And don’t tell me these spineless Republicans need to placate Trump until we get through with the 2018 elections.  If they can’t speak up now, they don’t deserve to win anything.  They took an oath of office to protect the American people.  They are not doing their jobs.  As Trump continues his rampage, yanking the security clearances of our trusted, most knowledgeable intelligence leaders, we need everyone to stand up to him.  Everyone.

We could use  a few former presidents speaking out right about now.  Where are they?  We need other military leaders and corporate leaders and celebrities to speak out.   How about a few well placed whistle-blowers who are willing to challenge their NDAs and speak out about what they have seen and heard?

Just because Trump is shooting down the people who are investigating him one by one instead of Saturday Night Massacre style as Nixon did, does not make him any less guilty of obstruction of justice and witness tampering. Will he eventually try to destroy the Mueller investigation by yanking the security clearances of Mueller and members of his investigation team?  That may be where we are heading.

Just because Trump has a unilateral power to do something does not mean Congress is helpless to prevent him from doing it.  Congress can act to stop him to prevent further harm, and they should.  Trump’s motive is corrupt.  Everyone knows it.

It’s time to yank Trump’s security clearance.  He never would have gotten it if he hadn’t worked with the Russians to steal the election and become president.  Trump is the one who gave away top secret information to the Russians in the Oval Office after he was elected, remember that moment complete with the photo of Trump yucking it up with the Russians while our country’s and Israeli’s secrets were being disclosed?  Who knows what Trump confided to Putin in secret when they met in Helsinki?

Where is Homeland Security when you need it?  Trump is the biggest threat we have right now to our country’s current and future safety.