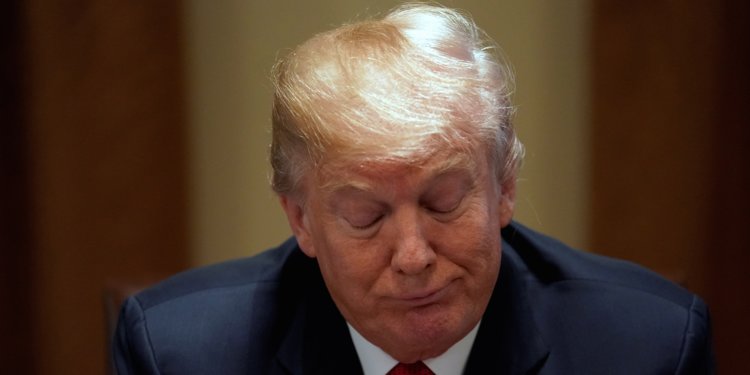 The midterms are messing with Trump’s mind.  And Mueller is too, but first, let’s talk about the midterms.  Many people were shocked that when Trump was in France, he could not get it together to be at the Armistice Day ceremony with all the other world leaders because it was a rainy day.  After that he showed up late to an event attended by all the other heads of state after Macron called him out as a lousy rotten nationalist in front of the entire world.  He spent much of his time alone and isolated, shunned by other world leaders except for Putin.  Once he got back to the U.S., he could not bring himself to leave his safe space to place a wreath at the tomb of the unknown soldier in Arlington Cemetery to commemorate Veteran’s Day as former presidents have done.  There are reports that he is bitter and angry, lashing out at people around him in the White House.  He is also lashing out at journalists with heightened vindictiveness, taking away Jim Acosta’s press pass which resulted in a lawsuit brought by CNN against him and his aides.  His dark mood is even darker than it has been in the past.

What’s going on with him?

Trump is obsessing about the midterm results.  The extensive GOP losses are on his mind.  Although he is looking for someone to blame, he knows that this loss is a powerful repudiation of HIM.  This rejection of him is so shocking to him (after all he is a malignant narcissist who lives in a cocoon in which he is the most wonderful thing on earth) he is finding it hard to maintain even the pretense of being a functioning head of state. He is isolating himself.  He is probably depressed. It started on the trip to France and it is continuing now that he is back.

Trump predicted a red wave not a blue one.  He said that with great certainty.  He also said HE was on the ballot and because of that the Republicans would win.  He got people like Martha Mc Sally in Arizona to act like a Trump mini-me and she lost.  Georgia should have been an easy win, but that deep red state is going to have a run off with Stacey Abrams against Brian Kemp.  Even if she loses, she got amazingly close.  Key Midwest states that took a chance on him in 2016 (Michigan, Wisconsin, Minnesota, Pennsylvania) have turned blue.  Many state legislatures turned deep blue.  The Dems flipped over 300 state legislative seats.  Andy Kim was just declared a winner in New Jersey taking another seat from a fervid Trump loving Republican incumbent, Tom MacArthur.  The blue wave seems to keep on rolling.  Sweet. The total tally in the House is now 36 flipped seats for the Dems with the potential for closer to 40 seats for the Dems when all is said and done.

Trump can pretend the midterms were a GOP success, and force VP Pence to say that, but they weren’t.

Trump has no one left in the White House to rein him in these days or tell him the truth.  Even John Kelly might be leaving soon, not that he is trying to rein Trump in anymore.   Trump has nothing but yes men left.  We are experiencing Trump Unleashed.  The real Trump.  He is Mr. Know it All.  He knew for sure what would work to win the midterms for the GOP.

Instead, he got smacked upside the head by a big blue wave.

I think Trump realizes that this is a tipping point from which he will only fall further.  It’s downhill from here because the fight to rein him in is coming on many fronts including Congress, the courts, Mueller, and the world at large as never before.   I believe this knowledge is immobilizing him.

Trump has an uncanny sense of the way the collective unconscious works.  He is great at creating narratives that resonate with masses of people.  For example, he ginned up fear about that caravan coming to kill you that many of his cult followers actually believed.  He creates excitement at his rallies about shared hatred of the “other”.  He creates and understands narratives and branding.  He has been said to be figuring out nasty pejorative nicknames for the new leaders in the House of Representatives. That’s apparently how he is spending his so-called executive time, obsessing about the nasty names he can tweet out when the Dems take charge of the House.

The narrative that he created to get himself elected was that he is a brilliant infallible mastermind. He convinced his followers that he and he alone could protect them.   His followers voted for him believing in that powerful authoritarian persona.  They had watched him for many years on The Apprentice acting like he knew all about business and saying, “You’re fired!” with authority.  They hired him to be their bad ass, taking their side against the world.

Many in the political world also thought Trump must be a genius because he instinctively knew what so many other pundits, commentators and politicians missed, namely that there are millions of insecure people and racists in America who are fearful and could be easily led by an authoritarian leader.  Not sure how they missed that, but they did.  Trump got credit for being a natural political genius, a wizard, a magician to have figured this out and win the presidency against all odds.

That view of Trump’s innate instinctual magical power has been effectively shattered as the midterm results have been coming in and continue to come in and the blue wave grows in size and impact.

Along with that spreading blue wave, the narrative of Trump’s ability to know more than everyone else, to predict better and to win better than anyone else has been exposed as a false narrative.  It is simply wrong. He is not infallible.

The Emperor really has no clothes after all.  The Wizard of Oz is actually a little balding man behind the curtain that Toto pulled back for all the world to see.

A new Monmouth University poll tells us that only 3 out of 10 Americans want to see Trump win a second term.  That’s 92% of Democrats and 58% of Independents and 16% of Republicans who don’t want him back.

If and when his followers realize how vulnerable he is, will they continue to put their faith in him?

Or will they start to peel away?

There is new information about how Americans are going to be paying more in taxes rather than less this April, thanks to the Republican tax bill that was supposed to pay for itself.  Will that be the last straw for Trump loving low information voters?

Trump senses his vulnerability now and he is running scared.  His lying has reached epic proportions which correlates with his sense of fear and need to recreate reality in an image he wants to believe.

More is coming.   There is Mueller’s probe as well as a number of other law suits in the SDNY.  It takes time to put together a law suit, but the real world is poised to push back on him for acting like a dictator and breaking the law.  He is going to be schooled in the ways of a democracy.

The DC District court is going to instruct him that he cannot take away a journalist’s credentials because he does not like his questions.

Federal courts are going to insist Republicans follow the rules with their various state elections and recounts and will insist that all votes get counted despite Trump’s desperate tweets to the contrary.

I think (hope) a Maryland court is going to tell him his temporary AG, Matt Whitaker, needs to be Senate confirmed and that his appointment of Whitaker was illegitimate and unconstitutional.

In Congress, Adam Schiff, who will lead the House Intel Committee, has sternly warned Whitaker that everyone is watching him like a hawk.  If he lifts his little finger to damage the Mueller investigation, if he tries to tell Trump confidential information, he will face charges and could lose his law license and go to jail. ( I think Whitaker is not listening to Adam Schiff and is being a snitch, telling Trump the inner secrets of the investigation because one of Trump’s most recent tweets reflects that he now has information about what is going on inside that investigation.  That is illegal and Matt, you are playing with fire.)

Starting in January Trump will face push back on many fronts.  It has been reported that Mueller has sealed indictments already approved, ready and waiting.  They may come sooner than January.  The people who stand to be indicted are close to Trump.  Very close.  And Mueller’s report is said to be ready as well.

There is a big dark cloud over Trump that is growing larger by the day.

This is why Trump is becoming nonfunctional even as a pretend Head of State.  Will he get his mojo back?  What do you think?

Trump told his followers they should only like winners.