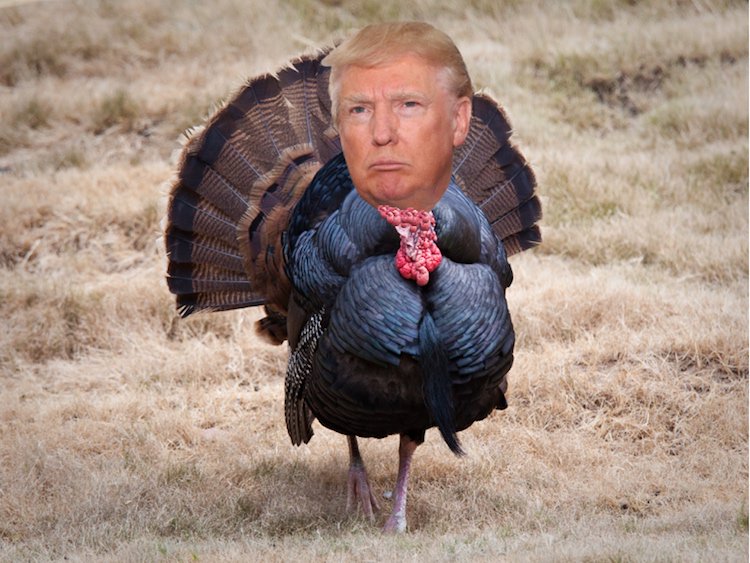 It’s Thanksgiving weekend and Trump just said what he is thankful for is, wait for it….he’s thankful for HIMSELF!  Are you surprised?  He says he is just what America needs.  He sure is.  He is the gift that keeps on giving.  He has ignited the forces that are going to take him down.

For those of us who cannot stand this president, this administration and the Republican enablers who support him, I believe there is good news coming and something to be thankful for two years into the worst administration in the history of this country.  This game is about to change.  And when it does, Trump is gonna hate it.  He lashes out whenever anyone challenges him.  He is going to be challenged.  He will become even more disgusting and despicable, sealing his fate for multiple indictments once he leaves office if he cannot be impeached before then.

Trump has no minders anymore, so he says whatever he friggin’ wants.  The world, all of us, are seeing a more and more unhinged, vicious, amoral person, a narcissist, a sociopath and a would-be autocrat.  Even a portion of his base is turning against him. (More on that in a minute.)

Here are the four big reasons Trump is getting closer to his downfall:

Even if some judges do have biases, all good federal judges pride themselves on being fair and deciding cases based on the law and precedent, not on their political leanings.  What Trump just said was deeply offensive to most self-respecting judges.  The ultimate irony is that Trump appointees including Kavanaugh and Gorsuch, are likely to bend over backwards after this to avoid looking political and favoring Trump in any way to prove they are NOT political hacks.

The Supreme Court may have that opportunity relatively soon if it is called on to weigh in on whether Trump must respond to a grand jury subpoena.  The law is clear that he must if you follow precedent.  Presidents are not above the law.  I think Trump just increased the likelihood that Kavanaugh, Gorsuch and all the other Trump appointed federal judges will do what they can to avoid the appearance of being political hacks by relying more heavily on precedent so that they will not be seen as stooges for Trump.

This midterm, Americans clearly rose up against Trump by the millions demanding a check and balance.  He was rejected for being craven, amoral, and an embarrassment.  Women in the suburbs became an army of foot soldiers canvassing, emailing, calling, and writing post cards to voters in swing districts to remind them to vote.  Americans came out in historic numbers rivaling a presidential election.  Dems won the popular vote by the largest margin since Watergate.  Millennials rose up and voted.  Hispanics showed up and 60% voted for Democrats.  Over 100 new groups were formed to GOTV, help new candidates, and educate the electorate; they functioned as part of a progressive army to win back the House along with the DNC, DCCC and other Democratic groups.  New donors and new donor groups like Act Blue stepped up to provide support for candidates across the country.  It was  effective.  This movement is not going away!!  If anything, it will get stronger as Trump goes further off the deep end.

Perhaps most important of all was that Trump lost market share with his base of low education working class white men and women in states that voted for him in 2016.  Many are angry about his trade war tariffs and the tax bill that is hurting them in their pocketbooks.  Their lives are not better.  A portion of his base has lost their faith in him.  Not all of them, but if enough of them leave his side, Trump is in trouble because his loyal base is too small as it is.

Working people are not fools, and Mr. Trump promised them a Republican president who would never cut Social Security, Medicare, or Medicaid; who would repeal Obamacare but provide “insurance for everybody”; who would get rid of bad trade deals and “drain the swamp,” as he never tired of saying. Instead, had Mr. Trump’s effort to replace Obamacare passed, it would have imposed vast cuts in retirement programs and driven up health insurance costs. His tax reforms were heavily weighted to large corporations and the top 1 percent. So it is no surprise that more than half of white working class men now believe that Mr. Trump is “self-dealing” and corrupt.  (from Stanley Greenberg’s op-ed in the New York Times.) https://www.nytimes.com/2018/11/17/opinion/sunday/trump-is-beginning-to-lose-his-grip.html

Just wait until Mueller’s indictments start coming and the Grand Jury report reveals what Trump did to win in 2016.  Even more of his former voters are going to peel away.   Trump’s idiotic trade wars are also disrupting the stock market, along with other factors including the astronomical debt we are carrying and the softness of the FAANG stocks.  (Those are the tech stocks: Facebook etc.)

If Trump were a normal person, he might see the handwriting on the wall and quickly try to pivot; try to be inclusive and a unifier not a divider, try to be nicer to people like Admiral McRaven instead of insulting him, or read the information his staff gives him so that he doesn’t say so many stupid things.  But we know better by now.  Trump is incapable of change.  He will continue to fail and fail badly.

What Trump is doing is knowingly misusing the executive branch in an attempt to improperly influence an investigation into himself which is obstruction of justice.

I expect that to be one of the counts in his impeachment.

The truth will come out and it is going to be fatally damaging not only for Trump but his incredibly arrogant family.  His daughter, Ivanka, has been caught using Jared’s private server for government emails.  Really?  Really?  What could she have been thinking except that the rules don’t apply to her.  Lock HER up!

When the truth comes out about Trump, what will happen to the GOP?

The truth about Trump is going to destroy the GOP unless they distance themselves from him.  If GOP lawmakers do not reject him, their chances for re-election will be severely damaged because as Trump gets more and more unhinged and more and more factual evidence gets into the public square, a larger and larger portion of the American electorate will not tolerate this president or his enablers.

I think Republicans in the Senate facing re-election will discover that they need to slip away from Trump as the truth piles up.  Those Senators who face tough re-election fights in states that turned blue or are purple will be first to fade away from him since their highest goal in life is to be re-elected.

The midterm election was a clear rebuke of Trump and a demand by the American electorate for oversight, restraint and consequences for this president.  Trump’s behavior is going to get worse and worse as the truth comes out because that is how Trump deals with opposition.  In the end Trump will be blocked and tackled by many forces rising up against him: Congress, the courts, the free press, the military, Mueller and the FBI, corporate America, pro bono lawyers working to reunite families that were separated at the border, Attorneys General across the country and by the American people.  Our country is and will be punching back.

We still have a robust democracy in spite of Trump and really because of Trump and for that we can be grateful to him for being a great big disgusting turkey this Thanksgiving.