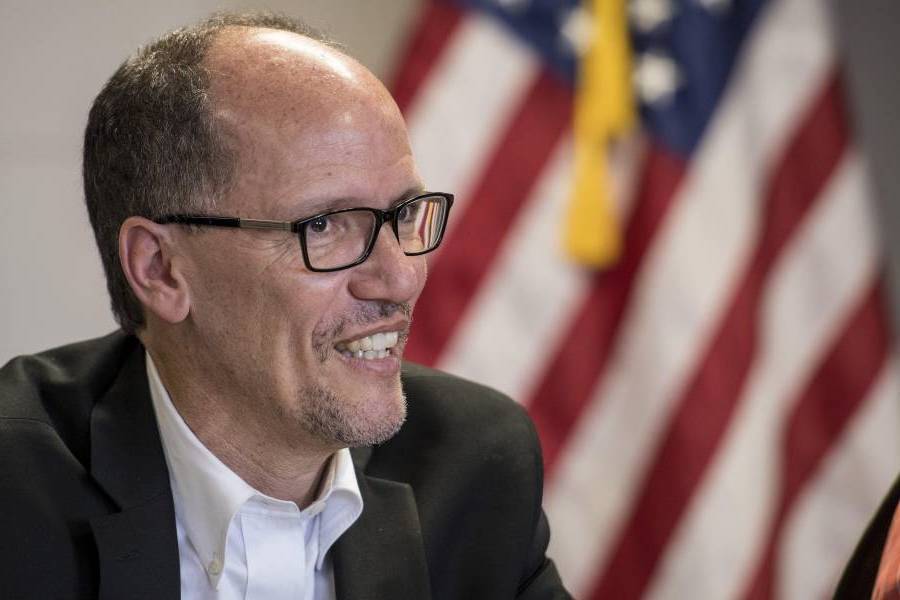 Many people think that the DNC is being run the same old way today.  It is not.  There is a new DNC.  And it is working smart and gearing up for a 2020 win.

The DNC is being led by Tom Perez. He wants to be sure that whoever becomes the Democratic nominee for president will have the tools to win.

Tom Perez was in Chicago for a breakfast with Democratic activists and organizers.  We gathered in a large meeting room at the invitation of one of the larger law firms in Chicago to hear the playbook for 2020.  I think you will be interested to learn that the DNC has made significant changes to their strategies and goals as we move into the presidential campaign season.

Tom Perez gave us his report.

1) There will be no smoke filled back rooms where the powerful decide who will be the nominee.  Let the best man or woman win.

2) There have been significant changes to their approach to acquiring, and managing data and data sharing.  The system has been modernized and the analytics tools are cutting edge.  The cyber security effort is being led by Bob Lord, who has been the chief digital officer at IBM.

3) There is an extensive program for real time data exchange across many platforms, modernized infrastructure and analytics.  Voters in every district will be a known entity this time.  Millions of cell phone numbers have been identified so that voters who do not have land lines are accessible.  The DNC will be purchasing much more data.

5) Strategically there could be a number of potential paths to get an Electoral College win.  The most straightforward way right now seems to be the one that Obama used to forge his victories- through Pennsylvania, Michigan and Wisconsin.  Many voters who live in the Midwest, voted for Obama twice and decided to give Trump a chance, are now expressing disillusionment with Trump since his tariffs have damaged small farmers and small businesses, the tax cut helped big companies and the 1% but not the little guy, and this administration has been trying to strangle or kill off Obamacare since Trump was elected.

6) The Dems made their case effectively around kitchen table issues in 2018 and won back the House with a resounding victory.  They plan to do that again.  Key swing state voters need to have on the ground outreach and the Dems are going to provide it to help voters understand their choices with a focus on kitchen table issues.

7) The approach will be an “every zip code” 50-state strategy- showing up in every state but in varying degrees.  There will be 7 key battleground states where organizers- mostly young people and people of color, will be trained and deployed.  The name of this initiative is Organizing Corps 2020.  I will be writing more about this effort because I see it as one of the best ways to leverage our dollars to support whoever becomes the Democratic nominee.  Most of us care less about who it is.   Most of us are all in on whoever it may be.

8) Trump is a fear-mongerer.  In 2018 Trump tried to drum up fear about the border situation.  That created a backlash for many people outside of his cult base who are horrified about his family separation policy which is still continuing, and treatment of children being held in cages, denied toothbrushes, blankets, baths and the chance to be reunited with their family members.  Tom Perez tells us that we can assume the fear tactics will continue this time but the emphasis may change this time around.  This time Trump and the Republicans are planning to reframe the debate doubling down on “socialism” and how afraid Americans should be about turning into a socialistic country like…wait for it… Venezuela.

Socialism has always been a convenient boogeyman for conservative Republicans in recent American politics.  They like to brand programs that help Americans with difficulties like a debilitating illness, as “entitlements”.   Social Security, Medicare and Medicaid are helpful programs and Americans adore these programs and somehow do not realize we are already a partially socialist country and that that is a good thing.   Some of the most well run countries with the happiest inhabitants are the socialist Scandanavian countries.  But they do pay higher taxes and rely on government programs.

Republicans will try to terrify Americans about higher taxes and government programs.  They will point to Alexandria Ocasio Cortez as the harbinger of doom.

9) Tom also told the group about a number of innovative programs that have been working in tandem with the DNC, including Team Blue, Swing Left, Sister District and other activist groups that were so effective in 2018. There is a lot of synergistic energy with many of the grassroots groups working with the DNC for the same goal- ridding our country of Trump and Trumpism.

Here is a little of what Perez said.  I am paraphrasing him:

“This is the most dangerous moment in our history.  This moment in our history will be studied alongside the movement that brought us the unconscionable internment of Japanese Americans during World War II, the No Nothing Era, and the McCarthy era.  What all those eras have in common is that they came to an end.  They came to an end for one simple reason.  And it was what Barack Obama said…  that the most important word of a democracy is that simple two letter word “we”.  We the people.  It was the collective power of “we” that brought us the suffragette movement, that corrected the original sin of slavery.  It was the collective power of “we” that said we are a rich nation of immigrants and we will always be great because of our rich immigrant history.  We the people pushed back against Joe McCarthy and the Japanese internment camps.  These viruses can only be cured if We the People are standing up.”

I hope you will pledge to stand up and do whatever you can to make America America again as the election gets closer.