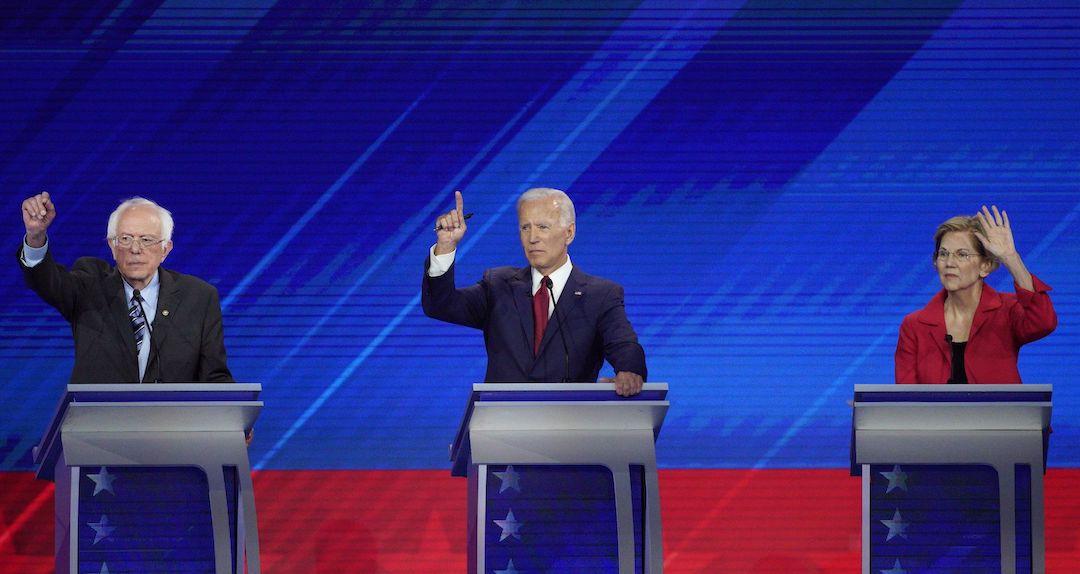 The Dems have a field of terrific candidates.  And unlike the first debate, the ten candidates in this Houston debate realized that the person who deserved to be praised is Barack Obama, who enjoys a 95% approval rating from Democrats, and the person who deserves to be attacked is Trump, the worst dumpster fire of a president in the history of our country.  Following the leads of Buttigieg, Klobuchar and Harris, the candidates also generally realized that they need to recognize their similarities rather than shoot each other in a circular firing squad.  The one guy who did not get the memo was Julian Castro, who went full attack dog after Joe Biden by claiming Biden got something wrong and calling out his ability to recall what he (Biden) had just said, when it was Castro who got something wrong about what Biden had said.  Unfortunately, Castro shot himself in the foot by attacking Biden.

As the candidates were talking I asked myself these questions:

1) Who would I trust to help Americans have better lives?

2) Who would I trust to handle a real emergency like incoming missile attacks from North Korea or a cyber attack intended to cripple our country?

3) Who would be a good steward of our democracy?

4) Who would choose good people to install in cabinet positions?

5) Who would listen to his or her advisors and be able to make good, well reasoned decisions that would be good for the country?

6) And who would not be corrupt?

All of these candidates would do a good job as president.  They are all thoughtful, bright, deeply caring, have the right temperament and are  on the side of the American people, not the corporate world and the 1%. What we are seeing is a difference in how moderate or not, fiery or not they are.  I would put Biden, Klobuchar, Buttigieg and Harris, in the moderate, more restrained category that would likely appeal most to the centrists in the electorate in places like the Midwest battleground states.  Warren, Sanders. Castro and O’Rourke represent the more aspirational, fiery left wing side of the party that appeals to the ready-for-quicker-change younger generation, more representative of the East and West Coasts.  The good news is that all of these candidates would be far better for America than the alternative- 4 more years of the worst president in the history of our country.

The debate over health care took up a lot of time and caused the most argument during the debate.  But the energy behind this policy debate is one that comes from the same urgent concern- how to help ALL Americans get health care coverage.  Sanders and Warren are really trying to get rid of the insurance industry.  To do that I think they are promising a one size fits all health care system that probably won’t fit all, in point of fact.  I do think, unlike what Bernie Sanders and Elizabeth Warren says, some Americans like their coverage and if you try to annihilate the entire system instead of modifying it you will find yourself in a knock down drag out fight and that was a fight that deeply damaged Hillary Clinton, and Barack Obama.  That fight could also take years to win and it might not be won.  Americans need better health care right now.  I have to admit that when Biden talks about simply expanding Obamacare and adding a public option I feel a sense of relief.  That would be less of a fight compared to trying to throw out the entire insurance industry.  But, above all, when we contrast the Dems with the Trump administration which is trying as hard as possible to get rid of the ACA and take away insurance from millions of Americans, there is no contest.  None.  Anyone who cares about health care needs to vote for the Democratic nominee whoever that may be.

In many ways, simply by being on the debate stage and by being themselves, they stood out in stark contrast to Trump.  Booker, Biden, Buttegieg and Klobuchar and others revealed deeply personal information about themselves.  By telling their personal stories, they established that they are empathetic and caring in contrast to Trump who is mean spirited and lacks the capacity for empathy.  They all stood out as better stewards of our democracy and the needs of the American people compared to Trump.  Trump is pursuing not an American first policy but a Trump first policy, a self-enrichment policy, abusing the office of president to enrich himself and his family.  That needs to end.  I trusted all of the candidates on that debate stage NOT to do that.

The key issues facing America today are health care, climate change, and gun control.  On these issues, the Democrats are on the right side of history.  The Republican Party has aligned itself with Trump- do or die, and they will have to apologize and defend Trump’s trade war, his big tax break for the rich and consequent trillion dollar deficit that will haunt generations to come, his massively corrupt administration, his xenophobia, his mysogyny, rolling back emission standards and clean water and air standards, and his barbarian, inhumane policies at the southern border. That is a lot to have to defend.

Who won the debate in Houston?  The American people did, provided they elect as president whoever the Democratic nominee will be.