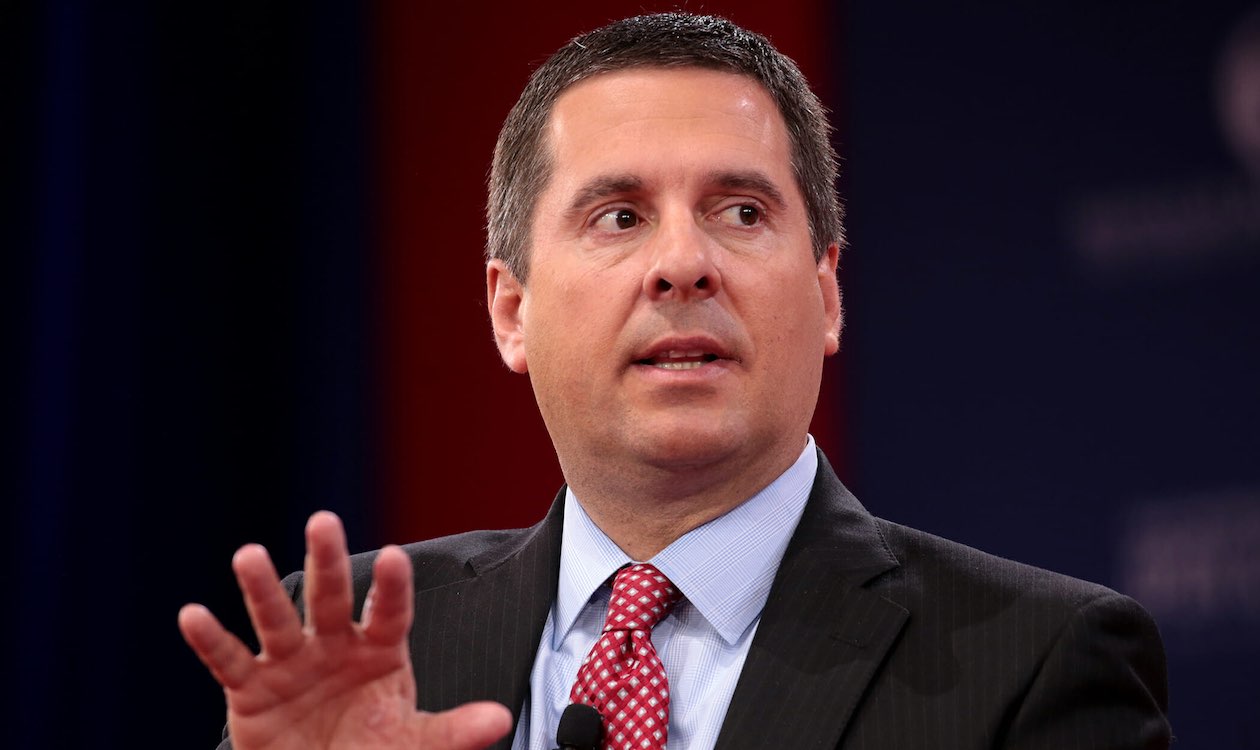 Fiona Hill, coalminer’s daughter with a lot of grit, came from England to the United States and rose over the years to become the leading expert on Russia and Putin. She began her testimony before Congress on Thursday with a powerful rebuke.  She told the GOP to stop amplifying and repeating the “fictional narrative” perpetrated by Russian intelligence and Putin about Ukraine being the state actor that attacked our election in 2016.  Here is the fictional narrative: Somewhere out there in Ukraine there is an oligarch with a server that will prove Russia was not the state actor that interfered in our election in 2016, but Ukraine did it instead, working alongside Hillary Clinton and other Democrats to hack the DNC and make it look like Russia did it so Trump would look like he was an impostor. In the most charitable terms, Putin seems to have brainwashed Trump into believing this myth which has driven Trump’s obsessive quest to get the president of Ukraine, Zelensky, to help him find this nonexistent server so he can feel better.

Let’s just stop right here.  This is really cuckoo for Cocopuffs.  It would mean that Hillary Clinton worked with Ukrainians to hack her own account and the account of the DNC and then somehow duped all 17 intelligence agencies (the best in the world) into ignoring what they uncovered factually in their investigations (that Russia did it), and get them all to agree to doctor evidence and push out a false narrative to help the Democrats.  CrowdStrike is code for this false narrative.  And what is really nuts is that there is no such thing as a physical server being secreted away because the data was in the “cloud”.  This is a crazy alternate universe that Trump and Fox, the GOP, and others have signed onto to help Trump feel better.

We also learned yesterday that our intelligence services sat all the Senators down and told them all that this myth being pushed by the Trump administration about Ukraine is definitely Russian disinformation. These Senators will be sitting in judgement of Trump at the impeachment trial.  They now know in no uncertain terms that Trump and Devin Nunes and others are regurgitating Russian disinformation.  Our intell agencies also need to have a very stern talk with Devin Nunes and other GOP know nothings in the House.  In the Mueller Report there is detailed documentation about the underlying digital trail left by the Russians in their hack of the DNC.  These investigators in our intell services are apolitical and follow the evidence wherever it leads them.  I have worked with them.  They are apolitical.  They KNOW the Russians did it and they KNOW it was to help Trump get elected. But even if Hillary had been elected, the Russians would have used social media to cast doubt on HER presidency too.  They are equal opportunity disrupters with the goal of damaging our democracy whoever the president may be.

Having listened to Trump’s rant on Fox and Friends yesterday, I think we are seeing a paranoid, obsessive, man whose mind is devolving into a morass, a puddle of confusion and desperation, marked by an inability to even discern the truth anymore if he ever had that capacity.  That rant on Fox and Friends was noteable for 18 lies but more than that, it was an expose of a man expressing intense desperation, demanding to be heard, not interrupted, desperate to be believed, obsessive, repeating what he needs to believe to feel ok.  Trump obsessively clings to his version of truth because that mythological version makes him feel better about himself.  He cannot, will not, believe otherwise.

Putin has been meeting with Trump and talking with Trump by phone and in person one-on-one since his election.  We do not know what Putin says to Trump because we have learned that Trump hides the notes in that encrypted server or the translator is sworn to secrecy and her notes ripped up.  What we do know is that Putin is a masterful KGB officer, adept at mind games.  Trump has become both his pawn and his mouthpiece.

Devin Nunes, Republican ranking member of the House Intell Committee, has been leading the GOP chorus in its refrain repeating over and over again those very talking points that Putin and Trump want to push.  Russian disinformation.  It was surreal to hear Fiona Hill call out the GOP about Russian fictional narratives and then immediately hear Devin Nunes go right back to the fictional narrative as if he hadn’t heard a word Hill had uttered.  It’s as if there is a wall between members of the GOP and facts, reality and truth at this point.  They simply cannot and will not hear it.  They have bought into Putin’s narrative to stay on the right side of a delusional man, our president, who is the most powerful man in the world and who also wields great power over them by force of tweeting at them, ridiculing them and the potential for banishing them from their tribe, the GOP, as Justin Amash was banished.

Remaining cabinet members and people around Trump who know truth from fiction have been enlisted to placate a delusional president by caving into his obsessive desires.  As Sondland said, these are the cards that are being dealt, this is the playing field.  You either play or get off the field. But this is also how we got to impeachment.  People like Pompeo, Mulvaney, and others understand that Trump cannot be talked down from the ledge when it comes to his belief in Russian disinformation.  But these crazy ideas lead to actions that endanger our national security as Trump withholds millions to force Ukraine to do his bizarre  biddings- chase after the Bidens and chase after a nonexistent server while Russia is emboldened.

A president who is this delusional must be limited by his advisors because of the danger he poses to our national security. Blame lies with Trump’s handlers and those GOP sycophants like Devin Nunes who are coddling and giving into Trump assuming they know better.  Blame lies with John Bolton for failing to come in to testify and pull back the curtain, tell the American people the truth about what is going on in the White House and how Trump’s tragically bizarre alternate universe has been forced on everyone who wants to keep his job.  Bolton has no business holding out for millions for his “tell all” book he keeps teasing us about unless he comes in and tells us all about Trump and this dysfunctional administration that he has been witnessing.  It’s  his patriotic duty.  He would be listened to.  He has not been brainwashed by Russian disinformation.  He is also not afraid of being tweeted at by Trump.  He is the single most important person we need to hear from to get at the truth.  He may not be coming in to testify because he is also implicated.  If so, work it out with the House Dems and get your immunity plan figured out.  Immunity from prosecution would be a fair price in exchange for the unvarnished truth about this dysfunctional administration.

Perhaps Bolton will testify in the Senate trial.  There is some speculation about that being his game plan.  That would be a reality show episode every American would watch.  The Senate trial will feature Chief Justice John Roberts as the judge.  Like all judges, he will have the ability to rule on motions and subpoenas at the time of the trial and since he is the Chief Judge, it is less likely that his rulings will be subject to appeal to the Supreme Court.  If a witness is subpoenaed, Roberts can order compliance.  If documents are subpoenaed, Roberts can order compliance.  Perhaps the House Dems anticipate that is how it will play out.  Hard to know.

In another important development, our courts continue to uphold factual evidence, truth and the rule of law by forcing the release of State Dept documents.  Friday night the State Dept released documents in response to a FOIA request for the very same documents the House has subpoenaed from the State Department that had been stonewalled by Pompeo and Trump.  About 100 pages have been  released so far by the State Department to the ethics watchdog group, American Oversight.  They were immediately made available online.  These documents are just the beginning of the flow of document information to us that the House could not get but the courts are forcing out into the open via FOIA.  The people who are getting us the truth are line workers at the State Department who are complying with the court orders as they have always done and will continue to do.  These line workers are following the rule of law even as Trump and Pompeo try to keep the lid on the truth and defy the law.  We have already learned from these emails now made pubic that Rudy Guiliani, Pompeo, and an aide to Trump were in communication with each other coordinating  the smear campaign against Ambassador Marie Yavonivitch.

Some Americans are turning off their TV sets.  If you are on Team Trump you are sick and tired of hearing your guy demeaned and you think it is unfair.  You have decided not to be swayed by the factual evidence or you think Trump should be voted out of office not expelled from office.  If you are on Team Dem you might be feeling hopeless.  You already knew that Trump did what came out in the two weeks of testimony in the House. But no matter how bad things get with this president, no one and nothing will stop him.

Don’t be demoralized.  Stay strong. If Ukraine can have a Revolution of Dignity, and Hong Kong can keep fighting for democracy, we can do it too.  The impeachment hearings brought us clear and convincing evidence.

With the Senate in denial about the danger Trump creates for our country, the real moment of truth will come next year with the election of 2020.  It is then that we will see whether the efforts of Marie Yovanovich, Lt Colo Vindman, Fiona Hill and others who risked so much to bring us the truth will result in another blue tsunami.