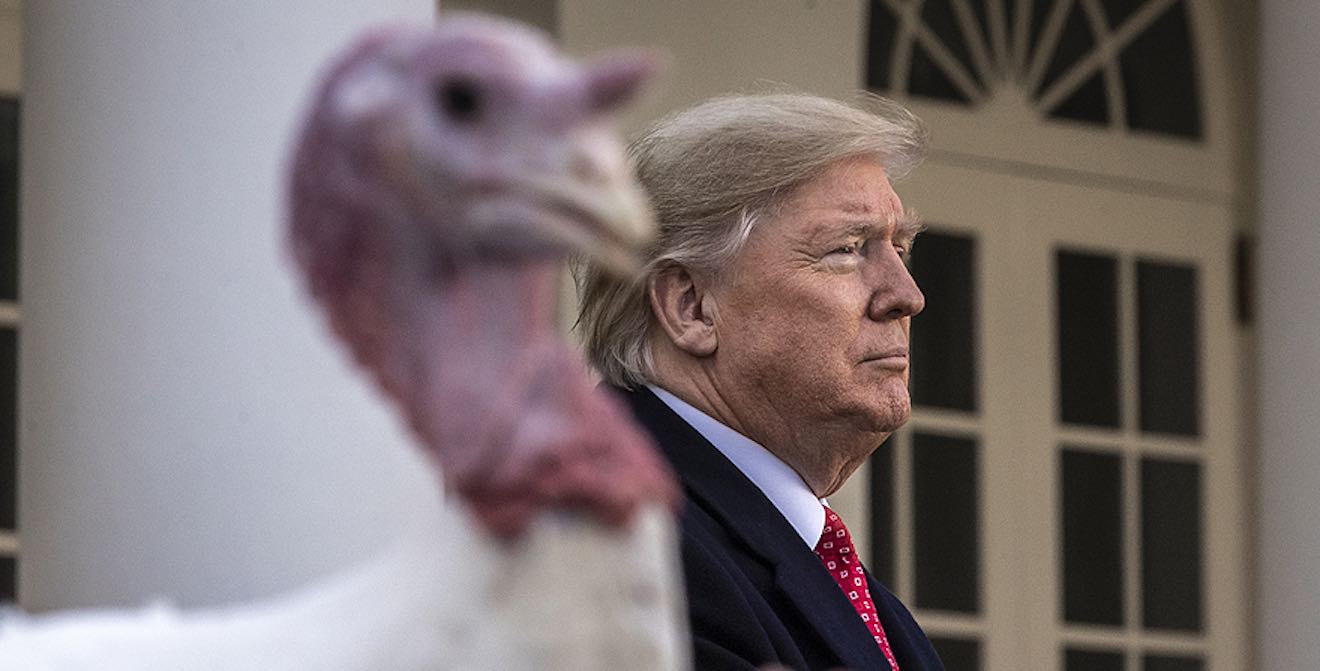 It’s Thanksgiving and a lot of people are feeling thankful that our country is going to have an election in just under one year so that, given all that Trump is doing to damage our democracy and divide our country, we can vote that turkey out of office next November.  Democracy and the rule of law are under siege from a president who would be king.  Trump is, however, facing headwinds that are likely to make him a one term president.  After leaving office he will face countless criminal and civil lawsuits  that will dog him for the rest of his life.  Some will be thankful for that.  But there is even more some people can be thankful for.

Articles of impeachment are coming. The House Intell committee did a masterful job of presenting the evidence.  I am thankful to them for all their hard work and how quickly they have developed the case.  The report is almost ready to go to House Judiciary where the articles of impeachment will be drawn up.  Everyone knows Trump abused his power, committed an attempted bribery and extortion of Ukraine, usurped the money earmarked by Congress and used it as his own leveraging tool to coerce Ukraine to do his bidding.  All of that was established even without supportive documents (blocked by the White House) and first hand witnesses who had even more in-the-room knowledge of the president’s wrongdoing (Bolton, Mulvaney, Pompeo, White House and State Dept aides and others).  Trump is good at obstructing justice and he needs to be because he has so much to hide.  Even if Republican senators do not vote to convict Trump, the evidence about what Trump did will have come out by the next election so that Americans can judge this matter for themselves.  Every single Republican Senator will be forced to go on the record with their vote and history will mark them as traitors if they fail to stand up for our country against Russian aggression and a lawless, corrupt president.

Emails and documents from this first traunch show that Pompeo, a Trump aide and Guiliani were all working together at Trump’s direction on the smear campaign of Amb Yovanovitch.   Let that sink in.  Pompeo was in with Trump and Guiliani on the smear campaign of his own stellar ambassador who was getting removed because she was an anti-corruption champion who stood in the way of the corrupt plot that Guiliani and Trump wanted to carry out.  Pompeo should resign.  Looks like he’s thinking about eyeing a return to Kansas to run for the Senate.  He should lose in that purple state which would be a fitting end to his career.

Additionally there are documents coming from the State Dept to other House committees as public servants (“the deep state”) respond to subpoena requests (in violation of Trump’s orders). This evidence is going to House committees not directly involved in the impeachment but will be shared with the key House committees pursuing impeachment.  I am thankful for the willingness of government workers to continue to follow the law in defiance of Trump.

Next, we can all be thankful that Rudy Guiliani is rapidly going down.  His role in Ukraine is on the verge of being more fully exposed by Lev Parnas, the guy Guiliani and Trump palled around with, who has connections with the Russian mob and gave money to Trump’s super PAC.  Lev has reportedly turned over audios, videos and photos to the House Intell committee.  This evidence allegedly documents some of Guiliani’s sleazy doings in Ukraine.

In addition, the SDNY grand jury has subpoenaed documents from Guiliani’s consulting firm.  Rudy Guiliani’s consulting business has been subpoenaed by SDNY.  The long list of potential crimes being investigated includes: money laundering, wire fraud, mail fraud, obstruction of justice, false statements, failing to register as a foreign agent and more.  Guiliani may well be indicted by the same office that he used to lead.  Whatever happened to America’s mayor?  Oh, nevermind, he got cozy with Donald Trump.   Notice how Trump has suddenly distanced himself from Guiliani? If Guiliani goes down the question will become this: will he turn on Trump and tell all to avoid prison himself or limit his sentence?  I think we are going to find that out.  Wow.  Even more to be thankful for.

Next, Judge Jackson issued an opinion that ends Trump’s claim that he is above the law.  The 120 page opinion makes it crystal clear that there is no such thing as absolute immunity as the Trump administration has been arguing.

Here is some of what Judge Jackson writes:  “[T]his Court holds that individuals who have been subpoenaed for testimony by an authorized committee of Congress must appear for testimony in response to that subpoena—i.e., they cannot ignore or defy congressional compulsory process, by order of the President or otherwise.” “Presidents are not kings…They do not have subjects, bound by loyalty or blood, whose destiny they are entitled to control.”

Jackson’s opinion means that witnesses, like Don McGahn, who are subpoenaed by Congress must appear before the House to testify.  In the course of testifying there can be assertions of executive privilege which can be adjudicated.  Judge Jackson included a telling line from Animal Farm in a footnote pointing out that the idea that all animals are equal but some are more equal than others is what Trump is arguing and it is rejected in this court opinion.  The ruling also establishes that Mc Ghan’s failure to testify “without legal justification” is itself an illegal act, an act of contempt of Congress.

This opinion will be appealed by the DOJ, but given the strength of the opinion and its reliance on established precedent, the matter is likely to be decided more quickly because the appellate court will probably let the opinion stand.  If so, we could get that expedited ruling in as soon as a week to 10 days.  The Supreme Court will probably not want to weigh in on something this obvious and basic that will expose it to the current political upheaval.  They will likely let the lower court opinion by Judge Jackson stand.

Trump keeps breaking the law.  Over and over again what we are witnessing is Trump issuing orders that break norms and the law including even military law (with the Gallagher Navy Seals intervention) and that require everyone in the cabinet and on staff to rush around to clean up after him in aisle five.  In the process some of these sycophants expose themselves to indictments for breaking the rules and the law to help Trump.  Maybe Trump cannot be indicted but everyone else sure as heck can be.  And for that we can be thankful.

Conviction and removal of Trump would actually be the best solution for Republicans, not Democrats.  There are about 30 Republican Senators who despise Trump and his vise-like grip over the GOP.  They would be thrilled to get rid of him.  They say that behind closed doors.  If the GOP could dump Trump before 2020 they could have a nominee like Nikki Haley who could take the wind out of the sails of the anti-Trump sentiment harbored by a growing number of suburban Republicans, especially women, who are appalled by Trump and would vote for a real turkey before they would ever vote for Trump.

It will help Democrats far more if Trump is running for president in 2020.  Running against Trump ON HIS RECORD is a winning strategy.  The tax cut for the rich, the trillion dollar debt, his efforts to kill our health care, his trade war that is destroying manufacturing and small farms (100 have gone bankrupt), no infrastructure plan,  immigration policies  that violate international law and are mean and cruel on purpose, climate change denial as ice caps melt and weather events turn into monster storms that wreak havoc around the world and damage homes and crops.

I am deeply thankful that Trump has been such a terrible president and so divisive that he has energized and agitated people across the country to elect Democrats in formerly red states and districts.  There is fury at this president for embracing white supremacy and attacking groups of people who didn’t do anything to deserve it, his corruption and his violation of the law have already agitated and engaged many who understand the danger of Trump for another 4 years of mayhem. These agitated voters will crawl over hot coals to vote against this man. Doug Jones was a hint.  2018 blue tsunami flipping the House was the canary in the coal mine.  Virginia was more proof.  The governorship in Louisiana was more.  Purple states are turning blue thanks to Trump.

So this Thanksgiving we can all be thankful for courts that are still upholding FOIA requests and the Constitution, three co-equal branches of government and insisting we have a president, not a king.

We can be thankful that Trump and his administration will continue their corrupt ways which will create a  groundswell to get rid of all of them.   Trump survives his impeachment trial at the peril of the GOP, not the Dems.

We can be thankful that public servants in the State Department and other government agencies are doing their jobs and following the rules and the law by responding to subpoenas and court orders.

We can be thankful that the SDNY is still actively pursuing illegality wherever they find it even if the person is a Trump ally… or was before Trump threw Rudy under the bus.  Stay tuned for more of that as Trump tries to pretend Ukrainegate was not done at his direction.

We can be thankful that people who care about having a democracy still have time to build a blue tsunami for 2020 that can sweep a lawless man and his complicit GOP out of office  1) register voters,  2) vow to support WHOEVER is chosen as the Democratic nominee and 3) get out the vote.

And above all we can be thankful to Trump for agitating and energizing people in America to care about our fragile democracy and realize how precious it is.

We have a lot to be thankful for.  Happy Thanksgiving to you and your family.