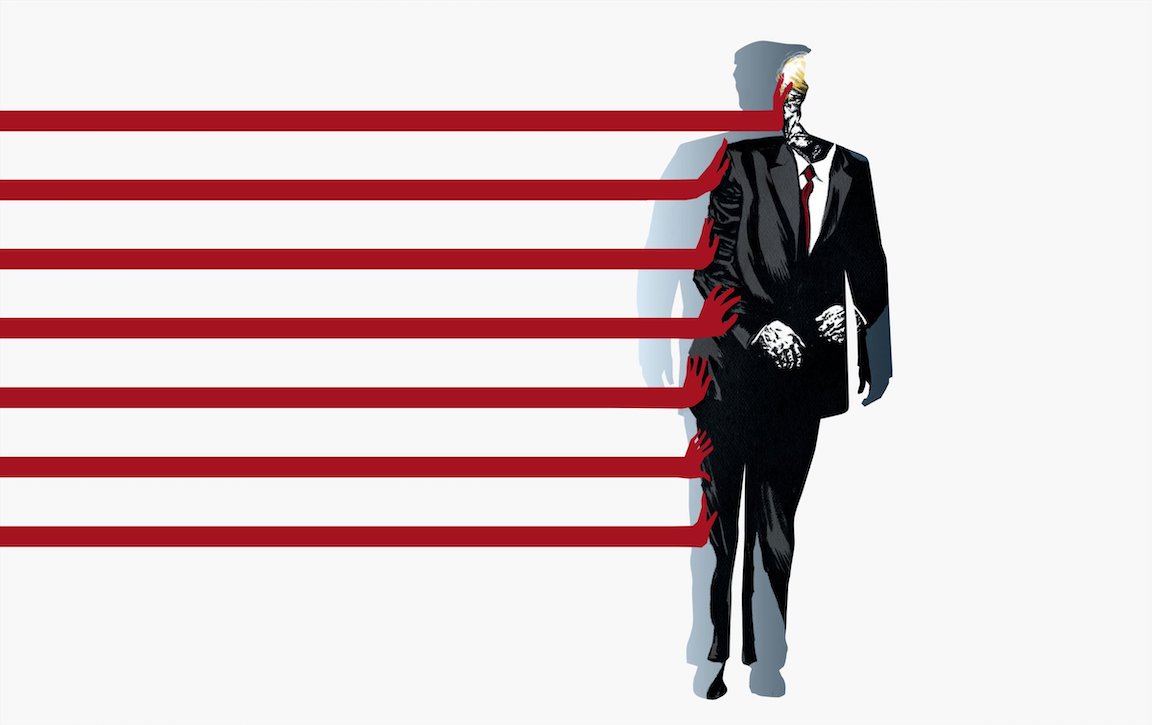 As the House readies Articles of Impeachment and our country rapidly moves towards the Senate trial of Donald J. Trump for  abuse of power and obstruction of Congress, many people are wondering what if anything can be done to alter what seems to be a foregone conclusion- Trump will be tried and the facts will be established, but he will not be expelled from office because the votes are not there with Senate Republicans.  Trump has literally paid off the “jurors” by giving Senators money for their campaigns to influence their vote in exchange for their vow not to convict him. (And if you think he has not done that, think again! he has actually already done that!! The only Senator who has not signed on to that deal so far is Susan Collins.)

As a country we are on the verge of witnessing a major collision between alternate conspiracy laden thinking crashing into facts and evidence.

Monday Republican lawmakers ranted and raved in the House Judiciary hearing that lasted 9 hours.  They were unable to counter the evidence established by about a dozen fact witnesses from the State Dept and Dept of Defense, with anything grounded in reality.  They argued 1) Biden deserved it, 2) no harm no foul since the money was disbursed (not true- it was NOT fully disbursed, there are millions still being held up) and Zelensky got his meeting (no, not in the Oval Office as promised- which matters!) and 3) Trump was deeply concerned about corruption and THAT’S why he tried to get a criminal investigation going into Biden carried out by Ukraine.  (If you believe that I have an ocean front property in Arizona to sell you.) All of these defenses are bogus.  They are simply not based on the evidence.  And the House Dems especially Dan Goldman and Eric Swallwell did a great job of making that clear today in a colloquy in which Swallwell asked Goldman question after question about who was responsible for this and who did and said that and who instructed this and that which defines impeachable conduct and the answer was Trump. Trump. Trump.  He was at the center of it all.  He directed this shakedown.

Will GOP lawmakers ever tear themselves away from Trump’s insistence that he is totally blameless and everything he did was perfect? Will they eventually fess up to the facts as they exist in the real world?  If they did it would sound like this: Okay, yes Trump did this bad stuff.  And it was wrong. But he is an unconventional guy who doesn’t know what’s in the Constitution and he was just being transactional as usual.  He knows deals.  He was making a deal.  The voters should decide whether he leaves office not Congress. The election is right around the corner.   Let the voters decide.

But that is not what we are hearing yet.

The GOP is being “forced” to embrace Trump’s alternate universe.  This makes for good sound bites for Fox News watchers and for lawmakers who want to show Trump they believe in his conspiracy laden alternate universe so they can please the base and get re-elected.  This is what you get with a man who is so deeply paranoid and delusional.  Did you hear him going on and on about having to flush toilets so many times?  No, I am not kidding.  He must have obsessed about that and other water flow and bathroom issues for about 20 minutes.  HE IS CRAZY!  And the GOP is like a bunch of lemmings following him right off the cliff.

But it is more serious than that.  Because what the GOP is doing is trashing our country by following Trump rather than protecting our constitution and the future of our democracy, standing up for the truth and the facts as they have been fully disclosed.  So far they are not coming to terms with the fact that this president committed serious impeachable offenses and will continue to do so until he leaves office.

What will happen with the upcoming impeachment trial?

There are three things that might possibly affect or alter the foregone conclusion that Trump is guilty but gets to stay on as president.

First possibility relies on John Roberts as the presiding judge.  The second is Mitch McConnell.  The trial in the Senate is structured by the leaders of the Senate and mostly by Mitch McConnell, because the GOP has a few more Senators, so McConnell gets a lot of power in the Senate. The Chief Judge, John Roberts, is an unknown.  We do not know how he will conduct the trial.  If he takes a firm hand over the proceedings as most district court judges would, he could rule on a variety of motions raised by the attorneys representing each side.  Failure by Team Trump to provide documents or allow witnesses to testify in total defiance of the power of the House, which has been part of the Trump obstruction playbook, could be summarily ended by Roberts.  He could order document production and witnesses to appear for the trial.

In other words, Roberts could force the hand of the Trump team and end their stonewalling.  People like Bolton could be required to testify.  Mulvaney and Pompeo as well.  Even Rudy Guiliani.  Will Justice Roberts take charge like that?  We do not know.  But I think he would certainly want to have a full and fair trial.

Trump claims that he wants his people to testify before the Senate, not the House.  He thinks he will be treated more fairly in the Senate.  The problem with that is if Trump continues to insist on the alternate reality version of what happened (everything was perfect and there was no coercion) he could force his closest allies to end up between a rock and a hard place, possibly perjuring themselves as they try to twist the truth and facts to fit Trump’s fantasy version of reality-  the world according to Trump.

We saw that unreal world get smacked upside the head by the IG Report just issued.  This is the big deal report that Fox News and the GOP have been waiting for to prove that the Mueller investigation was a hoax and a witch hunt.  The IG found in his 476 page report that there was “sufficient predication” to open the counter-intelligence investigation.  There were some irregularities with the way the FISA application was handled that need to be fixed.  But the FBI DID NOTHING WRONG when they opened this counter-intelligence investigation and the Steele Dossier was not the predicate for the investigation.  A tip from one of our closest allies, Australia, was the origin of the investigation.  Will Trump be able to accept that reality?  If you think Trump will accept reality I’ve got lakefront property in the Sahara Desert I could sell you.

Will the Senate trial be as much of a circus as the Trump Team wants?  Mitch McConnell is not stupid.  He has a problem with purple state Senators getting re-elected if the Senate trial turns out to be a crazy messed up circus.  Even if Trump wants the trial to be a reality TV Show with himself as the star, I do not think Mitch McConnell will want that and it is up to McConnell as Senate leader and Chuck Schumer to set up the rules for the Senate trial.  McConnell is already saying he doesn’t want a circus.  He will have to stand up to Trump because Trump is determined to insist on the alternate fact free universe he lives in in which he did nothing wrong and Joe Biden should be impeached along with Hillary Clinton, James Comey,  John Brennan and Lisa Page.  Oh, and Barack Obama too.  I could go on.  His “enemies” list is long and getting longer.

So now we come to the third potential influence and it involves you.  What can YOU do to affect what seems to be a predictable outcome in which all the evidence supports impeachment but Trump is not going to be expelled from office because the majority of Republican Senators plan to vote based on tribal affiliation for Team Trump?

Here is the best answer I can give you.  Go to the Indivisible page using this fantastic link and get active.  https://indivisible.org/resource/impeaching-trump-hold-him-accountable

If you live in a purple state, a swing state, or a state the GOP is nervous about which includes: Florida, Wisconsin, Pennsylvania, Michigan, Nevada, Arizona, North Carolina, Alaska, Minnesota, Georgia, even Texas, any state that the GOP is afraid it might lose in 2020, then you are in a really important role to affect the outcome and America needs you to act.

1) Write your Senators and insist they vote to convict and expel. Get everyone you know to do that too.

2) Go to town halls and tell your elected officials no one is above the law including Trump and insist Trump be convicted and expelled.  Bring all your friends with you.

3) Go to rallies and marches that are being organized by MoveOn.org and Indivisible across the country and get everyone you know to come with you and carry signs saying Impeach AND Convict.  There are going to be hundreds of rallies across the county the day the House votes to impeach Trump.  Go to a rally!

Support the impeach and remove effort with donations to groups that are organizing a response.

Do not be cynical and think this effort will not help.  Our lawmakers are watching the polls and the responses of Americans like hawks.  This is the way the ACA has been hanging on by its fingernails despite the GOP efforts to kill it off.  Get active and try to influence the Senate decision.  What do you have to lose?