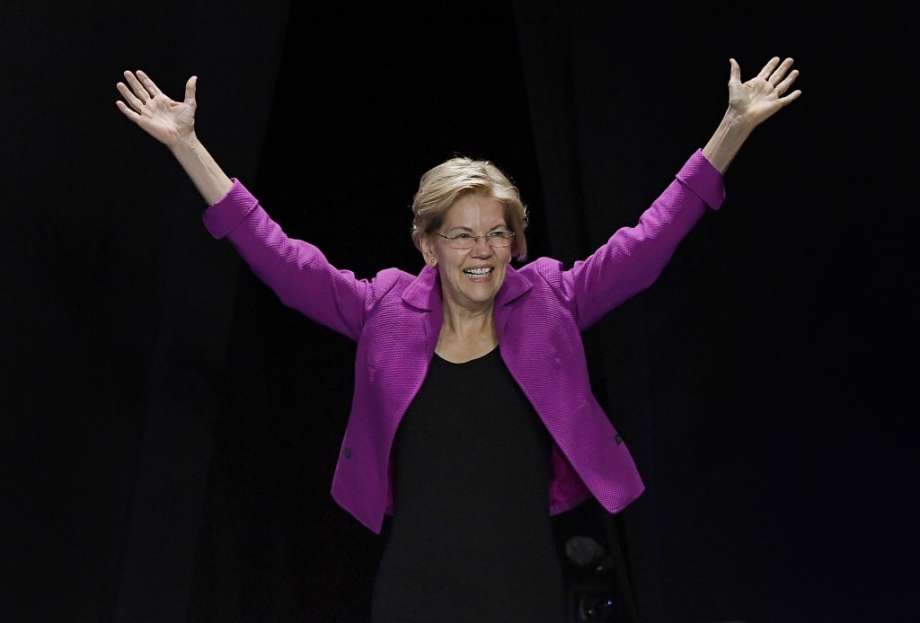 I think of Elizabeth Warren as a cross between a modern day Joan of Arc and a feisty, mission driven consumer advocate, eager to educate the world.  She is definitely a fighter on the side of the American people.  She has been a champion for consumers against big banks after the banking industry damaged the lives of so many Americans at the end of the Bush presidency.  She ran for the Senate and won.  In her campaign she established herself as the one who had a plan for everything and she was famously branded “persistent” based on her doggedness in Congress.

Note: I analyze handwriting for personality traits.  This is something I developed as a hobby since I was 9 years old.  I got good enough at it that my friends would type letters to me instead of writing their letters to me.  Eventually I used this skill as a prosecutor to assess opposing counsel and judges.  Today I use it to rapidly understand my clients who come for professional development help.  As part of this series of blogs on the pros and cons of each candidate, I have analyzed the handwriting of each one of them to get a better sense of their personalities.  I have also met a number of candidates running for president in person and talked with members of their campaign teams as well as friends of the candidates who know them personally.  And just like you, I have been listening to them and watching their debate performances. These are totally my own conclusions and opinions.

The big question for Warren is whether she can win.  In her campaign for president, she rose in the polls over time but more recently has been falling in the polls. She seemed to lose traction somehow after she waffled on Medicare for All.  At this point it looks like Bernie Sanders is poaching her followers.  She has differentiated herself from him, especially recently, but she seems to be increasingly in his shadow as his revolution gathers steam especially with the younger voter and especially in California and “blue” cities.  She has gained 8 delegates so far.

There is another factor at play when it comes to Warren and that is the fact that she is a woman.  Whether real or feared, many voters do not know whether our country is ready for a woman president.  Many women who rooted for Hillary really want to see a woman become president.  The women’s movement is feeling hopeful as we watch Harvey Weinstein led away to jail in handcuffs and we march in huge numbers to protest Trump, create groups to provide financial support to candidates running for the House and Senate, work to register voters and canvass in key states and celebrate the 2018 victory in the House with 40 new lawmakers, many of them women.

Even with these victories, the women’s movement is existentially imperiled by the regressive legislation in states across the country that are cratering women’s reproductive freedom and very soon, imperiling Roe v Wade and the rights of women to control their own bodies.  This is a five alarm fire emergency because Trump has stocked the courts with regressive judges who are going to rewrite our laws and are determined to change this country into an illiberal democracy for decades to come.  As a woman, Warren’s election to the presidency would be a strong visible rebuke to regressive forces trying to keep women barefoot and pregnant.  Her victory would ignite hope for many other progressives groups that are working hard for a return to more liberal values.  But many people are ambivalent and fearful about Warren’s ability to beat Trump.  Are we scaring ourselves out of a really great woman who could be president?  I do not know the answer to that.  But I think that if she got her poll numbers rising again, more people would turn to her as a first choice instead of thinking of her as a second choice.  Super Tuesday will be the moment of truth for her.

When it comes to Warren’s personality, as revealed in her handwriting, she has a lot of good qualities that a president should have.  She is a natural professor and educator in that she likes to clarify complex ideas and concepts for people so they really understand. She can be both serious and enthusiastic at times.  She can also be old school- a stickler for the rules and compliance with them as well as persnickety or sort of fussy and may engage in purity tests.  She is altruistic. She wants the greatest good for the most number of people.  She is also intellectual, logical, tenacious, pays attention to details, and can be cautious and reserved as well as effusive and excited.  She is able to get into the weeds and study details and understand them.  She is able to concentrate well.

Compared to Sanders she is less rigidly bold and would be willing to color between the lines more than Sanders, who is annoyed and aggrieved and unbending in his beliefs.  She has a sharp tongue and will use it to attack when the circumstances call for it especially in the role of an avenger for a cause she believes and particularly if there is an underdog being hurt by what she perceives as bullies.  Sometimes she overthinks things.  She might also come to a conclusion she deeply believes and, like a dog that grabs hold of a pants cuff with her teeth, keep attacking and attacking, forcefully interrupting and attacking some more past the point of needing to.  We saw that kind of behavior during the debate.  I wonder if that might be what has hurt her candidacy.  Her persistence, which is so positive in many ways, can have a downside.

As the very stirred up progressive voters on the left looked for the person they believe can both take on Trump and win in November, they have gravitated to either Bernie or Elizabeth.  If they choose Elizabeth, she could have a better path to victory in the general election than Bernie Sanders given the strongly negative reaction Sanders engenders in suburban voters, some number of former women supporters who were turned off by the “Bernie Bros”, and the fact that Trump will be able to terrify many right leaning Independent swing states voters about Bernie being a rabid socialist. (He isn’t but that’s how the right will portray him.  Millennials do not understand that old Boomers, who vote in large numbers, hate, fear and detest socialism.  Boomers are wrong about socialism but Bernie’s hopeful missionaries for progressive revolution won’t change their stubborn minds.)

The problem with the Democratic Party is that the tent is so big that it is probably impossible to stretch it to please all of the factions under the tent.  Warren has the potential to win in the general election because she has more general election appeal based on her policies and her commitment to help Americans which is perceived as authentic (because it is).  She appeals to most lefty progressives enough to gain their vote, if Bernie were to recede, to keep them from staying home and sulking on election day.  She would appeal to women who felt robbed in 2016 if she could just gain traction in the polls which would give women faith in her ability to win. She would not suppress the vote in down-ballot races or in the suburbs the way Bernie would.  And I personally think Warren could turn out to be a good president because she sincerely has the best interests of Americans at heart, the spirit and energy to inspire, as well as the brains to manage well.  If you want a modern day version of Joan of Arc as our first woman president, cast your primary vote for her.  She needs your support.

Trump’s Nonsense Catches Up With Him