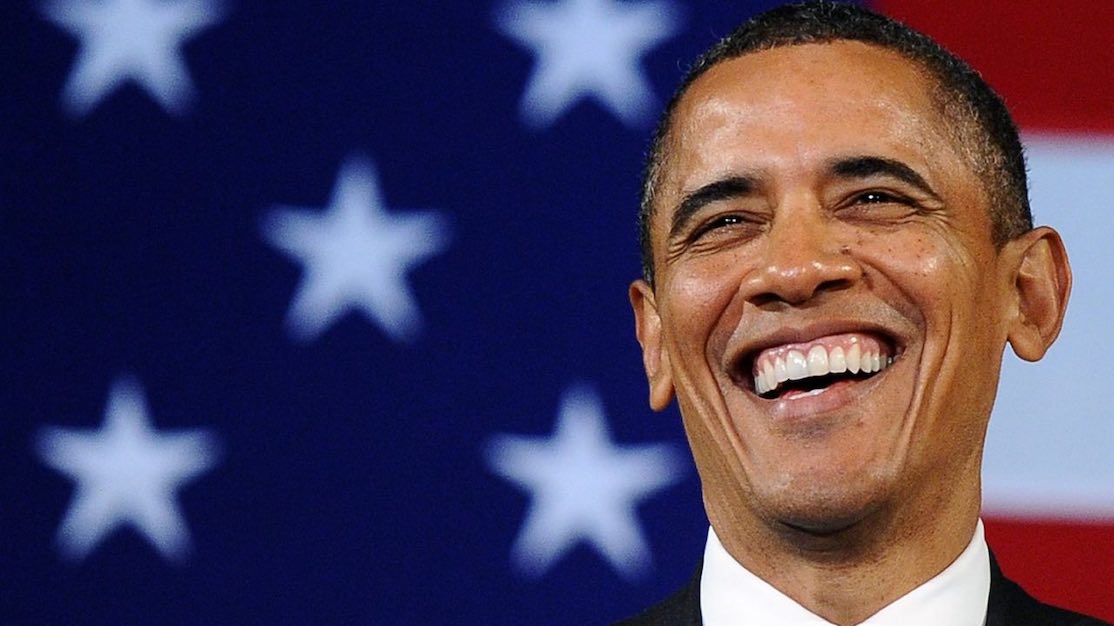 Easter 2020.  20,000 Americans have died from Coronavirus and will not rise from the dead.  They died alone on ventilators.  Too weak to be aware that they had lost the battle with Covid-19.  Their families could not be by their side to say goodbye or to comfort them.  Our country and South Korea reported our first confirmed cases of coronavirus to the World Health Organization on the same day, January 20th.  Since then our country has had 50 times the number of deaths compared to South Korea.

Two months later, the U.S. has nearly 9,000 more confirmed cases than South Korea, according to Johns Hopkins University. And while cases in South Korea are on the decline, the number of cases in the U.S. is growing at a faster rate than any other country in the world as of March 19, according to Hopkins’ research.

Here is the answer: Trump is failing to lead.  He did not lead from the beginning.  He CONTINUES to fail to lead.

What would Obama have done if he had been president when this pandemic occurred?  We know the answer to that.  How?  Because he has tweeted out some of his thoughts and we know what his administration did to set up protections after the Ebola outbreak of 2014.

Let’s start with what Obama has recently tweeted out. “Social distancing bends the curve and relieves some pressure on our heroic medical professionals. But in order to shift off current policies, the key will be a robust system of testing and monitoring — something we have yet to put in place nationwide.” Obama calls for testing and monitoring (tracing and tracking) to locate those who have it and are exposing others to the disease.  Once located, these people would be quarantined so that others would not be infected. This was the approach in South Korea.  Obama calls for a NATIONAL plan and response.  He would have provided that rapid national response. If elected, Joe Biden would follow this approach.  You can read his op-ed in the NYT today.

Obama also retweeted a NYT article about how we have to take draconian measures to beat this virus.  Compare that to Trump’s dalliance with the idea of opening up the country again on May first.  Trump has not yet decided to do that, but he keeps leaning in that direction.  Why?  There is a realistic need to try to balance the damage to our economy against the damage of re-opening too soon.  But Trump is driven by a fear that the economy will not revive in time for his re-election.  He worries more about that, it seems, than additional American deaths if we re-open too soon.  That may be the reason why there has been a strong federal response to the economic situation but a weak, inarticulate national response to the health crisis.

We also know what Obama would do based on what Ron Klain says.  Who is Ron Klain?  Obama’s former Ebola czar who, in 2014, along with Joe Biden, managed the response to Ebola and later helped to create a first alert system around the globe to protect our country and the entire world from just the kind of pandemic we are experiencing now.  Ron Klain is also the person Joe Biden would put in charge on day one if he is elected president.

The first response to a pandemic is to know it is coming because you have a global first alert system set up.  Then you try to contain the virus.  You send a team of people to the affected area as Obama did with the Ebola outbreak.  If that fails, you mitigate using the kinds of approaches countries are employing now- shut downs first followed by well planned re-openings in certain areas. Want to guess how many Americans were killed by Ebola on American soil?  Two.  Because it was contained in Africa.

Here is what Ron Klain says about how to respond to a potential pandemic:

The high-level lessons applicable today are, first and foremost, let the medical experts be the touchstone of the responses—let them be the people who are formulating this strategy, let them be the spokespeople. And, secondly, use every power that the federal government has to harness that direction into effective action, whether that’s getting the right equipment produced and put in the right places, whether it’s getting the right people mobilized and put in the right places. The federal government has vast power to do things if a president is willing to use it effectively. Those are the two things, by the way, that are both missing from the current coronavirus response.

In other words, the federal government MUST use its national power to have an effective response.  Trump calls himself a wartime president but fails to use the federal powers he has to mobilize as you would for a war.  Trump has no national plan.  He is saying that governors are in charge.  “I take no responsibility at all,” he has said.  By doing this Trump is setting it up to blame everyone and anyone but himself for the mess we are in.  He tries to tag the Governors and say “you’re it”. He will blame them if things don’t turn out well.  If things do turn out well, we know Trump will be the first to take credit.

Many governors are stepping up to do what they can and are earning the approval of Americans.  But they do not have the same federal powers the president has.  Across the country governors are making the tough choices and fighting on the open market for personal protective equipment that our front line workers need to fight this disease.  Because of Trump’s failure to lead, governors have been forced to compete against each other, other nations and our own federal government! for the supplies they need to fight this war.  Governors are appearing on cable news shows literally begging for help from Trump.  Andrew Cuomo of New York.  JB Pritzker of Illinois.  Jay Inslee of Washington.  Gretchen Whitmer of Michigan.  The governors can only do so much.  Only the federal government has the power under the Defense Protection Act to get our nation up to speed on these key elements we must have to wage a successful war against coronavirus the way other countries are including South Korea, Iceland, New Zealand and others.

We also know how the Obama administration responded to the H1N1 virus that could have become an epidemic.  Within two weeks of the first case in the United States, Obama declared a public health emergency and requested billions of dollars from Congress to develop tests.  Compare that to Trump who did not take action for at least 6 weeks as Covid-19 exploded across the globe and Trump got warning after warning from his own administration that he not only ignored but rejected as a Democratic hoax and a plot to hurt his re-election campaign.  There is some evidence that Trump did not trust the information he was getting from what he calls the “deep state”, which is really nothing more than civil servants who work for the federal government.  This is what you get with a severely paranoid man, which Trump is.  He sees conspiracies out to get him everywhere.

Today Anthony Fauci admitted on CNN that an earlier start would have saved lives.

“Obviously you could logically say that if you had a process that was ongoing & you started mitigation earlier, you could have saved lives. Obviously no one is going to deny that.”

Well that process was in place when Obama left office.  When Obama left office there was an international first alert system in place including a watch dog in China who would have reported the development of Covid-19 if he had been there. But he wasn’t. Why?  Because Trump had removed him.

And when Obama left office there was a task force team that Trump inherited.  That team gave the incoming administration a pandemic briefing about how to handle a potential epidemic.  There was also a guidebook for the Trump administration about how to handle a growing pandemic threat.  What happened to these first alert systems?  Trump with his inability to work with people has long since removed many of those federal workers who attended that meeting.  Trump, with his petulant and peevish hatred for all things Obama, also dismantled the task force that would have protected us, and he ignored the task force guidebook.

Even with all of that, Trump still received numerous warnings in January from his HHS director, Alex Azar, and on January 29th from his economic advisor, Pete Navarro, who wrote this memo: 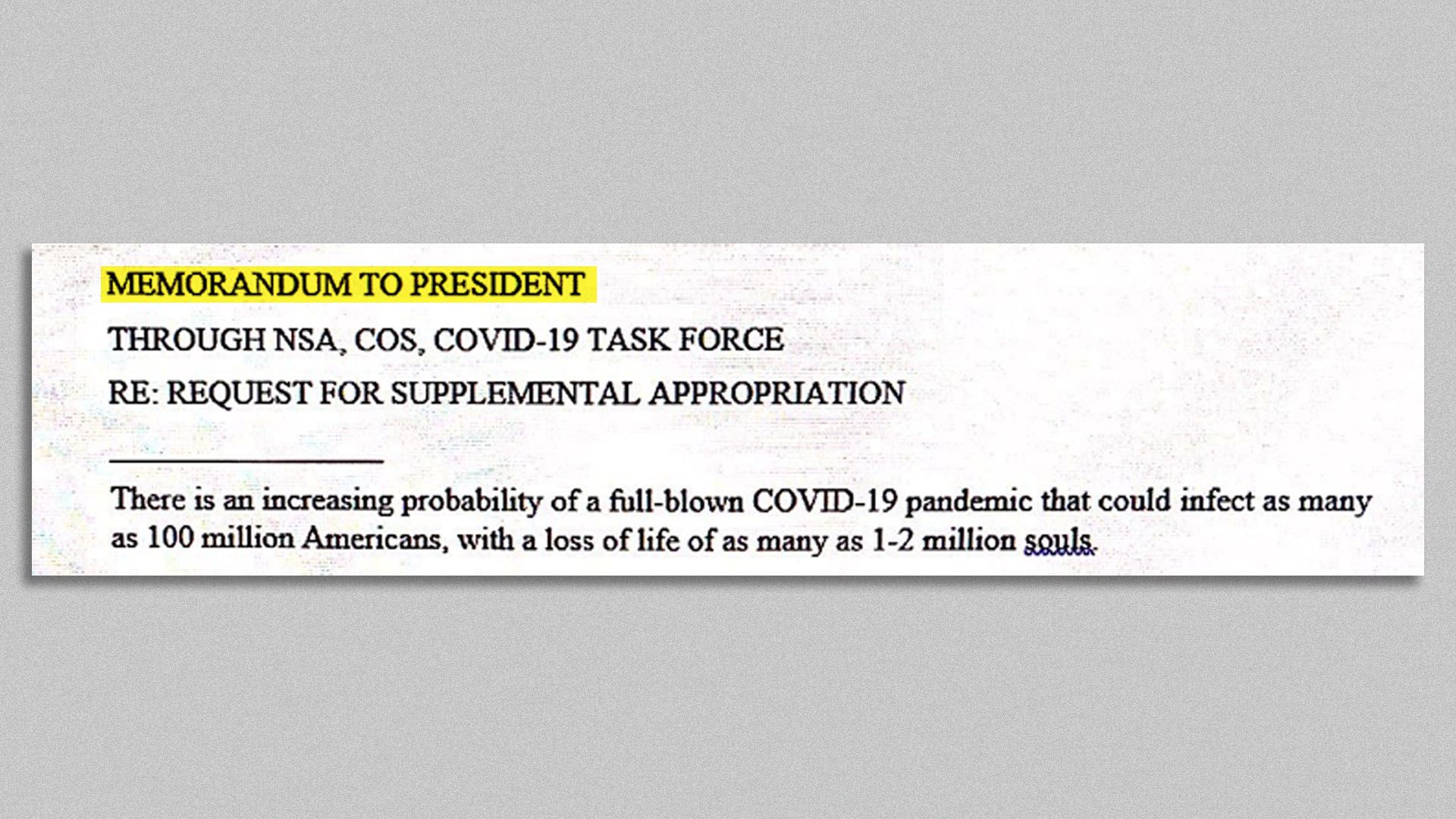 Trump ignored ALL of these warnings.
When Donald Trump was running for president he asked Americans “What do you have to lose?” by voting for him.  Now we know.  He was dangerous because he was unfit to be a president.  He doesn’t listen.  He doesn’t learn.  He never pivoted to care about all Americans.  He only cares about himself, being admired, getting richer, and getting re-elected.
What did Americans have to lose with Trump as president?  Over 22,000 American lives so far… and counting.  What do Americans have to gain by voting Trump out in November?  A response to the pandemic that will save lives.