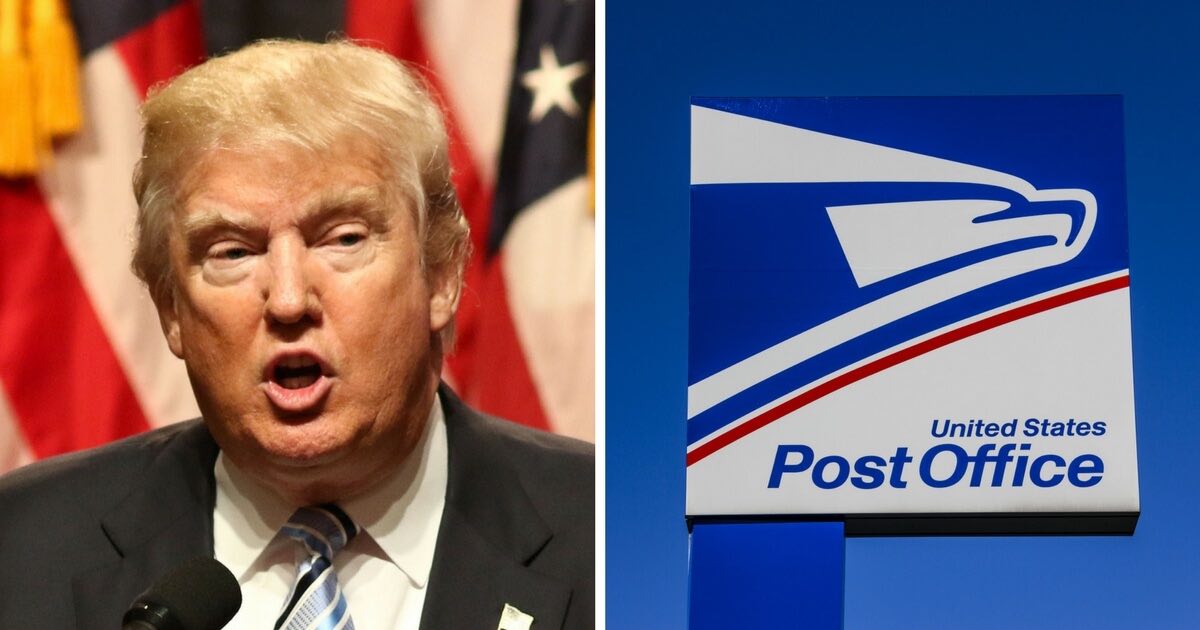 Article 1 Section 8 of our Constitution established a postal service in this country. The US Postal Service has been one of the great achievements of our government and one that nearly every American relies on for medicines, small package delivery, social security checks and all kinds of mail, not only during the holidays but year round.  The post office delivers mail to every single American in our country no matter how rural the zip code may be or how difficult the weather may be. Americans also really like their postal system.  The post office gets a 91% approval rating from Americans! Hard to get that kind of support these days for anything given our divisive country.

However, it has been a longstanding wish of some politicians on the right, including libertarians, to have limited government and an expanded private sector take over the delivery of our mail. One of their deepest desires has been to get rid of the Post Office.  For example, the Cato Institute, a think tank that is libertarian in its political philosophy and advocates a limited role for government in domestic and foreign affairs, has called for the deconstruction of the postal service.

Trump’s administration is full of Republicans who want smaller government. That Republican yearning to shrink government is combining with Trump’s desire to try to limit mail-in voting to win re-election, and it has resulted in a toxic brew that now threatens our faith in our elections. We are in the middle of a raging pandemic in this country. Most people understand the danger of standing in a long line and entering a crowded space to vote. That exercise of your right to vote could expose you to a lethal virus that could take your life.

So how to vote during a pandemic?  The obvious answer is to vote by mail.  34 states have mail-in voting without any need to explain why you want to do so.  No need for a medical excuse to vote by mail, for example, or to be over a certain age.  But a number of states do have restrictions to voting by mail.  In other words, states have different rules about mail-in voting. All the information is on the Secretary of State website for your particular state.

Trump makes a false distinction between mail-in voting and absentee voting. There is, in fact, no distinction. States handle both in the same way. Trump claims, for example, that Florida’s absentee mail-in voting system is just fine and dandy.  He uses it himself. But he erroneously claims that widespread mail-in voting is rife with fraud. That’s just wrong.

Trump has openly said that he wants to sabotage the USPS to limit mailed in ballots:

“Now they need that money in order to make the post office work so it can take all of these millions and millions of ballots…But it they don’t get those two items (money for USPS and election assistance for the states) that means you can’t have universal mail-in voting…” [Trump’s interview on Fox News on Thursday.]

I think this attack on the USPS could backfire on Trump. Democrats may be secretly jumping for joy to hear Trump attack the USPS in this way because this gives them an opening to woo rural voters, and people in the military who used to be sure-fire Trump voters not to mention the 97,000 vets who work at the post office.  Many voters are going to think twice about voting for Trump because of his assault on the postal service that delivers our medications, social security checks, packages and provides jobs for vets. Republicans need to speak up because many of their voters live in rural areas and could be disenfranchised.

This attack on the USPS is one more bizarre idea among many that Trump has glommed onto and will not let go of.  The guy is like a dog with a bone once he gets an idea no matter how looney tunes it may be. No one can convince him otherwise.  In this case, he is surrounded by small government Libertarians and left over Tea Party members, including Mark Meadows, now his chief of staff, in his inner circle who don’t even want to try to convince him otherwise because they want the same outcome- they too want to deconstruct government including the USPS.

Trump appointed one of his loyal donors to head the USPS, Louis DeJoy.  This is a man with no prior experience with the Post Office and many conflicts of interest because he has investments in companies that are out to replace the USPS with their own for profit companies. DeJoy set about deconstructing the USPS from the moment he took charge.

Clearly the USPS needs more money to sustain its ability to process the wave of ballots that are coming, therefore Congress should approve the Covid relief act that the House passed months ago and is sitting on Mitch McConnell’s desk.  That bill contains ample funds for the USPS. The Senate should pass that bill.  But instead of acting, the Senate has gone home.  Yeah. They left town! These Republicans need to be voted out of office.  All of them.  They are not helping our country. They are a bunch of ninnies- overly fearful of Trump twitchy Twitter finger.  Man up, you ninnies!!

First, Americans have to express their outrage so that the Democrats (and some Republicans) in the House and Senate can speak up on behalf of the American people and show the receipts to prove it. It helps if the American people give their elected Representatives the support to make that claim with letters, emails, calls and tweets.  And they are.  That is step one.

It has already been effective. The result has been that USPS has agreed not to remove more mailboxes and call a halt to the removal of sorting machines.  The Postal Inspector General is investigating DeJoy. That’s a start. But not enough.

The House is planning to return to DC.  It just announced it will accelerate its oversight of the Postal Service. DeJoy and postal service board chairman, Robert Duncan, have been invited to testify before the House on August 24th. They better show up.

The House has to get DeJoy to reverse his so-called cost cutting measures and find another way to be sure that ballots are processed on time. Many states have laws that if the ballot is not received BY Election Day they will not be counted.  Most of the states have been warned by that the USPS might not be able to get ballots delivered by election day. Many of these states include key battleground states: Michigan, Wisconsin, PA, Georgia, Arizona, Colorado, and Nevada. This is unacceptable.

This problem could be fixed by changing state laws to extend the time frame for valid receipt of a mailed ballot (which is being requested in various states but is being opposed by the RNC and Trump campaign in a case in Pennsylvania right now). Another possible solution would be to require the USPS to treat ballots as first class mail instead of regular mail. There may be other solutions as well.

One possible additional solution already being used in primaries across the country is to have very secure, tamper-proof drop boxes set up by the Secretary of State in each state with security cameras on at all times.  That way a voter does not have to rely on the mail to get the ballot in on time. A voter can simply drive over and drop their signed, sealed ballot into the drop box whenever they are free to do so. This will not work for everyone, but it could reduce the burden on the post office.

Second, we still need to keep up the pressure campaign. The more Americans create a ruckus about this the better.  So write your Senator whether he or she is a Republican or a Democrat. They need to hear from us. There are people showing up to peacefully protest in front of DeJoy’s condo in Washington, DC.  That’s good as long as it is peaceful, of course. It should help to build the case that Americans are insisting that the USPS get funded.

What else can YOU do if you have to do a workaround these barriers to your right to vote?

1) Check your registration TODAY online using the website of the Secretary of State in your state. Be sure you are registered to vote. Tell your friends and family to do the same.

2) Go to the website for your Secretary of State TODAY to sign up to get your mail-in ballot if your state allows that. Tell your friends and family to do the same.

3) In some states (California, Michigan, Georgia and others) you can even track your ballot like a package so you know it is on its way.

Do everything early. Apply for your mail-in ballot early. When it arrives fill it out early. And mail it early or drop it off in a designated drop box if you can.

Beat the rush. Beat Trump at his game of cheating to win reelection.