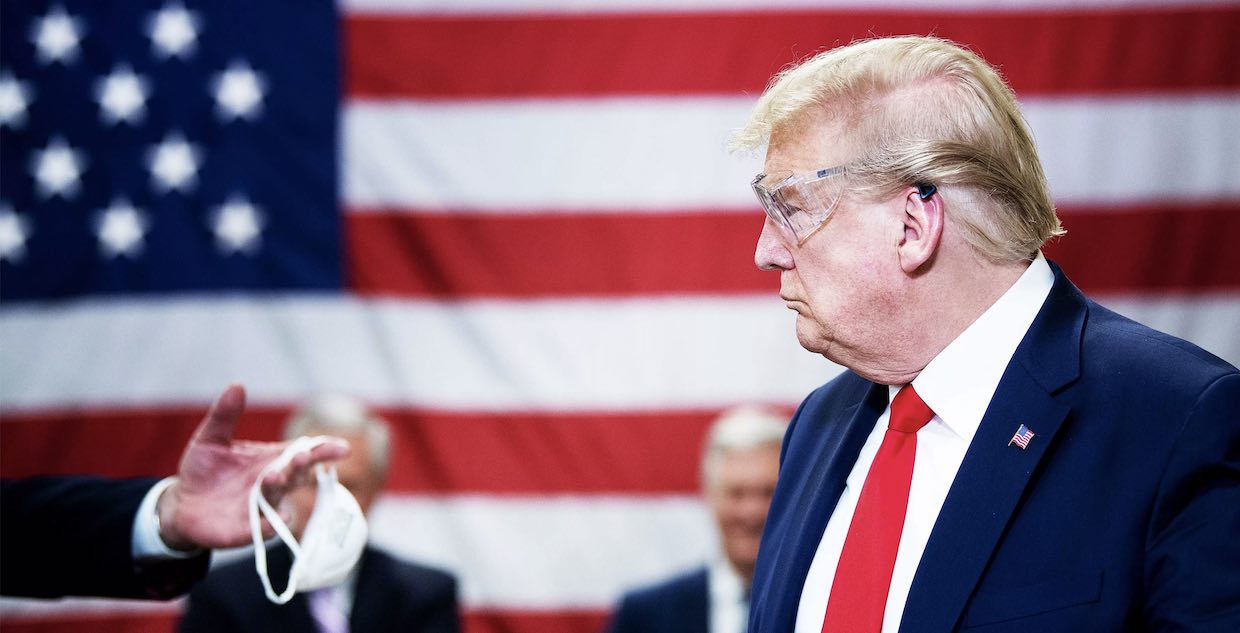 After downplaying the coronavirus over and over again despite being well aware of its contagiousness and lethality, and after mocking people for wearing masks to prevent the spread of the virus as being less manly, the pandemic is showing Trump who’s boss.

This is the very definition of poetic justice.

Poetic justice:  An outcome in which virtue is rewarded and evil punished, often in an especially appropriate or ironic manner.

Covid-19 has penetrated to the heart of the Trump administration and his reelection campaign. There’s a pox on both Trump’s administration and the Trumpified GOP. Here is the list of the sickened so far: Trump, Melania, Hope Hicks, Senator Mike Lee (who sits on the Senate Judiciary committee) and Senator Thom Tillis (on the same committee), Ron Johnson, Ronna McDaniel (head of the RNC), Trump’s campaign manager, Bill Stepien (Trump’s campaign manager), Kellyanne Conway, Chris Christie (who is now hospitalized),  Reverend John Jenkins (Notre Dame president), three reporters and 11 people who worked to prepare the debate space on Tuesday. Oh, and Nicholas Luna, Trump’s bodyguard, and Monday Kayleigh McEnany tested positive. More people are expected to test positive in the coming days.

A few days before Trump tested positive for Covid, the NYT published a piece about coronavirus misinformation and denialism. A research study done by Cornell University looked at 38 million articles for the sources of misinformation about Covid-19 to find the origins of the “infodemic”. Guess who was at the center of the spread of misinformation? If you guessed the president, you were right. Donald J. Trump was the single biggest source of  misinformation (at least 38%).

How Did This Happen?

As Nancy Pelosi said, “Going into crowds unmasked…was sort of a brazen invitation for something like this to happen.” Yes it is. But Trump has pushed pandemic denialism.

First, it was the way Trump planned to get his voters out to the polls in person to vote for him. He was pushing the idea that the whole pandemic thing was overblown. Trump’s message was. “Just go to the polls in person to vote for me. Then when the wimpy Democrats vote by mail in ballot, we will find a way to discredit those ballots.” That was the game plan. It may still be the game plan if Trump gets out of the hospital in time and claims the experience was no big deal. That’s what Brazilian leader Jair Balsonaro did after his bout with Covid.

Second, denialism was also useful to try to push states to reopen faster. Trump wanted to kick start the economy without doing the real work that needed to be done: a national plan to get PPE and other needed supplies, testing, tracing, mask mandates, social distancing. Instead of following CDC guidelines for reopening, Republican governors and state legislatures fell into line with Trump. Governors like Florida’s Ron Di Santis have opened up their states even as cases are going up again there. The Republican state legislature in Michigan just voted down the Democratic governor, Gretchen Whitmer’s, renewed emergency order for the state of Michigan.

Denialism is also a way of life for Trump. It’s the closest thing he has to a religion. It’s his version of Norman Vincent Peale’s “power of positive thinking” to remake reality. He has done this for most of his life according to his niece, Mary Trump. He really believes his power to think happy thoughts will protect him. If he believes he is special and super human, then he is. Could he get sick after being exposed to Hope Hicks in close quarters? Naw. He lives a charmed life. He is invincible.

Why the Rose Garden Superspreader Event Could be More Poetic Justice

The Rose Garden event to celebrate the rushed effort by the right wing to appoint ultra conservative Amy Coney Barrett to replace human rights icon Ruth Bader Ginsberg is turning out to have been one of the vectors of the disease. It was a super spreader event. People were packed in close and only a few wore masks. There was a lot of hugging and hand shaking and close talk at that victory celebration.

That event was attended by numerous Republican senators on the Senate Judiciary committee who will need to show up IN PERSON for a final vote in that committee if Barrett is going to get onto the court before the election. Mitch McConnell cannot afford to lose more than two votes. He acknowledged that the Rose Garden event and subsequent  “cluster” of Covid cases could threaten his plan to bum rush Barrett onto the Supreme Court.

The fact that Trump has consistently played down this disease and acted like it was nothing to worry about, his cavalier attitude about wearing a mask, his mockery of Biden at the debate because Biden does wear a mask and is very careful about social distancing, is the definition of poetic justice. You have to wonder. Maybe there IS a God after all. Or maybe Mother Nature had had it with Trump’s denial of science.  She decided it was time to teach Trump a lesson about reality, truth and facts. And his followers too. Although it is not likely Trump or his followers will learn the lesson. Or could it be Ruth Bader Ginsburg is exerting supernatural power from the grave to fulfill her last wish that the appointment of her successor be made by the next president? Hmmm.

How is Trump Doing, Really?

Trump was first reported to have mild symptoms including nasal congestion and tiredness but then it was learned that he was given Regeneron at the White House, an experimental treatment, virus neutralizing antibodies to help the system fight the virus. Giving it early in the course of the disease is the right thing to do.

Once at Walter Reed he was given Remdesivir. That is also more effective if it is given early. Trump falls into a category of people who are at risk to develop life threatening problems from Covid. He is morbidly obese, a man, over 70 and he has a heart condition.

The White House fog machine is not being very transparent about what is going on with him.  And whatever they say is tainted by the number of lies that have been disgorged by this administration. It is unlikely that the administration will do anything other than paint the rosiest of rosy pictures no matter what happens because optics are everything to Trump.

Dr. Sean Conley, the official doctor-spokesman for the administration said Trump was “just 72 hours into the diagnosis now…and is doing very well.” He claimed Trump was not on oxygen now, which reporters picked up on. Had he been on oxygen before? Conley was evasive about whether he had been on oxygen before. We have since learned that he was given supplemental oxygen at the White House before he left for the hospital.

An anonymous source at the hospital contradicted the administration’s rosy picture:  [T]he president’s vitals over the last 24 hours were very concerning and the next 48 hours will be critical in terms of his care. We’re still not on a clear path to a full recovery.  The anonymous source turned out to be Mark Meadows.

What Does This Do to Trump’s Reelection?

Getting sick with Covid was definitely not in the Trump reelection playbook 30 days out from the most consequential election in our nation’s history and in his own life if he hopes to avoid going to prison for breaking numerous laws.

Trump has defied science and refused to implement and endorse the basic things he has been told by people like Dr. Fauci that we must do to control this pandemic. Trump is always the rebel. He always thinks he knows better. What better proof could there be that Trump is wrong about his approach to the pandemic now that he himself has contracted Covid and so many others in his administration have gotten it also? This alone should damage Trump’s reelection chances. Even if he emerges from the hospital claiming that he was never really that sick and everyone was just being overly cautious, I think the truth will leak out. And who knows how many people Trump and his cohort have infected? I do not see how this turn of events helps Trump get reelected.

Trump being out of commission creates some very real benefits for our country. Maybe now we can have a free and fair election without his interference. Wouldn’t it be nice if Trump was too out of it to rally the Proud Boys to patrol polling places and terrify voters away? Wouldn’t it be delightful if Trump was too out of commission to tweet anymore?  And it wouldn’t it be lovely if he lost even more voter support after it registers with the public that Trump’s claim that we are doing great and we are past this pandemic was nothing but a big fat lie?

You have to wonder if Trump knew he was sick on Thursday.  On Thursday he went to a fundraiser in Bedminster with some of his wealthiest donors. He interacted with them in a close setting without wearing a mask. If Trump already knew he had Covid, then he knowingly risked the lives of about 150 heavy hitter GOP donors. They can’t be too happy about that.

Why did he do it? Reports are that the Trump reelection campaign is so strapped for money (many GOP donors think he is going to lose, so they are putting money into Senate and down ballot races to try to preserve their power) Trump felt he HAD to go to this Bedminster fundraiser to meet with his top donors for that photo op to refill his campaign coffers.

Why It Would Be Better if Trump Survives Covid

Trump is deeply disliked by millions of people in this country. He is despised by some. For good reason. He has attacked, insulted, demonized, demeaned, divided us and lied to us. Many people on social media would probably be happy if he died.  I am not one of them. I hope he comes through this experience in time to see himself voted out of office in a landslide for Biden and Harris. It would be poetic justice. Our country needs to reject Trump and Trumpism in a resounding way if we are going to unify again and come together as a multiracial country that accepts everyone, treats people fairly, and reinvests in the American dream for every hard working American.