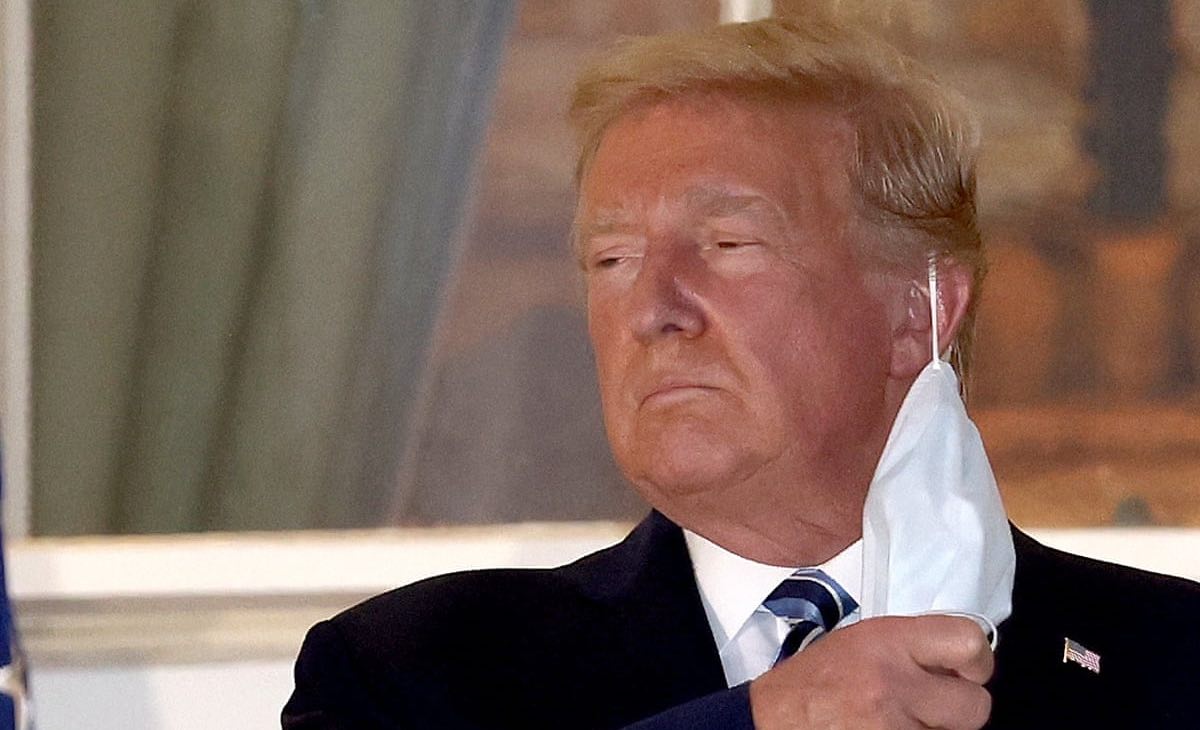 On Monday evening Donald Trump left Walter Reed hospital after a short stay and staged a reality TV event starring himself as the victorious winner of his fight against Covid. He wants us to believe he is an all powerful, god-like figure who was hardly touched by this thing. He wants us to think he was in the hospital out of an abundance of caution.

In this episode of the reality tv show we have been subjected to now for almost 4 years, we see Trump emerging from the hospital, lumbering to the helicopter, then reemerging on the lawn of the White House, putting one foot in front of the other, trudging up the stairs to the balcony, where he triumphantly removes his mask for the ultimate moment of spin, standing there visibly laboring to breathe. He wants us to think of him as Donald Trump Super Star. Instead, he is Donald Trump Super Spreader, the ultimate poster boy for optics and spin.

After Trump’s Evita photo op on the balcony, he goes inside the White House. No mask. Interacting with staff there who are being exposed to him. (His personal valet was reported to have tested positive on Tuesday and more will be sickened by him.) But come hell or high water Trump will use his bout with Covid as further proof that the pandemic is no big deal. This, he thinks, will be his winning final argument for reelection.

I don’t think so.

He might try to say Covid is no big deal for him, but tell that to the families of the 210,195 Americans who have died from it. Trump’s reality doesn’t square with the real reality, only his fabricated reality.

Americans don’t have access to the kind of care Trump got and is still getting in the White House which has become a hospital- lite treatment zone. Trump got special treatment: state of the art medical care, a team of doctors to minister to him, no worry about the cost of his treatment, access to the best treatment, and even an experimental treatment (Regeneron monaclonal antibodies) not available to any other American yet. Americans don’t get that kind of treatment when they show up gasping for breath at the ER.

Worse yet, thanks to Trump and the GOP, many Americans may be about to lose their health care altogether. The Supreme Court could be ready to strike the final blow to the Affordable Care Act, leaving millions of Americans without access to health care and eliminating protections for people with pre-existing conditions.

Trump’s approach to the pandemic is to ignore the pain and suffering of Americans and tell them they are over-reacting. Will they buy that? Can he sell Americans another Trump steak? Trump University? Trump con job? On Friday, new Covid cases hit their highest level in the US since mid-April.

Trump has not only decided to continue to downplay the virus but to trash any scientific or medical thinking that runs counter to his public relations spin that we should all go about our business as usual. “Don’t let it dominate your life,” he say. Tell that to the Americans  working from home online while their children are also there instead of in school. Tell that to essential workers who are risking infection every day just doing their jobs. Tell this to families who have lost loved ones to the pandemic. Disinformation is the Trump brand. He creates his own self-serving reality and demands that everyone else buy into it. Everyone around him must parrot his crazy thinking or endure ridicule and banishment.

Trump is heavily invested in making Covid out to be nothing, so that he can be seen as the strongman who will get our country back on track. He seems to be willing to allow millions of us to die to get to so-called “herd immunity.”

His supporters do believe he is godlike.  Trump briefly left the hospital Sunday for a drive by parade in his hermetically sealed car, aptly named “the Beast”. Trump waved from inside the vehicle behind the glass at his adoring fans who had been loudly rallying outside Walter Reed hospital. Did anyone think about the secret service people who were inside that car with him getting exposed to Covid? Didn’t Trump knowingly expose those two agents to a possibly deadly disease? Why is that not cause for a wrongful death lawsuit if one of them dies as a result? Trump is a super shedder and a super spreader right now, some 7 to 10 days into his disease. He has turned the White House into a Covid hot spot.

Trump’s lead doctor at Walter Reed tried his best to put a glossy, happy talk spin on Trump’s condition. Like everyone else around this president, you are forced into happy talk instead of reality talk. Nonetheless, it was evident from what he did and did not say that Trump did and still does have a moderate to severe case of Covid, with Covid induced pneumonia. He has had at least two bouts of difficulty breathing for which he got oxygen.  He is on a five day course of Remdesivir which is not given to people who are not at least moderately sick with this disease. He is on dexamethasone. That last drug is a steroid that makes many people feel they are indestructible and more powerful than they really are. No wonder Trump says he feels better than he has in 20 years.  That sounds like the steroids talking. Unfortunately, that drug plays directly into Trump’s preexisting mental infirmities. He already thought he was all powerful and unstoppable. Did he really need more of a boost in that direction? “Maybe I’m immune!” Trump said.  No. You are a super shedder and a super spreader.

The CDC finally came out with their revised guidance about the airborne nature of Covid-19. Here is what they said:

“There is evidence that under certain conditions, people with COVID-19 seem to have infected others who were more than six feet away,” the updated page states. “These transmissions occurred within enclosed spaces that had inadequate ventilation. Sometimes the infected person was breathing heavily, for example while singing or exercising.”

“Under these circumstances,” it says, “scientists believe that the amount of infectious smaller droplet and particles produced by the people with COVID-19 became concentrated enough to spread the virus to other people. The people who were infected were in the same space during the same time or shortly after the person with COVID-19 had left.”

It will be interesting to see how a reality denying Trump manages to get back on the campaign trail and participate in his condition. He is still at risk of relapse.  Even his happy talk doctor said he was “not out of the woods yet.” Trump could have relapses days after being released from the hospital. Many people with Covid do. Herman Cain who went to Tulsa for that Trump super-spreader event died 28 days after being diagnosed with Covid. Above all, it is clear that Trump cares not at all about infecting others. Given that, the Biden campaign should insist that if Trump makes it to the townhall debate on October 15th , that he participate from inside a plastic bubble with an airhole vented to the street.

David Gergan is calling Trump a madman. Carl Bernstein is saying our country is has a president who is both physically and mentally sick. Fifteen or so US Senators who are said to despise Trump are also reporting they are scared. Members of this administration are dropping like flies. Evil, nasty Stephen Miller has been stricken. The Joint Chiefs of Staff have gone into quarantine after a Coast Guard official tested positive for Covid including General Mark Milley.  Even if this president did not directly infect all these people in his administration, his deluded approach to the virus did.

This president is jacked up on steroids, panting for breath, mentally unstable, reckless, and unmoored. This is what we have come to in our country. Our president is the biggest public health menace out there. Our country is under seige from our own deranged president.

Americans are voting right now. Early voting has begun across the country. And new polling shows Biden at 57% to Trump’s 41%- a 16 point lead for Joe Biden. And “for the first time in this poll since Trump took office, fifty per cent of respondents said that they had a “very negative” view of him.” If Trump is not willing to protect himself, his staff, his allies, and his supporters from this pandemic, how can Americans expect him to do the things we need to get the country functioning again? The answer is clear. There is only one choice that makes sense for our country. Joe Biden has to win.