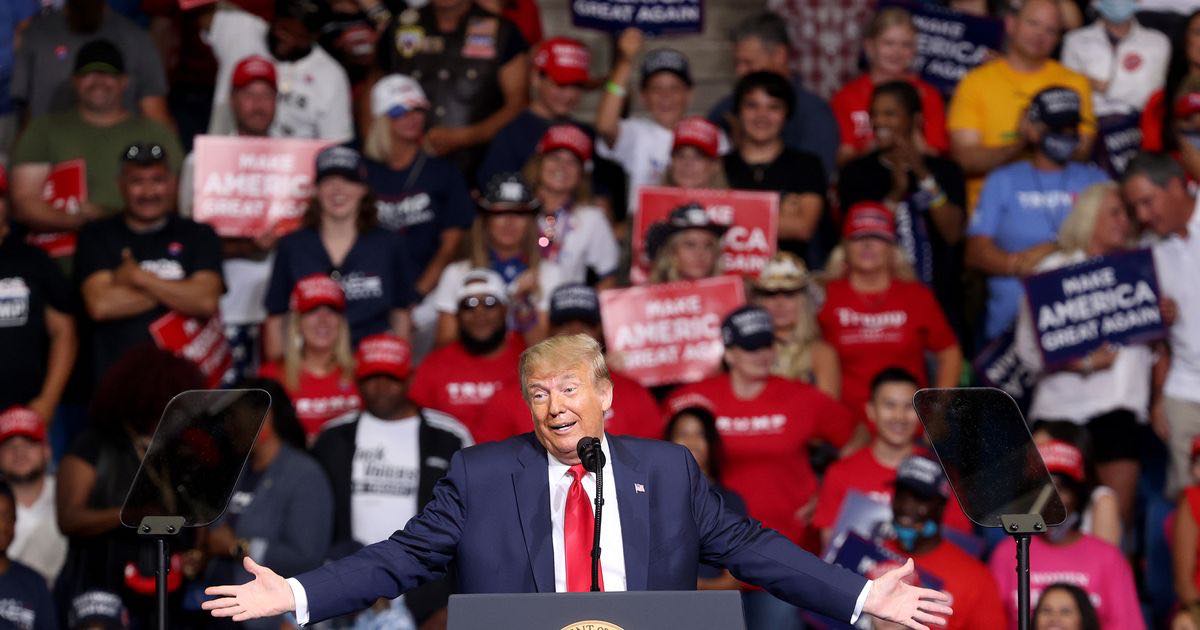 Donald Trump was not psychologically well before contracting Covid-19, being hospitalized and getting treated for the disease. The man was mentally unhinged for starters. But now he is unhinged on steroids. Literally. He’s on steroids. Dexamethasone is given to Covid patients who have a severe case of pneumonia from the virus. When steroids are prescribed for Covid pneumonia, the dosage is very high.  Normally the patient is expected to isolate for 20 days and isn’t the president of the United States. But Trump is on dexamethasone and refuses to fully self-isolate. He is eager to have some sort of rally as soon as this weekend even though that will expose countless people in his entourage and possibly the audience to the virus. He wants a big rally in Florida this Monday.

Trump wants us to believe he has shed the virus instead of being a man who is currently shedding the virus wherever he goes. It is ridiculous to think he is suddenly virus free just because he claims he feels great, tells us he must be immune, and has found the cure for Covid.  In his recent rambling commentary with Sean Hannity, Trump could be heard stifling coughs, sounding choked up, and clearing his throat. Trump has not appeared in person yet but he has been putting out propaganda videos to prove he is fine and dandy. His videographers are probably using something called “morph cut” to hide his coughing fits when they film him. Using that device, video content can be altered to appear to be almost seamless even though a video is cut and spliced. This tool can be used to hide a coughing fit. Morph cut is also used to create what are called “deep fakes.” What we are seeing in the carefully edited videos of this president are almost certainly falsified content that are intended to get us to believe he is healthier than he actually is.

People who get Covid can be affected mentally even without taking dexamethasone.  A psychological problem already in existence can be compounded both by Covid and by dexamethasone treatment. Steroids given in high doses can push a person teetering on the verge of mania to tip over into full blown mania.

We know Trump is always and forever covering up any negative information about himself.  In 2019 he was rushed to the hospital for what some have speculated was a heart problem. We have since learned that he forced his doctors at Walter Reed to sign NDAs so that he could keep his physical condition secret from the American people.  Trump’s most recent doctor at Walter Reed, Dr. Sean Conley, has been less than forthcoming with reporters about Trump’s physical condition. In response to reporters’ questions Conley has been doing a song and dance. When was Trump last tested for Covid? When was the last negative test or positive test? What was his viral load? What exactly was his oxygenation level? Conley would not say.  Whether or not he signed an NDA, he was not honest about Trump’s condition.

Consequently, we don’t know for sure how sick or how infectious Trump really was or currently is.  Given the timing of Trump’s hospitalization it is very possible that he was Covid positive when he went to the live debate with Biden. Dr. Vin Gupta, who has treated many Covid patients, was willing to say on MSNBC Friday morning that given what we do know about Trump’s oxygen levels below 94 and based on the course of treatment he has been given, Trump must have severe Covid pneumonia and consequently will still be shedding virus until the end of the month- for about 20 more days.

Has Trump tipped over the line into full blown mania? Mental instability? An “altered state” as Nancy Pelosi says?  Judge for yourself.

The 25th Amendment has serious limitations because it relies on a Vice President and cabinet to relieve an ailing president of his presidential duties even if he is a clear and present danger to himself and others, which could prompt a psychiatric intervention for anyone who is not the president. Nonetheless, today Nancy Pelosi announced a new bill designed to give Congress a role in assessing a president whose state of mind needs assessment by referring the matter to a panel of independent medical experts. Any attempt to use the 25th Amendment before this election would be seen as a coup, but I wonder if this device might be a prelude to a post election action to remove Trump. If Trump loses the election in a massive rebuke, the fear is that he will wreak havoc for about three more months until January 20th when Biden would be sworn in. He will be enraged and out of control during that time as our country would be facing an even greater eruption of Covid cases, deaths, and economic decline.

If the Republicans lose the Senate, which seems very possible given current polling numbers, the future of the Republican party will be in flux. Many Republicans in Congress will be trying to quickly disengage from Trump and Trumpism and do what they can to save their reputations in a post-Trump world. Many of them already despise Trump and would like to be free of his power over them. After the election it might be possible to finally get cabinet members and VP Pence to act independently in the best interest of not only the country but of their own political futures to at least threaten to remove Trump using the 25th Amendment as a cudgel if he doesn’t agree to leave office on his own. Pence could promise to pardon him and his crime family for their federal crimes if he will leave in peace. Of course Trump and his family would still face numerous state crimes emanating from the NY States Attorney, Cy Vance pursuing criminal charges, and the Attorney General’s office, Letitia James pursuing civil charges.

This shift might be quietly emerging even now. Mitch McConnell has said that he has not set foot in the White House since August because of the lax protocols when it comes to coronavirus. That statement is being heard by some as a subtle tell creating distance between himself and Trump. It is being taken as a sign that McConnell is giving Republicans the freedom to distance themselves from Trump if they are in tight Senate races. Some political analysts believe that McConnell sees the handwriting on the wall for his party. The GOP will be decimated. He is throwing all his weight behind radical right wing judge Amy Coney Barrett’s appointment as his last gasp to influence American politics for decades. McConnell is said to be throwing a Hail Mary pass to the end zone. He will do anything and everything to get this judge on the Supreme Court so that ultra conservative, wealthy interests, to whom he is deeply indebted, will continue to have power and influence even if the GOP has been mortally wounded by Trump (and by him).

What can we do as bit players in this tragic drama?  It is estimated that a million votes might be discounted in this election using a number of ploys to discredit our ballots. Voter suppression will be rampant because the Republicans don’t have the votes to win but they have dirty tricks galore. But if we rise up and vote in huge numbers to get Trump his Republican enablers out, we can overcome those dirty tricks with our sheer numbers. Our vote counts like never before in the history of our country. I think Americans know that. We are early voting in huge numbers, waiting in line for hours to vote. These are not all Trump lovers eager to vote for their cult leader. That group is not large enough to reelect Trump. These are Americans who are sick of Trump and furious at him for breaking America and want to have a country that works for them.

Biden and Harris are said to have an enthusiasm gap, but that’s not what I hear from many candidates who interface with Independent voters. The Independent voters make up 40% of the electorate and they are the deciders in every presidential election. They are breaking for Biden and Harris this time. Older Americans and women are leading the way. But Trump is also losing white low education men as well.  Our country is sick of Trump and this horror show he has subjected us to for the last 4 years.