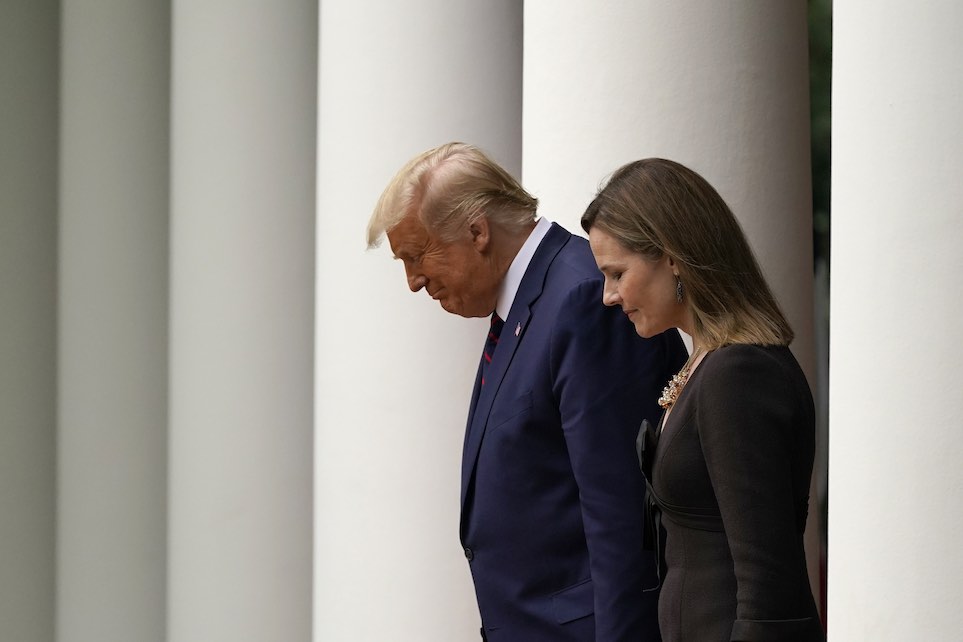 Republicans have been on a mission. Their mission has been to pack the federal courts with young, far right conservative/ libertarian judges to infuse right wing ideology across the board onto our legal system through their judicial decisions. These folks are appointed for life. Republicans Mitch McConnell and Lindsay Graham, who have the power in the Senate Judiciary committee, are the architects of this ultraconservative take over.

Mitch McConnell has been outrageously unfair to Democrats. He abused his power as Senate leader by creating a new rule that no new Supreme Court justice should be appointed in an election year but only applied the rule to Barack Obama 11 months out from an election. As the powerful Senate leader, he refused to allow Barack Obama’s choice for the Supreme Court, Merrick Garland, to get a hearing. Garland would have been a moderate voice on the Court.

After that, Trump got to install a right wing justice, Neil Gorsuch. Then Trump got to install Brett Kavanaugh. And now Trump is getting a third pick, Amy Coney Barrett, in what may well be the last gasp of his administration only a few days before an election that could make Trump a one term president based on current polling data. Gorsuch, Kavanaugh and Barrett, are all ultra conservatives. The ultimate insult is that Barrett is replacing an icon of liberal thinking, Ruth Bader Ginsburg, although Barrett is the antithesis of Ginsburg. She will most certainly curtail reproductive rights and other hard won human rights, and, based on her ideology, could decide to eliminate the Affordable Care Act throwing millions of Americans off their health care plans as well as possibly being a proponent for climate denial based on her testimony in the Senate confirmation hearing.

The Federal(ist) Society grows up alongside the Reagan Revolution. You have a small group of law students at elite law schools who are conservative and libertarian-leaning. [They believe] that conservative ideas and ideology are politically ascendant. And yet in their elite law schools, they don’t see those ideas represented in their curriculum. And so they decide that they need to found an organization, a club that would bring conservative and libertarian voices, scholars and perspectives into their law schools.

…one of their earliest faculty mentors that they brought in was Antonin Scalia.

A lot of Scalia’s ideas in writing about originalism and original meaning became deeply ingrained into the kind of founding consciousness of the Federal Society. And the organization really grew up as a organization that promoted Antonin Scalia’s conservative judicial philosophy. (NPR)

Amy Coney Barrett was one of Scalia’s clerks. She is someone the right wing can rely on to faithfully further conservative ideology on the Supreme Court for decades to come once she is installed. Mitch McConnell, Don Mc Ghan, and Lindsay Graham are part of a group of lawmakers and aides who have made a deal with the devil, Donald Trump, to get what they believe will be a lasting legacy of conservatism no matter how blue, how progressive, how liberal the majority of Americans want our country to be.

There are some nefarious heavy hitters behind this movement to the right. The Koch brothers and other ultraright wing ultra conservative monied interests are behind this effort. They have worked relentlessly over the past decades to inject the federal judiciary with these carefully vetted judges who will allow corporate interests to get the laws they want. Barrett is the crown jewel. She will get on the court before the election. She can be counted on to pull the court further right. Trump has openly said that he hopes she can be counted on to protect him if the election is close and the Supreme Court could decide the outcome in his favor. She might or might not do that. But she will most certainly and predictably protect the interests of rightwing ultra conservatives.

As America grapples with human rights for LGBTQ, asylum seekers, people of color, and women, issues of fairness, issues of reproductive rights, health care that is affordable for everyone, climate change issues and so much more, justices on the Supreme Court and the lower federal bench District and Appellate courts will be making crucial decisions that affect the lives of all Americans and the future direction of our country. The federal courts will be pulling our country to the right while the majority of Americans want to move further left.

The result will be that Americans will lose faith in the court system and believe that it has been politicized. And they will be right about that. It will have been politicized. American cynicism will become more entrenched. Even if Trump loses this election these federal judges will be his legacy. These judicial appointments are the reason  so many otherwise thoughtful, reasonable Republicans have held their collective noses and supported Trump.

What is the best way out of this misalignment?

There have been a number of suggestions made about how to remedy the ideological imbalance of the Supreme Court. So-called court packing (adding to the number of justices to sit on the court), could be done, but it will be viewed as a retaliatory ploy by Democrats to get back at Republicans. There is another idea for achieving balance on the Supreme Court that should appeal to Republicans and Democrats alike.

Northwestern University law professors Steven Calabresi and James Lindgren published in the Harvard Journal of Law and Public Policy in 2006. They argued for staggered 18-year terms, such that a vacancy would occur every two years, in nonelection years, giving each president two appointments per term.

Here is what they propose:

The professors’ proposal is simple: Every sitting president gets exactly two Supreme Court appointments during each four-year term. Once confirmed, each appointee would serve for a single, nonrenewable 18-year term on the Supreme Court. Every two years, a new justice comes in, and an old justice goes out.

Just think: No more existential death-matches on live television. No more fantasies of political domination, or nightmares of political extinction. And no more scenarios in which Republicans privately recognize the catastrophe of electing a psychopath game-show host—but feel compelled to vote for one anyway, because of the once-in-a-lifetime prize of the Court. After all, there’s always two seats up for grabs in the next election.

This proposal has another big benefit if Democrats want to achieve a measure of bipartisanship: It’s lead author, Calabresi, is a renowned conservative thinker—one of the early founders of the Federalist Society.