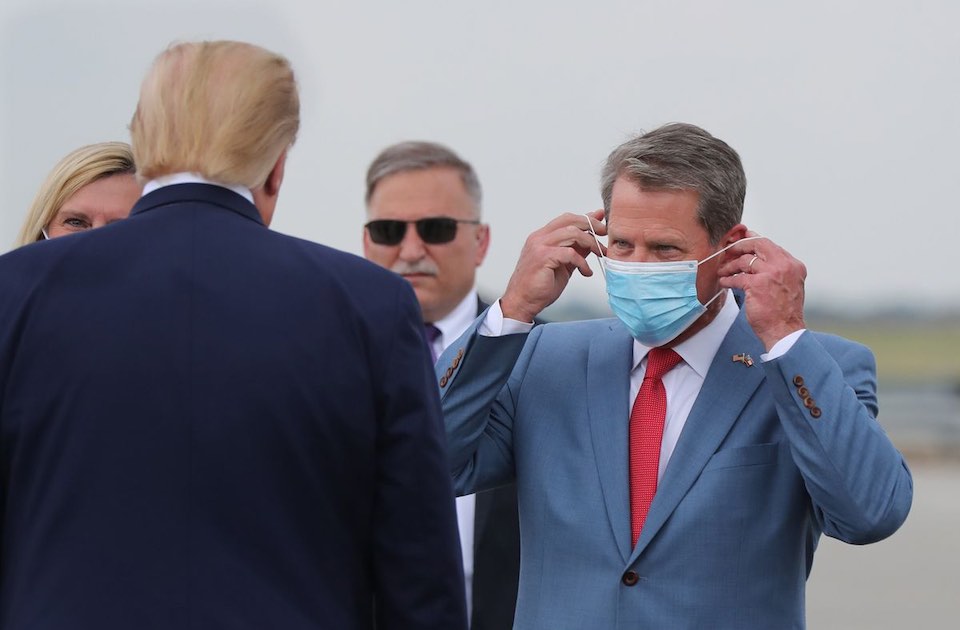 Trump has always been untethered to reality and what is left of the GOP, a once proud party with some degree of moral fiber, has joined Trump’s crazy, delusional world, a world where Trump won when he lost and Americans should surrender themselves to Covid-19 to achieve a bogus version of herd immunity no matter that some 3 million Americans would die as a result.

Trump is the leader of a party that is out to lunch. It is also out to maintain white supremacy at any cost and help the 1% get even richer. The hallmark of the current Republican Party is that it is an anti-democratic party. Rand Paul is an example of the thinking. Paul said when more people vote, Republicans lose. Guess what!? when more people vote that’s called democracy.

Who is a member of the Trumpian GOP? loyal Trump lawmakers, conservative media, Trump himself and voters who still call themselves Republicans: including an angry, aggrieved white supremacist base, many wealthy Republicans who benefited from Trump’s tax breaks for corporations and the 1%, and evangelicals who want to believe or do believe Trump is a gift from God and that he won the election in a landslide. This Trumpian echo chamber is either deluded or it is manipulating deluded people for its own benefit. The delusional reality that is pushed out has been retro fitted and altered to align with Trump’s own personal needs.

Trump lost this election by 7 million votes, but he will continue his pity party and the pretense that he won in order to delegitimize Biden’s presidency. What is left of the GOP are people who believe in a reality filtered through Trump. As long as these people choose to believe in the world according to Trump he will maintain power. But will he maintain power?

What Will Happen to Republican Lawmakers

From the sidelines, Trump will continue to insist that Republican lawmakers live inside his alternate facts world in which he won the election, forcing Republicans to choose between delusion and reality.  Even now that split screen is damaging Republicans because they are forced to say they believe Trump lost in a fair election over and over again, or they are forced to say they believe Trump is telling the truth about his fantasy victory. Either way they are between a rock and a hard place. These Republicans all must walk the plank because they never distanced themselves from Trump, never educated the base about Trump’s lies. They are like captives doing hostage videos and if they don’t toe the line they get attacked.

Georgia is a good example of what is in store. Republicans in the base who believe the election was stolen from Trump are furious about it. Even now they do not believe Trump lost. Who do they blame? Other REPUBLICANS who do not do more to support Trump. It is a sign of things to come that at a recent Republican rally in Georgia, rally goers shouted out their anger at Republican governor Brian Kemp, and Brad Raffensberger for failing to join the farce that the election was rigged and they should keep up the fight. “Stop the Steal!” they shouted.

It took less than 24 hours for the far right to trash Mitch McConnell for daring to break with the delusional world of Trump and get real by congratulating Biden and asking Republicans not to challenge the Electoral College result on January 5th. But the Trump GOP will continue to be at war with reality. This will put Republican lawmakers between a rock and a hard place over and over. They made this bed they are having to sleep in.

They say a house divided against itself cannot stand.  We are going to see a test case of that: how the GOP handles their divided house and whether it can still stand or will lose power as they engage in a circular firing squad attacking each other.

The Pandemic Misinformation- Weaponized Information Fed to the Base

One of the most consequential illustrations of Trump and Trumpism’s faith in factually inaccurate, and at times delusional thinking to serve Trump’s needs, has been the way Trump, Fox News, social media and other conservative media weaponized information about the pandemic to help Trump get what he wanted in the run up to the election. Trump thought that to win, he had to have rallies despite being superspreader events that would infect more Americans and cause many more deaths.

To support what he planned to do, Trump brought people into the administration who engaged in disinformation and misinformation, claiming that everyone should just go ahead and get infected- the more the merrier.

These people misrepresented the way to achieve herd immunity. Herd immunity is not simply allowing the virus to run rampant. It means using vaccines to immunize large numbers of Americans eventually getting up to 75% of the population vaccinated so that the virus would not have enough victims left to attack. That causes the virus to subside.

Paul Alexander, a Health and Human Services adviser until his departure this past fall, wrote to the head of the department on July 4: “We need to establish herd [immunity], and it only comes about allowing the non-high risk groups expose themselves to the virus. PERIOD. Infants, kids, teens, young people, young adults, middle aged with no conditions etc. have zero to little risk…so we use them to develop herd…we want them infected.” A few weeks later, he emailed Food and Drug Administration Commissioner Stephen Hahn and nine other officials to say: “[I]t may be that it will be best if we open up and flood the zone and let the kids and young folk get infected” in order to reach “natural immunity…natural exposure.”

Alexander fails to say that to get to the “herd immunity” he is talking about in the United States, close to 3 million people would be likely to die. He also does not recognize the reality that many people who get Covid-19 often have long lasting, debilitating after effects that include brain fog, trouble with their reproductive health, long term loss of taste and smell, lack of energy, and continued problems breathing, inability to do even simple tasks as well as other debilitating medical problems. He fails to mention that children and others who do not have symptoms can be carriers who bring the disease home with them.

Scott Atlas was another advisor Trump brought in to tell him what he wanted to hear. Atlas also pushed this bogus version of herd immunity and he claimed that masks did not work to prevent the spread of the virus.

Scott Atlas, who joined the White House in August as a science adviser, had tweeted “Masks work? NO,” and said widespread use of masks is not supported.

To support Trump’s wishes for rallies so he could win reelection, Trump also suppressed the CDC and kept it from providing accurate information.

As a direct result of these self-serving policies and pronouncements, our country has a lot of Republicans who aren’t cooperating with masks or distancing. We have been in a losing battle with Covid-19 thanks to Trump’s misinformation and the buy in of his misinformed Republican base.

There are over 300,000 deaths from Covid-19 in the US. The virus has become the leading cause of death in America.  Contrary to what Trump kept saying, that the virus would not even be talked about after the election, would disappear and is fake news, our country is facing a pandemic nightmare even while help is on the way. As the vaccine was rolled out across the country, giving hope to reality based thinking Americans, Trump was nowhere to be seen because he is still trying to keep up the delusional version of herd immunity as the right approach to Covid-19.

Trump is living in a delusional world but he is not the only one. His base is right there with him. And the question is what will happen with the GOP. I think that unless the Republicans do what they have not been able to do yet- shake loose from Donald Trump- they will be forced to be delusional or pretend to be and that will damage or destroy what’s left of this party.

What Will Happen As Trump Leaves?

Trump will do everything he can to make Biden’s life miserable as he leaves office. He might even conduct a mass firing of government workers so that when the new administration takes over no one is left there with institutional knowledge. Once out Trump will heckle Biden from the sidelines, and is likely to maintain some degree of influence over what has become a weak and cowed Republican party that could not stand up to its angry, misinformed electoral base or to Trump. We will see how many people continue to cling to Trump once the dust settles.

Will Trump Sustain Power Once He is Out?

Once out of office, I think Trump will lose influence. He will not have the massive power of the presidency behind him anymore. The group Trump will continue to lead is likely to consist mostly of disaffected white supremacists and Q’Anon followers- the hard core Trumpers.

If Biden can fulfill his campaign promises (which will depend to a great extent on whether the two Senate run off seats in Georgia can be won by the Democrats), the Biden administration is positioned to lead our country into a new era of diversity, a more multicultural America, and a far brighter, reality based future.