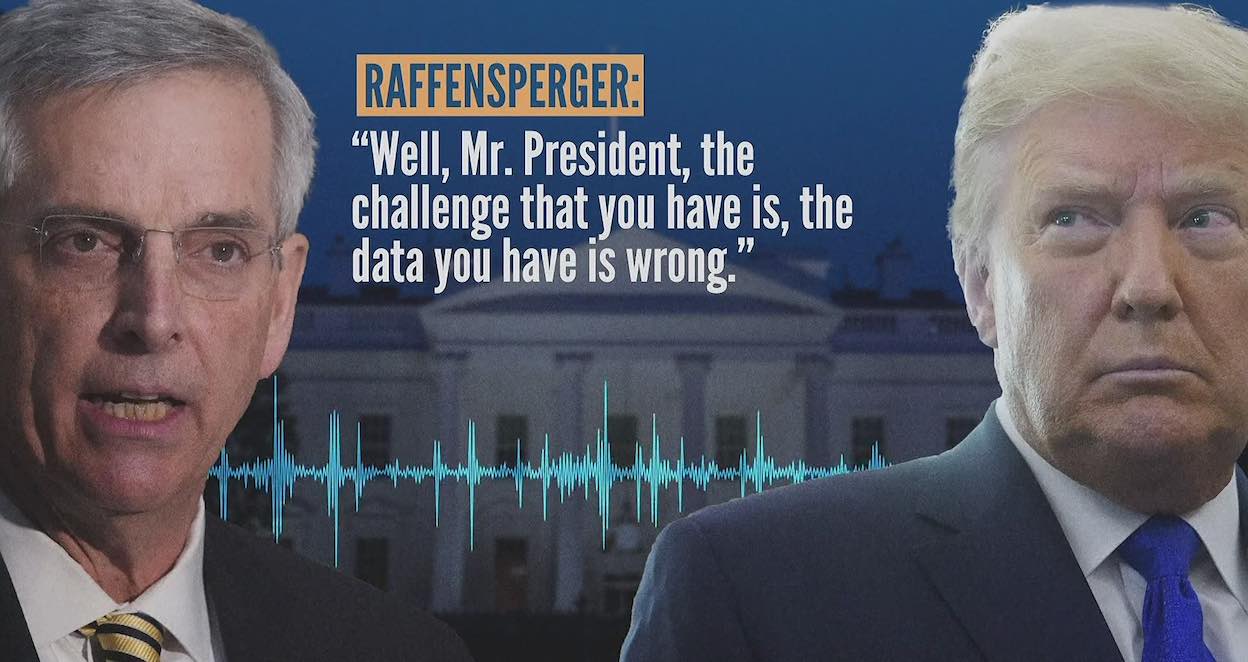 What Are the Facts?

Trump’s now infamous call to Brad Raffensperger, the Republican Secretary of State in Georgia, is all over cable news and social media. Throughout the hourlong call, which was taped by Raffensperger, we hear Trump shaking down the Georgia Secretary of State, repeating baseless claims and conspiracy theories that are being trafficked on the wildest crazy platforms of social media but have been debunked over and over again.

Georgia has had three recounts, a full signature audit, and litigation that would have uncovered election fraud if any existed that could have affected the final vote count in any significant way. We hear Raffensperger tell Trump the “data” he is relying on is wrong and try to set the record straight about the erroneous beliefs Trump is repeating. For example, Raffensperger tells Trump at one point that the claim that dead people voted was right but there were only two instances of that not hundreds as Trump alleges. Monday afternoon Gabriel Sterling, an election official in Georgia, went on air to debunk (again!) every single allegation of vote fraud raised by conspiracy mongers that Trump brought up in his hour-long taped call with Raffensperger.

Trump was obsessed by the need to talk to Raffensperger. He pushed his aides to call Brad Raffensperger 18 times before he finally got him on the line. Raffensperger, for his part, knew that Trump often lies about conversations he has had, so he had the Georgia general counsel on the call with him (as a prover) and he taped the call to be sure he had the evidence if Trump lied about the conversation they had. And lo and behold Trump did lie the next day via Twitter.  Here is Trump’s tweet:

I spoke to Secretary of State Brad Raffensperger yesterday about Fulton County and voter fraud in Georgia. He was unwilling, or unable, to answer questions such as the “ballots under table” scam, ballot destruction, out of state “voters”, dead voters, and more. He has no clue!

Respectfully, President Trump: What you’re saying is not true. The truth will come out https://twitter.com/realDonaldTrump/status/1345731043861659650

After that, the truth DID come out.

Raffensperger released the taped call to news outlets so that everyone could hear Trump’s pressure campaign and judge for themselves. Note that this tweet from Trump is after Raffensperger had already had the conversation with Trump trying to tell him the truth about what happened in the Georgia election. But Trump didn’t want to hear the truth, didn’t ask for more information or try to learn more about what Raffensburger was trying to tell him was the truth of the matter. Trump returned to his debunked conspiracy theories in his tweet.

What Did Trump Want of Raffensperger?

The call was taped by Raffensperger so that he doesn’t have to be the go-between to tell the public what Trump said. Instead, we hear Trump in his own voice and his own words asking this election official to “find” him the 11,780 votes he needs to win in Georgia. “People are angry,” Trump says. “There’s nothing wrong with saying you’ve recalculated.”

If Raffensperger “finds” those 11,780 votes for Trump that are not there in fact, in truth, in reality, he would be committing election fraud for which he could go to jail.  It’s a felony. In addition, Trump seems to threaten Raffensperger with potential criminal prosecution by saying he could be liable for a criminal offense for not reporting this false fraud Trump is telling him exists.

Since Trump is president and we have seen Attorney General, Bill Barr act as his lawyer fixer, even though Bill Barr has left the DOJ, we know Trump very well could push his new AG to bring charges against Raffensperger. He has done that before. So, Trump is threatening Raffensperger to get him to do what Trump wants him to do, namely, to help him cheat to win in Georgia after he lost that state to Joe Biden. That sure sounds like extortion.

Trump’s acts and comments are most certainly grounds for potential indictment for wire fraud (use of the phone to commit the crime), and solicitation to commit election fraud. These are crimes under Georgia law and federal law. Under Georgia law “It’s a crime to solicit election fraud, and asking the secretary to change the votes is a textbook definition of election fraud.” Trump was very clearly attempting to get the Georgia Secretary of State to “find” him votes he needed to win which would disenfranchise thousands of voters in Georgia. That is obviously what Trump is up to here.  There are two other people on the call with Trump who should be worried: Mark Meadows and a GOP lawyer who should have known better, Cleta Mitchell. We hear their comments on the tape recording as well, urging Raffensperger to commit election fraud. They sure sound like coconspirators here.

But Did Trump Break the Law?

In our system of criminal law, a criminal must have the right mental state, intent or mens rea to be guilty of a crime. The state of mind of a defendant really matters. When you hear commentators on CNN or other platforms expressing uncertainty about whether Trump is guilty of election fraud, that is the reason. What is/was Trump’s state of mind?  Does he not know he lost the election? Does he really believe he won it? Is he willfully blind or ignoring the truth?

Trump’s best defense to criminal election fraud here would be that he is crazy, delusional, or psychotic. Why? Because if that were the case, he would be unable to tell reality from fiction. His criminality in this case will be determined by an assessment of his mental state or mens rea.

If Trump really really believes he won the election in Georgia, then he would not be guilty of these crimes because his intention would be to try to correct an incorrect result- to set the record straight. If Trump really really believes these conspiracy theories, he might not have the necessary mens rea to be guilty. Is Trump crazy like a fox (calculating) or crazy like a crazy person (unable to tell truth from lies)? That question has bedeviled people since Trump took office.

So, How Can We Tell Trump’s State of Mind?

There are some things we already know about Trump’s psychology that help us. If we understand Trump’s psychology, it opens the door to understanding his state of mind. We already know a lot about how Trump thinks. For starters, we know Trump is obsessing about his loss in the 2020 election. We know he fears being indicted when he leaves office.  He knows he lost to Joe Biden.

We also know a lot from many tell all books written by people who know him well and have personally interacted or worked with him over time: Michael Cohen, Mary Trump, Bob Woodward, Michael Wolff, Tony Schwartz, and Omarosa. We know that Trump talks and thinks like a mob boss. Michael Cohen tells us that Trump conveys his wishes and needs in a kind of code-like innuendo. We hear him doing that on the taped call.

We know from all of these writers who have been in the room with Trump that he is obsessed with one thing- winning. He must win. He does not care at all if he cheats to win because winning is everything to him. That was how he was raised to think by his father and that is how he continued to think as he pretended to be a successful businessman when he was not. And that is how he continued to act as president.

In addition, we know how he thinks from the impeachment trial testimony and from his behavior during the campaign to win in 2016 by encouraging Russian interference and from the Mueller Report: Trump does not care about violating the law. He acts and thinks about what is best for him without regard to the law.

We already know Trump’s state of mind because we have lived with Trump for the last four years. Michael Cohen put it best in his book, Disloyal. Cohen tells the story about how he got into a lawyer-fixer relationship with Trump, doing his bidding even when it was illegal, nasty, or underhanded. Cohen and others describe the way Trump functions.

What Cohen tells us is that Trump DOES know the reality but if it is a negative or damaging reality for him, he rewrites it to be better for himself and then he incessantly and obsessively pushes and pushes that false reality out insisting and forcing everyone in his orbit to buy into the alternate reality or suffer negative consequences. He is, in other words, crazy like a fox who understands the way to use disinformation to gain and maintain power.

Early in his presidency we heard Kelly Ann Conway try to bend reality to fit “alternate facts” forced on her by Trump. Sean Spicer was forced by Trump to claim that Trump’s inauguration was far larger than Barack Obama’s.  These past four years have been evidence of Trump pushing his rewritten version of reality on the American people over and over again. We do know Trump’s state of mind.  Trump DOES know the truth. He just refuses to accept it when he does not like the truth. He insists we live in the world according to Trump and his supporters, sycophants and followers have tacitly bought into that.

One of the most telling pieces of information we have about Trump’s state of mind is that he knows exactly the number of votes he needs to have to get Georgia into his win column: 11, 780 is the magic number. He would win Georgia by only one vote, but what the heck! a win is a win. Why is it important that Trump pushes Raffensperger to “find” that specific number of votes? Because it goes to Trump’s understanding of reality, facts and truth. Trump is well aware of the exact number of votes he needs to win. He is not so delusional or out of it that he does not grasp that reality. Trump is a master manipulator of people who want to believe in him and in conspiracies out of fear of change. He knows how they think. He plays to this crowd and they return the favor by slavishly buying everything he is selling them.

Mob bosses know how to protect themselves from criminal prosecution. They get others to carry out their illegal wishes and they speak in code and innuendo to convey their demands so that they can have a high level of deniability. Trump as a mob boss is particularly dangerous because he has been granted so much power in his role as president. Trump poses the greatest national security threat to America that our country has ever seen from a president.

In short, Trump knows the truth, but he refuses to accept it unless it works for him. Trump demands that everyone accept HIS altered reality as OUR truth, rejecting facts and the real world, or risk punishment for refusing to believe in the world according to Trump. 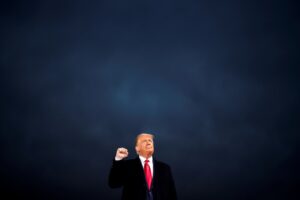 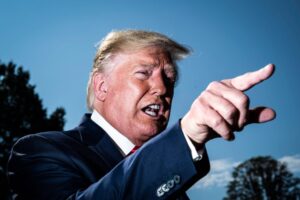