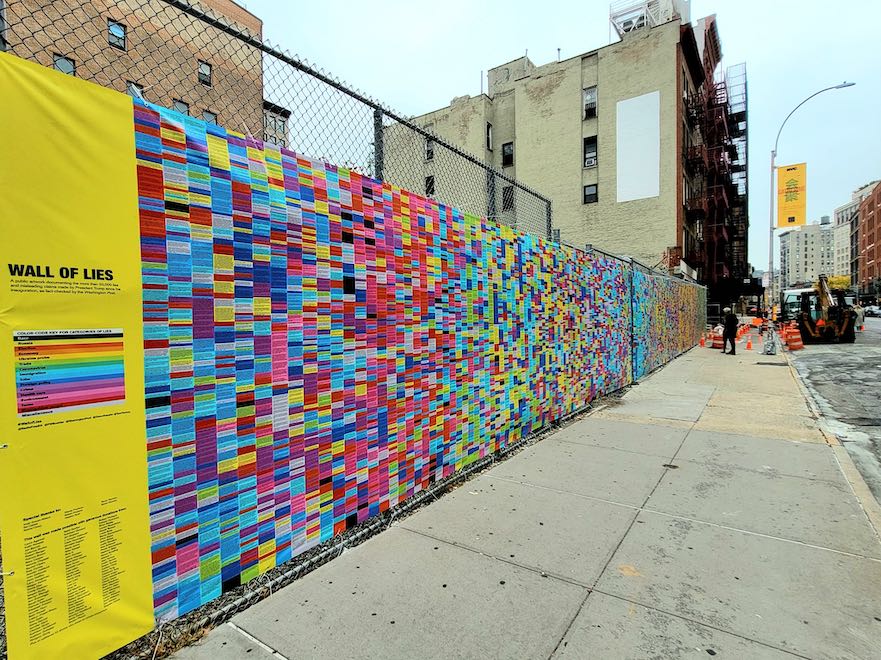 Dr. Fauci looks like a new man since Biden was elected. He looks relieved. And why wouldn’t he be? He is no longer being forced against his will to support a politicized, unscientific anti-factual approach to dealing with the pandemic.  Over time, as Fauci tried to stifle or limit what he said to be loyal enough to Trump to avoid being fired, but get out enough of the truth to Americans, he began to look like a hostage in a hostage video. Now that Biden is president, a relieved Dr. Fauci has appeared on multiple networks including, MSNBC’s Rachel Maddow Show. Maddow had been trying to get Dr. Fauci on her show since March of last year, but, as Fauci reported Friday night when he finally appeared on her show, the Trump administration blocked him from appearing on MSNBC because it was of the wrong political stripe. That was another way to suppress the truth. Muzzle Dr. Fauci.

Throughout his time in office, Trump routinely micromanaged, blocked and put pressure on people to distort and lie about the truth in order to foster an alternate reality that he thought was better for him. The image you see here for this blog was the mural that came out in October documenting Trump’s 20,000 lies. The lying got worse as the end of his presidency neared. The final lie count was 30,573 false or misleading claims according to Glen Kessler.

When it came to the pandemic, Trump claimed that testing for Covid-19 was bad because if you test you “find more cases”. Trump had decided that hiding the rising numbers of Covid-19 cases made him look better because, he thought, the numbers reported would be lower. Mask wearing was another issue that resulted in a dishonest message with Fauci and other epidemiologists urging masks and Trump defying the need to wear them. Fauci knew that to get a grip on the pandemic, testing and mask wearing was crucial, but he was not supposed to say these things that ran counter to the Trump version of reality. Trump’s reality was repeated over and over to his base.

Of course the truth was undeniable over time, because as cases were rising we saw skyrocketing increases in hospitalizations and deaths from complications from Covid-19. The truth came out after all.

But our country is left with a divided approach to the pandemic depending on one’s political party. Misinformation from the GOP has caused our country to lag behind other countries in our testing, our ability to beat back the spread of Covid-19, and when it comes to death rates, our country has the worst record of any country. PR and marketing approaches, disinformation and misinformation have kept Trump’s base uninformed yet certain they are right, even when they are not. Suppressing the truth and trying to maintain the Big Lie about who won the election was the driving reason for the mob attack on Congress.

Biden is the new sheriff in town now. He has instructed his pandemic team to be open, honest, and transparent. Science will speak. If a mistake has been made, it will be exposed and fixed. Fauci called that “refreshing”.

It is more than that. Honesty is the backbone of a viable democracy. If we don’t start with reality, facts, and evidence, we cannot hope to have a democracy that will survive the test of time.

As a former Assistant US Attorney, I understood that my job was to get to the truth: to learn, study, understand and seek the facts about what had happened in an incident or series of incidents where there could be criminal conduct involved. Who had done what? When did they do it? What did they know and when did they know it? Sometimes in the process of preparing a case, evidence is uncovered or revealed that does not align with your theory of the case. Things in life can be messy and complicated. Your theory might need to change as you learn more. There were times that the case needed to be dismissed for lack of evidence. But the goal, as our office saw it, was always to pursue the truth and follow the facts without trying to shade, ignore, sugar-coat or deny anything that was revealed in the process. That should be the approach all of our political leaders take in this country.

When upsetting events happen, Americans turn to their news sources of choice to learn how to think about it. But news sources on the right are tainted by politicization. All too often the Republican Party in concert with the conservative media eco-system (Fox News, OAN, Sinclair, and conservative talk radio) works hand in glove to maintain control over the message for political purposes. Truth is distorted to keep a grip on GOP voters. Maintaining power is the ultimate goal.

Even now Fox News is trying to hold onto its viewers by removing more reliable reporters on the news side with more incendiary hosts like Hannity and Ingraham to stem the tide of Trump supporters who are flocking to OAN and Newsmax, even farther right platforms.

Fox gave voice to discredited conspiracy theories, which had surfaced in far-right social media circles in the hours before. Hosts Sean Hannity, Laura Ingraham, Lou Dobbs, and several guests referenced “reports” that Antifa—the term for an unorganized movement of antifascist political activists—had embedded covert agents to instigate the insurrection. In truth, many of the rioters were well-known white supremacists, neo-Nazis, and QAnon conspiracy theorists, who did not take steps to conceal their identities. There is no evidence the rioters were infiltrated or encouraged by anyone with other motives. (Quartz)

Conservative media is already dissing and bashing Biden. They claim Biden is a radical, is weak and frail, is “ramming” lefty ideas and socialism “down your throats.” This is not true. Biden is trying to unite the country and find common ground. He is being portrayed as a threat to keep America polarized.

I am not saying that Democrats don’t dissemble sometimes too. They do. But they are more likely to feel ashamed and correct the record when they learn they are wrong. When Trump Republicans are exposed, they double down and defy the truth. Take Kevin McCarthy (House Minority leader), for example. At first he said (honestly) that Trump incited the mob that attacked the Capitol. But now he is saying Trump encouraged people to be peaceful (not true- he explicitly told the group to fight or lose their country) and that somehow everyone is to blame. Huh!?

For four long years Trump and his allies have insulated a large portion of the country from honesty, facts and truth. An alternate reality was aggressively pushed out by White House communications teams: Kellyanne Conway, Sean Spicer, Sarah Sanders, Kayleigh Mc Enany and others. By the end of Trump’s term, almost everyone remaining around him was loyal to the Trumpian version of reality or had been removed. Most House Republicans are still living inside the Trump alternate universe along with Trump’s base. They say their base forces them to remain loyal to Trump’s version of reality.

Maybe these guys need to take a lesson from the senior leaders at the Dept of Justice.

On Friday night, January 22, the New York Times broke yet another story that exposes how desperate and corrupt Trump was in his effort to stay in power by attacking the truth and trying to reshape reality.

When AG Bill Barr resigned from the DOJ he left Jeffrey Rosen in charge as Acting Attorney General. Trump was desperate to get Georgia, somehow, some way, to redo their election result even though the ballots had been counted and recounted three times, each time with the same result–Biden won. That should have been the end of the story. That was the truth of the matter.

But no. Trump continued to push his false claim over and over again that he had won when he lost. He engaged in a multi-pronged pressure campaign to undo the election he lost. Trump’s “Big Lie” was the underlying motivation for the un-American mob attack on Congress and for Trump’s second impeachment in the House by the Democrats and 10 Republicans.

We have learned that Trump found an ally at the Department of Justice, an “unassuming lawyer” by the name of Jeffrey Clark, head of the Civil Division. Clark had been “devising ways to cast doubt on the election results and to bolster Mr. Trump’s continuing legal battles and the pressure on Georgia politicians.”  Clark was willing to help Trump pursue his baseless claims.

Clark began pressuring Rosen and others to do more on voter fraud — such as holding a news conference to announce they were investigating serious allegations, or taking particular steps in Georgia — though Rosen refused. At some point, Rosen was informed Clark would replace him, and he pushed for a meeting with Trump in person, the people said. It was theoretically possible that, if Clark were installed, he could push for some type of challenge to the election results. (Washington Post)

Rosen and Clark went to the White House and presented their arguments to Trump almost as if they were on an episode of “The Apprentice,” according to the NYT report.

At the same time, something very important happened at the DOJ.

The remaining senior leaders at the DOJ banded together and agreed that if Rosen were replaced with Clark they would all resign en masse. That strong stance against Trump’s pressure was powerful. Trump was forced to back down, keep Rosen on as the Acting AG and give up his pressure campaign inside the DOJ to overturn the Georgia election.  More of this evidence will come out in the impeachment trial in the Senate.

Republicans Should Push Back Against Disinformation to Support Democracy

You have to wonder why other people in executive roles in Trump’s administration and lawmakers in Congress pressured by Trump and conservative media to tell lies to the Republican base instead of the truth, be loyal instead of independent, did not stand up to him all together, en masse, the way DOJ senior leaders did.  And how about the many Republicans in the House who say off the record that they wanted to vote to impeach Trump because they know the truth about the un-American insurrection he fomented, but wimped out out of fear of being bad mouthed by their party and base?

Hey you guys, what about standing up en masse to educate your duped base instead of caving in?  Just tell your constituents the truth:

Is that really so hard to do?

Our democracy needs you to stop the disinformation and defend the truth. Trump is banned from Twitter. Now’s your big chance.