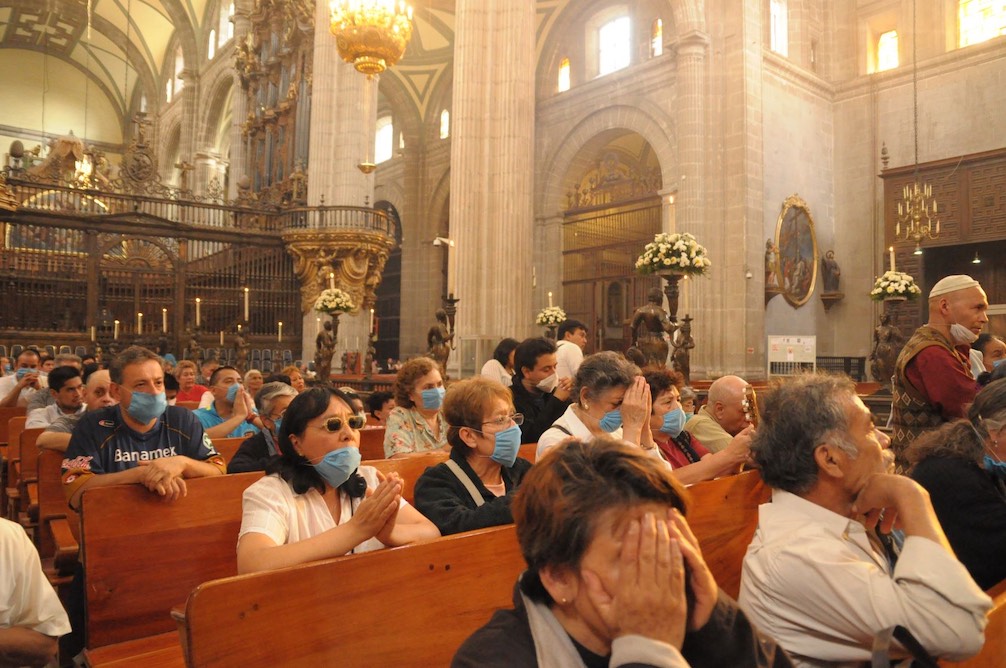 As everyone knows God works His (Her/They/Their/Them) wonders in many ways.  Could it be the pandemic was and still is one of those wonders?

It used to be that God would try to communicate with earthlings through things like burning bushes, as He did with Moses, speaking to him in an Egyptian desert from a burning bush. But there are acres and acres of burning bushes and trees right now in the American Northwest and across the world thanks to climate change, and no one has reported picking up any messages from the Almighty… at least not yet.

And what would that message be? Hmm…how about:

We all have to work TOGETHER and CARE about each other!

It’s not ok to be all about your selfish little self!

Wasn’t that the big message from Jesus lo these many years ago? Do Unto Others As You Would Have Them Do Unto You.

You have to wonder if Donald Trump and his cohort of self-centered, greedy, me first people hell bent on amassing power to direct outcomes in the world was sent to us by the Antichrist just in time for the Second Coming which seems to be right around the corner if we don’t do something fast to defeat Republicans in this country and get Democrats in charge.

The United Nations has just published a new, terrifying report about climate change.

Nations have delayed curbing their fossil-fuel emissions for so long that they can no longer stop global warming from intensifying over the next 30 years, though there is still a short window to prevent the most harrowing future, a major new United Nations scientific report has concluded.

Humans have already heated the planet by roughly 1.1 degrees Celsius, or 2 degrees Fahrenheit, since the 19th century, largely by burning coal, oil and gas for energy. And the consequences can be felt across the globe: This summer alone, blistering heat waves have killed hundreds of people in the United States and Canada, floods have devastated Germany and China, and wildfires have raged out of control in Siberia, Turkey and Greece.

But that’s only the beginning, according to the report, issued on Monday by the Intergovernmental Panel on Climate Change, a body of scientists convened by the United Nations. Even if nations started sharply cutting emissions today, total global warming is likely to rise around 1.5 degrees Celsius within the next two decades, a hotter future that is now essentially locked in.

According to the UN report there are still paths we could take as a world that would lessen the disaster. But we would have to work together to achieve them. (Hey, isn’t that another clear message from You Know Who?)

Climate change is no longer just a possibility. It is an inevitability. The ultra rich purveyors of mis and disinformation who have protected and promoted the interests of the fossil fuel industry have succeeded in messing up the world for human life. Full stop. Although the United Nations report also spells out what we can still do to diminish the impact, the wreckage is happening before our eyes. We disregard what we need to do NOW at our peril and that of our children and grandchildren and the future of mankind.

What Else Did Republicans Mess Up?

Republicans in this country, thanks especially to the leadership of Donald Trump, have become a death cult on a major suicide mission against humanity: a group of people who are all about putting themselves first and asserting their rights to do that–everyone else be damned.

The Republican Party has become a party that is not out for the common good but only for the good of themselves, a party that craves power and will do anything to get it and keep it, including lying, cheating and stealing to “win” elections. They are setting up a return to power for Donald Trump. And if they succeed, they will also be ruining the world for themselves as well as the rest of us. Imagine a world that does not do anything to combat climate change or listen to science, denies what is true and factual in favor of an alternate mythical reality brought to you by a con artist salesman in a suit and extra long tie? The world we will get with Republicans in charge of America again is a world that will monumentally fail.

Is God trying to warn us?

We know God is not above smiting. He smites a lot when He feels the need to send a message to earthlings who are not doing what they should be doing. And everyone knows that God knows All.  So of course He sent Covid. But Why?! Is He is trying to tell us something? What is He trying to say?  Or at this point, is an exasperated God throwing caution to the wind and just asserting Himself with these stupid humans because too many people (ie Republican people) have gone astray? Is God taking action now in a way He has had to do sometimes in the past when mankind was going off the deep end, erring way too much and being stubborn cusses about it?

People who listened to Donald Trump and conservative media are not getting vaccinated despite the abundant availability of the vaccine in every part of the country thanks to the efforts of the Biden administration. These anti-vaxxers are Republicans. 70% of those who say they will not get vaccinated as the Delta variant rages in our country are Republicans. Many live in Republican run southern states with governors who dissed masks and social distancing, and attacked Dr. Fauci for telling us the truth. They listened instead to people like Ron DeSantis, Florida’s governor, who has gone so far as to ban mandates in his state and forbidden local mayors from protecting their citizens. Other red state governors are being equally stupid: Iowa, Texas and others are taking a stand against common sense ways to protect people from getting this virus.

Republicans opposed to the vaccine are saying things like “I’ll take my chances.” “I’m independent” “I’m healthy so I won’t get it.” “If it’s my time then it’s my time.” CNN is (finally!) interviewing people with Covid in hospitals hooked up to oxygen who didn’t get vaccinated and can hardly breathe who are telling people to get the vaccine and stop being closeminded idiots about it. If those first person video accounts don’t change the minds of Republican denialists nothing will.

If anyone is opposed to the vaccine at this point, there is probably no reasoning with them. They drank the Kool Aid conservative media and Donald Trump served up in a tall glass of White Supremacy with a swizzle stick. If they are not willing to rethink their pandemic denialism now, they now risk their own preventable death or long haul Covid symptoms. Their refusal to accept science could ruin their lives and the lives of those around them they WILL infect.

While other states like Vermont, which has a very high vaccination rate of 70%, will open up businesses and be successful as the school year begins. Their kids will get to go back to school and not fall behind in their formative education.

Covid Caused Remote Workers to Move to Southern States Where Their Votes Could Save Democracy…or Was it God’s Will?

If you can’t sleep at night because of what Republicans are doing to ruin our country, Tom Rogers wrote a Newsweek article that is worth reading: https://www.newsweek.com/make-our-politics-work-remote-work-may-work-opinion-1617042

The problem with our country is that we do not have a one person one vote democracy. Instead, it turns out that 30 states are Republican led and only 18 are led by Democrats. The Democratic states, together, represent a larger population with less power to dictate the agenda for the country. Underrepresented Democrats =41 million people. That has led to the will of the majority, which supports largely Democratic, more progressive ideals, to be forced to live in a country where the minority (GOP) gets to create the laws and rules everyone including the rest of the world must play by. Tyranny of the minority. Blue states have an overabundance of progressive voters who do not get a government they want when Republicans are in charge. (There are some Republicans who do not follow the dictates of Trump and Trumpism, but they get viciously attacked for that.)

Covid has changed something fundamental, however, that just might tilt the scales in favor of the Democrats. Because of the pandemic there has been a migration of politically progressive people from blue states to battleground and red states that have better weather and provide a good lifestyle with a lower cost of living. The pandemic forced remote work to become mainstream. The result may be an epiphany. Companies may be learning that working remotely DOES work well and workers may be hoping that these exurban areas could become their permanent residences where they continue to work remotely .

Could that blue pandemic migration overcome the imbalance in voting power of the red and battleground state electoral map?

Companies Could Be the Answer to Saving Democracy

What if companies permit remote workers to continue to reside remotely? Could those people who left Silicon Valley and other blue areas of the country, physically moving their residence to Texas, and Florida and Georgia and Utah as well as other purple states make the difference in elections? If they could continue to reside in these states would their numbers overcome the current Republican advantage in key battleground states?

Tom Rogers’ article does not directly answer this question. Instead he suggests that companies could help our democracy by allowing workers to volunteer to change their residences to battleground states as a way to help our democracy survive Trump and Trumpism. What I wonder is whether the moves already made by progressives to battleground states might already have shifted the balance. If so, the only thing CEOs would need to do is to allow their remote workers to keep their jobs and establish residency in their new states.

Then there is the question of whether CEOs would allow their workers to reside remotely with awareness of the political ramifications.  Tom Rogers thinks so. This would be a way CEOs could act without being overtly political, (which they would prefer not to do because that would result in the Republican outrage machine targeting them). Companies that permit remote workers to reside in battleground states could literally save our democracy from crashing and burning given the overwhelming voter advantage that would result for the Dems in the key battleground states at risk because of newly passed voter subversion laws.

Was it God’s Will?

Did God send the pandemic to teach Republicans a lesson?

Well…maybe.  You be the judge.

Of course we ALL have to live in a world where Republicans are failing to rise to the occasion when it comes to climate change and the response to Covid.  That’s the bad news. If Republicans don’t learn this lesson we are all at risk.