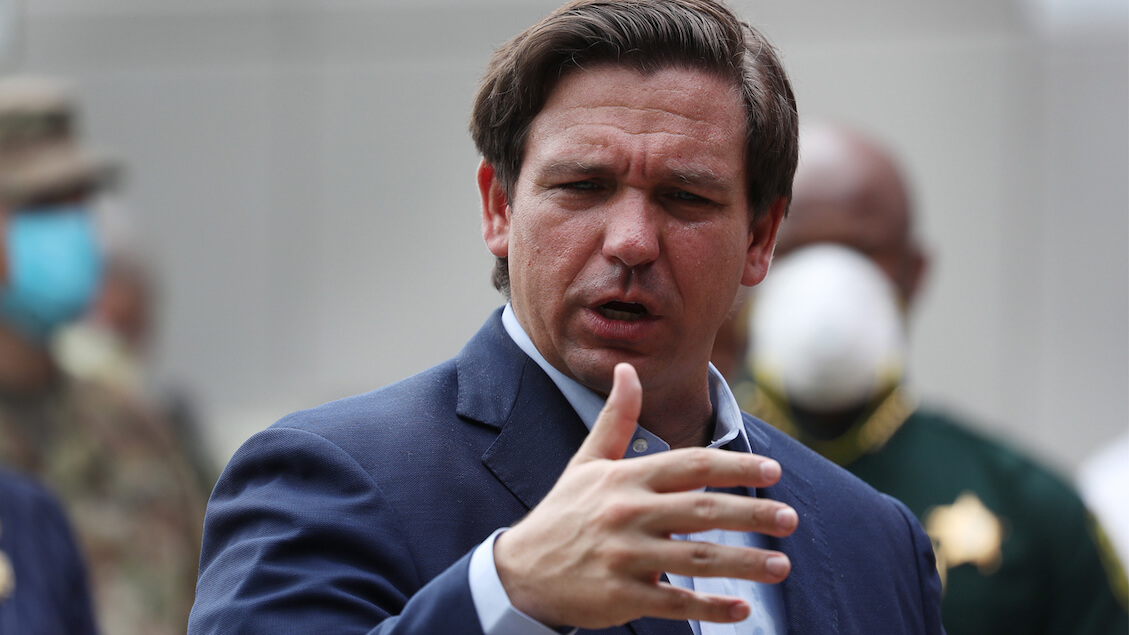 On July 30th, DeSantis signed an executive order to block school districts from imposing mask mandates as the Delta variant swept through the state. The order was challenged by multiple lawsuits, and as cases continued to rise, including among young people, school districts began to defy it. This prompted the DeSantis administration to threaten to strip funding if the districts did not remove their mandates. On Friday, the Florida Department of Education informed the school boards in Alachua and Broward Counties, which voted to impose mandates, that it “will begin to withhold from state funds, on a monthly basis, an amount equal to 1/12 of the total annual compensation of the school board members who voted to impose the unlawful mask mandates until each district demonstrates compliance.” [Rolling Stone August 26, 2021]

The state is experiencing its worst surge of the pandemic. Last week, it was averaging nearly 25,000 new cases every day. The previous high, in January, was about 18,000. More than 17,000 Floridians are hospitalized with Covid-19, another record; around 230 people are dying every day. Florida leads all states in the number of hospitalizations and deaths per capita.

The federal government has vowed to make up the funding difference in districts that defy DeSantis.

What in the World is Going On With Republicans?

It is nothing short of amazing that a governor would do everything in his power to prevent a life saving public health measure (wearing masks) from being enforced as his state becomes the worldwide epicenter of the pandemic, especially since children are unable to get vaccinated yet and are returning to school. Children are showing up in emergency rooms and needing ICU beds in high numbers because of the Delta variant. DeSantis and some other Republican governors seem to be determined to ensure that the people who elected them and their offspring have the maximum opportunity to get sick and die. We used to elect governors as our leaders with the expectation that they would protect us and help us stay safe when disaster strikes.  What in the heck happened to that idea?

I think it’s strange that conservative media isn’t out to conserve the lives of the people who are viewers. Hannity and others are now telling viewers to use ivermectin, used for deworming horses and cattle, as a treatment for Covid. Viewers are taking this junk, poisoning themselves and ending up in hospitals. Here we have the most effective preventative against Covid: namely, vaccines that really work great and have minimal side effects, and these conservative carnival barkers are selling viewers on something that could kill them.

Freedom to Die With Your Rights On

The idea that people living in a society should have the total freedom, the absolute right to do anything they please including defying public health measures meant to help to save the lives of people living in their communities, is the epitome of selfishness. It also smacks of Ayn Rand Libertarian ideology: people are supposed to pull themselves up by the bootstraps but not supported to get to the first rung and if they don’t make it up the ladder that’s because they are lesser beings. States run by governors who believe that government is not there to help you, end up like Texas, a state that might have low taxes, but it also has a power grid that is nonfunctional under stress when you need it the most. If there is a snow storm in Texas and the power grid fails, it’s YOUR problem to survive.

GOP Governors Respond to The Stupidity of Their Base

When it comes to vaccines and mask mandates meant to protect everyone, how is it that Republican governors who know better can still command high approval ratings from their constituents?  It seems the answer is that they are doing what their Republican constituents want them to do.

Trump found out he was out of step with the monster he helped to create when he went to Alabama for a rally last week. He told the crowd that they should get a vaccine. He had gotten one. What happened? He was booed by the crowd.

In short, GOP governors and other Republican leaders who know better are appealing to a base that doesn’t and refuses to listen.

Seven GOP Governors On the Wrong Side of History

There are six governors currently working against the survival of their constituents by downplaying the pandemic or banning mask mandates: Doug Ducey of Arizona, Kim Reynolds of Iowa, Pete Ricketts of Nebraska, Greg Abbott of Texas, Ron DeSantis of Florida, and Brian Kemp of Georgia.

In the last two weeks, new cases of Covid-19 across the U.S. have jumped 145% and hospitalizations 70%. All five of the Republican-controlled states above have fewer than 50% of their population fully vaccinated against Covid-19, according to data collated by the New York Times. In Idaho, the sixth-least-vaccinated state in the country, just 37% of people have received both vaccine doses. This is far short of the high levels experts believe may be needed to achieve herd immunity and stop the virus spreading, though some believe reaching this threshold may no longer be possible. These Republican states are also struggling to contain new outbreaks of the virus: When accounting for population, Florida is the second-worst state and Texas the 10th. Florida also has the second-highest level of hospitalization due to Covid-19. Texas is eighth and Arizona 13th.   [Forbes]

As Covid cases rise, people living in Republican led states are forced to come up against the reality they are denying and defying. Their first amendment war cry might be: “Give me freedom or give me death!”. But your first amendment rights are meaningless when you ARE dead.

What if Trump and the Republicans who think like him had celebrated Operation Warp Speed as a Trump success and embraced masks and social distancing? How different would it be in this country at this point with the Delta variant upending the start of the school year and sickness and death rising in the fourth wave of coronavirus to hit this country? If Republicans had been on board with public health measures instead of purveyors of mis and dis information, our country might have beaten Covid by now.

Why didn’t that happen?  If you remember back to the start of the pandemic, Trump was trying to minimize it and masks were a constant reminder of the pandemic. Trump was all about a stock market that was the biggest and best ever which would be proof that he should be reelected. His denialism lost him the election and set our country on the inane path we are struggling to overcome now: vaccine disinformation and resistance.

If Republicans had been on board with public health measures instead of purveyors of mis and dis information, our country would have been in a far better place at this point. We could have defanged the virus: kept it from overwhelming our hospital systems, decimating hospital staff, and killing so many people including children. But Republicans weren’t on board and they still aren’t. The virus, however, doesn’t care how you vote. It’s stalking anyone who hasn’t gotten a vaccine yet. High death rate numbers might result in a change of heart in some diehard Republicans who think they aren’t free enough. In fact we are seeing a hopeful rise in vaccination rates since Pfizer’s vaccine got full approval from the FDA.

Where is the backlash against Republican governors like DeSantis, Abbott, and others who are leading their constituents to the precipice to jump off like lemmings to the sea?  It may be emerging in Florida.

Crist, a Democratic Congressman and former Republican Governor running for his old job, leads 57% to DeSantis’ 43% in a head-to-head matchup.

Ron Deathsantis is up for reelection in 2022. If he doesn’t change his tune, he might be out of a job and out of a shot at the presidency in 2024. He cannot win again as governor without the support of Democrats and Independents as well as Republicans. The crazy Trump base is not big enough to assure him victory.

Update: Leon County Second Circuit Court Judge John Cooper ruled today, Friday, August 27th, that DeSantis’ ban on masks in schools was overreach. In his ruling the judge said that parents rights are “very important” but they are subject to reasonable limitations to protect the rights of others.  He spoke about the rights of individuals to drink liquor if they are over 21. But that does not give anyone the right to drive drunk. The case will be appealed.

War Against Democracy in the Shadows