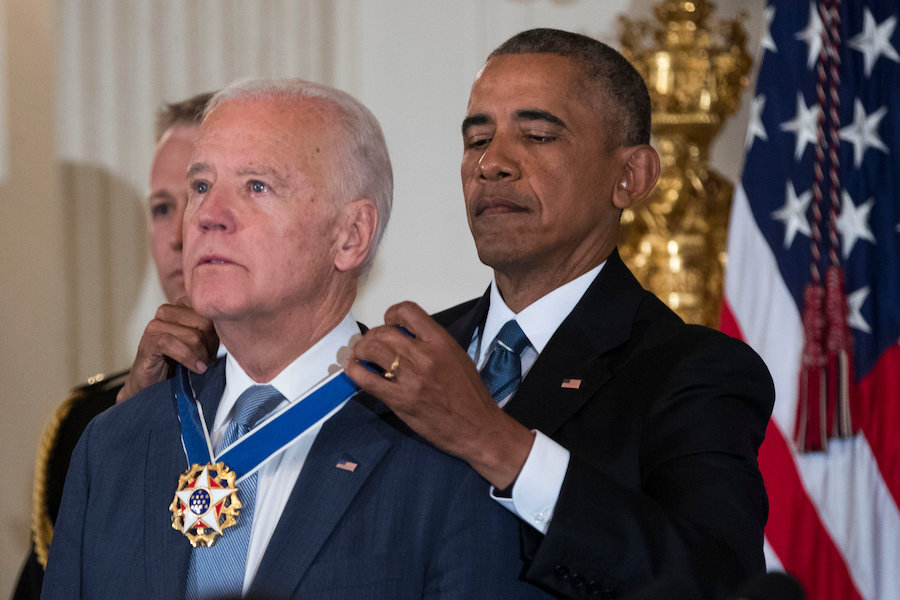 Joe Biden announced his candidacy and shot up in the polls.  He surged 9 points – up to 38%- in one day.  Warren also surged up 8 pts.  Bernie Sanders lost ground.  Much of Biden’s support came from black women.  Yes, I know it is early in the race for the Democratic nomination, but these surge numbers tell us something about the wishes of the electorate on the Democratic side and among Independents.

For some people on the left Biden is not as aggressive as they would like.  He has problems that go beyond hair sniffing and being too handsy with the ladies that he will need to address, but he also offers some very important positives for a country that is sick and tired of Donald Trump, the deranged but diabolically canny drama queen and wannabe dictator in the White House.

Biden reminds people of the way government used to be.

Before Trump our government wasn’t perfect, but it was on the right track.  A lot of people in this country would give a lot to have the Obama administration back again so we could go on with our lives in peace, for crying out loud.  In the minds of many people Biden stands for the continuation, the reassertion, the reaffirmation of a progressive constitutional democracy.

There may be people who would prefer a flame thrower, but the majority of Americans are, I think, sick and tired of chaos and fireworks.  Biden is deeply caring and considerate in stark contrast to Trump.  His age can work in his favor because people know and trust him after his long career in politics.  He’s like the comfort food you go to to feel better.  Biden looks a lot fitter than Trump.  Trump looks like a physical wreck these days and seems to be flirting with dementia.  So that age argument is unconvincing.

It’s true that others might beat Trump too.  There was a poll Friday that showed other candidates beating Trump including Beto and Sanders edging out Trump, but Biden has the biggest lead over Trump and he enjoys the loyal support of the blue-collar guys who abandoned the Democratic Party to try Trump.  If the Dems can win those guys back again in Wisconsin, Michigan, and Pennsylvania, and even more places like Minnesota and Kentucky, Trump will be defeated because it will eat into his limited base.  Trump has played to a very narrow base.  He never pivoted to represent all Americans.  Biden would make him pay for that.

The only way to defeat Trump and Trumpism is to have a huge rebuke at the polls in 2020.

Biden could deliver that especially if he teams up with a vice presidential candidate who will infuse progressive potential for the future that Biden would introduce more in the role of an equal, a running mate who would have clout and authority.  I would personally love to see Kamala Harris be our next president, but I am sorry to say I think our backwards country is not yet ready for a black woman or any woman president yet.  Republicans make up about 36% of the electorate.  Dems are a slightly smaller group.  But neither side can win without the Independents.  If the nominee is a stretch for Independents, the result could be a narrow victory.  Above all we need a BLUE TSUNAMI to expel Trump from office.  Otherwise Trump will claim vote fraud and try to hold onto the presidency.  (He might try that no matter what happens.) Biden looks like the best bet to deliver the huge win we need to have because of his appeal to Dems and Independents.  If Republicans who are being held hostage to Trump see a huge rebuke from the electorate in 2020, Trump’s spell over them will be broken because they will want to save their party and themselves from being relegated to the trash bin of history.

Biden has the support of black women.

Black women are the backbone of the Democratic Party.  They know you can’t always get what you want in life but if you try you can get what you need.  What we need is a huge rebuke to Republicans.  Black women get that and they want to win in 2020.  Biden looks like the horse to bet on right now.

Biden could be trusted not to lie to us.

In Biden’s first rally, the biggest applause line came when he talked about how our country needs to have a leader who doesn’t lie all the time.  The American people know that Trump is a liar.  He has told over 10,000 lies and counting.  And most Americans hate that.  They hate being lied to.

Some people have pointed to Biden’s gaffes as a reason he would not be electable but that’s not going to hurt him in comparison to Trump.

But his innocent gaffes stand in stark contrast to Trump’s alternate universe of falseness, cover ups, and shameless subversion of people to his devious, paranoid plots against decent people.  AG Bill Barr is the most recent addition to Trump’s cohort of despicables.  Barr and Emmett Flood are currently trying to damage Mueller’s reputation so that when he testifies before the House the American people will not listen to Mueller and will discount his truthful testimony.  This is disgusting and shameful.  These sycophants have gone beyond politics and have entered the realm of pure evil trying to take down an American who has been a true follower of the laws, norms, rules and the Constitution, who tried to do the best job he could to investigate what happened to our country and has done outstanding work.

Biden will not scare the mainstream silent majority American voter.

Our country is still center right despite what you read on social media.  That is just the truth of the matter.  We don’t want to “die” with our leftist flags flying high only to usher in a second term for Trump.  Notice that Trump would be happy to have a Sanders or a Warren as his adversary.  That way he and his Republican allies could cry the sky is falling: “The socialists are taking over!” “Beat back the radical left wing!” Even if Trump doesn’t win with that fear mongering, a credibly left-wing candidate could make the election closer.  No one would believe soft spoken, compassionate Joe Biden is a radial left wing guy.  It kills Trump’s best argument against the Dems.

Trump is afraid of Biden for good reason.

He is tweeting about the firemen who prefer him because he fears Biden’s power with the same blue collar voter who swept him into office thanks to the electoral college we are stuck with.  Trump squeaked through with a measly 77,000 votes in the key Midwest swing states because of those blue collar working class “Trump triers”

Trump’s approval rating is not good, but it is still too high and the economy is strong, which means the election could be close with a less centrist candidate on the Dem side.

Trump is going to pull out all the stops to get re-elected so a victory for Dems has to overcome voter suppression and other dirty tricks by the GOP and Russia.

We know a sitting president is not supposed to be indicted if you follow the DOJ rule that Mueller followed.  But once Trump is out of office, he is going to be hit upside the head with over 20 lawsuits, and a number of them will be criminal indictments.  Trump could actually end up in jail where he belongs.  Trump plays dirty and he is going to have very incentive to play crazy dirty in this coming election.

Trump will likely have the help of the Russians as well.  He is clearly giving the wink and nod to Putin to help him again. In his hour long conversation with Putin by phone on Friday, he did not once rebuke Putin for attacking our election.  Instead the two of them yukked it up about the Russian hoax.  You better believe Russia is going to attack us again in 2020 to help Trump win.

That is another reason we have to have a HUGE win that is not close or contestable.

Even though I am making the case for Biden, I would not have picked him as my first choice for president.  I have personally met Mayor Pete and Kamala Harris.  These two people would be awesome presidents: smart, and capable with winning personalities and the ability to lead.  I wish our country were ready for either one of them to be president.  But above all I am a pragmatist.

It is true we are a long way from the election.  A lot can happen in 18 months.  But unless there is a sharp break from the trends we are currently seeing, Joe Biden could turn out to be our Mr. Right.  I hope you will keep an open mind about him.