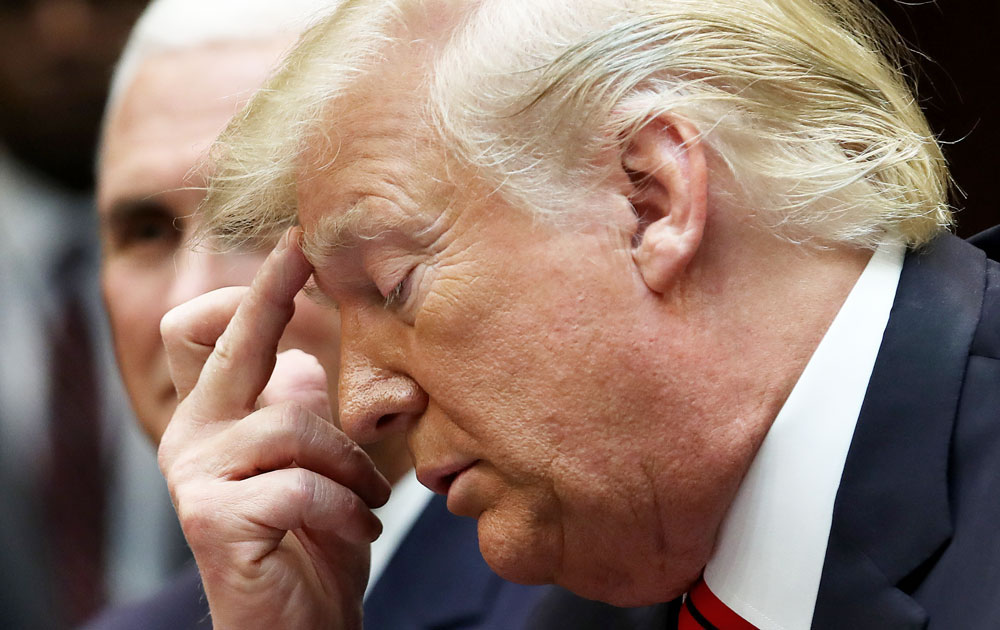 Next week starting Wednesday the House Select Committee will begin public hearings as Republican talking points in defense of Trump melt away.

First they told us the read out from the Ukraine call was “perfect”, but then it became clear it was far from perfect, in fact it was, on its face, an abuse of power and an illegal solicitation made of a foreign government to help out Trump personally by doing a hit job on his political rival, Joe Biden.

Okay so it was not perfect.  They moved the goal posts.

Then they told us there was no quid pro quo.  We heard that ad nauseum.  But information was coming out from the closed door hearings in the SCIF that reliable, career public servants who were first hand witnesses were saying there DEFINITELY WAS a quid pro quo.  Even Gordon Sondland who originally spouted the no quid pro quo line has had a sudden recovery of his lost memories.  Yes, there was a quid pro quo.   What was it? 1) a meeting with Trump and 2) close to 400 million dollars in military aid to fight off Russian aggression (a hot war on the east border of Ukraine) the president of Ukraine, Volodymyr Zelenskyy needed to “play ball” and that meant he had to “find a microphone” and tell CNN (tell the public) that he was opening a criminal investigation into Joe Biden even though there was no basis for doing that.  This was directed by Trump using Rudy Guiliani as his agent to make it happen for his own personal benefit to help him win re-election in 2020.

When the no quid pro quo argument fell apart, they argued the process was bad.  It was secret.  Republicans not allowed in the room.  Republicans showed up at the SCIF to protest the SCIF’s location and secrecy.  Oh, and order pizza- and they left pizza boxes scattered around the room like a bunch of spoiled frat boys.  It became clear that in fact over 40 Republicans already had access to the closed-door hearings and were participating in the questioning of witnesses.  They weren’t being kept out after all.  This protest was a nothingburger wrapped up in a bow to please Donald Trump.

So now what?  The argument that the proceedings are bad because they are secret has been knocked down.  Transcripts are being released to the public from the closed-door hearings.  500 pages of transcript are already released and much more is coming.  The Republicans are getting what they asked for- transparency.  And what do the transcripts show?  That the whistle-blower information was accurate.  There was a corrupt pressure campaign being run at the direction of Trump with Guiliani acting as his agent.  The purpose of that campaign was not to fight corruption but to get Ukaine to be more corrupt- to do Trump’s personal bidding. To do that they needed to get rid of Marie Yovanovich because she was the incorruptible ambassador to Ukraine who was getting in the way of Trump/Guiliani’s dirty dealings. The pressure campaign was also being worked to get the Ukrainian president to bend to Trump’s personal will and get him two valuable things- 1) an investigation that he could use to dirty up Joe Biden and 2) a Ukrainian server that Trump, a crackpot conspiracy monger, thinks is out there somewhere in Ukraine being secreted away by some oligarch or other that would show that the Russians were not the guys who meddled in our 2016 election, but, rather, it was the Ukrainians working hand in glove with Hillary Clinton.  (I know.  This is crazy.  What can I tell you.  Trump is a deeply sick, deeply paranoid guy.)

This weirdo server idea is a debunked right-wing conspiracy theory THAT WAS STARTED IN RUSSIA.  Trump totally believes this just as he believed the birther nonsense and Muslims dancing in New Jersey after 911 and so many more wacky ideas.  Paul Manafort fed him this conspiracy theory and Manafort also told Trump that Ukraine was not a viable country back when he worked for nothing for the Trump campaign.  Oh, hey, now we know why Manafort worked for nothing.  He was helping Russia.  We learned this from the released 302 interviews done by the FBI of Gates that also came out this week as the result of a FOIA request by Buzz Feed.

Where are the Republicans going now on their failing apology tour for Trump?  Following Trump’s lead, they are now going to try slandering everyone.  They are already attacking the whistle-blower, Lt Colonel Vindman and they have added Sondland because he told the truth instead of sticking with his lies that protected Trump but could have landed him in jail for lying to Congress.  Slander is the only playbook left for Republicans and Trump.  They will try to dirty up some of the most heroic, brave, patriotic Americans we have seen yet in Trump’s 3 years in office.  They are telling truth to power at great expense to themselves out of loyalty to our country.  Trump and his gang have nothing left but to try to get Americans to doubt what these public servants are saying.  He will claim they are Never-Trumpers when they are in fact apolitical.  This is the same playbook Trump always uses over and over again.  If you are caught dead to rights, then try to dirty up the guy who is calling you out and in the process scare everyone else into being silent out of fear.  Make them afraid to testify to the truth.  Intimidate the witnesses into being silent.

This approach is not going to work.  These witnesses are going to testify in televised public hearings starting next week.

Republicans who ride this train will eventually have to own Trump’s shit.  They are going to have to hold their noses and dive head first into the shitpile that Trump and Guiliani have created and claim it’s not shit.  It’s a bed of roses, can’t you see?  Good luck with that.

To defend Trump on the merits means they have to say: Yeah, he did it.  Yeah there was a quid pro quo.  Yeah forget about that process argument.  Okay okay it was wrong.  But it is NOT IMPEACHABLE.  Not that bad.  He was elected in 2016 and another election is coming soon so he should get to finish his term.  After all, there was no criminal investigation opened on Biden and Ukraine got their money.  No harm no foul.

That is a corrupt defense.

If you buy that position it means you “forgot” that 1) the only reason the money was released to Ukraine was that the whistle-blower report was coming out and the whole secret dirty deal was getting blown open by truthful witnesses coming in for depositions and 2) Trump and his team knew that what Trump did was illegal (extortion and bribery) and an abuse of power, a betrayal of our country for his own purposes, and corrupt because they hid the transcript in a secret code-protected server.

If the GOP defends the indefensible as they seem to be preparing to do, it means they do not care about the safety of our country.  Trump is a serious national security violation.  He puts our country at risk.  He puts Americans at risk.  And as Nancy Pelosi has said: “all roads lead to Putin”.  We have seen that there has been something very fishy going on between Putin and Trump since the beginning of Trump’s presidency.  Why does he have closed-door meetings (five of them) with Putin with only a Russian translator present- no notes made available to anyone?  What is he doing in those meetings?

Putin may be Trump’s good buddy but he is no friend of our country.  Putin’s goal is to damage and destroy our democracy and he has gotten pretty far already by helping Trump get elected with his Russian troll farms, his cyber-attack on the Dems carried out by his military intelligence officers and now that Trump is in the White House, Trump is de-constructing our democracy and damaging our standing in the world.  For example, Trump made it official: he is pulling us out of the Paris Climate Accord.  If Trump wins in 2020 we will leave the Paris Climate Accord the next day.  If Trump loses to any Democrat, we will stay in the Accord.  (If you needed any more reason to work as hard as you can to get a Democrat, ANY Democrat elected president!  here it is.) And Ukrainegate was also designed to help Putin – had it not gotten blown up by the whistle-blower and the testimony from truthful public servants, Ukraine would have been deprived of military support to beat back the Russians even though Congress had approved the funds and Ukraine’s attempt to be a corruption free democracy would have been damaged as well to the delight of Putin.

Stay tuned.  Get your popcorn popper ready.  This is all about to come out in open hearings.  This is about to get very very interesting.