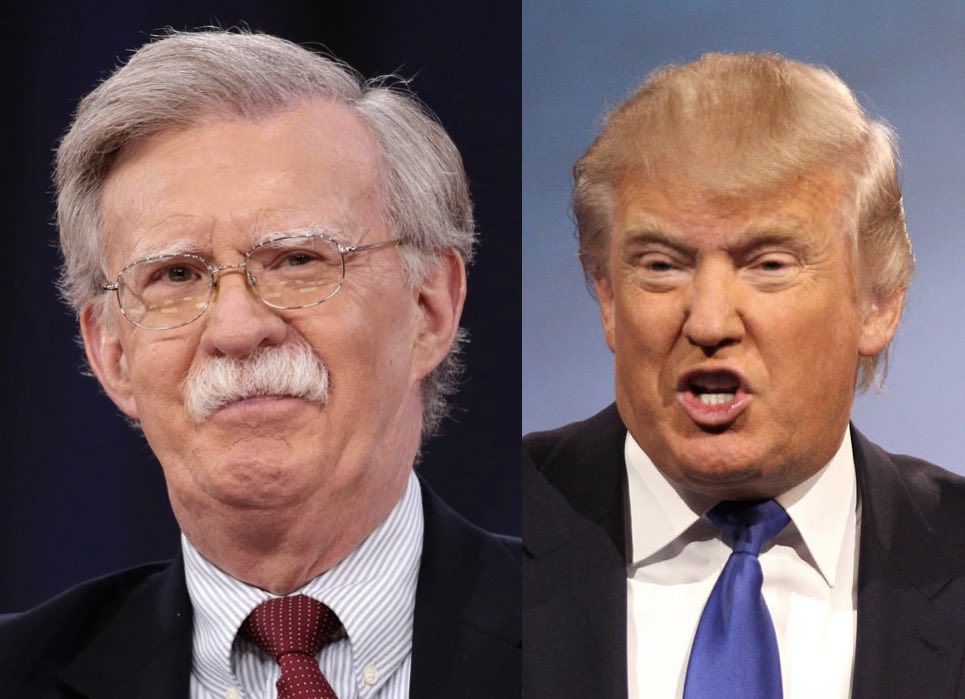 To those who have been following the impeachment hearings in the House and now the Senate impeachment trial, Sunday evening’s revelations in the New York Times that the manuscript of National Security Advisor John Bolton’s soon-to-be-published book contained a description of an August, 2019 conversation in which the President confirms that he was withholding military aid to Ukraine until the Ukrainians provided him information about the Bidens was not a big surprise. Based on the evidence collected in the House, Bolton was one of several high-ranking administration officials who clearly had to have discussed the freeze of military aid with Trump. The Senate Democrats had already included Bolton as one of four witnesses whose testimony and related documents were crucial to the Senate’s task — to impartially judge the President based on the evidence.

What is now being called “the Bolton Bombshell” did, however, derail the carefully crafted path Mitch McConnell and Trump’s legal team had plotted to avoid further fallout from Trump’s Ukrainian shakedown. A story that initially captivated Washington and what has, if nothing else, now piqued the curiosity of the country. Efforts to bring the impeachment trial to a speedy end – – without new witnesses or evidence – – is now in jeopardy. The ultimate acquittal of the President on the impeachment charges is perhaps not seriously in doubt, but the final act is no longer the tightly scripted scenario planned by McDonnell. House managers and Senate Democrats now have a few more cards in their hands to play as they push for witnesses. No one is certain how things will turn out.

The White House lawyers’ arguments, to a large extent, gave most Republican senators a menu of excuses they could use to acquit the President. Most do not withstand close scrutiny, but they would be enough to appease the Republican base. The impeachment process was fatally flawed. It was a partisan witch hunt. Trump was denied due process. The charges do not allege any violations of criminal law. The President’s conduct was proper and within his rights. In the next two days of questioning by Senators, most of these defenses are likely to be rebutted by the House managers who have an arsenal of evidence and law to correct the record, perhaps not for those senators who have made up their minds, but for the broader audience of American voters.

One of these defenses, however, has become radioactive in light of the Bolton disclosure. Over the weekend, the President’s counsel hammered home their claim that none of the House witnesses were present when the President expressed any intention to withhold military aid until the Ukrainians agreed to investigate Joe and Hunter Biden or to investigate the supposed Ukrainian involvement in the 2016 election. Even for these masters at the art of deception, it was a bit of a stretch. All of the circumstantial evidence, as well as the testimony of Gordon Sondland, all pointed to the fact that no one except the President could have ordered the freeze. But now, Bolton could provide direct evidence – – a conversation with the President shortly after the crucial July 25th call. As Representative Adam Schiff said, the President’s lawyers’ own arguments provide the best reason for the Senate to call witnesses.

On Tuesday night, after two Republicans, Mitt Romney and Susan Collins, expressed some interest in hearing from Bolton, word “leaked out” of a Republican conclave that Majority Leader McConnell was a few votes short of the fifty-one needed to block any call for witnesses. This seems little more than a head fake to distract us while McConnell and his leadership team whip up the needed majority to block further evidence, but Bolton’s potential testimony presents a new problem for those Republican senators facing re-election. Each can now choose from a variety of grounds for acquittal provided by White House counsel. But what do they say to voters if they do not allow witnesses? Recent polling confirms that an overwhelming majority of registered voters, 75% according to the latest Quinnipiac poll, favor calling witnesses. Even a plurality of Republicans now favor hearing from Bolton and other witnesses. Will this happen? Hard to say.

Some legal scholars have argued that the current impeachment rules permit the House managers to apply directly to Chief Justice John Roberts, who is presiding over the trial, to issue subpoenas for witnesses and documents, without first seeking permission of the full Senate. A literal reading of the Senate Rules in effect since 1868 support such a course of action. This would simply mean the witnesses would be summoned to the trial much like lawyers do in any other trial proceedings. Evidentiary decisions, such as determining if a witness has relevant testimony or determinations of the scope of the attorney-client or executive privilege, would still be made, initially, by Chief Justice Roberts. But under the Senate Rules, any evidentiary decision Roberts makes is subject to a majority vote by the Senate. Mitch McConnell’s efforts to corral reluctant senators for a simple up or down vote on whether to call witnesses could be replaced by individual votes to overturn specific decisions by the Chief Justice of the Supreme Court. Decision in which the chief judge of the highest court in the land found witnesses or documents relevant and admissible. Votes to overturn decision of the Chief Justice would be much harder for Republican senators facing re-election this year to explain.

There is, of course, the larger danger to Republicans that looms over all of these proceedings. Something underscored by the disclosures in the Bolton manuscript. How will the votes of these senators be judged by history? It should now be clear to everyone that this saga will not end when the trial is over. Investigative reporters will continue to uncover evidence of details of the Ukrainian shakedown or other administrative misconduct. Congressional inquiries will no doubt proceed, perhaps aided by new whistleblowers now prepared to come forward. There are an unknown number of shoes that could still drop. Will the fear that further revelations will put the spotlight back on their impeachment vote chasten senators to at least permit these witnesses – most of whom were at the scene of this train wreck — to testify. Or will Mitch McConnell round up the fifty-one  votes needed to give Trump the quick victory he has been hoping for? The moment of truth may come on Friday.

If the most recent news reports are correct and Mitch McConnell has now marshalled enough Republican votes to defeat a Democratic motion to call witnesses, this may alter the House managers’ and Democratic Senators’ strategy, at least slightly. When the outcome was more uncertain, both Adam Schiff and Chuck Schumer expressed a desire to go ask for a full Senate vote to call witnesses to testify, rather than asking the Chief Justice to merely “issue” subpoenas. If they thought the Chief Justice would issue the subpoenas that might be an option since they would then be voting against the Chief Justice.  On the other hand, if Roberts wants to stay above the partisan fray, he could find a way to refuse to issue any subpoenas. This might allow Republicans to say, “See, the Chief Justice doesn’t even think we need to hear witnesses.”

Chuck Schumer is now promising some parliamentary maneuvers to delay the vote on conviction of acquittal, but it looks like the trial will end with no witnesses.  Regardless of how the end game plays out, the Republican senators will soon be on record as aiding in the cover-up of Trump’s extortionate conduct, denying the American public a full accounting. The only good thing that comes from the Republican vote to bar witnesses is that the senators up for reelection are not going to be able to say, “Look, I voted to hear witnesses but did not think this conduct warranted removing Trump from office.” The message to voters in November will now be clear: Republicans will do nothing, absolutely nothing, to hold Trump accountable.  That fact alone should be reason enough to vote them out of office.

Patrick E. Deady is a former federal prosecutor who worked in the Civil Rights Division of the U.S. Department of Justice and in the U.S. Attorney’s Offices in Chicago and Baltimore.

He is now head of the litigation practice of Hogan Marren Babbo & Rose, Ltd. in Chicago. He is a contributor to WBEZ, the Chicago Public Radio Station, Cheddar TV and a number other media outlets.